A garden journey into a quilt 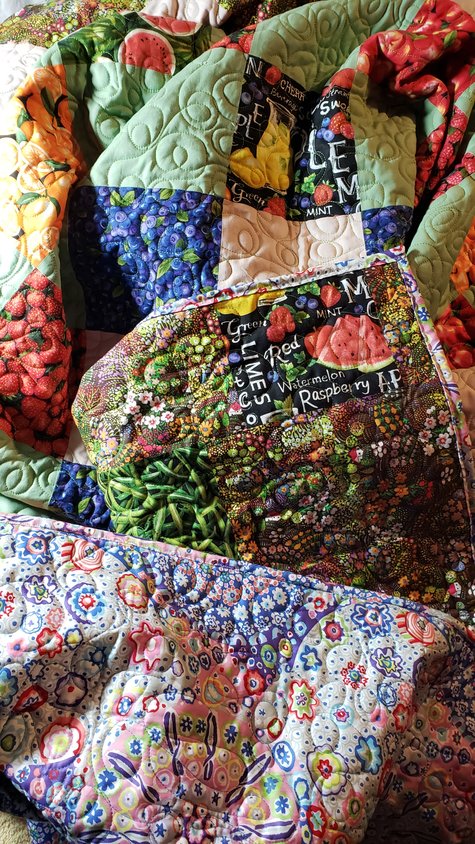 The Finished Quilt shows a section of the blueberry and light beige 9-patch center surrounded by the brightly colored fruits and vegetables of Farmer John's Garden Party and the Pastel Millefiore backing and binding.
Photo by Mia Kalish 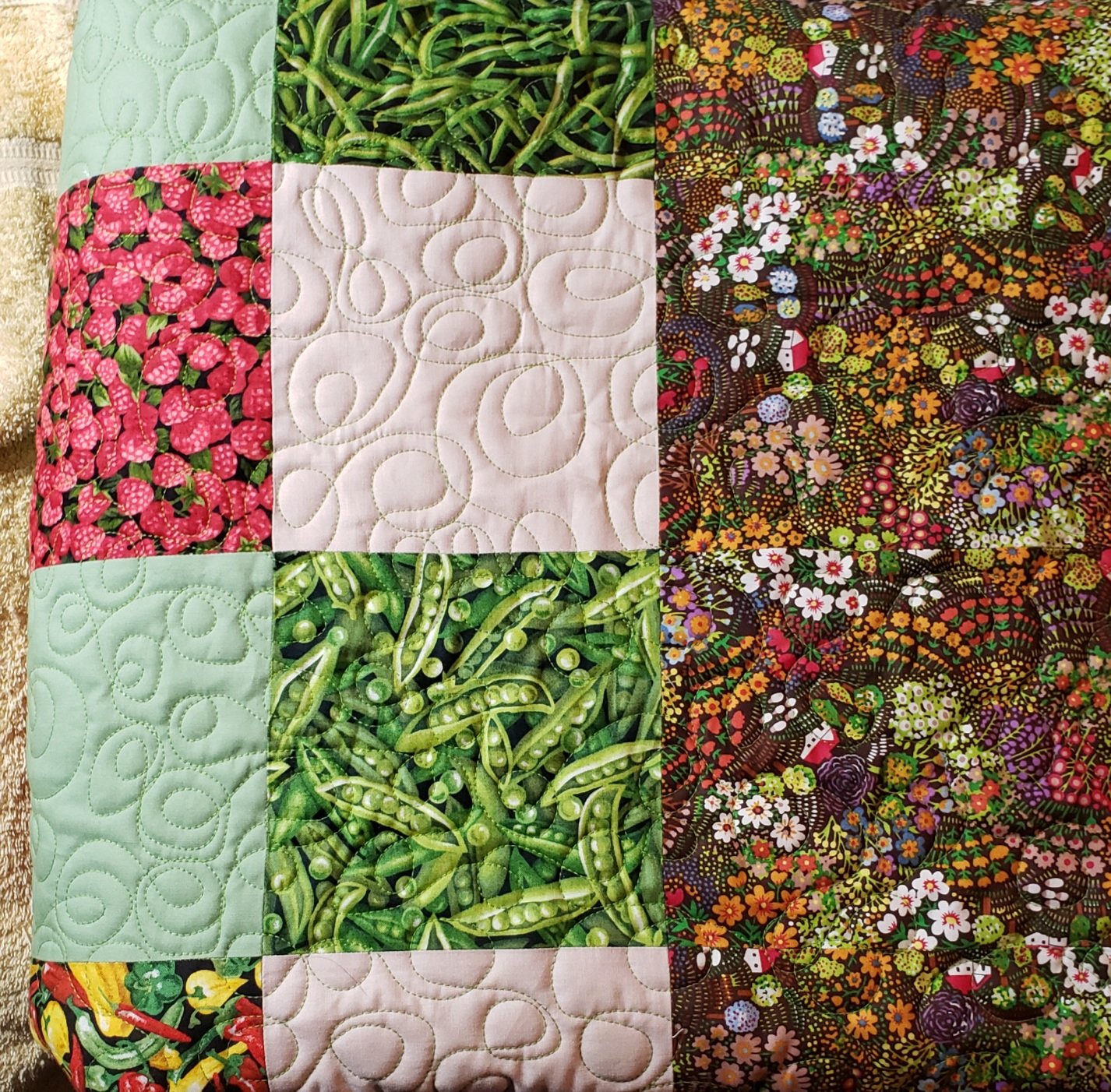 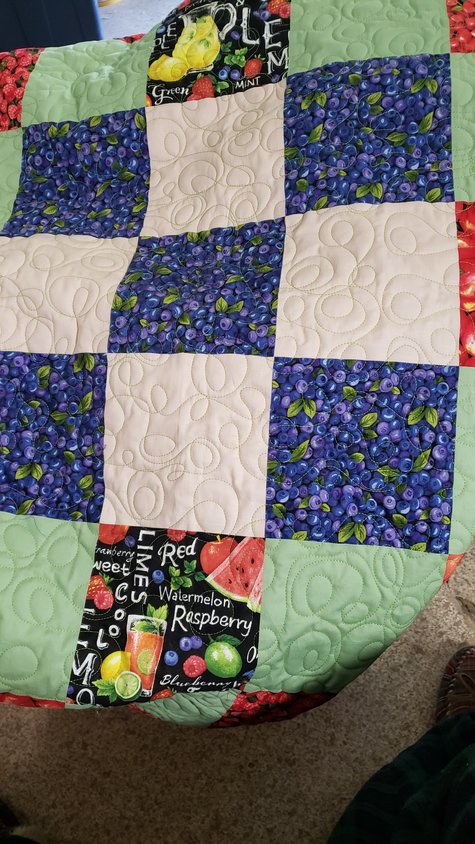 The Blueberry and light-beige center surrounded by light green squares and highlighted top and bottom by the “poster” squares, which also adorn each corner.
Photo by Mia Kalish
Previous Next
Posted Monday, January 31, 2022 4:41 pm
By Mia Kalish

Many people, especially those who have been gifted with a gorgeous quilt, marvel at its beauty, warmth and softness, but don’t often wonder, how did this come together?

Over the centuries, the technology by which quilt designs are shared has changed, from close contact with other quilters, to patterns in newspapers, to quilter-focused books and magazines and now to television and online videos.

In today’s fast-paced world, one of the great masters of quilting design is Kaffe (rhymes with safe) Fassett, who went from painter to one of the most famous textile designers over the course of his lifetime. One reason for his popularity among quilters – and the recipients of quilts made with his fabric and quilt patterns – is his willingness to be bold, to design out-of-the-box and to share his ideas willingly and generously with others.

Some of this philosophy from his popular book “Glorious Knitting (1985),” worked for me as I was finishing a special anniversary quilt for my cousin’s daughter and son-in-law. And I think this quilt turned out to be as unusual as some of Kaffe’s quilts. Here’s how it happened.

The happy couple are farmers in New Hampshire and my cousin had said, “Anything green and they will love it.” While surfing the web for fabric options, I found Farmer John’s Garden Party. It had raspberries, cherries, apples, lemons, oranges, and for veggies, green beans, mushrooms, onions and olives. It was not green, exactly, but very agricultural. I chose a pattern that was blocks of print fabric.” alternating with solids that might resemble an actual garden.

The center is what’s called a 9-patch, three squares across, three rows down, made of blueberries combined with light beige squares. The fruits and vegetables were then combined with a soft green to surround the center for four additional columns on each side and five additional rows top and bottom. This rectangle was then surrounded by a border of alternating light beige and yellow and green fruits and vegetable squares.

And then, there was only one problem: to the Kaffe fanatic in me, the quilt just didn’t look “alive.”

Kaffe’s motto from “Glorious Knitting” came to mind as I regarded my poor baby with a quilter’s dismay: “When in doubt, add 20 more colors.”

I was lucky enough to find Wilderberry Haus, in chocolate, from Alexander Wilder, designed by Nicole de Leon for Alexander Henry Fabrics.

This fabric is in the same theme as the overall quilt, but on a much smaller scale than the Garden Party prints, with little buildings that could be farmhouses or barns or cottages surrounded by a profusion of brightly colored flowers. It brought the quilt top to life, creating movement away from the static garden.

And then, inspired by my new changes, I selected Kaffe’s wide back Pastel Millefiore for the backing, a totally wild selection considering the somewhat conservative top.  I chose a spring green thread for the top and a bright cobalt blue thread for the back, finishing this queen-sized magnificence in flowery swirls on the longarm, a quilting machine designed to handle large pieces.

The quilt was finally finished on the day after Thanksgiving, complete with wool batting to protect against the New Hampshire winter chill, and posted north, arriving just in time for the first snowfall.