Who do you carry?

Honoring the memory of those who served 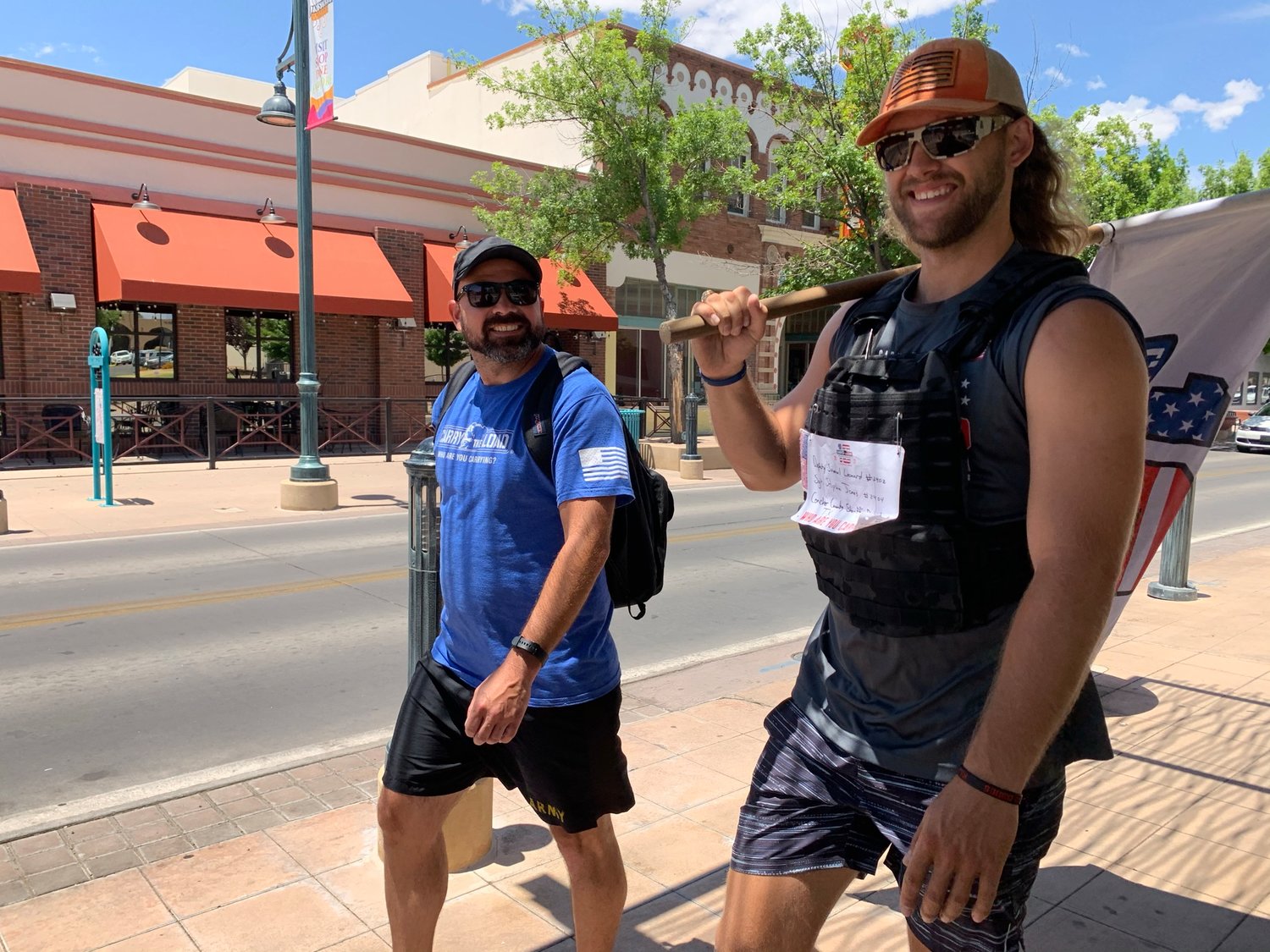 Rocky Everett and Jason Diggins “Carry the Load” through Downtown Las Cruces as part of the nonprofit effort to recognize veterans and first responders who have lost their lives. The Carry the Load events has four relays that converge in Dallas for Memorial Day. The West Coast Relay, which came through Las Cruces May 18, started in Seattle.
Photo by Elva K. Österreich 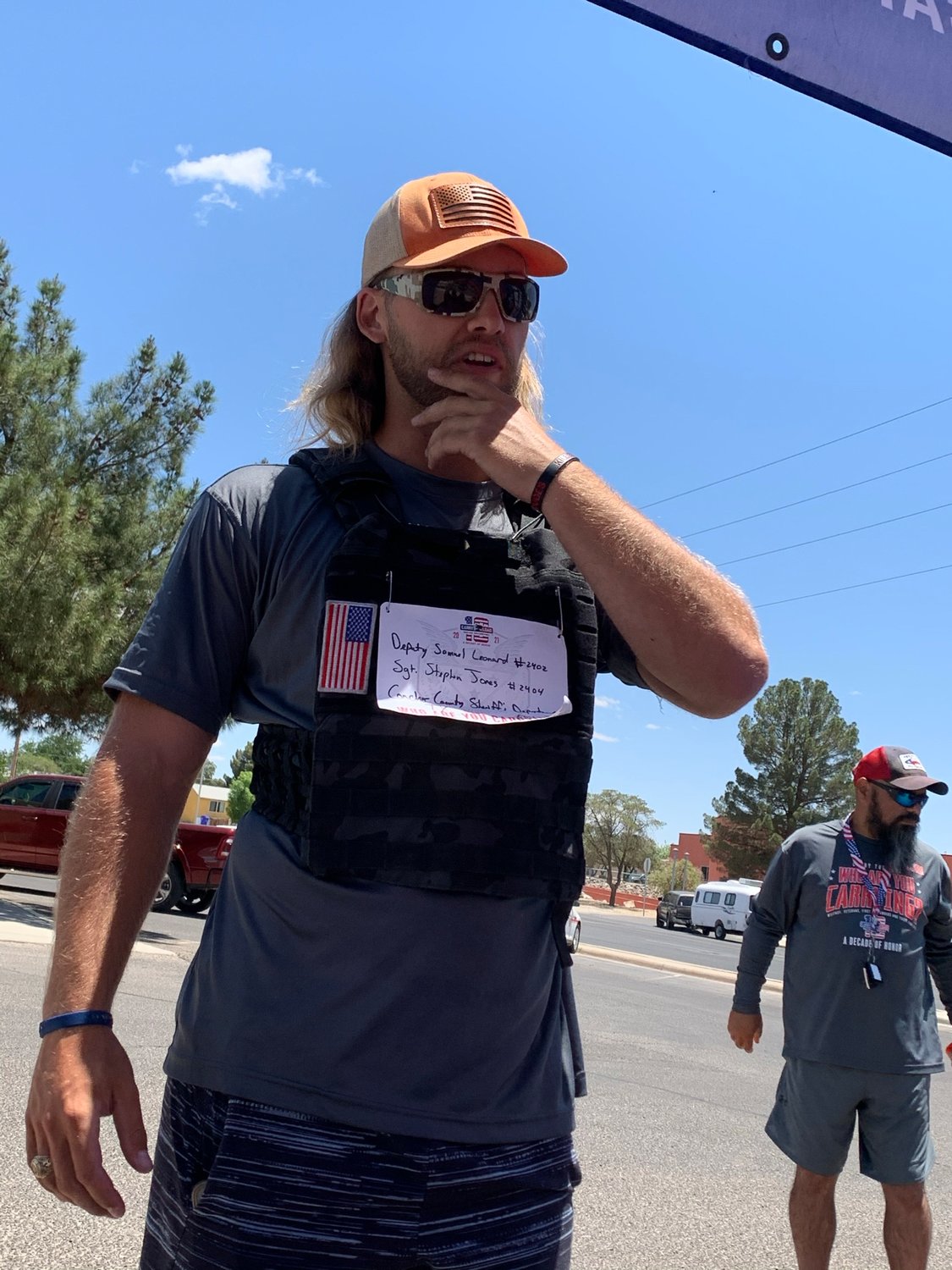 Jason Diggins, participating in one of the Las Cruces legs of Carry the Load relay, is wearing a bib with the names of two sheriff’s department officers who lost their lives in the line of duty.
Photo by Elva K. Österreich 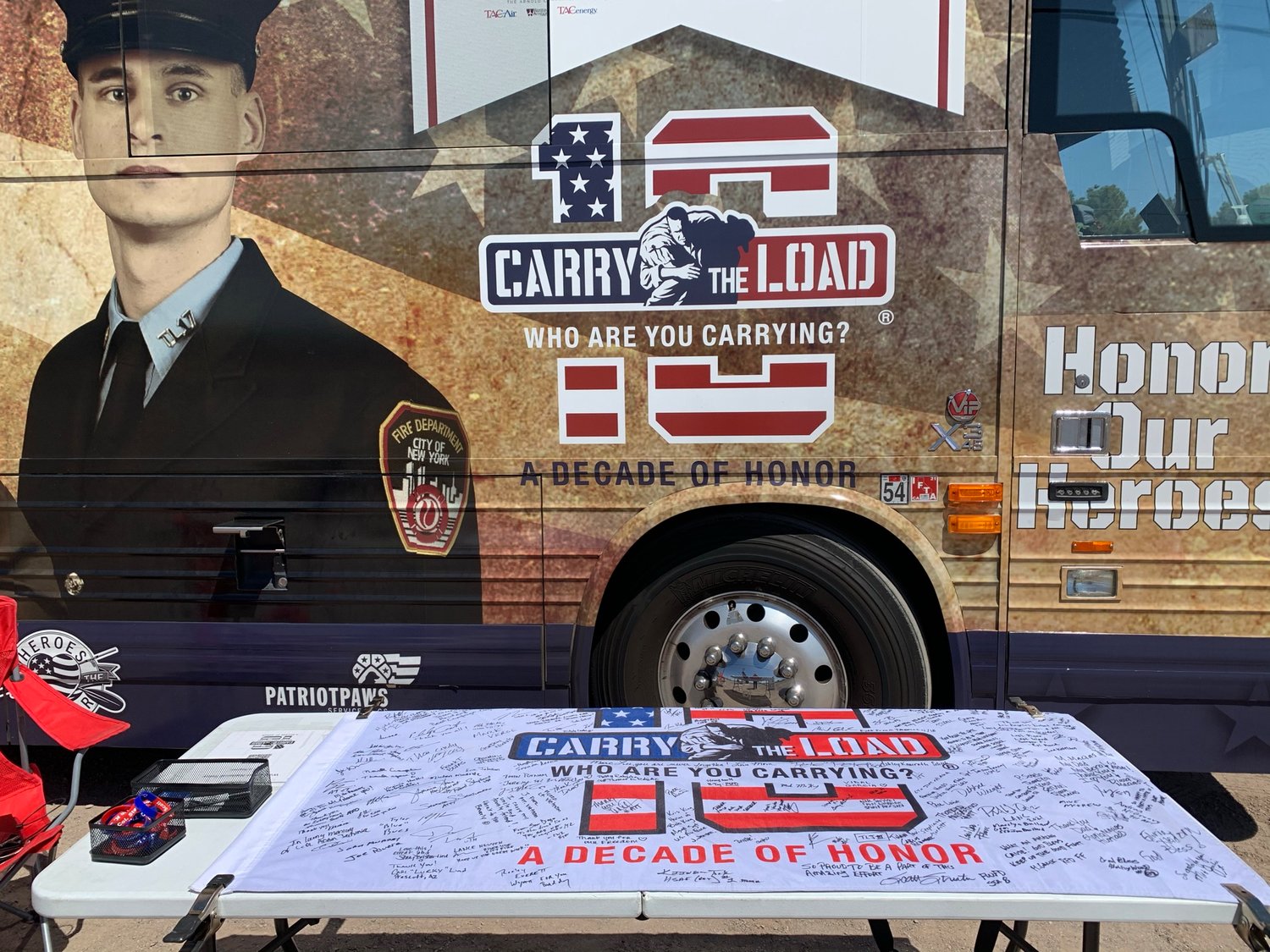 At an information station, a flag to be carried on the relay and the Carry the Load bus display the intent of the relay project to honor veterans and first responders who have lost their lives.
Photo by Elva K. Österreich 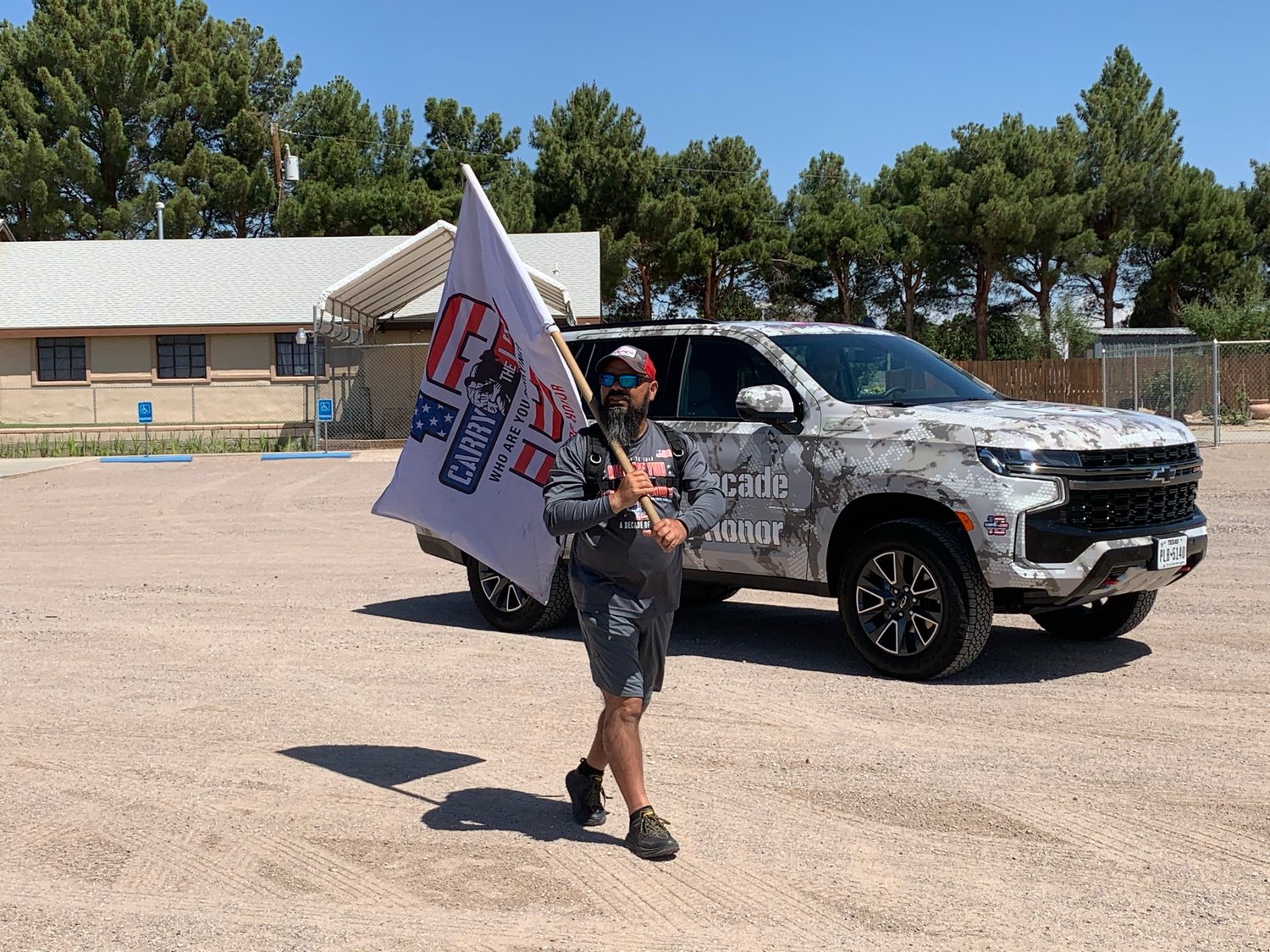 Andy Medrano sets off through his leg of Carry the Load, which takes him through Las Cruces to the Downtown fire station on Picacho Avenue.
Photo by Elva K. Österreich
Previous Next
Posted Thursday, May 27, 2021 10:20 am
By Elva K. Österreich

Relay manager Michael “Goldy” Golden is part of a mission to bring back the true meaning of Memorial Day.

“The purpose of what it’s about gets lost sometimes,” he said.

In 2011, a couple of Navy SEALS who had lost several friends were disturbed about the way Memorial Day was handled, Golden said.  They put backpacks on, put weights on their packs and started walking. They walked around White Rock Lake in Dallas and had some friends join them.

In 2012, they decided to have a relay and walked from West Point, New York, to Dallas, more people joined them and Carry the Load was born. The group became a nonprofit that provides active ways to connect Americans to the sacrifices of the nation’s military, veterans, first responders and their families. Carry the Load has turned into a worldwide movement to honor and remember the nation’s heroes, and now has four different relays across the country.

In 2016, the organization opened up the West Coast Relay, traveling 4,600 miles from Seattle to Dallas in 32 days, Golden said as he and other organizers made stops in Las Cruces on May 18.

They left Seattle on April 29 and will arrive in Dallas May 30. The four relays will meet up and hold a rally.

“We meet incredible people along the way,” Golden said. “From a personal perspective, it gives you the feel of what America is really about.”

Media coordinator Meagan Heathcott said she has always had a deep appreciation for those who protect others.

“It’s important to me and our team to celebrate their life and to honor their sacrifices and to continue to make sure they are not forgotten,” she said.

The team provides support for those on the relay, making sure they are hydrated and have all they need.

“Whether we have a group of one or a group of 30, we make sure they are safe,” she said.

Golden said in 2011 when the event started, when those two guys started walking, an older gentleman looked at them and asked, “Who are you carrying?,” because he could see they had a purpose and he could see there was a mission to what they were doing.

“It was the perfect phrase,” Golden said. “So now we ask, ‘Who can we carry for you? What’s your story? Who are you carrying?

“Ultimately we want people on Memorial Day to remember someone who has served. We expanded; we include first responders as well. Without them taking care of our veterans’ families at home, our service members couldn’t do their jobs.”

He said Carry the Load has bibs they put the names on and participants can carry them on a segment of the relay. Each segment is 2 to 4 hours long.

“Most people do have someone in mind to carry, whether it’s their family or a loved one or somebody they have connections with,” Heathcott said. “And we do display our storyboards. Anybody is welcome to join and keep our stories alive.”

Walking on one of the legs through Las Cruces, Jason Diggins’ carries the load of Deputy Samuel Leonard and Sgt. Stephen Jones of the Concho County, Texas, Sherriff’s Department, who were killed several days earlier when responding to a dog disturbance when a man came to the door and shot them.

Up to this year Carry the Load has raised more than $26 million, Golden said. This year, the goal is $1.25 million and well on its way. The organization does not directly provide services but rather has organizations that apply to them and receive funds.

For example, he said, 22 Kill is an organization that addresses veteran suicide. The name comes from the statistic that 22 veterans a day were killing themselves in the United States.

“Last I heard, that number is down to 17,” Golden said. “So 22 Kill and organizations like it are having an impact. Still even 17 per day is too much.”

Carry the Load's mission is to provide an active way to honor and remember the nation’s heroes by connecting Americans to the sacrifices made by the military, veterans, first responders and their families. For more information, visit www.carrytheload.org.