The Woman Who Kept Track 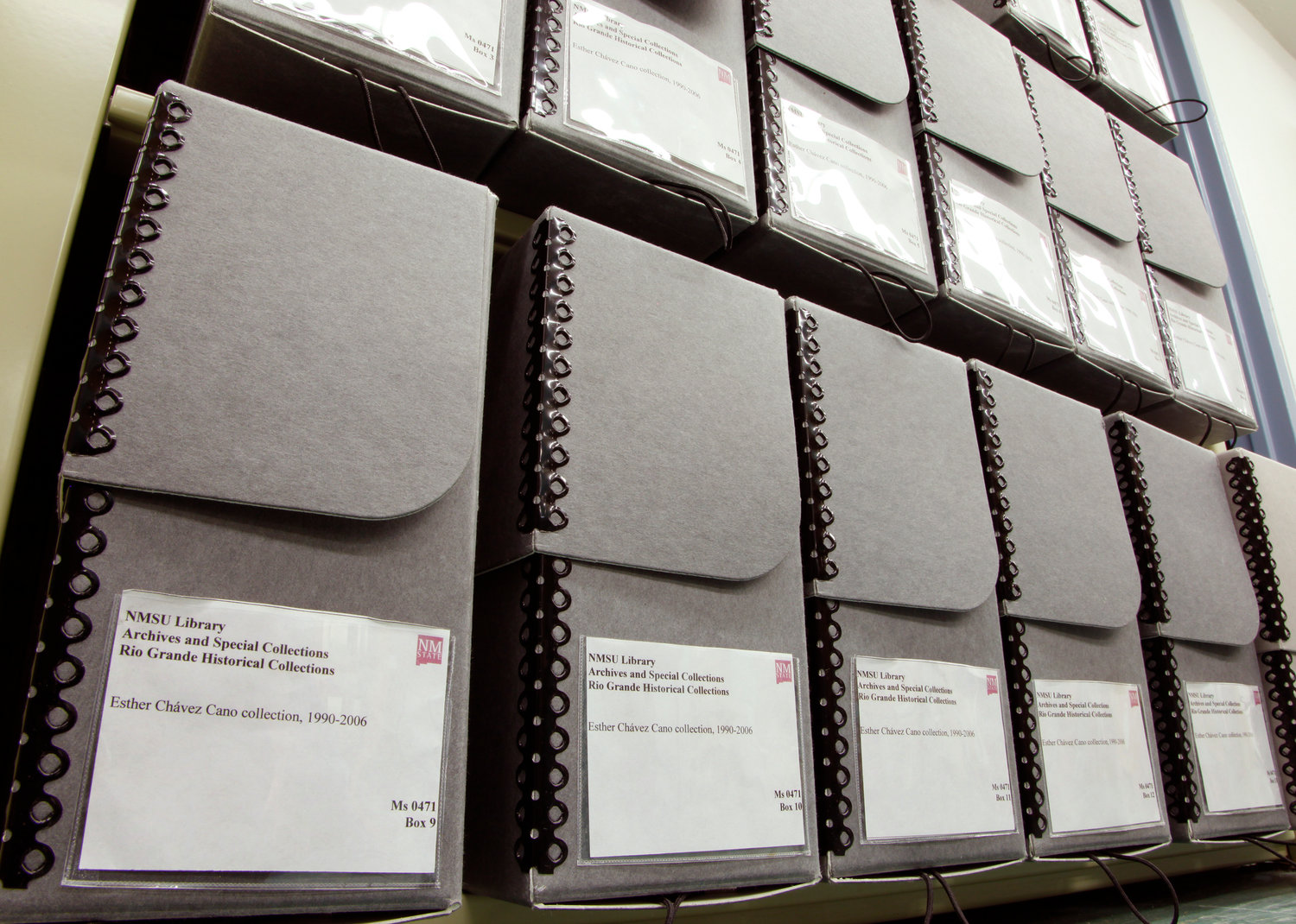 Collection of documents part of the Esther Cano Chavez inside the Rio Grande Historical Collections at NMSU's Library Archives and Special Collections Department. Cano gathered newspaper clippings, magazines and photographs documenting the murders of women and girls, referred to as “Femicides” in Juarez.
NMSU photo by Dennis Daily 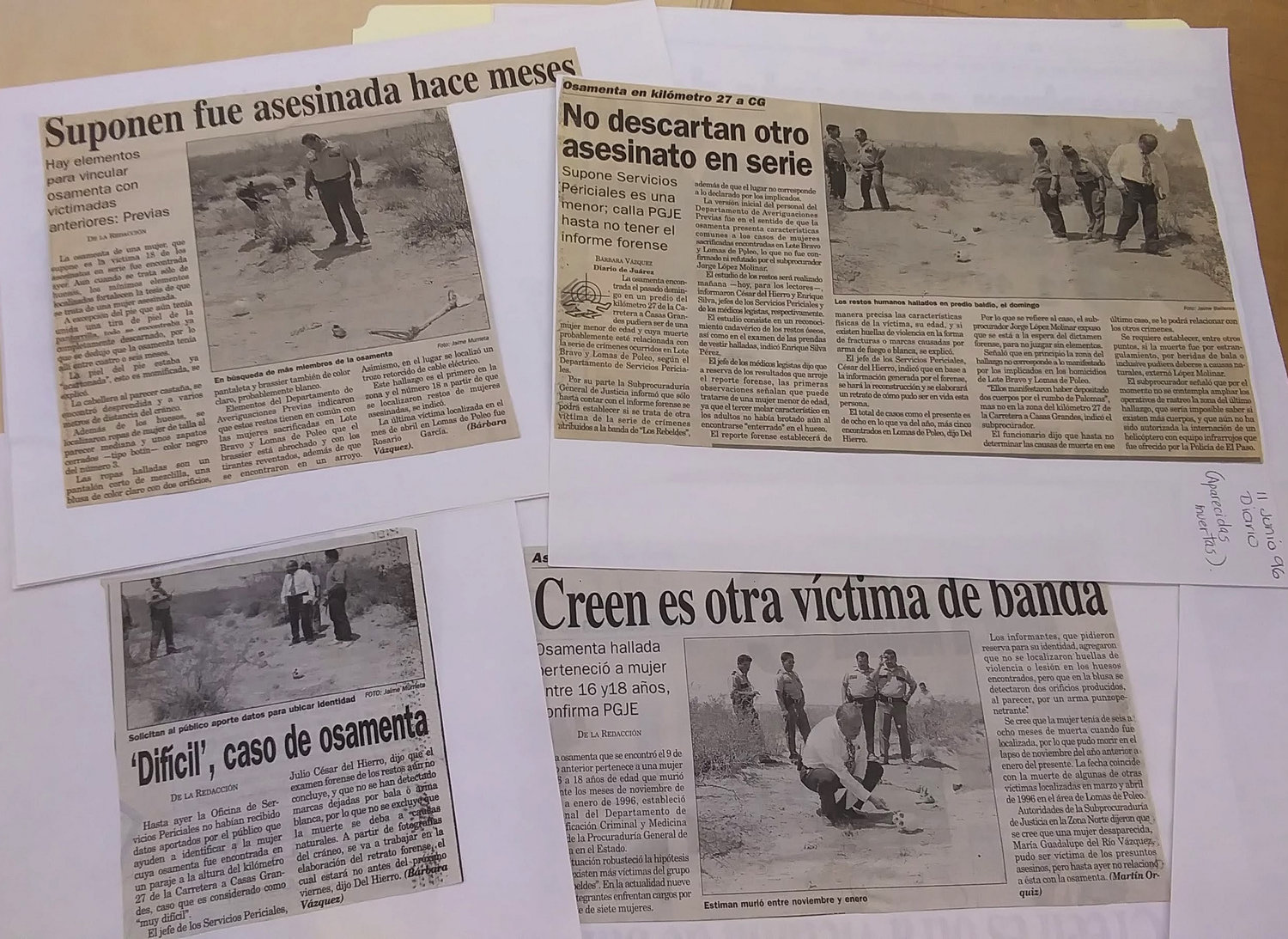 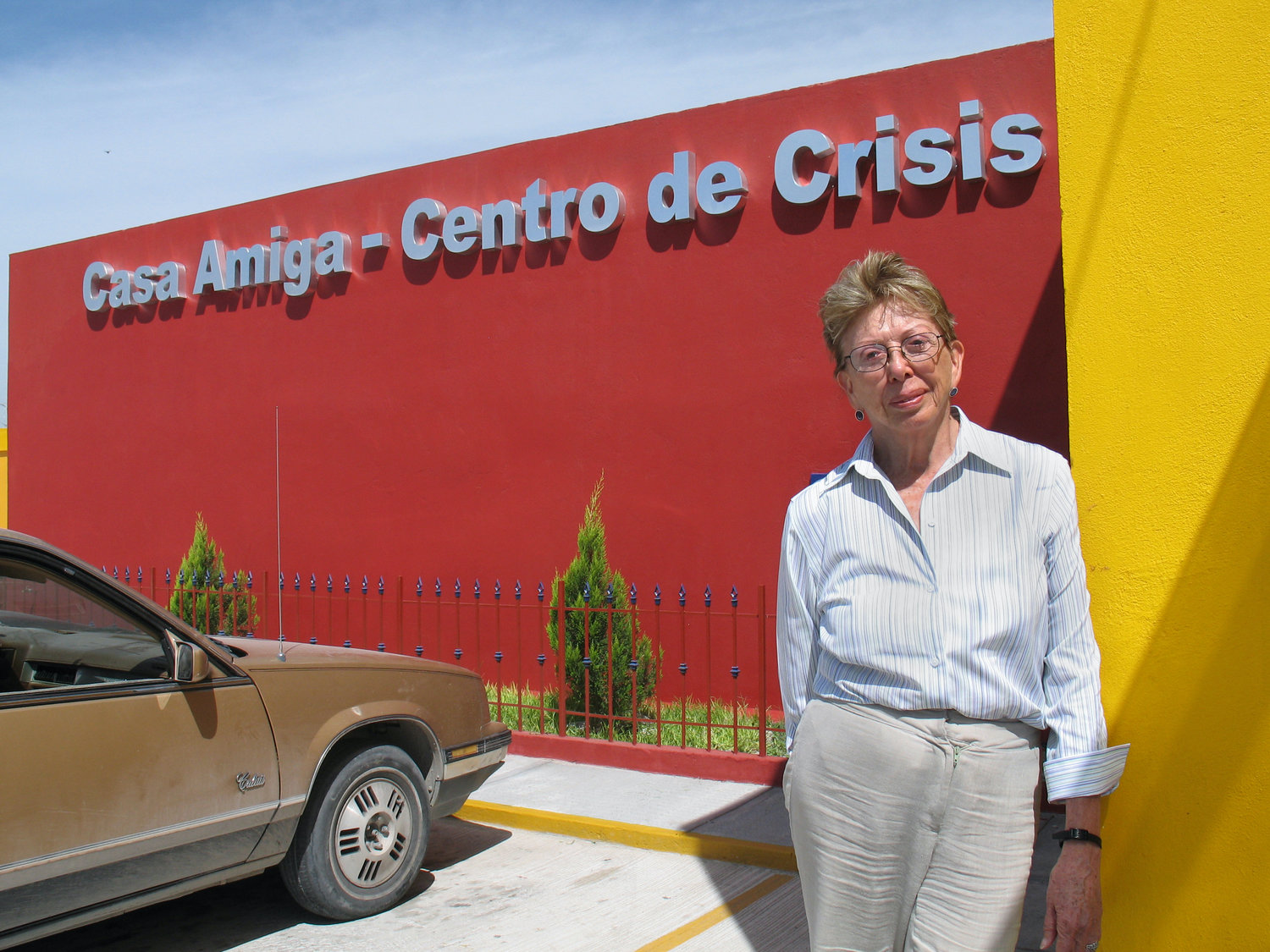 Esther Chavez Cano in front of the women's shelter she founded.
Previous Next
Posted Thursday, April 1, 2021 7:12 pm
By Amanda Adame

In the early 1990s, growing numbers of women were reported missing or found dead across the city of Ciudad Juarez, Mexico. Decades later advocates have documented more than 2,000 women were murdered yet none of their killers have been identified or convicted, according to the Center for Strategic and International Studies.

One woman dedicated her life to telling the stories of those women, turning over her collection of documents to the Rio Grande Historical Collections at New Mexico State University’s Library Archives and Special Collections Department.

Esther Chavez Cano gathered newspaper clippings, magazines and photographs documenting the murders of women and girls, referred to as “Femicides” in Juarez. Over the years, she had loaned out materials from her collection that were never returned. Cano thought the collection would be safer and more accessible in a library.

Born in Chihuahua in 1933, Cano was the oldest of eight children. In 1951, Cano studied accounting in Guadalajara and served several executive positions with different Mexican and international businesses for more than 40 years before dedicating her time to the issue of women’s rights in Juarez. Cano founded the women’s advocacy group “Ocho de Marzo” along with Casa Amiga, the first Juarez women’s shelter for victims of physical or sexual abuse.

Cynthia Bejarano, NMSU regents professor in the Department of Interdisciplinary Studies.
contacted Molly Molloy, who at the time was the Border and Latin American Studies Librarian. Molloy helped to start the process of physically transporting the collection to NMSU.

“I visited Esther at her home in Juárez several times to learn more about her materials,” said Molloy, who retired from NMSU in 2019. “I worked with archivist Dennis Daily who traveled with me to Juárez to bring the boxes back to the library.”

In late 2006, seven large plastic file boxes from Cano’s home made the trip to Las Cruces to join other special collections at the NMSU Library. However, it was not until archivist Charles Stanford joined the faculty in the Fall of 2007 that the collection was processed and made available to the public. Since then, dozens of researchers have accessed the collection.

“Because we are a public state institution, her materials will be preserved for many years into the future and they will also be accessible to scholars from anywhere in the world,” Molloy said. “We hope that the preservation of these materials at NMSU will make it possible for this history to be accessible to all researchers now and in the future.

Recently, Monica Ortiz, a freelance reporter for the El Paso and Juarez region, co-hosted a 10-part podcast series produced by iHeart Radio with producer Oz Woloshyn utilizing Cano’s collection and expanding on gender-based violence. The series has had more than three million downloads.

“Esther Chavez Cano's archive at NMSU was critical to our work,” Ortiz said. “The articles offered painful but important insights into the violence that's become so pervasive in Ciudad Juárez.”

Cano continued to add to her collection until her death on Christmas Day in 2009 after a hard-fought battle with cancer. Cano’s collection and her enduring legacy lives on in the university archives.

“Esther’s collection reminds us of the historical impact that gender-based violence has in urban and rural settings, and especially as it relates to our borderlands region,” Bejarano said. “Thanks to Cano’s dedication and commitment to justice for the murdered women and girls of Juarez, their stories will not be forgotten.

“Words cannot express how fortunate and privileged we are to be the stewards of that collection.”