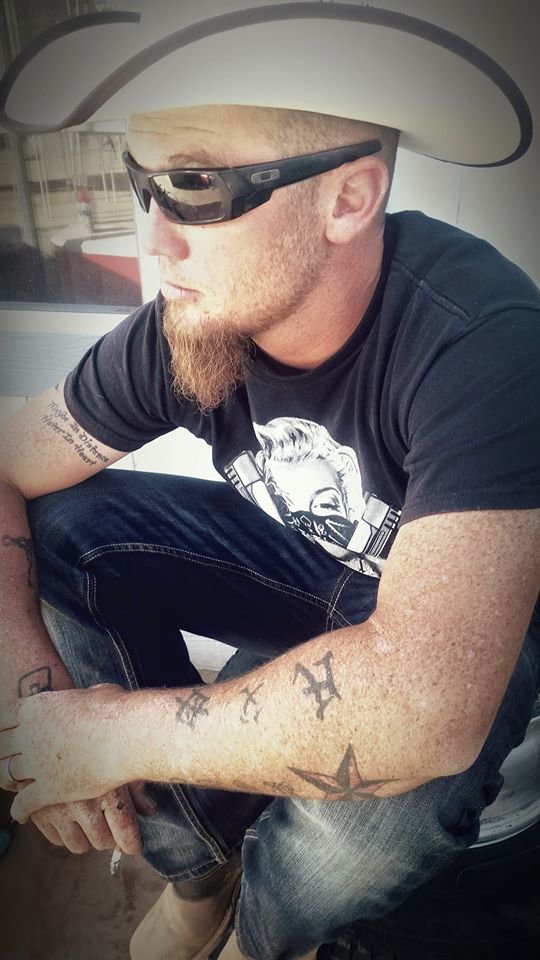 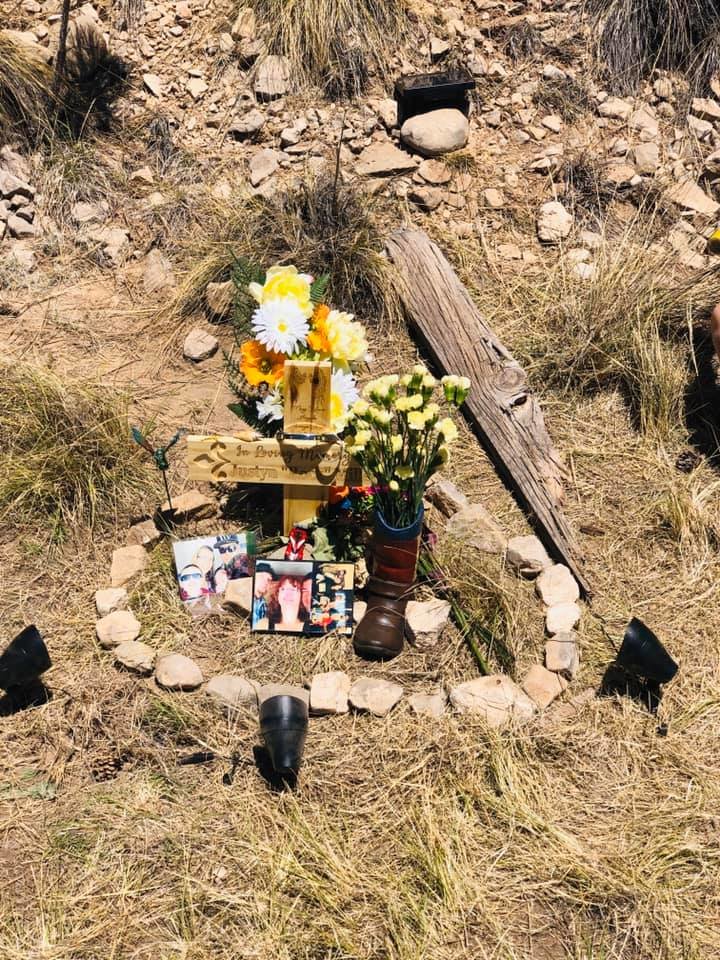 A roadside memorial dedicated to Justyn Miller who died on U.S. Highway 82 in April. 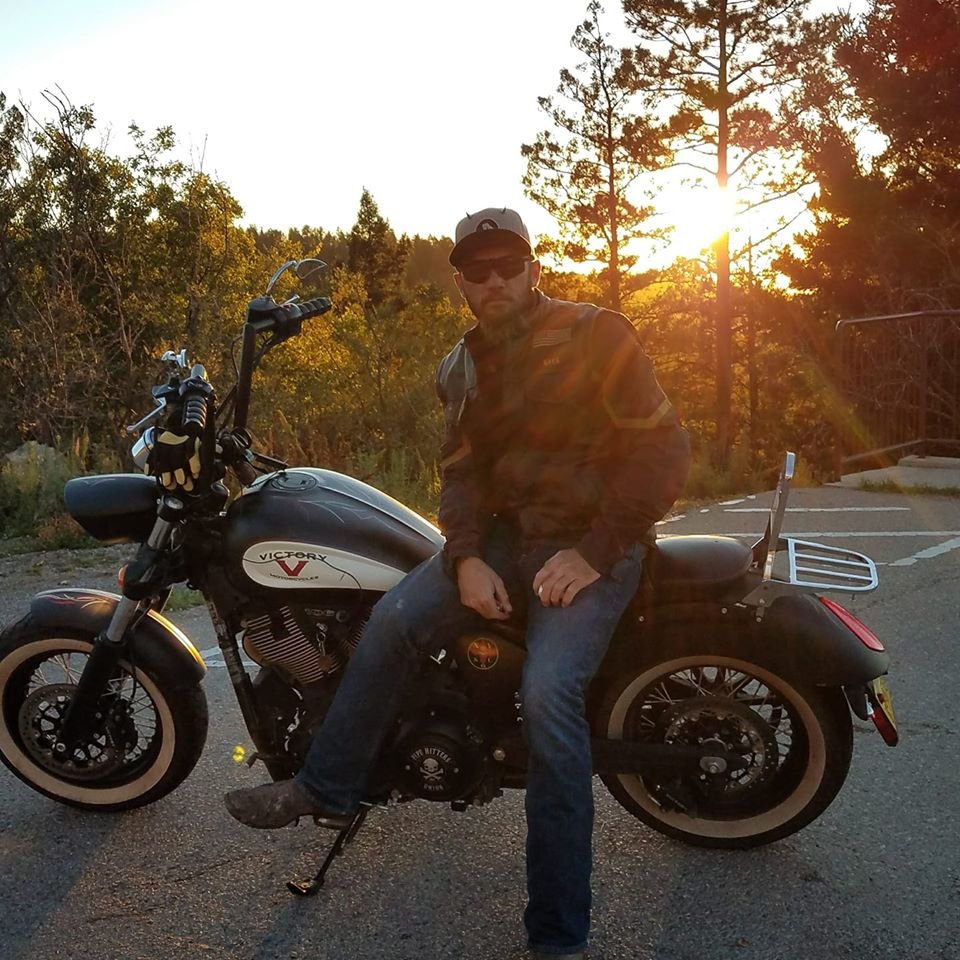 Miller and his motorcycle
Previous Next
Posted Friday, July 3, 2020 10:40 am
By Michael Shinabery

Imagine yourself as a law-enforcement dispatcher. The hours are long, and don’t expect a nine-to-five schedule. The stress is high. Your every action on the radio and phone is scrutinized. Maybe you save a life, and if you cannot through no fault of your own, there’s still the “what-if-I’d-only” thoughts that will never quite quit drifting around in your mind.

The job isn’t the best paying, either, but then dispatchers don’t really see the work as a job. To them, their efforts are a high calling.

So, you’re the dispatcher on duty on a lazy spring Sunday afternoon when the 9-1-1 line rings. In the Sacramento Mountains between Cloudcroft and Mayhill, on U.S. Highway 82, the caller says a motorcycle has left the road and struck a tree. Getting help to the scene is critical. You hurriedly but professionally dispatch law enforcement and EMS to respond.

In rural Otero County, medical and fire activity is performed by dedicated volunteers, many of whom will have to leave jobs and family, race to the fire station, and from there speed to the scene. On this afternoon you call for fire and rescue from the closest station: Mayhill. That done, maybe you say a quick prayer that help will arrive in time.

An Otero County sheriff’s deputy wastes no time in reaching the motorcyclist. State police soon follow. The deputy hurriedly assesses the situation; the outcome is, well, there’s really only one. The officer asks for a representative of the Office of the Medical Investigator, who arrives and pronounces the man dead at the scene.

Now the question is: Who is the decedent? Officials will need to notify relatives. There’s a duty to be done here. The officer retrieves the man’s wallet, extracts the driver’s license and then radios the dispatcher with the name.

Suddenly, the situation is no longer an “imagine if” scenario. Tee Mackewich is the Otero County Sheriff’s dispatcher on duty on Sunday, April 26. She has years of experience behind her, but with this one call she won’t need to contact his family. The six-foot, four-inch motorcyclist whom loved ones and friends called “a gentle giant,” is Justyn Miller. Mackewich gave birth to him 33 years earlier.

“The deputy radioed his driver’s license for them to run and it just fell apart from there,” Mackewich’s husband, Mike Mackewich, said. “Her heart was just broken.”

Compounding her grief is that only three days earlier, Tee Mackewich had to endure the five year anniversary of the death of another of her three sons, Bryan Miller, who passed away after an illness. And in yet another gut-wrenching twist of fate, Bryan’s widow, Mary, is the City of Alamogordo dispatcher who alerts the city’s AMR ambulance service. She had no idea who the victim at the accident scene was.

Mike Mackewich himself is a retired deputy from the sheriff’s department, and as a former first responder has experienced his share of carnage and devastation. For these personnel, much-needed grief counseling is readily available in such situations. Except for one small glitch; under federal law, dispatchers are not classified as first responders.

“No,” Mike Mackewich said, “they’re considered secretaries. That benefit is not available to secretaries.”

In Otero County, Tee Mackewich is fortunate, because this local government provides EAP (Employee Assistance Program) counseling to all employees. Not all counties across the country do that, however. Mike Mackewich praised Sheriff David Black and Undersheriff Sean Jett for stepping in to ensure his wife received the help she needed.

“They’ve been supportive of the situation,” he said.

The Mackewiches are spearheading a drive to change what they see as an unfairness. He pointed out the counseling benefit is not the only disparity. Because dispatchers are not considered law enforcement officers, they must work additional years before receiving the same retirement pay that those on the street receive for less years’ service. Dispatchers also must undergo background checks, pre-employment psychological testing and must attend an academy.

“They are subject to the same stresses, the same emotions that the police officers are,” Mike Mackewich said.

In 2018, the federal Office of Management and Budget categorized dispatchers as “clerical workers.” Public comments submitted at the time asking OMB to not classify them thusly went unheeded.

“It really needs to be done on a federal level to be effective,” Mike Mackewich said.

To get Washington, D.C. to sit up and take notice, he stressed the movement needs to start locally before advancing to the New Mexico Legislature. Constituent support would be paramount. If a bill is passed and signed by the governor, state lawmakers can then take the issue to the state’s congressional delegation. To that end, Amy Barela, Republican Party of Otero County chair, recently worked on a resolution that, if passed, will be a first-step. Titled “Resolution to Support Efforts to Change the Federal Occupational Classification of Emergency Dispatchers,” the document asks for the support of Otero County commissioners.

Two bills were introduced early in the 116th Congress addressing this very matter: S.1050 in April 2019 in the U.S. Senate, the “Supporting Accurate Views of Emergency Services Act”; and H.R. 1629 in March 2019, a like-titled bill known as the SAVES Act. H.R. 1629 is co-sponsored by U.S. Rep. Norma Torres, from California, who spent 17 years as a 9-1-1 dispatcher before election to public office. Several unions have endorsed the legislation, including the Association of Public Safety Communications Officials, and the American Federation of State, County and Municipal Employees, according to efficientgov.com. The websites govtrack.us, and congress.gov, reported both have bipartisan support but have yet to advance.

In reality, a majority of other states would need to participate as well. In mid-May, lawmakers in the New York proposed just such a bill.

A big part of what motivates the Mackewiches is that no one should have to go through what she has without an emotional safety net. Three days after the crash she visited the site to leave a memorial.

“As much as we are heartbroken,” Miller’s obituary cited, “he left the world doing his favorite thing, riding his motorcycle. Justyn was the kindest person you would have the privilege of knowing. If someone needed help, he would be first in line all the while saying ‘come on guys, let's get this done.’”

The Mackewiches hope that, in his memory, a groundswell of supporters will say likewise: “Come on guys, let’s get this done.”