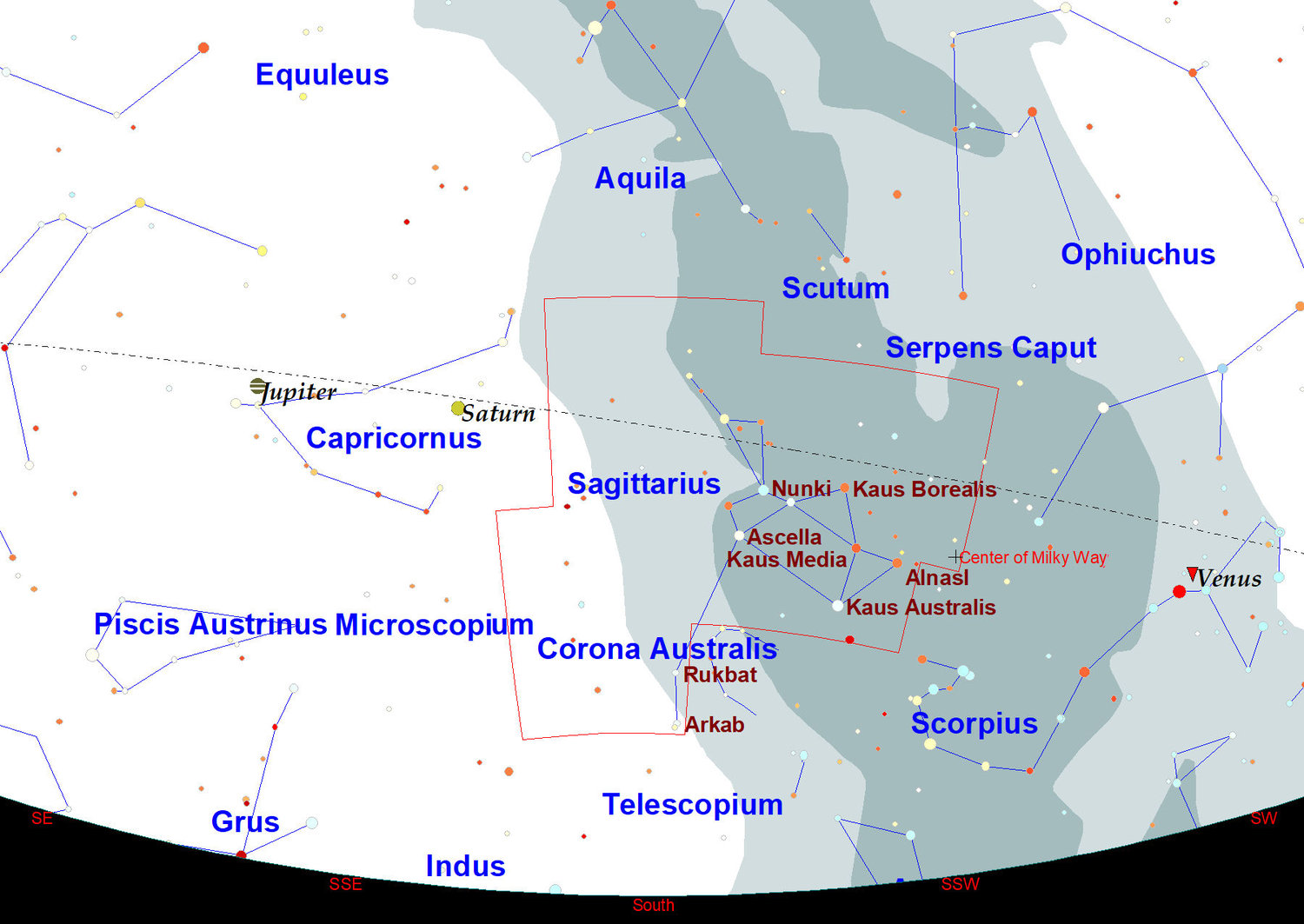 Sagittarius dominates the southern sky during these October evenings. It is easily identified by looking for the "Teapot" asterism that appears to be pouring out the Milky Way. The center of our galaxy is located at the far western end of this constellation. It also has many deep sky objects, since most of this constellation has the Milky Way running through it.
Posted Tuesday, September 28, 2021 1:41 pm
Calendar of Events – October 2021 (MDT)

0710 p.m.Mars on opposite side of the Sun from the Earth.

0910 a.m.Mercury passes between the Earth and Sun.

Above our southern horizon, an archer stands ready to fire his arrow westward toward the “Heart of The Scorpion”, the star Antares, in Scorpius, the Scorpion. But this archer is not a human, but a Centaur, a half-man and half-horse. This constellation is composed of at least 10 bright stars, making it easy to find almost a third of the way up in the southern sky.

Crotus was the son of the god Pan and the nymph Eupheme. She lived on Mount Helicon in central Greece. She was the nurse to the Muses and brought up her son among them, with Crotus assisting his mother in her duties. He was not only a skilled hunter, but greatly appreciated the Muses’ performances. To show his appreciation, he clapped his hands together, inventing applause. The Muses asked Zeus to put Crotus in the sky as Sagittarius.

Sagittarius is a large constellation, 15th largest area-wise in the sky. It is easily located in the southern sky by looking for the “Teapot” asterism (an unofficial grouping of star) near the constellation’s center. These bright magnitude two and three stars look like a teapot with a handle on the east side, a lid on top and a spout on the west side with the Milky Way pouring from it. The Teapot is unmistakable in the sky

Most of the Teapot’s stars are named, with the brightest being on the southwest corner of the pot, Kaus Australis (Epsilon Sagittarii). This magnitude 1.8 star is 144 light-years from the sun. It is a blue-white star of spectral class B9, almost seven times larger than our sun. It has reached old age, burning hydrogen in a sphere around its now exhausted core. The name Kaus Australis comes from the Arabic for southern bow. A sun-sized companion orbits it at a distance of 106 times the distance between the Earth and the sun, well beyond Pluto.

Near the western border of Sagittarius is the center of our Milky Way galaxy. By studying the motions and locations of the other stars in our galaxy, astronomers were able to find the center’s approximate location. Dense gas and dust clouds block our view of the very center, but observations point to a supermassive black hole at this location.

The first indication of something unusual here were made by pioneering radio-astronomer Karl Jansky who observed a strong radio source in this area, latter dubbed Sagittarius A. Larger and more sophisticated radio telescopes have shown that there are actually multiple radio sources that are partially overlapping. On February 13, 1974, radio observations taken at National Radio Astronomy Observatory in Green Bank, West Virginia, showed that one of these sources was bright and very compact. This bright source was dubbed Sagittarius A* (Sgr A* for short, pronounced Sagittarius A star).

Starting in 2002, astronomers made infrared observations of a star, dubbed S2, orbiting Sgr A*. The orbit S2 followed would only occur if Sgr A* was a black hole with a mass about 4.3 million solar masses concentrated in an area just 4.1 billion miles across (about the size of our solar system).

For such a massive black hole, Sgr A* is not as luminous as similar black holes in other galaxies. This luminosity comes not from the black hole itself, but the disc of material around it that is being pulled in by the black hole’s gravity. Around Sgr A*, the dust and gas falling toward the black hole is diverted by an intense magnetic field. This keeps the material from falling into the disc and creating the brilliance seen in other galaxies. Without this diversion, Sagittarius would have an additional “star,” shining at a 10th the brightness of the full moon that would mark the center of our galaxy.

The Planets for October 2021

Mars is too near the sun to be seen this month, but Venus graces our evening sky. It moves from central Libra, across northern Scorpius into eastern Ophiuchus. The Goddess of Love shines at magnitude -4.3 with a disc that is 21.6 seconds-of-arc across and 56 percent illuminated at mid-month. Venus is 17 degrees above the southwestern horizon as it gets dark, setting around 8:50 p.m.

Saturn is 36 degrees above the south-southeastern horizon as it gets dark. It is moving westward at the beginning of the month, but on Oct. 10 it stops and turns back eastward in western Capricornus. At midmonth, Saturn’s rings are 38.9 seconds-of-arc across, tilted down 19.5 degrees with northern face showing while its disc is 17.2 seconds-of-arc across. It shines at magnitude +0.5, setting around 1:15 a.m.

Shining at magnitude -2.8, Jupiter is in eastern Capricornus. It mimics Saturn’s motions, reaching its stationary point eight days after Saturn. At midmonth, The King of the Gods’ disc is 46.2 seconds-of-arc across. It is 33 degrees above the southeastern horizon as it gets dark, setting around 3:30 a.m.

Mercury pops out of the morning twilight at midmonth, reaching its greatest distance from the sun on Oct. 25, shining at magnitude -0.6. It then reverses course and starts sinking back into the sun’s glow. At its greatest distance of 18 degrees from the Sun, the Messenger of the Gods’ disc will be 57 percent illuminated and 6.8 seconds-of-arc across. It will be 11 degrees above the eastern horizon as it gets dark, rising just before 6 a.m. Mercury moves from east-central Virgo to central Virgo where it turns around and heads back eastward to east-central Virgo. Keep an eye open for Mercury in the pre-dawn hour and “keep watching the sky.”