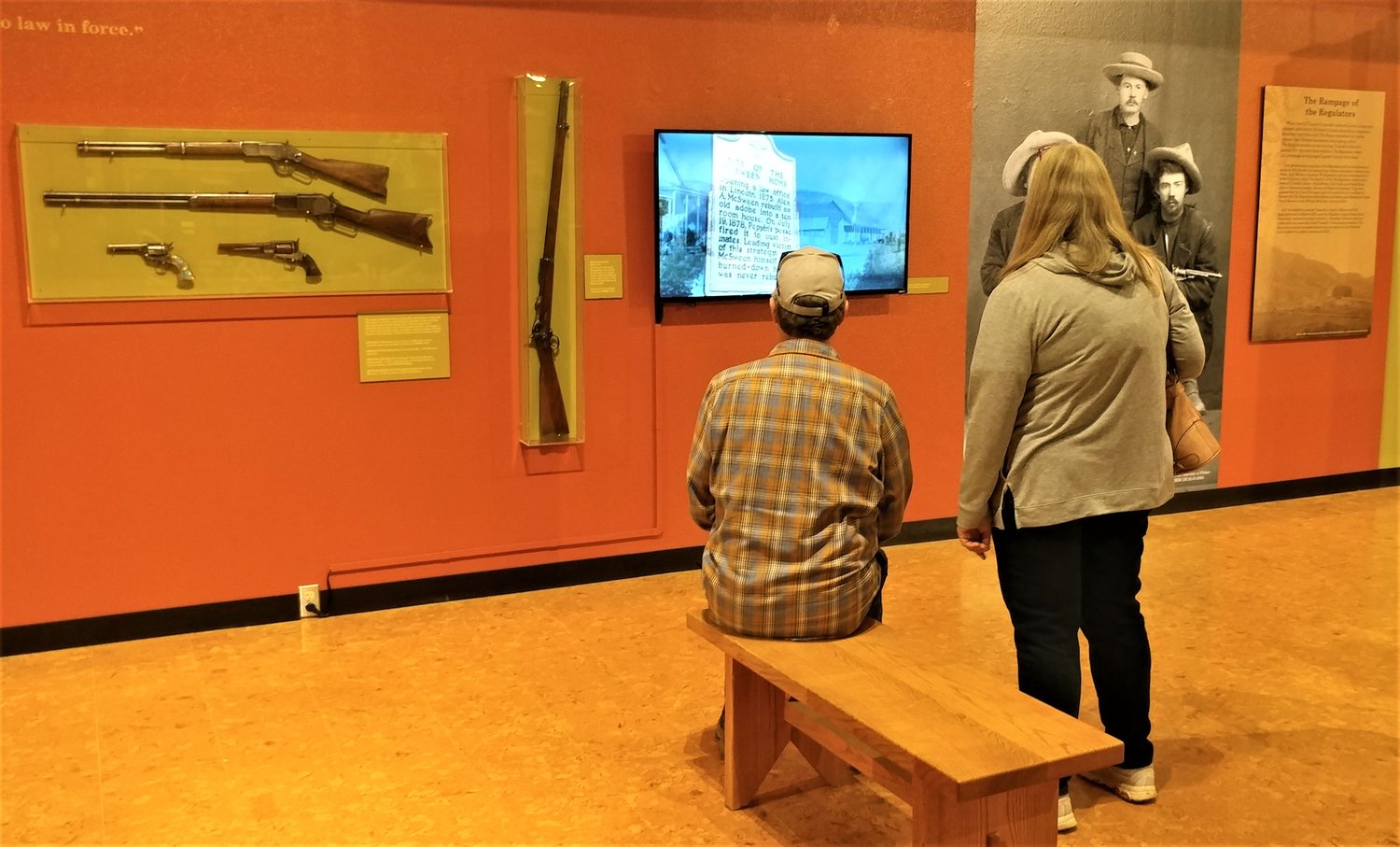 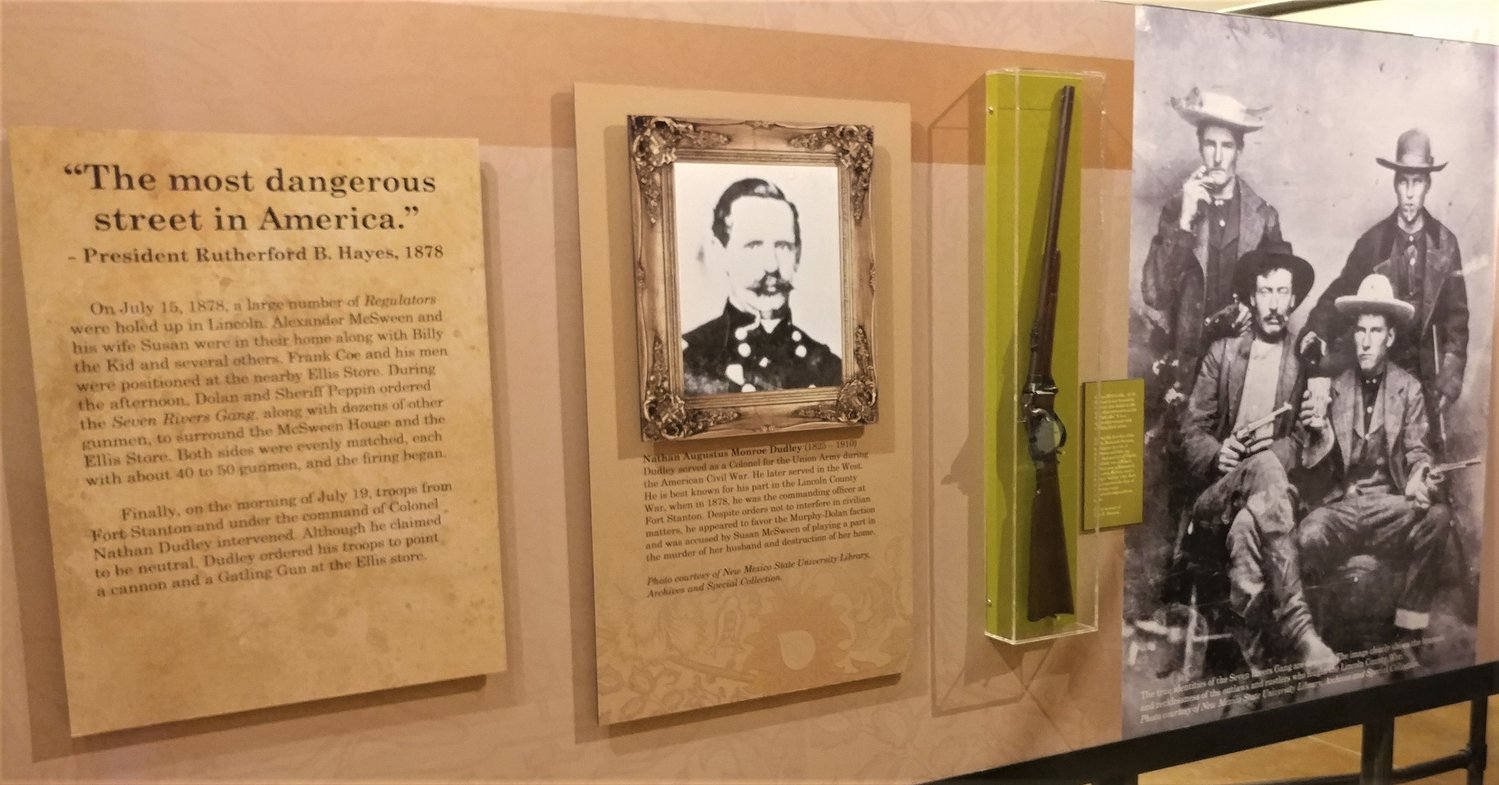 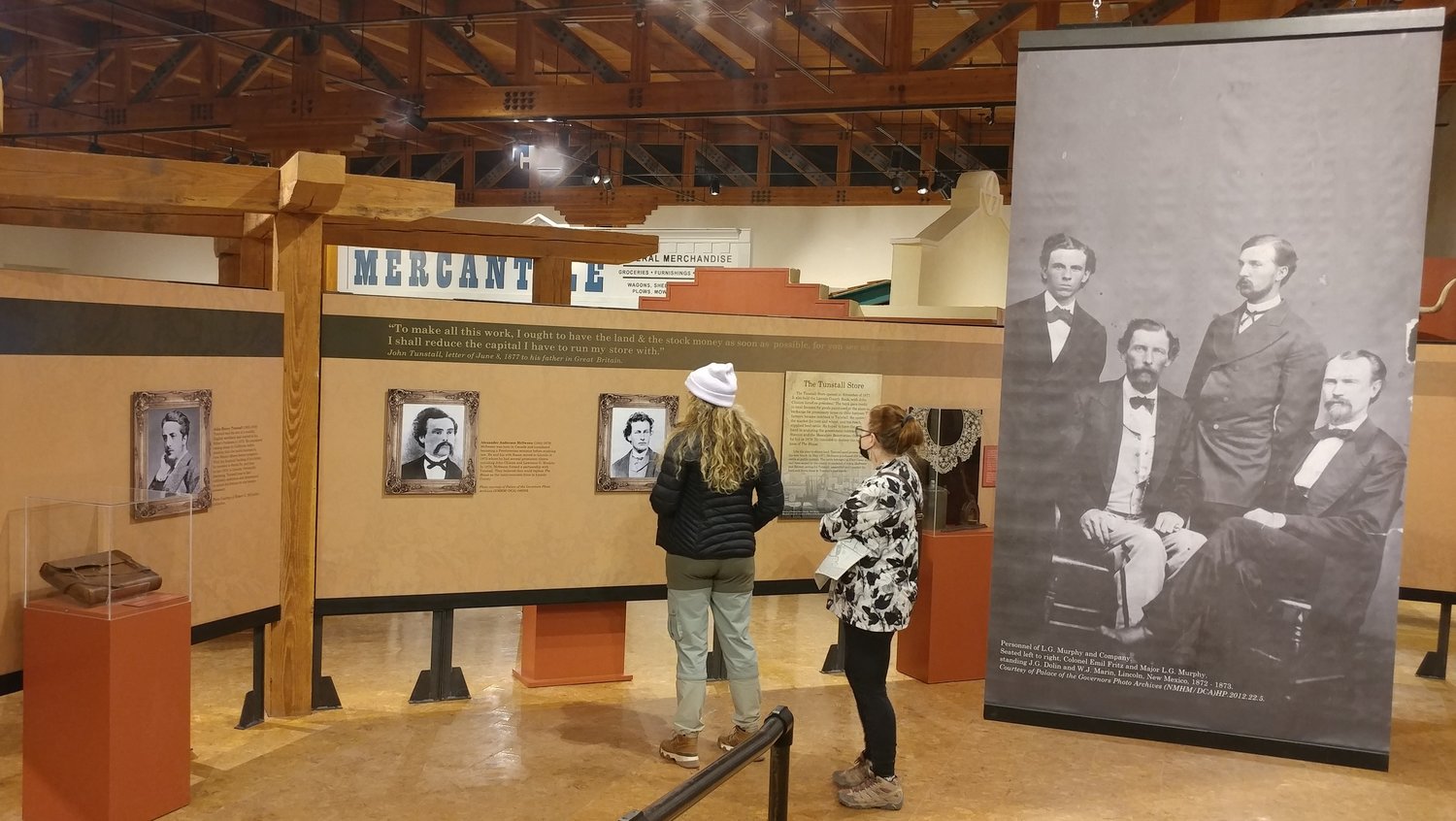 The artifact at left was John Tunstall’s writing case, circa 1869.
Bulletin photos by Mike Cook 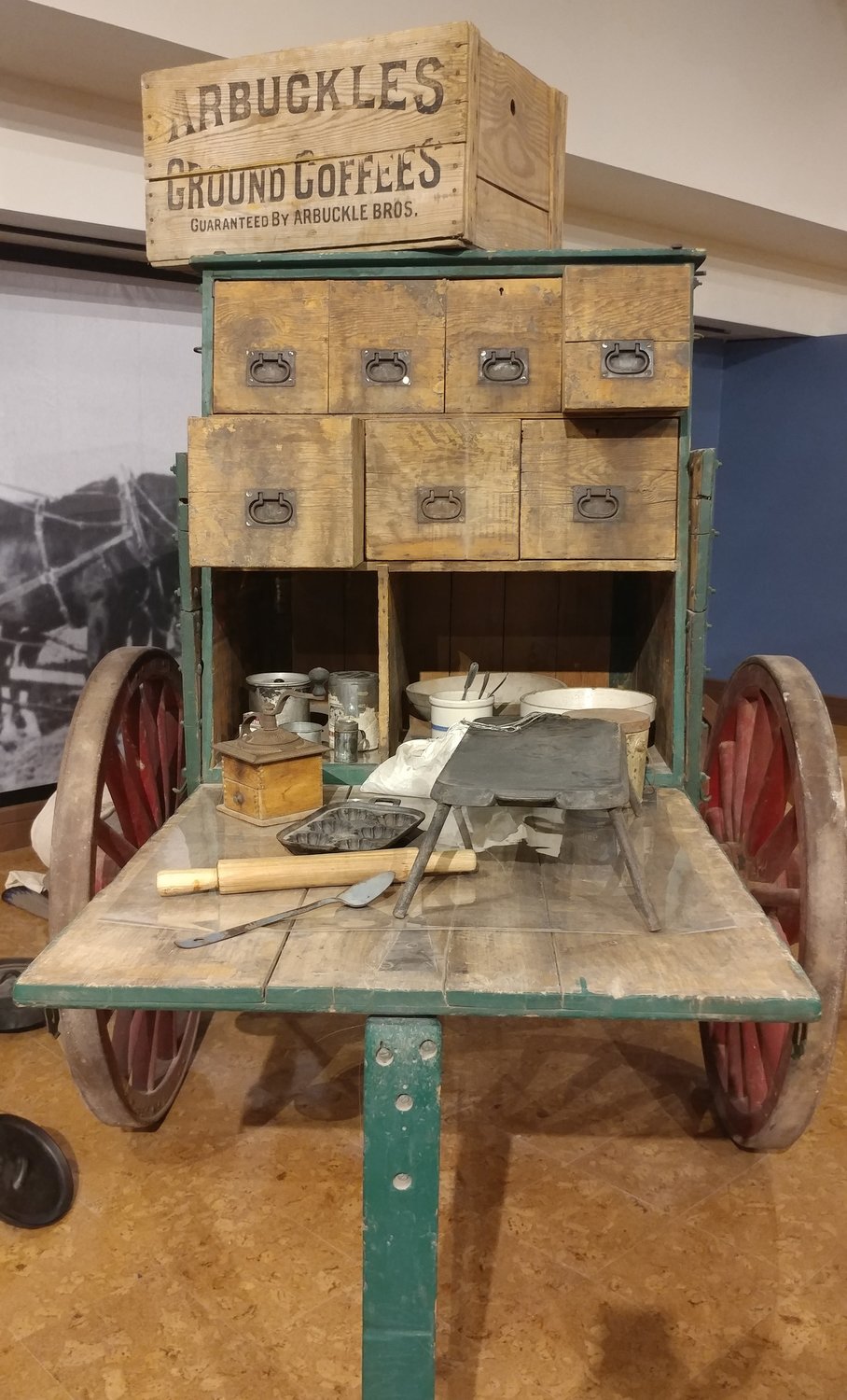 “Rancher Charles Goodnight is credited with inventing the chuckwagon,” according to the text that goes with this exhibit that is part of “Riding Herd.” Goodnight “added a chuck box to a U.S. Army wagon to create a traveling commissary that accompanied cattle drives.”
Bulletin photos by Mike Cook 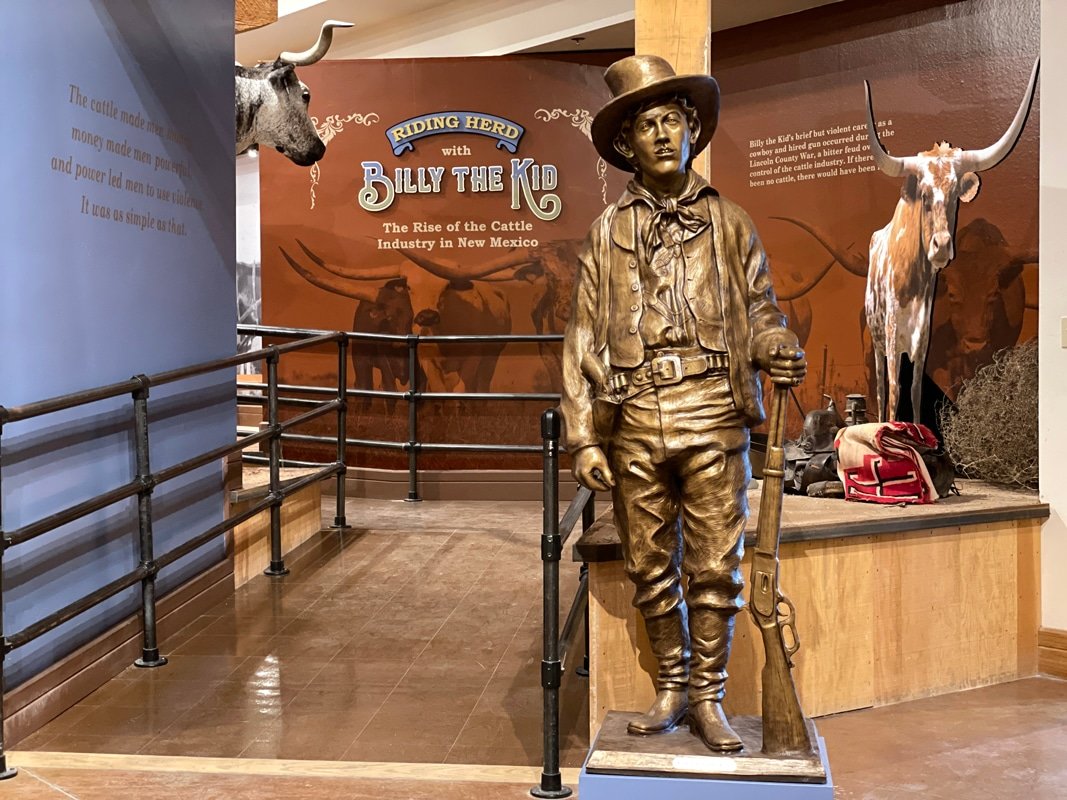 Billy the Kid, an oil on cast resin statue made by Las Cruces artist Bob Diven, welcomes visitors to the “Riding Herd” exhibit. Diven’s birthday, July 14 (1959), is the same day (1881) that Billy the Kid was shot and killed by Pat Garrett in Fort Sumner, New Mexico.
Photos are courtesy of Craig Massey, New Mexico Farm and Ranch Heritage Museum 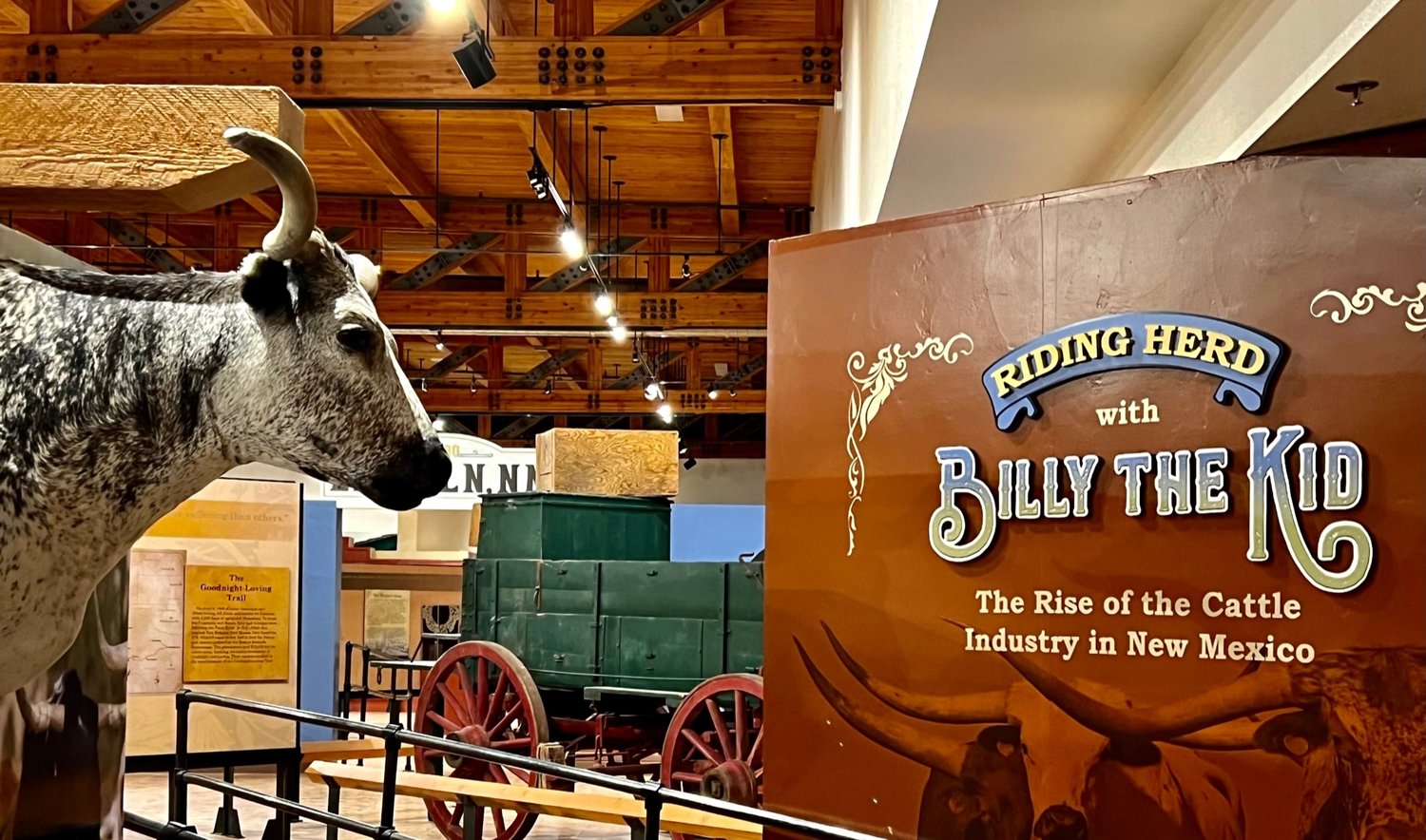 The New Mexico Farm and Ranch Heritage Museum (NMFRHM), 4100 Dripping Springs Road, has an extensive new exhibit weaving together a many-layered story that led to one of the most infamous periods in New Mexico history.

“Riding Herd with Billy the Kid: The Rise of the Cattle Industry in New Mexico” begins with the 1866 cattle drive along what would become the Goodnight-Loving Trail in eastern New Mexico and ends with the Lincoln County War in the late 1870s and its aftermath.

While there are many facets to this story, it is summed up in the exhibit’s introduction: Cattle made men money, money made men powerful and power led men to use violence. Billy the Kid’s brief but violent career as a cowboy and hired gun occurred during the Lincoln County War, a bitter feud over control of the state’s cattle industry.

Throughout the exhibit are snippets about Billy the Kid and his connection to the overall story.

“Our plan is to let Billy the Kid guide the visitor through this very important period of New Mexico history,” Tookey said.

The open range period is part of the exhibit, and other sections cover government beef contracts, the military’s role, prominent ranches and rustlers.

The exhibit features many objects, large and small. The large is a chuck wagon. The small include artifacts excavated from the site of the 1878 McSween fire in Lincoln. In between are objects such as a rifle scabbard that belonged to John W. Poe, a lawman who was with Sheriff Pat Garrett on the night Billy the Kid was killed; 13 weapons from the time period; Garrett’s branding iron; John Tunstall’s portable writing desk; and running irons used by cattle rustlers to alter brands. Various tools of the trade for a New Mexico cowboy also are part of the exhibit.

Las Cruces artist Bob Diven created a life-sized sculpture of Billy the Kid for the exhibit, and there are many historic photographs and maps.

While The Kid rides front and center as the headliner in this story, many other colorful characters also are featured, including cattle kings, a cattle queen, merchants and cowboys who doubled as enforcers, or “regulators.”

“The visitor will learn how the cattle kings such as John Chisum used the Texas Open Range system to settle the Territory,” Tookey said. “Visitors will be immersed in the story of the Lincoln County War … what caused it … who fought it … and how it ended.”

During a tour provided to the Bulletin, Tookey said “Riding Herd” will be on exhibit at NMFRHM for about two years.

“Come back a lot of times and learn more,” Tookey told the Bulletin.

NMFRHM is a division of the New Mexico Department of Cultural Affairs. The 47-acre interactive museum brings to life the 4,000-year history of growing food and fiber in the region. Accredited by the American Alliance of Museums, it features livestock, indoor and outdoor exhibits, barns, greenhouse, a gift shop and demonstrations.