A journey through quilt country 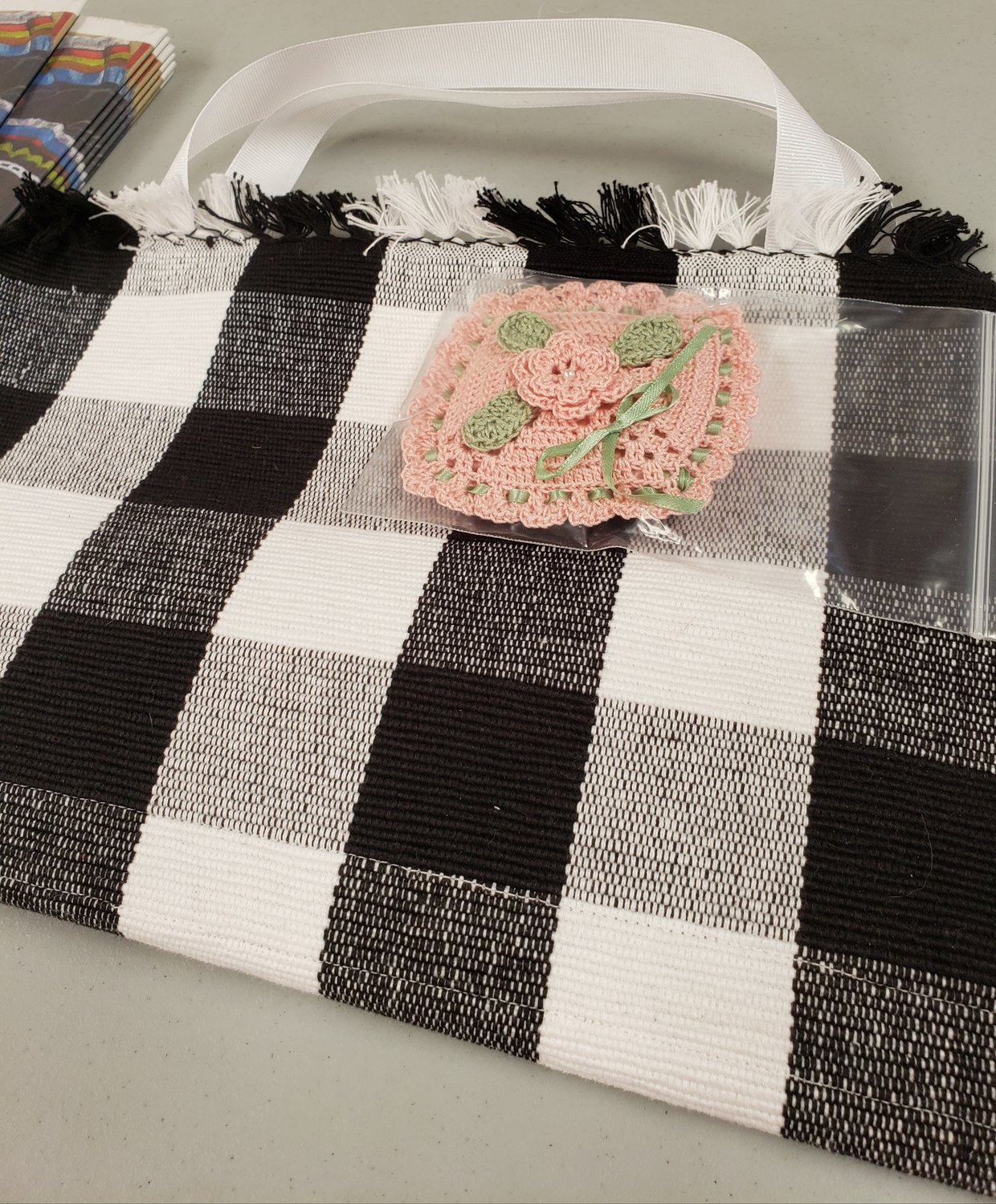 A new carry case for quilting notions embellished with a crocheted rosette, made and gifted by quilter and crocheter-extraordinaire Pam Houck. 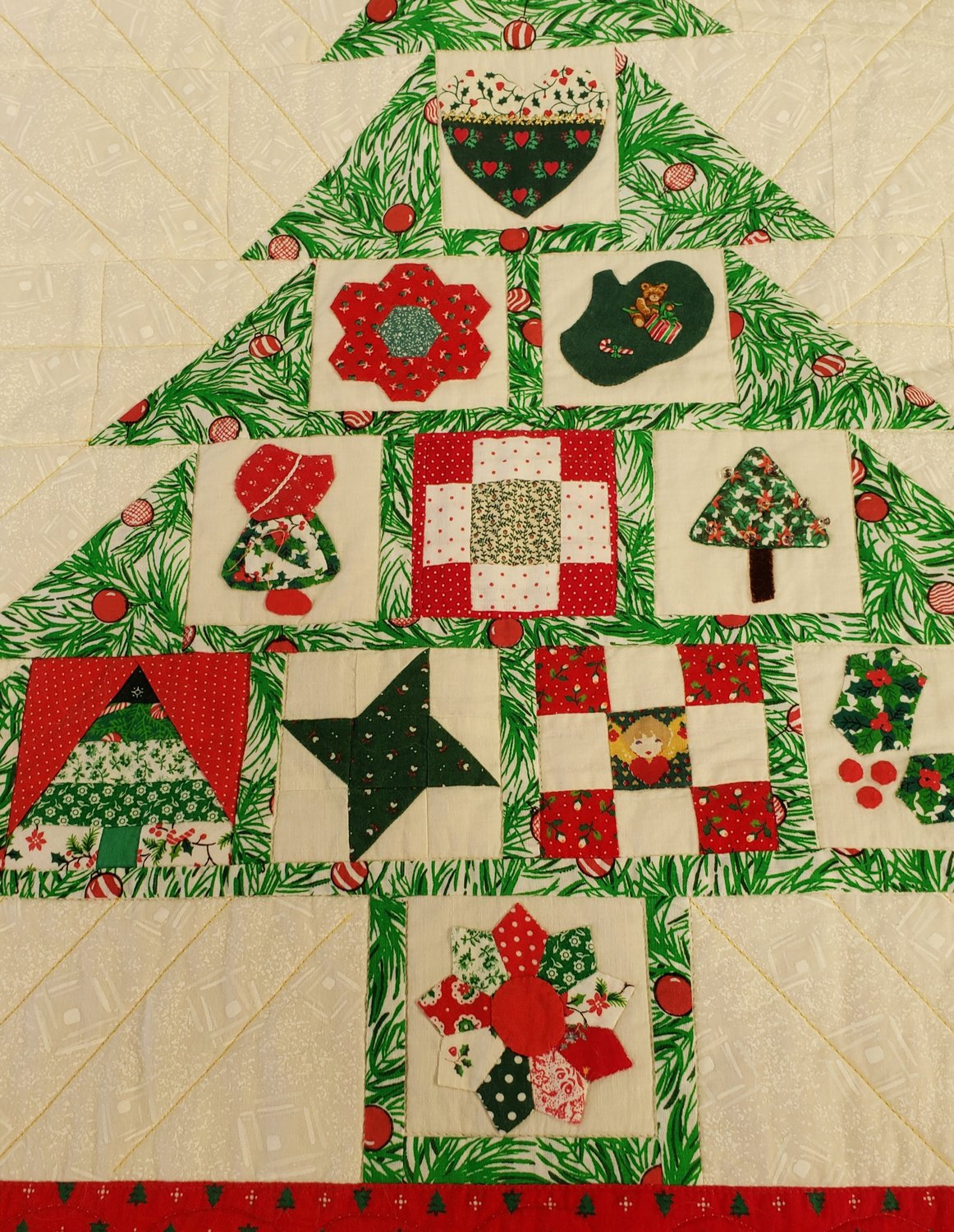 It was a beautiful day in early April, a Tuesday, as I made my way through the pecan groves where I live toward the high country of art-rich Silver City. I turned right off I-40 at Deming onto North Gold Avenue, passing under the railroad tracks through a cut lined with Mimbres designs. On this particular day and time, a train was passing overhead, the overall effect a touch surreal, first because I had expected to have to stop at a crossing to wait for the train to pass, and second, because the images harkened to a time in history thousands of years earlier. Ancient cultures, trains and the road through desert lands to the small city in the trees. I was going to meet the ladies of the Southwest New Mexico Quilt Guild (SWNMQG).

On and on, past Hurley, where the Hurley Girlies group of the guild now meet in the Infant Jesus Catholic Church; past North Hurley, wondering why there was no South Hurley. I went past Bayard and the Chino Mine that can be seen as far away as the turn-off in Deming because of its lightness in contrast to everything else in the environment. Past Santa Clara, the “Gateway to Fort Bayard,” the Civil War Army post and Fort Bayard Historic District.

As Highway 180 became Silver Heights Boulevard with its roller-coaster ups and downs, I spotted Aunt Judy’s Attic on the left: Memory Lane where SWNMQG meets, is the very next left.

They call it “Swinnymuck,” according to Guild President Carol Pickering. On that day, there was the usual show-and-tell, but what was unusual was the potluck they had organized for lunch. Usually, they go out to lunch after a meeting that consists of a little business, a class taught by one of the members or an invited guest, the show-and-tell, and socializing and storytelling.

On this Tuesday the class was taught by Lucille Bell. We made carry cases out of placemats and plastic bags closed with velcro tabs. I hadn’t brought materials, but Mary Margaret Soule had extra, so I was able to sew my own.

The quilts in the show-and-tell were fabulous and displayed a wide range of techniques. One made by Pam included appliqué and miniatures as well as crocheted rosettes. A Christmas tree wall hanging made by Marilee Avery-Logan highlighted the miniatures of which the group is so proud.

In one particularly fascinating turn of events, the Guild invited Marsha Cowan from Be Sew Creative in Las Cruces to teach them how to make pineapple quilts. The Guild decided that they should make a pineapple quilt for the Opportunity Quilt fund-raiser that helps offset the cost of the Guild’s quilt show. The project was guild-wide and members participated by making one block each. The quilt was won by Linnea Egbert, a member of the Las Colcheras Quilt Guild, also in Las Cruces. So, the guilds do not function in isolation but share and connect across county lines, creating community that extends beyond geographic distance and boundaries.

As have many things, the guild has changed since Covid caused the shutdown of many places, including where the 80+ member guild was meeting, creating a forced isolation.  The need to sew, to meet, to socialize was heightened by the physical and emotional responses to the pandemic.

But the guild was called to action to make masks for first responders, which they did, making thousands and thousands. They made then, and continue to make, quilts for families struck by devastation by fire or another catastrophe. They make quilts for newborns and children in the local hospitals and contribute to the local Southwest Valor Quilters group, run by Jude Casco. And they make quilts for cancer victims.

Over the pandemic years, guild members adapted to the changed circumstances and formed smaller groups organized around locale or stylistic interest. The Hurley Girlies is an example; guild members meet in Hurley, 15 miles south of Silver City, and help the small church as they are able with their quilts and sewing skills. And they, too, go out for lunch after meetings, reaping the benefits of the local Taco Tuesday offerings.

SWNMQG meets on the first Tuesday of the month on Memory Lane, the first left after Aunt Judy’s Attic, in the last building on the right before the cemetery. Dues are $15 a year. Get in touch by email at nmhoosierhoney@gmail.com or call Carol directly at 575-590-1380.