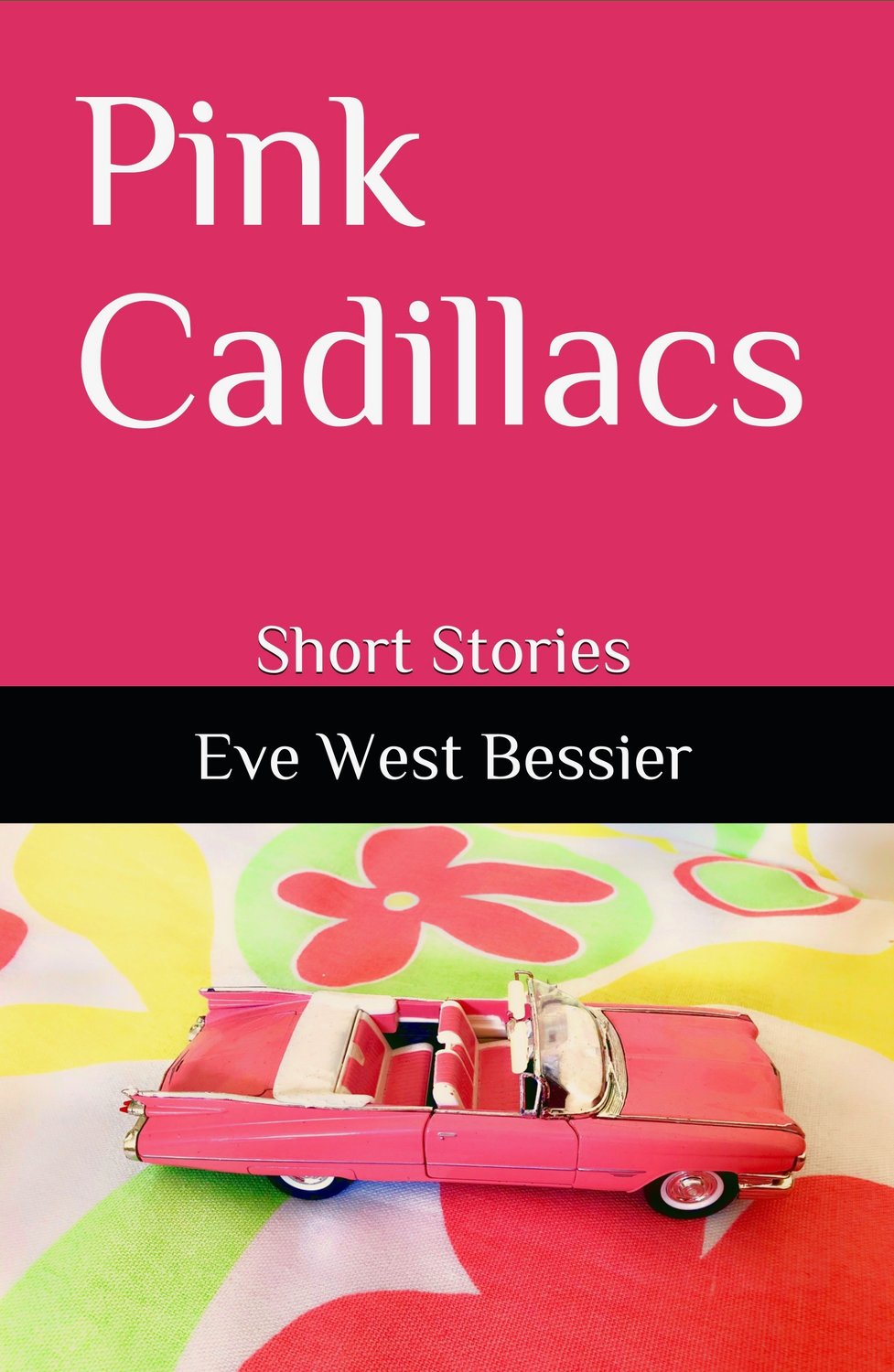 Editor’s note: Eve West Bessier a poet laureate emerita of Silver City, New Mexico. This is the opening story of her new collection, "Pink Cadillacs." Bessier introduced the book at the Southwest Word Fiesta, October 24. The Fiesta website can be found at  www.swwordfiesta.org. The site also hosts Bessier's monthly blog called, Write On. Her own website is: www.jazzpoeteve.com.

Sheriff Jack Spencer peeled the foil top off the single serving of creamer. He stared at his cup. It was too full. He leaned down and sipped a bit off the top. It was far from hot. He emptied the creamer carefully. The coffee still sloshed over the rim and spilled onto the saucer. He lifted the cup slowly and sipped. Now it was close to cold and dripped from the bottom of the cup onto the paper placemat, where he'd written a few notes for Dobson.

"Damn," Jack whispered, watching the ink lift and blur. Dobson hadn't shown, so it didn’t matter. Scott Dobson was a terrific deputy. He and Jack always met at Maggie's Cadillac Cafe for breakfast before starting their day. Jack had called Dobson twice but only got the dispatcher. Maybe last night’s storm had made the roads more impassable than usual. He'd wait another ten minutes, then he'd have to leave.

He had a meeting at the Gallup County Seat. After that, he'd pick up a load of firewood for his uncle. The old ranch house near Twin Lakes was getting draftier every year. Next weekend he'd go out there and do some repairs. For now, he'd make sure the old man had enough wood to stave off the chill. He wasn't sure how long uncle Joe could continue to live alone, but the man was a stubborn goat and not likely to leave until, as Joe himself put it, he was taken out feet first in a cedar box.

Jack stared out the window. There was a semi parked by the gas station. Maggie's Ranchero and Fred's Chevy truck were near the kitchen. He'd borrowed his girlfriend's old Ranger again for a couple of days. She was getting tired of his car problems. So was he. The department Jeep was getting another patch job at the shop.

For a moment he caught his own reflection in the glass. His hair was graying at the temples, but on top it was still solid black. He should grow a mustache. He thought his upper lip looked kind of weak. It struck him that he was looking more and more like his father. He frowned.

He shifted his focus back to the parking lot. There were only two cars he didn’t recognize: a blue Ford Escort and a white Dodge commercial van with Gomez Heating and Air painted on the side. Not a local company as far as he knew, must be passing through. The Ford probably belonged to the new waitress. Where was she? He really wanted some hot coffee. He hadn't slept well last night with the storm banging all the loose ends of his life around.

The wind was still vicious this morning. The Cadillac Cafe sign, shaped like the classic car's tail fin, was oscillating dangerously. The cafe had been a real looker in its Route 66 glory days but was now sadly in need of repairs that Maggie couldn't afford. Still, it had its charm. The booths were red vinyl and each still had its vintage Select-O-Matic jukebox controller at the back edge of the Formica tabletop. There was no longer an actual jukebox in the diner, so the remote controllers were a moot point, but a nice homage to the past.

Over the years, customers had given Maggie to-scale models of classic Cadillacs. She had glued the toy cars precariously to the tops of the chrome juke controllers. Jack was sitting in the 1955 Eldorado booth. His favorite for the view. The miniature Eldorado convertible was cherry red, but the New Mexico sun had faded the side facing the window to a soft pink. Jack had long been tempted to turn the car around, so it could fade to pink on the other side as well. Make things even, balanced.

Maybe today was the day. He made sure Maggie wasn't looking his way, then tested the Eldorado to see if it was still firmly attached. It wasn't. The Super Glue on the toy's plastic tires had become crispy in the dry desert air. He could do it, but he'd be a fool to think Maggie wouldn't notice, and a bigger one to mess with the order of things in her domain. He left the car in its original orientation.

Jack scooted to the edge of the booth, leaned out and looked around. No waitress, but his adrenals gave his heart a quick punch.

How long had she been sitting there? The plate of half-eaten flapjacks indicated a while. She was facing almost completely away from him. She was wearing faded jeans, cowboy boots, and a black sweater. She looked small, tired, too skinny.

She must’ve come in after he was seated in the booth. He was facing away from the door. But how had he missed seeing her walk in from the parking lot? His keen investigative skills were slipping, too much desk work lately. Did she sell her Toyota? Did she go into the heating and air business? That made him smile, just for a moment, as he imagined her inching through the crawlspace under some house to find the faulty duct. She was deathly afraid of spiders and snakes. Bit of a problem for a desert dweller.

She seemed preoccupied, staring at Maggie's bowling trophy display up behind the counter. He knew she had no interest in bowling and wondered what she was thinking.

"Damn," Jack whispered again. Her table was between him and the front door.

Maybe he should go over and talk to her. No. That was a bad idea. The last time he'd done that, they'd had a nasty fight. The looks she'd given him still burned. That had been over four months ago.

She had that job at the Family Dollar in Ya-Ta-Hey, but it couldn’t pay much. She could probably use some money. How much cash did he have with him? He'd just spent most of it on gas for the truck. She wouldn't accept it anyway. Too proud. He took a deep breath and let it out slowly.

Maybe she had seen him and was choosing to ignore him. She’d gotten good at that. He knew she didn't like his new girlfriend. He was beginning to wonder if he agreed with her on that.

He slumped back into the dip in the center of the vinyl bench and opened the paper’s sports section, trying to distract his mind.

After a few minutes, he scooted back to the edge and looked at her again. She hadn't moved. Come on, Hun, he thought, just finish your breakfast and get on with the day. She had always been sort of a dreamer, never in any kind of a hurry. Unlike him.

He didn't mind the dangers of his line of work. Things sometimes got a little rough. People didn't always take kindly to being apprehended. He could handle a physical skirmish. He'd even pull his gun if it was absolutely necessary, but this personal stuff was something else. Women and their entire emotional deal were a minefield, and he had big feet.

Maggie's had a service exit in back, but he'd feel like a complete coward if he used it. Plus, Maggie didn’t take kindly to customers traipsing through her kitchen. He’d never hear the end of it.

He downed a couple of sips of the cold coffee just for the caffeine, pulled out his wallet and left enough for the meal and tip under the saltshaker. He left the newspaper for the next customer.

He scooted out of the booth, put on his Carhartt jacket and cowboy hat, then walked as quietly as possible towards the door. Her back was to him now. Her long hair fell in a loose braid, blue-black and shiny as raven feathers.

He turned the doorknob and pulled lightly; the bells still jingled loudly. He glanced back. She didn’t turn around to look at him.

"Bye, Pop," she said, just like she used to as a kid. She was always late for the bus, running from the kitchen, lunch pail in hand, hair damp from her bath. Except now, her voice sounded sad.

He stopped breathing for a moment. Was she offering him a chance? A chance for what? He was caught in a tug-of-war with himself, and he didn’t have time to talk. Maybe he would call her later. He already knew he probably wouldn’t.

"Bye, Rabbit. Gotta go," he explained to the back of her head, wishing he hadn’t used her old nickname. She didn’t like it anymore. He wished she’d turn around and look at him but was also sort of grateful that she didn’t. “Running late,” he added.

He wanted to say something more. He wanted to tell her again that he'd always love her mother. Sherrie had moved on. It had been two years, he had to move on too. What more could he say? That he was sorry? He wasn't sorry. Not exactly. It was nobody's fault. It was just life. Things changed, but they were her parents and that was forever.

He fully opened the door. The chilled air entered the warmth of the diner. He stepped quickly outside and closed the door behind him.

He stood for a moment in the protected niche created by the diner’s two alcoves. He could hear the soft hum of the Open sign in the window next to him and the high-pitched whir of a lug nut wrench at the gas station.

He looked down at his feet. A thin layer of red mud caked his boots. They'd be caked with a lot more of it soon. He looked out past the highway towards the mountains. A steel-grey cloud bank approached from the north like a battleship heading in from Canada. The air already smelled like snow.

He heard the bells jingle. She stood next to him. They both looked at the menacing sky in silence.

She didn’t respond for a moment, then said, “Today.”

He let that sink in. If he hadn’t seen her this morning, would she not have told him?

He wondered how he had gotten so out of the loop.

“Is there anything I can do?”

“You sure seem plenty angry.”

“I’m always angry at something, you know that.”

“Is your mom gonna be okay?”

He turned to look at her. This was alarming news.

“I got an appointment,” he said, “but it can wait. Wanna go back inside?”

“I need to go, wanna beat this storm.”

He knew she’d considered it on and off.

“It’s another reality down there,” he said.

“Visiting a big city is not the same as calling it home.”

“Who said I’m calling it home?”

“You moving your stuff in that Dodge van?”

“Yeah. Cory borrowed it. I’m picking him up after his night shift. He’s gonna help get my stuff to mom’s, then drive back tomorrow.”

“You’re not taking your Toyota?”

She laughed. “I couldn't even get it started this morning.”

“Figure I’ll use mom’s car, ‘till I get a job and buy something used.”

He turned to face her and reached out his arms, hoping she’d accept a hug.

The force of her coming into his chest surprised him, like she wanted to hide there. He wrapped his arms around her, held her as if she were five years old and afraid of the dark.

‘An important story that needs to be told’: ‘Radium Girls’ opens Jan. 28 at Black Box Theatre