On the Island of Mull

Building a life at Achaban House 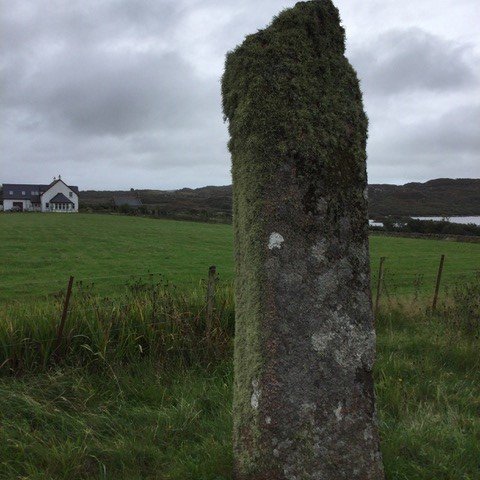 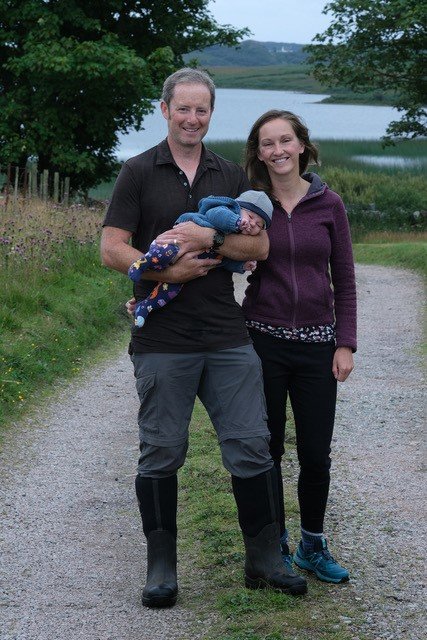 Matt, Rachel and Hamish Oliver with the loch in the background. 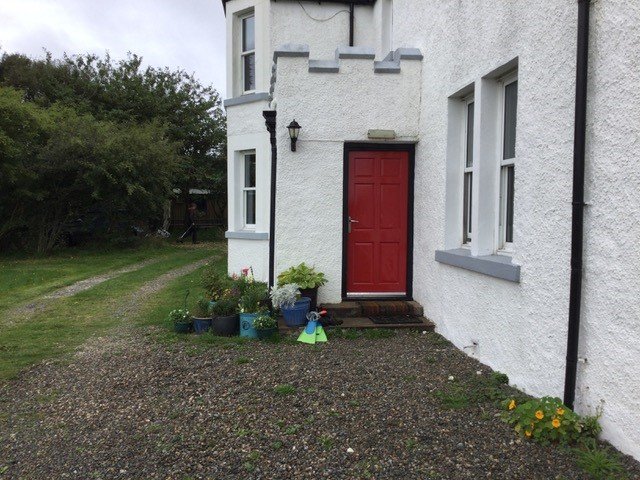 Achaban House on the island of Mull, sits on a grassy incline above Loch Pottie where mist often prevails. Its liminal quality is captivating: I watch how mist floats and hovers gauze-like, even engulfing the reflection of the loch’s surface. In no time, I begin to feel its moist presence and wonder whether I will be transmuted into water droplets.

What I also feel on this island west of mainland Scotland, is a dreamy, gray peacefulness — a mindset that may have lured monasticism to the nearby island of Iona in the 6th century. Perhaps the same spell that enabled Christianity to take hold in Scotland, also affected Matt Oliver, a research ecologist, when he first visited the island.

I spent several days at Achaban House and learned that Matt’s experience of coming to Mull, exemplifies how young persons everywhere attempt to fulfill their dreams. Times were not going well in Aberdeen, Scotland, neither for Matt nor his partner, Rachel, a marine biologist. Both hold PhD degrees, but an academic credit crunch — low funding at his university — and an unfulfilling government job for Rachel, motivated them to contemplate how to make a living in the islands. Previously Matt had secured grants for “a panorama of projects” doing ecological research in places as varied as Africa and Poland.

The pair envisioned running a hostel-type accommodation, and time seemed right to look for something to buy. Matt said he “took meaning in the task at hand.”

Built in 1863 as a manse or minister’s residence by the Duke of Argyll, Achaban House had been on the market two years when Matt saw it listed online. It was constructed of island-sourced red granite with three-feet thick walls. A pre-historic standing stone, perhaps from the Bronze Age, was extant on the property adjacent to the entrance.

In May 2016, Matt and Rachel took a proper look at the house — a six-bedroom property on the water — and were shown around by the previous owner. Its potential was obvious, and Matt’s mother who had a background in tourism agreed. The owner also thought it a sensible idea and liked the young couple’s enthusiasm for becoming part of the island ’s community.

What happened next was the almost predictable series of ups and downs where real estate is concerned. Matt and Rachel’s Aberdeen home went on the market and sold two months later. In Fife, however, at the home of Matt’s mother, there were offers and counteroffers, promising prospects, then withdrawals. While financing hung in limbo, a developer had expressed interest in Achaban House. Matt had to secure a bank loan quickly or risk loosing the property.

As soon as he told the bank that he was a research scientist with no experience in the hospitality industry, financing was denied. Then one of Matt’s good friends viewed his mother’s house on a social visit and fell in love with it. An offer from him was eventually accepted which enabled the purchase of Achaban House in May 2017.

Six months later, during a freezing storm, the couple moved in.

“It was so cold,” Matt recalled, “even the movers took breaks sitting in their van to stay warm.”

Matt wondered if he had made a horrible mistake. Remodeling ensued and took about six months.

“The wood chips in the ceiling looked like shiny porridge,” Matt said.

Pasqual, a Glaswegian plasterer from Rwanda, was hired to help strip the wallpaper and plaster walls and ceilings. Oak and spruce trim was added, plumbing updated.

The first year, Achaban’s day-to-day operation was grueling work for only two persons working 6 a.m. to 10 p.m. Rachel often prepared meals every day for 14 people at a time. Even after Matt’s mother took charge of laundering the linen during their second year, it was obvious that the original business plan had to change.

Season three incorporated change. Linen was outsourced and a cook was hired. A three-day minimum stay was instigated. Finally, there was time to get the garden truly underway.

One day, a Scottish National Trust officer stopped by to report that a footpath had been proposed on the loch edge directly in front of Achaban House. Matt was asked to serve on the committee to oversee its completion.

Matt and Rachel decided to marry and took their vows facing the standing stone — to “set their vows in stone.”

During the Pandemic and Scotland’s lockdown, Achaban House was paralyzed for four months — then operated with restrictions for four more. On a positive note, the Olivers conceived a baby during that period.

Since July 2021, Matt and Rachel have enjoyed a strong season. With parenthood, the demands of their lifestyle continue, but they still find time “as naturalists to engage with the environment.” Matt participates in bird counts and Rachel, an open water swimmer, observes the marine environment first-hand. Their organic garden should see its first asparagus harvest next year.

Overall, Matt is confident that their island lifestyle will allow “a feral upbringing for baby Hamish,” similar to his own childhood in Fife. Dreams can come true.

Silver City writer Vivian Savitt has been part of the Desert Exposure team for many years. She has had regular pieces appearing in the paper including the Southwest Gardner and then Maneuvering Elderdom columns. Now Savitt has hit the European road and is sharing her view as a New Mexican abroad.