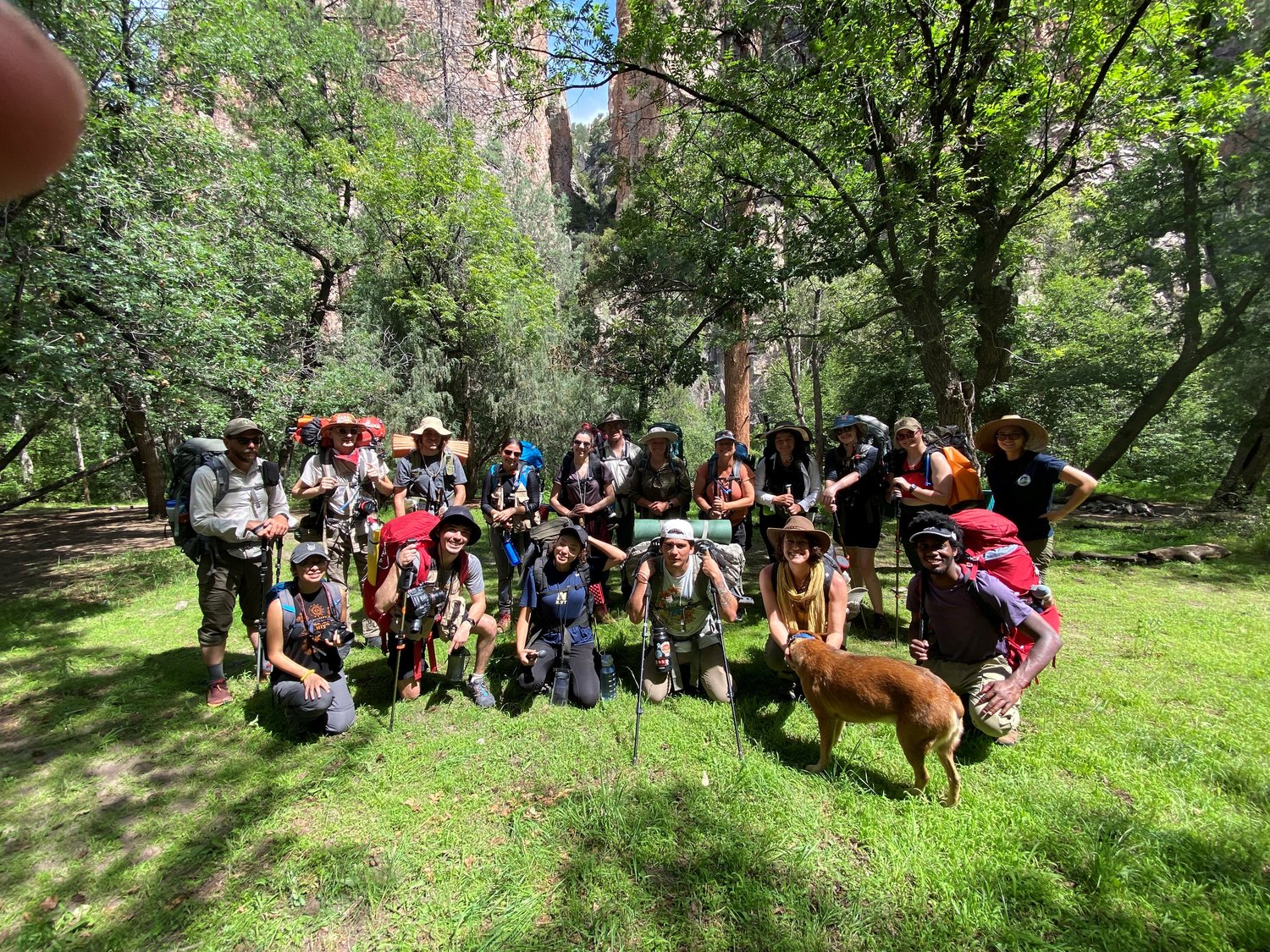 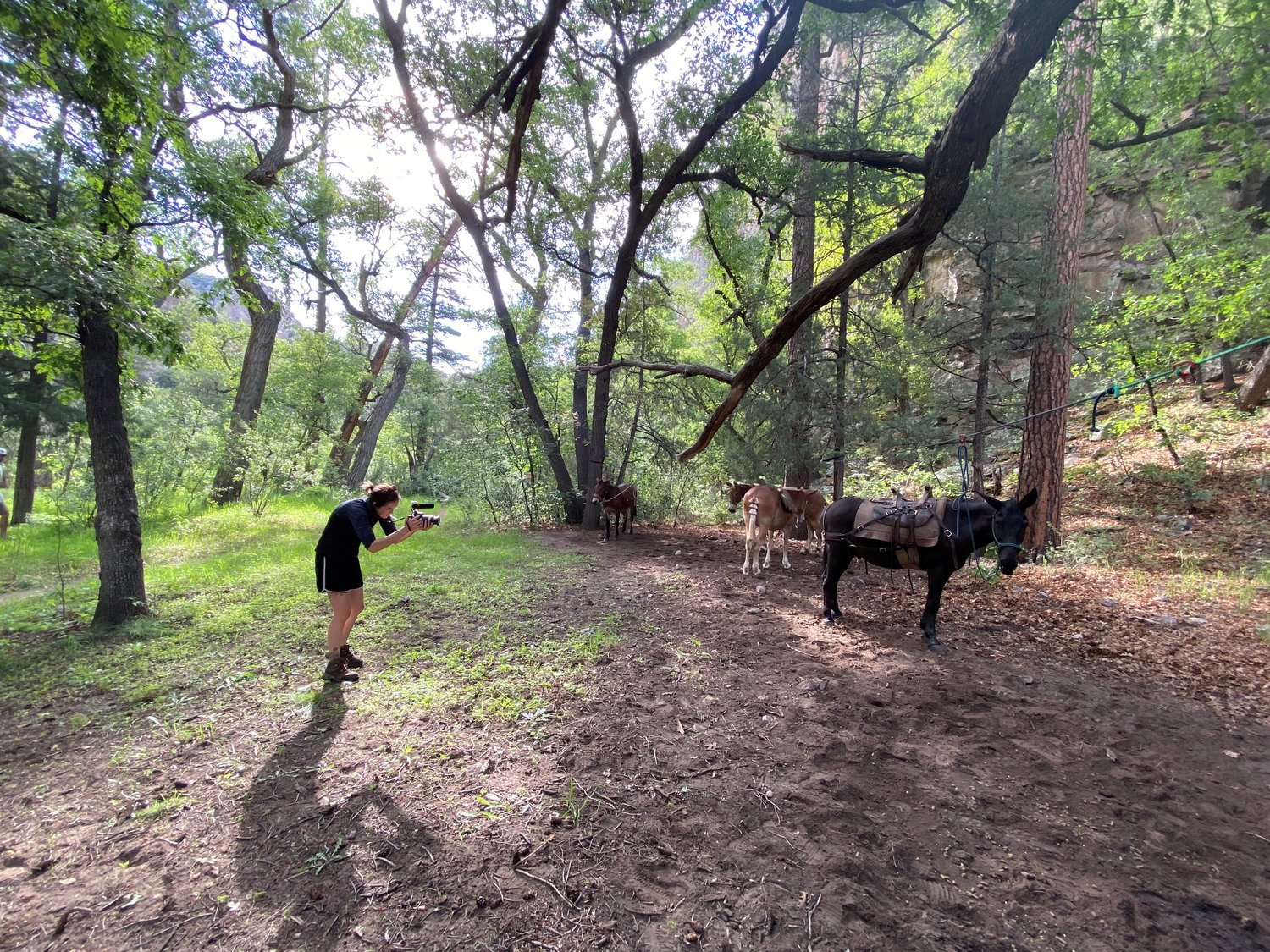 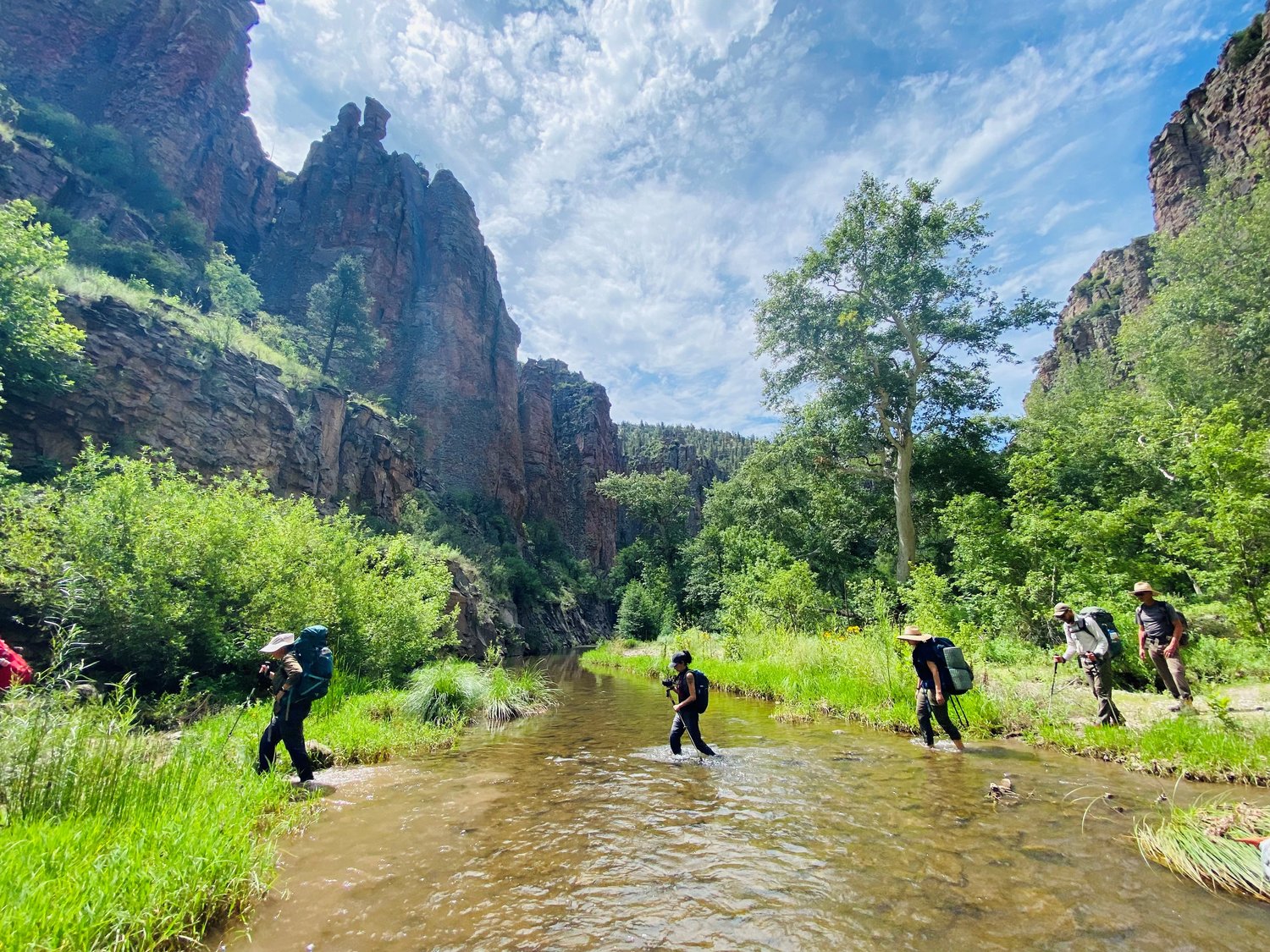 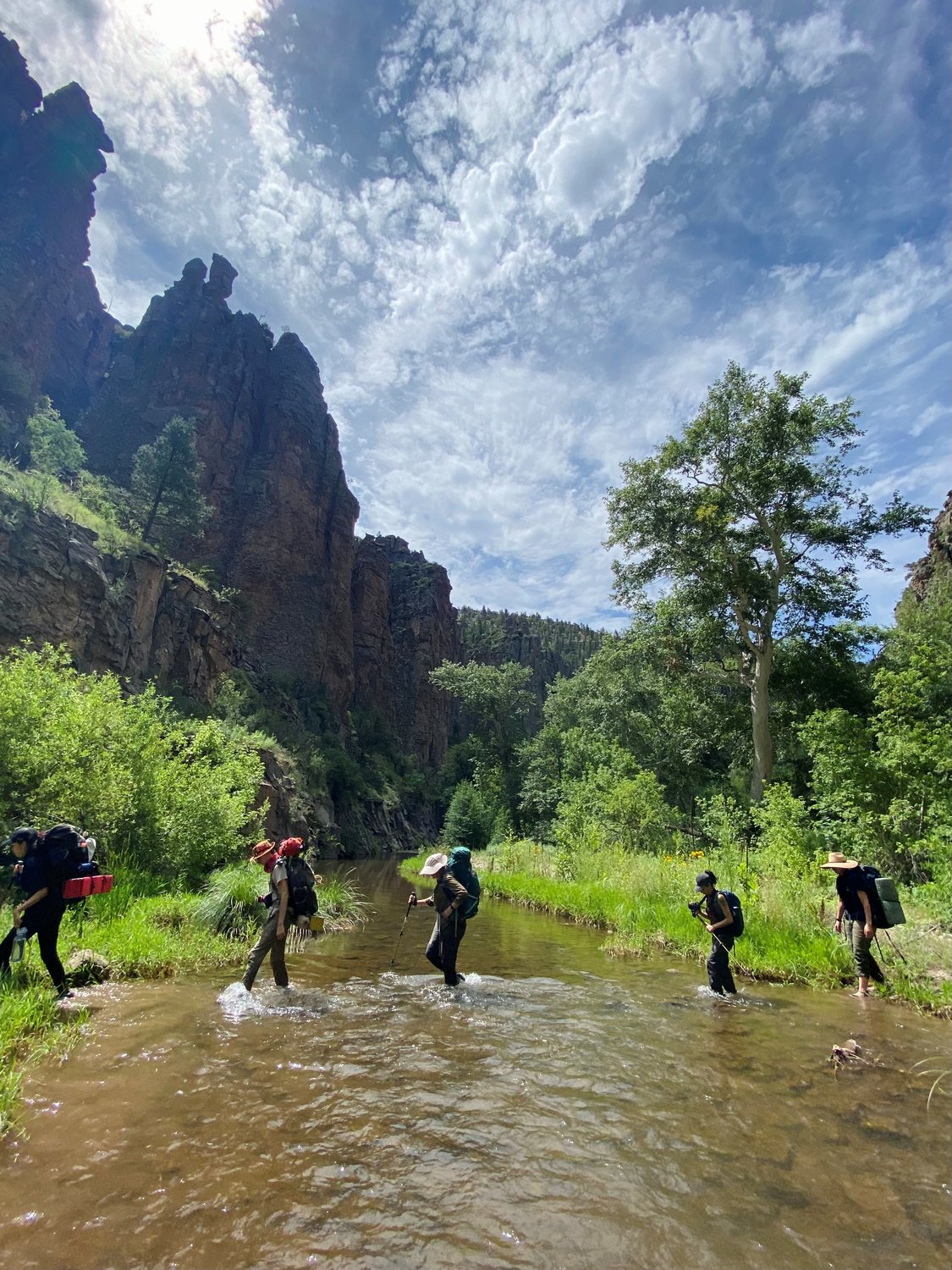 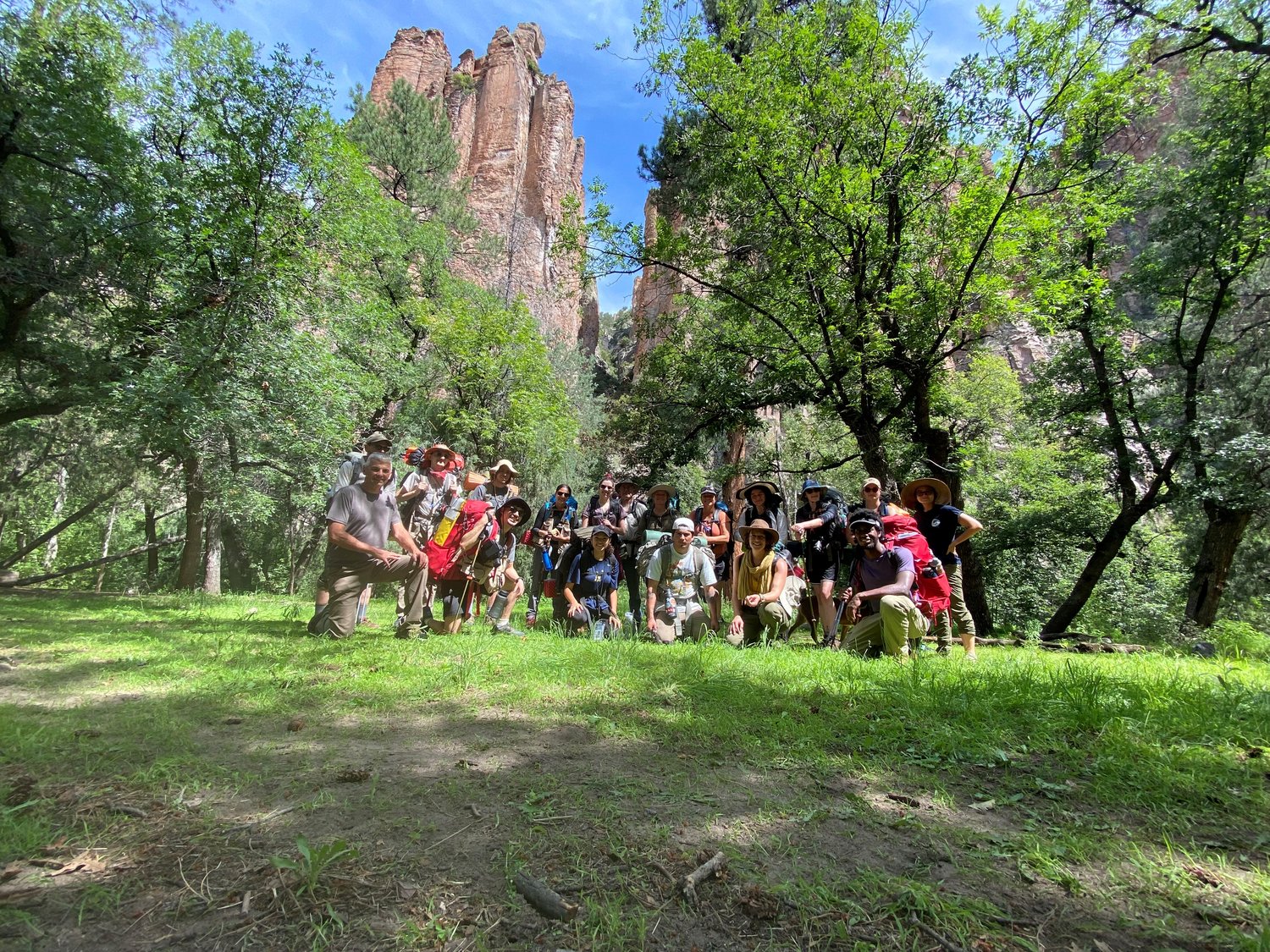 The Gila Wilderness was the classroom for 13 New Mexico State University film students in July as they began work on six short documentaries about the wildlife, the history, the people and the majesty of the world’s first designated wilderness area.

The students, who spent 12 days backpacking, camping and shooting video in the Gila National Forest’s Mimbres Ranger District north of Silver City (they return to Las Cruces July 29), are also “on journeys of personal discovery about ways in which they can use their creative voices to engage with the world around them, and tell impactful stories of conservation,” said Las Cruces filmmaker and NMSU Creative Media Institute (CMI) associate professor Ilana Lapid.

Lapid created the Gila Film School (GFS), as the class is called, and is leading it, along with educator and filmmaker Kristin Drexler, Ph.D., filmmaker and CMI graduate Julian Alexander, artist and conservationist Simon Sorelo III and filmmaker, photographer and CMI alum Kyle Ivy.

For Lapid, the path to GFS began 10 years ago, when she started work on the internationally acclaimed short film “Yochi,” about the illegal wildlife trade, which Lapid and her crew (including CMI students) filmed in Belize and released in 2017, with Drexler as producer.

Making the film “opened my eyes to the power of stories to connect people to the heart of pressing environmental issues,” Lapid said, and to the social impact that films can have in communicating the importance of biodiversity and conservation.

Her own struggle with and triumph over APL Leukemia, for which she is four years in remission, deepened Lapid’s interest in “telling stories of personal transformation and healing,” she said.

Those experiences translated into a social impact filmmaking track at CMI and led Lapid to partner with Drexler and the U.S. Forest Service to create GFS.

GSF will “facilitate a positive and meaningful experience for these 13 talented students,” said Drexler, a former park ranger and wildland firefighter who is now a full-time professor of earth sciences at American Public University.

“For me, this is quite exciting and one of the best things I can be doing – for education and conservation of nature, as well as personal impact and growth, for us and the students,” Drexler said.

“This is what filmmaking is about,” said Alexander. “It lets filmmakers experience new things.”

Alexander was in the first class Lapid taught at CMI in 2011.

Alexander was an adjunct professor at CMI before earning an MFA at Northern Leeds University in London. He is now pursuing a doctorate in the use of hip hop and rap as the primary storytelling tool on screen at the University of East London.

Kyle Ivy, director of marketing and communications for the Las Cruces International Film Festival, is GFS program coordinator, in charge of logistics and making sure everyone is safe and accounted for at all times.

“There are a lot of moving parts,” Ivy said.

Before they left for the Gila July 18, the student filmmakers got in-person training in how to: dress in the wilderness, pack a backpack, erect a tent, use a “bear bag” to keep their food safe, cross a river and deal with potential dangers, including bears, snakes, flashfloods, lighting and wildfires.

The films they make will be part of the 100th anniversary celebration of the designation of the Gila as the first ever wilderness area, in 1924. They also will be shown to fourth graders across New Mexico, along with an educational supplement about conservation.

For some of them, GFS is the first time they have backpacked or camped out in the wild.

De La O is part of the team making a documentary about firefighting in the Gila.

Sanchez is an Eagle Scout with a lot of backpacking experience. He wants to explore the impact this year’s wildfires have had on the Gila and wants to record its “natural silence.”

Jimenez, Markman and Jaso are working together on a documentary about efforts to protect the Gila River.

Making the documentary is “so beyond art,” said Markman, another Eagle Scout. It has “a greater purpose.”

Jimenez said she is “grateful to be out in the field in film.”

Jaso said she is both excited and nervous about the experience she will have and the film she will create.

“I love getting people together,” said Soto, who is from El Paso and wants to be a film producer. She will work on a documentary about the conservation of the endangered Gila trout as it “impacts the Gila and as an indicator of the whole ecosystem,” Soto said.

Araceli “Blue” Hernandez and Dominic Adame, both 2021 CMI graduates, are also part of the team, and are working on a film about the students’ Gila experience. Both are “really gifted filmmakers,” Lapid said.

The students and the GFS team are joined on the trip by forest rangers, naturalist Aldo Leopold impersonator Steve Morgan and five pack mules.

Everyone involved with GFS is “connecting with nature and the wilderness to tell authentic stories,” Drexler said. The films they make will “impact people, encouraging them to hike and explore the wilderness, and to care about it, protect it and preserve it.”

For “Blue,” who loves hiking, fishing and camping but has never been in the Gila National Forest, GFS combines “the love of film and the love of nature.”

“The Gila Film School is the pilot project of the proposed Southern New Mexico Environmental Media Center at NMSU (SoNM EMC), for which Kristi and I applied for funding,” said Lapid said. “This initiative would involve collaborations between researchers and scientists working on climate change and other environmental issues with visual storytellers who can amplify the impact of their work. SoNM EMC would include additional documentary field programs, offered as partnerships between NMSU, non-profits, and federal agencies.”