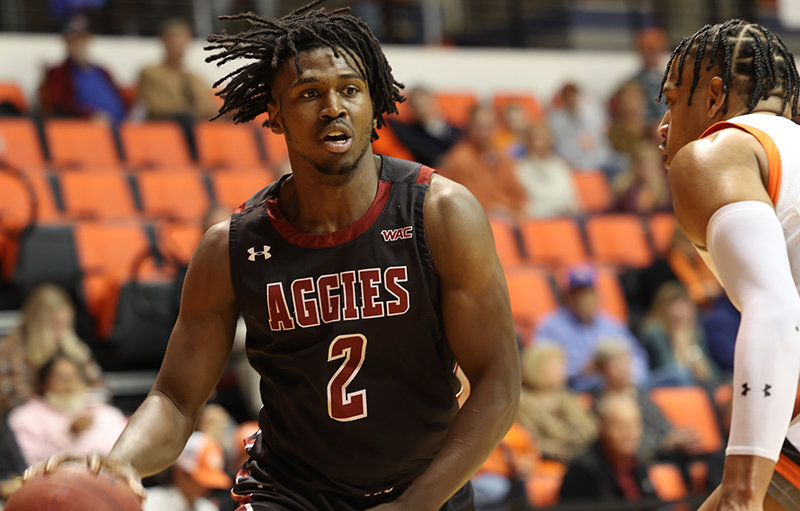 A Sam Houston state squad which brandished out some impressive firepower ambushed NM State (15-3, 5-1 WAC) inside Bernard G. Johnson Coliseum as the Aggies found themselves down 38-18 at the half before falling 71-46 to the Bearkats in the first meeting between the two programs since 2005.

The loss put an end to the Aggies' 10-game winning streak, but kept them tied for third in the WAC standings. NM State is now in a two-way tie for the number-three spot in the league with Grand Canyon (who lost at SFA Thursday night). Seattle U now owns sole possession for first place in the WAC standings following its 72-62 win at Abilene Christian earlier in the evening while the Bearkats' sit in second place by virtue of a 11-9, 6-1 mark in WAC action.

SECOND HALF
• Sam Houston's insurmountable lead grew to as many as 38 points by the time all was said and done.
• Through the course of the last 9:25, NM State closed on an 18-5 run to cut the Bearkats' lead to 25 at the final horn.
• Mario McKinney Jr. and Levar Williams accounted for eight of NM State's final 18 points as the Aggies shot 7-of-23 (30.4-percent) from the field in the deciding frame.

KEY PERFORMERS/STATISTICS OF NOTE
• No Aggie hit double digits in the scoring column and for Teddy Allen that meant his streak of 17-straight game of 10 or more points game to an end. Allen, the reigning WAC Player of the Week, finished with just two points to go along with five rebounds and two of the Aggies' eight assists.
• McCants and Donnie Tillman tied for team-high scoring honors by finishing with eight points apiece. Alok chipped in six for NM State which saw its seven-game streak of consecutive road wins snapped with the loss, too. That stretch was the nation's second-longest active run of true road wins.
• NM State shot just 13-of-37 (27.7-percent) from the field in the loss. The Aggies didn't fare much better from three-point range, connecting on only 22.2-percent (6-of-27) of their tries from that distance.
• Flagg poured in a game-high 22 points on an 8-of-16 shooting clip while Demarkus Lampley added 10 on 4-of-7 shooting.
• As a team, Sam Houston shot .531/.448./667 and relied on 13 three-pointers to get the job done. Ball movement helped the Bearkats' chances, too, as they finished with 20 assists on 26 made field goals.
• The Aggies' 46 points were a season low as well as the fewest scored by the team since generating only 41 in a non-conference loss at Wichita State in on Feb. 15, 2016.

COMING UP NEXT
• A trip to Texas' oldest town, Nacogdoches, is up next for NM State. Saturday afternoon, the Aggies will try to take the wind out of SFA's sails after the Lumberjacks hammered Grand Canyon by a score of 71-46 Thursday night. Tip-off inside William R. Johnson Coliseum in the inaugural showdown between the Aggies and Lumberjacks is set for 1:00 p.m.