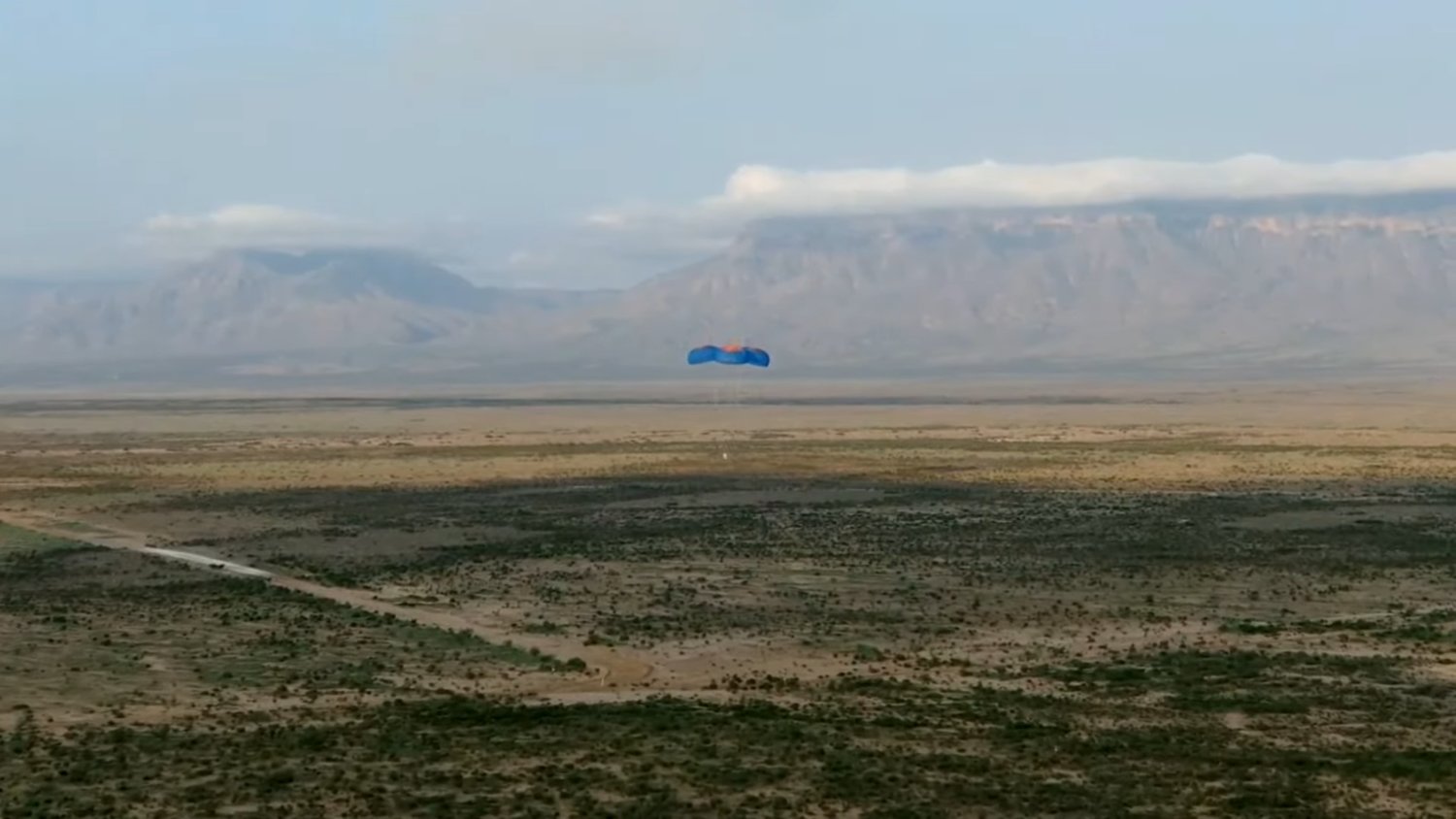 The New Shepard capsule lands softly in the West Texas desert returning from a historic flight setting several records including that of the first commercial vehicle to fly paying customers, including payloads and astronauts, to space and back.
Screenshot from live video 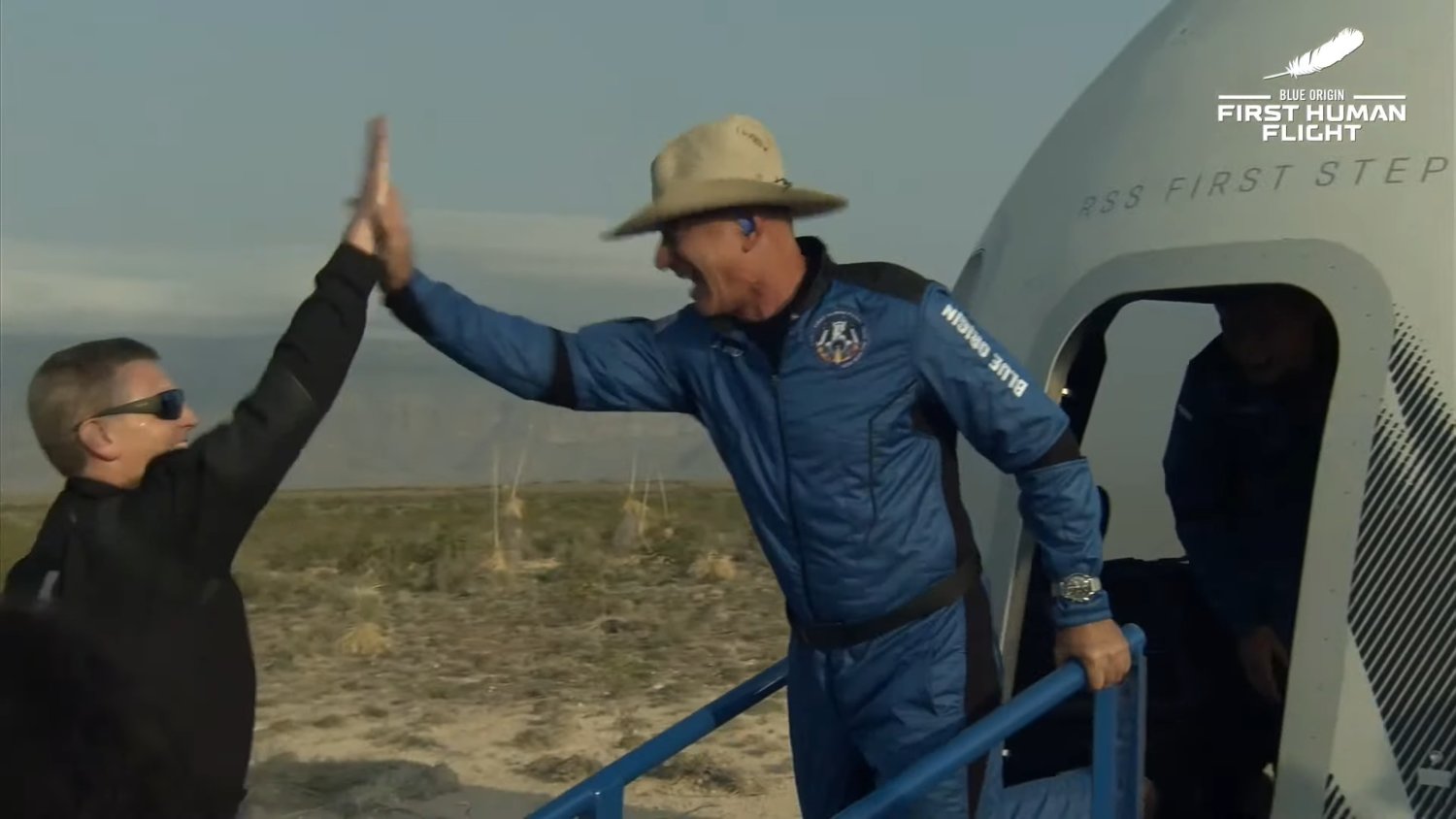 Jeff Bezos exits the New Shepard capsule after going to space on a mission the set several records including that of the first commercial vehicle to fly paying customers, including payloads and astronauts, to space and back.
Screenshot from live video
Previous Next
Posted Thursday, July 22, 2021 10:00 am
New Shepard records set:

•Wally Funk, 82, became the oldest person to fly in space.

•Oliver Daemen, 18, was the first ever commercial astronaut to purchase a ticket and fly to space on a privately funded and licensed space vehicle from a private launch site. He also became the youngest person to fly in space.

•New Shepard became the first commercial vehicle under a suborbital reusable launch vehicle license to fly paying customers, both payloads and astronauts, to space and back.

•Jeff and Mark Bezos became the first siblings to ever fly in space together.

In 11 minutes, the world changed again as Jeff Bezos, his brother Mark Bezos, female aviation pioneer Wally Funk and 18-year-old Oliver Daemen blasted off into space, 62 miles above the earth, on Tuesday, July 20. The flight took off just across the border from southern New Mexico near Van Horn, Texas.

Two New Mexicans were along for the ride. Jeff Bezos was born in Albuquerque and Funk is from San Miguel County. Funk, at 82, now holds the record as the oldest person to go to space, something she set her mind on when she was 17.

The vertical launching New Shepard space vehicle is designed to carry people and payloads on brief trips to suborbital space. The 59-foot-tall (18 meters) craft is named after NASA astronaut Alan Shepard, whose suborbital jaunt on May 5, 1961, was the United States’ first crewed spaceflight. Shepard’s daughters were on-site to witness the flight.

During a press conference following the flight, Bezos thanked every Amazon customer and employee “because you guys paid for all this.”

He said his expectations for the flight were high, but they were “dramatically exceeded.”

“It felt so normal,” he said. “It was serene and peaceful and floating was a pleasurable experience. It is a most profound peace.”

“It was way more fun than it looked,” Daemen said after watching a recap video of the experience.

But Bezos also talked about seeing the Earth from space.

“As we move about the planet, we are damaging it,” he said. “It is amazing to see how fragile it really is.”

Mark Bezos said on the flight with the team, on loan from the Explorer’s Club, was a piece of canvas from the Wright Flyer, the plane that the Wright brothers flew; and a bronze medallion made from the first hot air balloon in 1783, the first-time man ever left the Earth in controlled flight.

They also had with them the goggles Amelia Earhart wore on her flight across the Atlantic.

“I like to think if Amelia were here, she would be very proud of what we are doing,” Jeff Bezos said as he put on the glasses.

Funk and the others agreed the event was more emotional than anticipated both in the capsule and when they landed, and family members were there to meet them. Daemen had tears in his eyes as he talked about the experience.

There are two additional fully manned flights planned this year.

At the end of the press conference, Jeff Bezos announced the creation of the Courage and Civility Award, recognizing leaders who aim high, pursue solutions with courage and always do so with civility. The award went to Dream Corps founder Van Jones and José Andrés, the restaurant owner and chef from Spain who arranged to feed thousands during the pandemic and in disaster areas around the world. Each of them received $100 million to distribute to the charities of their choice.