Mimbres maps of the universe 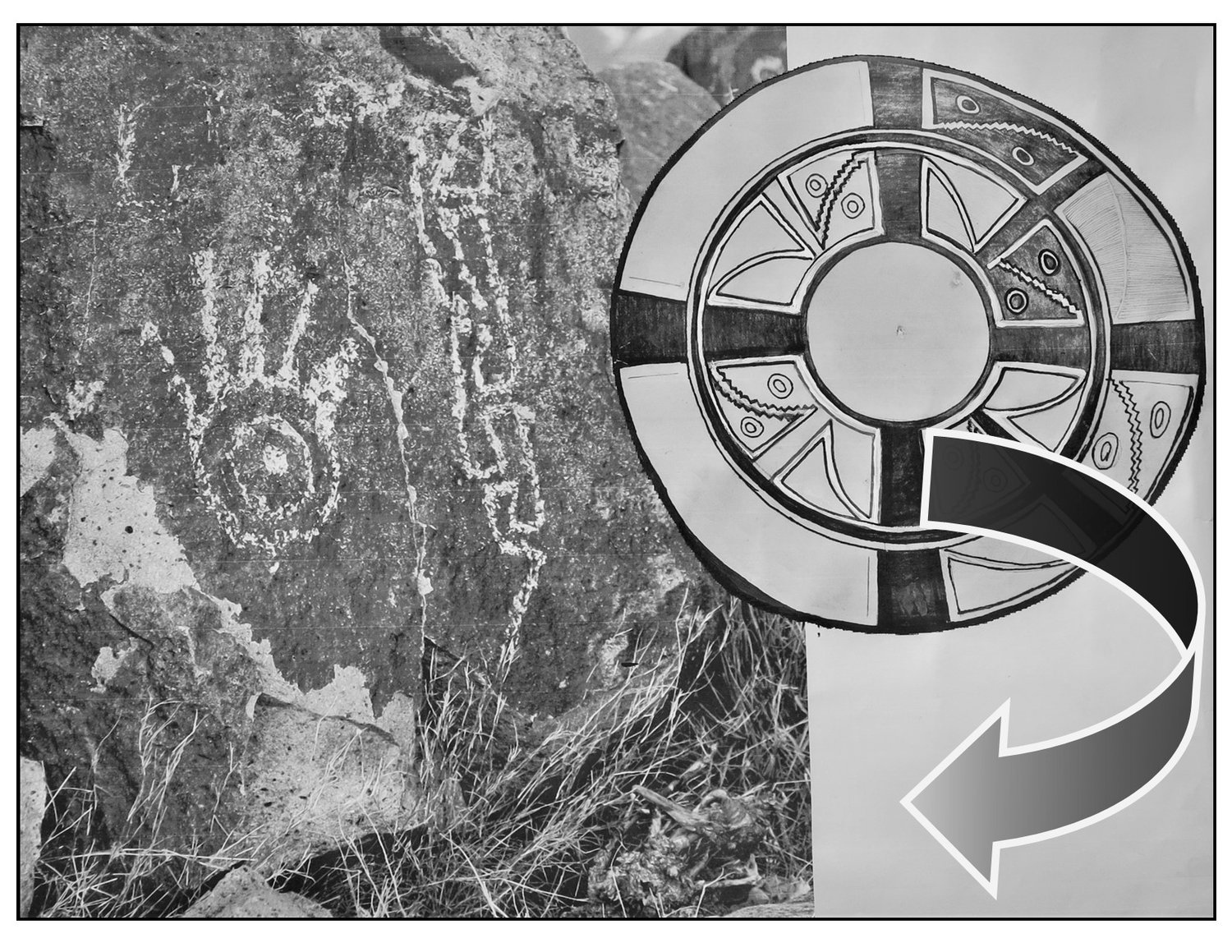 During Winter Solstice, at A Mimbres-style petroglyph of a vertical open-ended chain mirrors the chain in a closed circle in a Mimbres painted bowl. The painters’ skills in geometry and symmetry often transform flat images to three-dimensional images.mid-morning, the shadow from a casting stone bisects the human hand with a concentric circle and point motif. Simultaneously, a small circle with a point in its center at the end of a vertical square-chain motif is also bisected.
Graphic by Joan Price 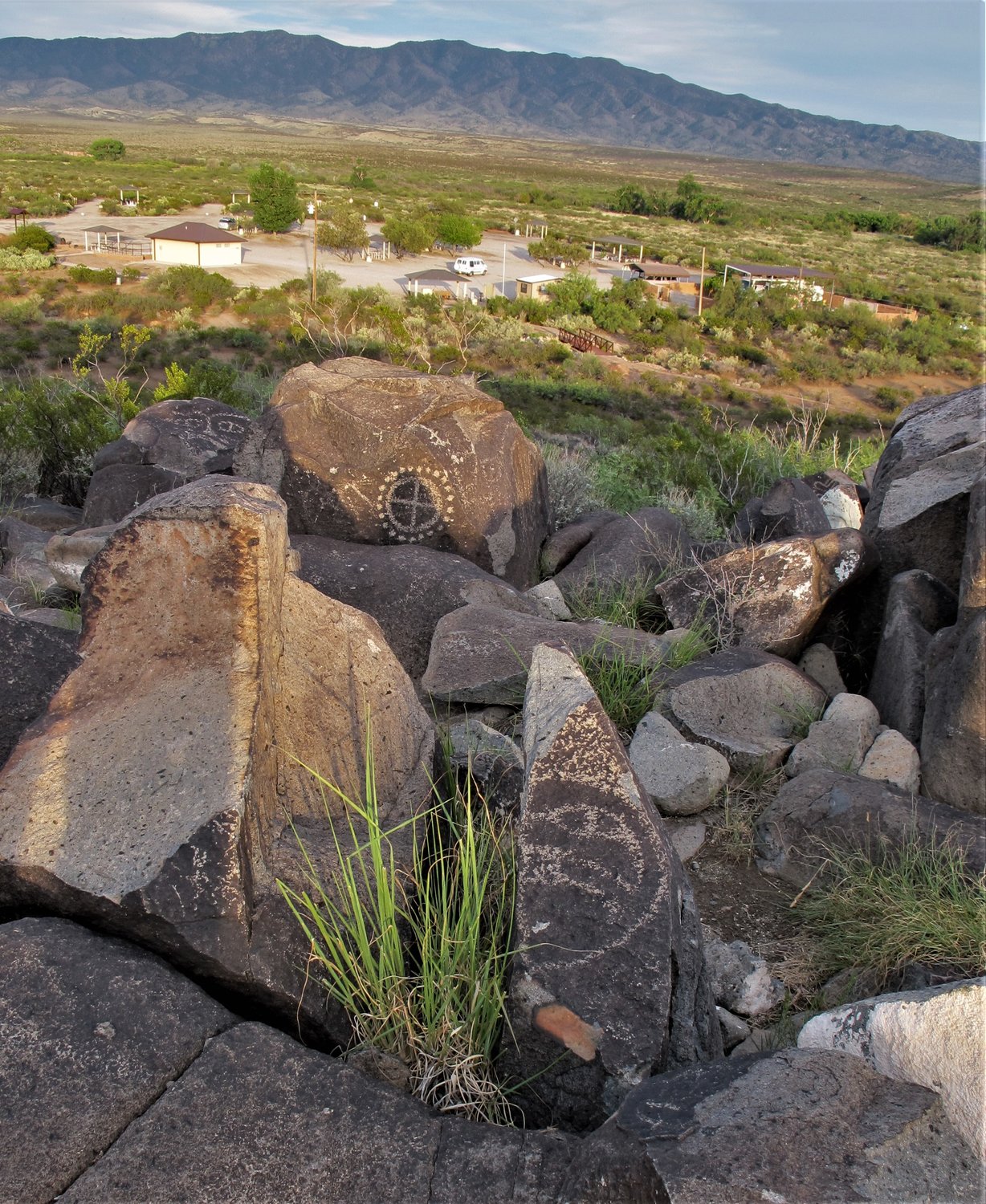 On Summer Solstice sunset, half of a face on a cone shape stone casts a cone shadow into a circle and cross behind it at Three Rivers Petroglyph Site.
Photo by Joan Price 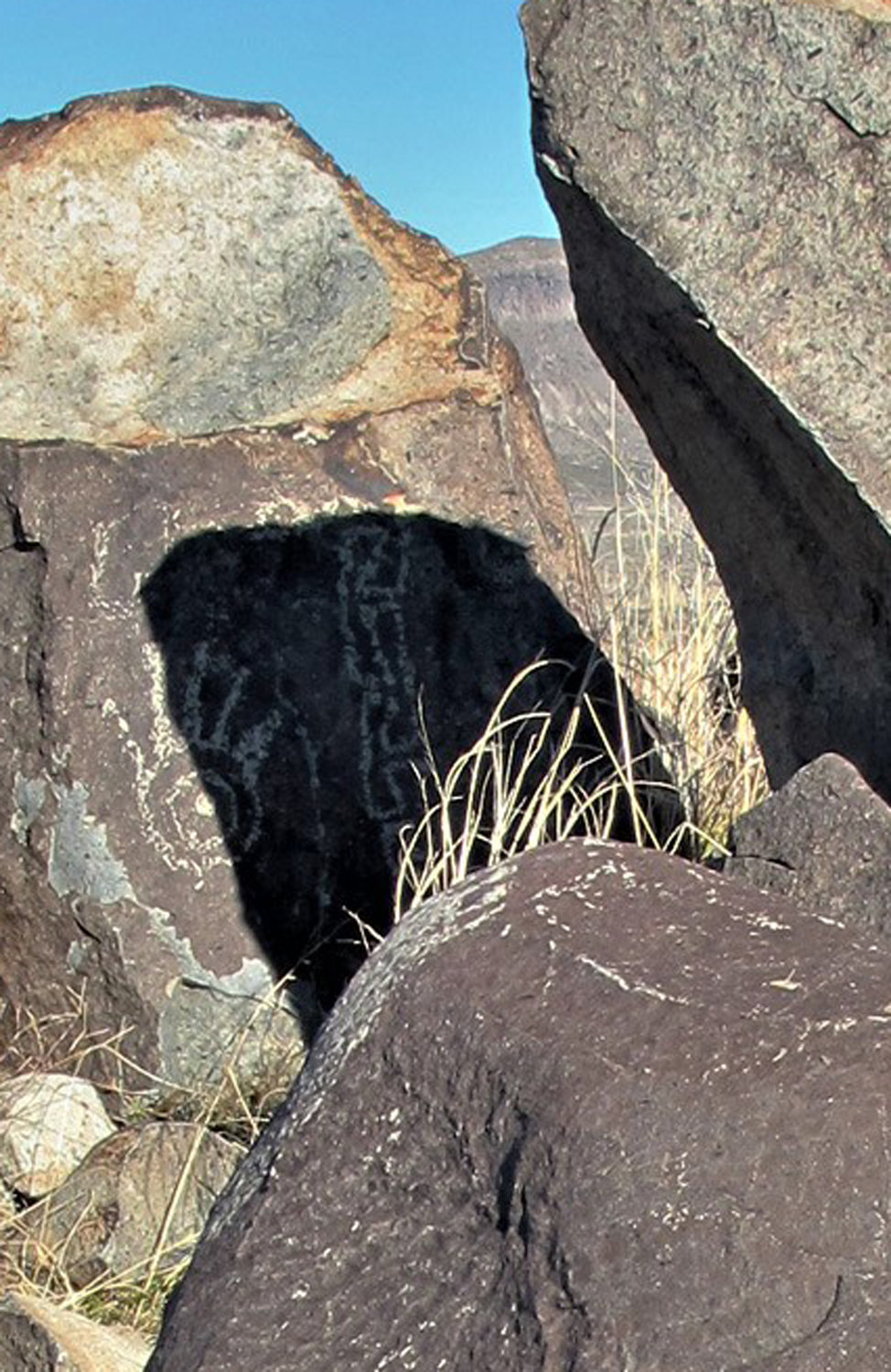 During Winter Solstice, at mid-morning, the shadow from a casting stone bisects the human hand with a concentric circle and point motif. Simultaneously, a small circle with a point in its center at the end of a vertical square-chain motif is also bisected.
Photo by Joan Price
Previous Next
Posted Wednesday, June 2, 2021 11:48 am
By Joan Price

Nikolaus Copernicus, a Renaissance mathematician born in 1473, kept his mathematical findings that the Earth is not the center of the universe to himself. Rather, he found, Earth is one of several bright planets that were heliocentric, in other words (Latin at that time), they circled the sun in concentric orbits.

The sun is the center of the universe. Each day the sun rises and sets, creating shadows that come and go, becoming shorter or longer depending on the season. By demonstrating that the laws of the universe were mathematical, the mathematician essentially removed his God as the thoughtful controlling divine mind of known civilization.

Galileo di Vincenzo Bonaiuti, who died in 1642, was imprisoned by the church as a heretic during the Inquisition for openly building on the careful diagrams of Copernicus. But, that vast design they so meticulously laid out and debated to friend and foe for over 100 years, was already mapped out in hemispheric clay pots several hundred years earlier right here in the Gila River watershed where people now known as the Mimbrenos lived from 600 to 1150 A.D.

Ancient concentric circles and circle motifs are found incised on stones throughout this area and beyond. Descendants of Mimbres people, Native Americans from Acoma Pueblo identified them as sun symbols representing the increasing levels of awareness as one grows in experience – a diagram of a cosmic sun centered on a path of life that would mirror the vast sky world.

The Mimbreno world, through prehistoric artifacts, was uncovered by archaeologists scouring the southern Arizona/New Mexico landscape in the late 1800s and early 1900s. Archaeologists recovered innumerable sherds of pottery. Intact bowls ranging from two inches to 20 inches in diameter were carefully revealed with soft brushes in ancient settlements, admired and packed up to be sent far away to university museums, analyzed, archived in numbered rows, to be brought out to authorized specialists. Looters took the rest.

Eventually, Mimbres black and white painted designs became a source of wonder. Anthropologists studying the designs find two clear records of the Mimbreno world as the ancestors understood it. They left precise paintings of their activities such as hunting rabbits and birds, ceremonial activities, fish, game and predator figures, giving birth and, equally revealing, they left complex geometrical designs, all painted inside hemispheric domes of fired clay.

Those early painters paid remarkably close attention to the equal division of black and white areas of paint as they laid out their perceptions of an active spherical space that everyone could see and discuss while they were being painted. These motifs in motion of dynamic black and white spaces expressed an encoded sense of balance integrated into the forces of sun and season, heat and cold, plant cycles, animal movement and human social organization.

Mimbrenos incised their designs onto stones, painted them inside caves, onto carved flat wood ritual pieces and elegant woven fabrics to be worn on special occasions. Their world was inside and outside their heads just as the world of nature is inside and outside us over 1,500 years later.

The painters gathered clay in the surrounding landscape, pulverized the clay, carefully added water and prepared it for making fragile earthen ropes wound from a center point to construct a clay spiral rising into a bowl. It was then smoothed inside and out becoming hard enough to manipulate and paint.

That clay spiral became a spatial three-dimensional architecture of a white hemisphere that Native Americans often equate to the Sky World. While we see the flat reproductions of painted designs on pages, they were embedded in a far different space for their paintings defying the conventional Renaissance perspective that we take for granted.

Black and white spirals were the earliest designs known to be made by the early Mimbrenos. A few generations later, the spirals were being painted in quadrants and halves of the internal design of the clay hemispheres. They were being painted in bands framed by concentric circles parallel to the rims, interlocking other equally spaced motifs such as terraced mountains and highly energetic zig zag motifs.

As the focus on dominance shifts between the black to the white space and back again, the viewer experiences the ambiguity the Mimbres painters were playing with according to art historian J.J. Brody. Just as one adjusts to everchanging natural conditions, the paintings invoke flexibility of perception within an ordered cosmos.

The spiral could be seen everywhere in the landscape around them. Water itself spirals in its journey down creeks, bean plants stretch long tendrils out to find and wind their way up supports, corn spirals out of its seed into the earth atmosphere, the stars spiral around the northern star. Wind evokes spirals in the everchanging clouds overhead and forms fine dust and leaves into small tornadoes. The Hopi Pueblo language perceives the spiral motif as a representation of union, relationship and/or friendship not only between humans but between qualities in nature.

All sorts of opposite but equal images began to appear. Fish and game animals were a favorite in the bowls; feet, hands, animal footprints and birds faced each other in the white and were incised on stones as far away as Three Rivers Petroglyph Site in south-central New Mexico. Corresponding petroglyphs interacted with the sun each day in an additional cosmic dance to the ones discussed at hearths of the homelands. The Earth was in a cosmic dance with the sun painted on the clay and carved in the stones.

Author Joan E. Price lives in Tularosa, New Mexico. She is developing an educational exhibit of the spatial and geometrical aptitude of the ancient Mimbrenos cultural landscape.