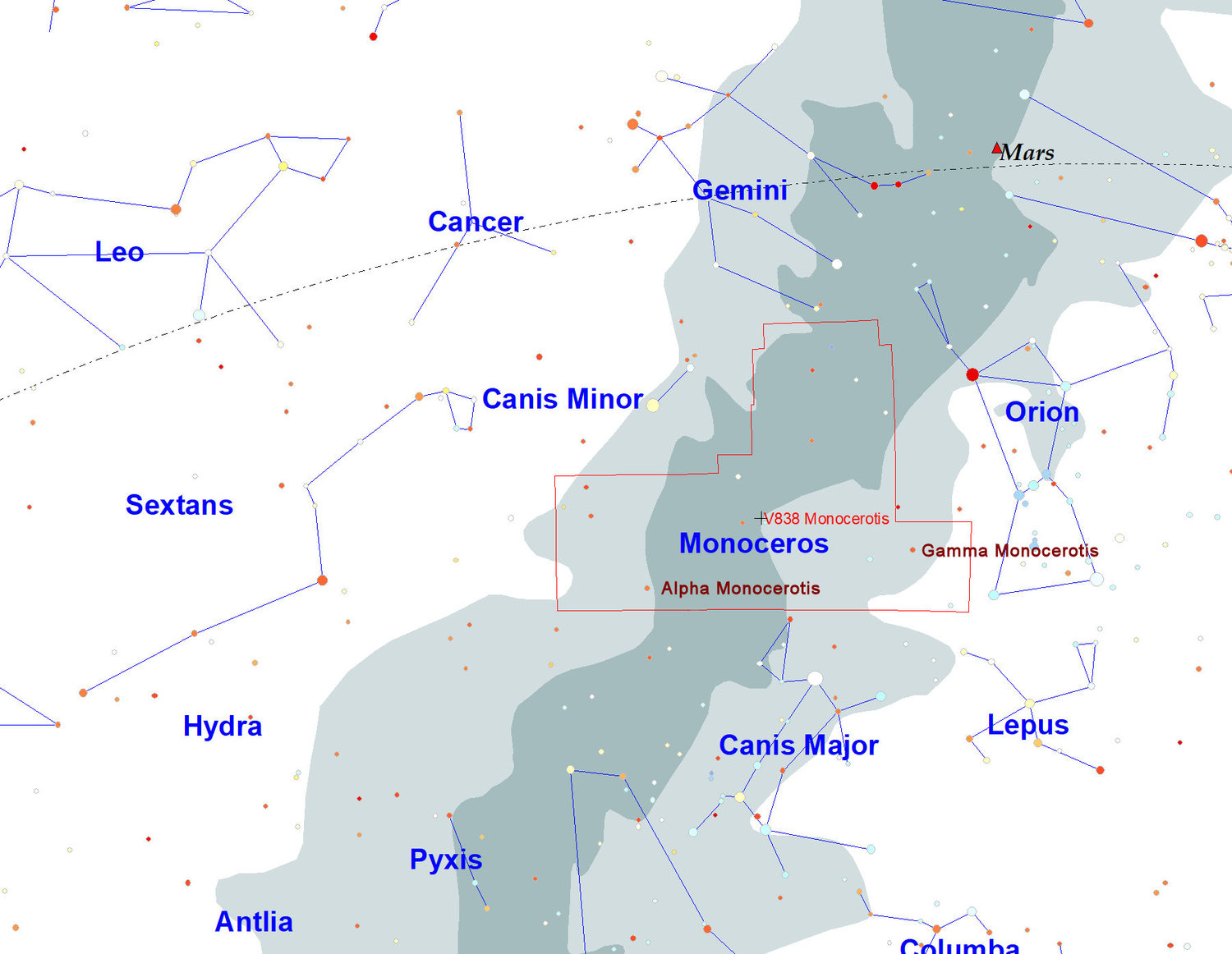 Monoceros, the Unicorn, is composed of faint stars, but you can easily find it as it is surrounded by brilliant first magnitude stars. To its west is are the bright stars or Orion. Below it is the brightest star in the sky, Sirius, in Canis Major. The final beacon is Procyon in Canis Minor to the northeast of Monoceros. The Milky Way runs right through the center of this constellation, providing many deep sky objects like the Rosette Nebula, a complex hydrogen cloud surrounding a year open star cluster.
Posted Thursday, April 1, 2021 7:16 pm
By Bert Stevens

If you have never seen a unicorn, all you need to do is look halfway up in our southern sky. Just above Canis Major and its brilliant star Sirius, you will find the constellation of Monoceros, the Unicorn. The name derives from mono- for one and -ceros for horn. This one-horned animal is composed of only faint stars, but it is encircled by three constellations with brilliant stars. Orion is to the west, Canis Minor to the northeast and Canis Major to the south.

Monoceros itself is composed of fourth magnitude and fainter stars. A modern constellation, it was introduced to the world in 1613 by Dutch-Flemish astronomer Peter Plancius. He had become interested in celestial mapmaking and helped create a celestial globe in 1592. In the process, he realized information on the stars in the southern hemisphere was sadly lacking.

Plancius trained Peter Keyser, the chief pilot on the ship Hollandia, to make measurements of the positions of stars in the southern sky. Between Keyser and his colleague, Frederick de Houtman, they cataloged 135 southern stars during their southern voyage. Even though Keyser died in Java, the catalogue made it back to Plancius. From this catalogue, he created 12 new constellations in 1598, all of which are part of the 88 modern constellations. Fifteen years later he revealed a ten-and-a-half-inch celestial globe along with eight more constellations, including Monoceros. Only two of this later group survived to modern times, Monoceros and Camelopardalis.

The brightest star in Monoceros is Alpha Monocerotis which glows at a paltry magnitude of +3.9. Located 148 light-years from Earth, this star is twice the mass of our Sun, but 10 times its diameter. With a spectral class of G9, it is just a little yellower than the Sun. These characteristics point to a massive star that has finished burning hydrogen in its core and it is now burning helium. The extra energy has expanded the diameter of the star, allowing the surface to cool to its current color.

A +15.6-magnitude blue star near the center of this constellation was unremarkable among the other stars, that is until Jan. 6, 2002, when amateur astronomer N. J. Brown (Quinns Rocks, W. Australia) saw it brightening on the photographs he took every clear night and compared night-to-night. It was designated V838 Monocerotis, the 838th variable star discovered in the constellation. The rate at which the star brightened made it appear to be a routine nova.

Astronomers took spectroscopic observations of V838 and were surprised to find that there was not much hydrogen in its spectrum. A normal nova is the result of hydrogen building up on the surface of a white dwarf star. When enough hydrogen has accumulated on the surface, the increasing temperature and pressure finally initiates explosive fusion burning. This blows the hydrogen that was not fused into space and it appears in the nova’s spectrum. V838 was missing this hydrogen signature in the spectrum, so it was not a normal nova.

This star continued to brighten slowly until Feb. 6 when it brightened from magnitude +11 to a maximum magnitude of +6.75 in less than a day. After that, it started to fade, but then brightened again in early March from magnitude +9 to +7.5 in only a few days. After this spike, it continued to fade back toward its original magnitude. On March 17 a telescope near Flagstaff, Arizona, detected a light echo surrounding this star.

Light echoes appear as a sphere or ring around the star. It emerges as the light from the rapidly brightening star illuminates surrounding gas. Since the flash travels outward at the speed of light, the distance to V838 can be calculated by measuring the time since the brightening began and the diameter of the light echo surrounding the star. This puts V838 at around 20,000 light-years away from us.

This outburst is unique, being dubbed a luminous red nova. While to exact mechanism of the outburst is uncertain, it is most likely a mergeburst. V838 would have been a pair of young stars, one an eight solar mass main sequence (normal) star and the other a one-third solar mass star that was still forming. The smaller star still had its extended atmosphere and friction between it and the larger star eventually caused the smaller star to collide with the larger star, setting off the outburst.

The smaller star’s extended atmosphere provided the gas for the outburst to illuminate, forming the light echo. Young multiple star systems can be unstable, which lead to V838’s merger. The Hubble Space Telescope has provided some beautiful images of the light echoes from this star. Astronomers continue to monitor this star and amateur astronomers continue to search the sky for similar outbursts. There are more mysteries still to be discovered.

Still too near the Sun this month to be observed, Venus will be in our evening sky first thing next month. Meanwhile, Mars still graces the evening sky, moving eastward from central Taurus to western Gemini during the month. As it gets dark, Mars is 44 degrees above the western horizon, setting around midnight. The God of War has a disc that is 4.6 seconds-of-arc across, shining at magnitude +1.6.

It’s a long wait for the next planet to rise, with Saturn appearing around 3:15 a.m. Shining at magnitude +0.7, it is moving slowly eastward in central Capricornus. The Rings are 36.8 seconds-of-arc across and they will be tilted down 17.1 degrees with the northern face showing, while its disc will be 16.2 seconds-of-arc across. The Ringed Planet can be found 30 degrees above the southeastern horizon as dawn breaks.

Jupiter crosses from eastern Capricornus into western Aquarius this month. It rises around 4 a.m. and it is 24 degrees above the southeastern horizon as it starts to get light. The King of the Gods has a disc that is 35.9 seconds-of-arc across at midmonth. It shines at magnitude -2.2.

Mercury moves from far eastern Aquarius into Pisces, clipping a corner of Cetus and then passing through the rest of Pisces and almost all of Aries where it finishes the month at Aries’ far east end. Unfortunately, the Sun is also in Aries, so Mercury is lost in the Sun’s glare all month. The Messenger of the Gods will join Venus in the evening sky next month, so get ready for to more planets in the evening and keep watching the sky!