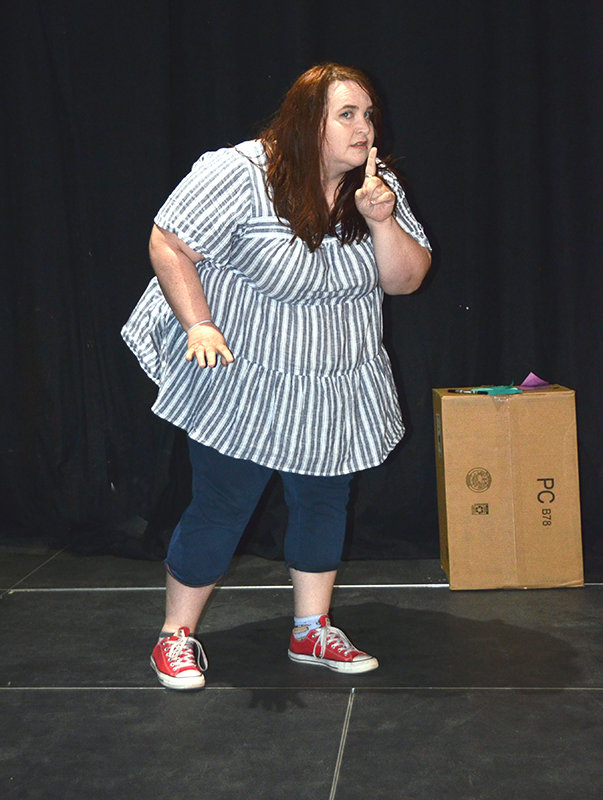 All state public health orders will be complied with, including 33 percent theatre capacity. All audience members will be required to wear masks throughout the performance. “We know the new health order allows completely vaccinated people to not wear masks or socially distance,” Herman said, “but short of requiring vaccine cards, we don’t know how to separate non-vaccinated from fully.”

The play is about a 6-year girl whose mother is in hospital because, according to Dad, “she’s done something stupid.” Mum (it’s a British play) is also finding it hard to be happy. So, the little girl makes a list of “everything that’s brilliant about the world” and worth living for. She leaves the list on her mother’s pillow and knows it has been read because it comes back with spelling corrections. Soon, the list takes on a life of its own.

Gieb stars as the little girl/the play’s narrator and is the only on-stage actor in the show. Audience members “will be invited to play the other roles, from their seats or at a 10-foot distance from Gieb,” in keeping with state public health orders, said Ceil Herman, who directed the play and is the co-owner of Black Box Theatre along with her husband, Peter. She said audience members will also help Gieb’s character put together her list of brilliant things.

Gieb has starred and co-starred in outstanding theatre productions for many years in Las Cruces. Most recently, she was in the cast of “Animal Tales,” which Black Box Theatre presented in its outdoor courtyard in April.

“Every Brilliant Thing” was first performed at the Ludlow Fringe Festival in Ludlow, United Kingdom in June 2013. It premiered in New York City in December 2014.

Tickets are $15 general admission, $12 for seniors and students and $10 for the Thursday night performance only.

Local artists have contributed a wide variety of eclectic artwork to the show, celebrating the fact that Doña Ana County is at the turquoise, or least restrictive, level of the New Mexico Public Health Department’s statewide Covid-19 county-by-county risk assessment framework. Participting artists are

Here are the additional shows in the season: