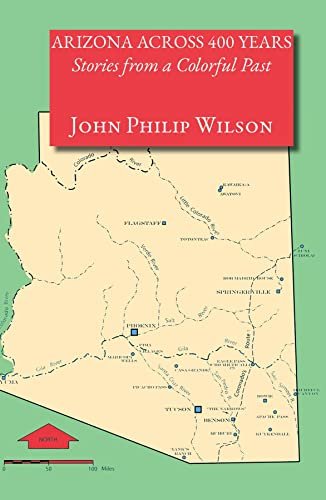 Las Cruces author John Philip Wilson’s latest book, “Arizona Across 400 Years, Stories from a Colorful Past,” is now available, according to a news release from Aero Cordero Promotions.

The book, released earlier this year by Sunstone Press of Santa Fe, “contains 14 well-researched and engaging stories about Arizona’s lengthy and many-faceted history,” the news release said. “They begin with a new view of the route taken by Francisco Vásquez de Coronado, the earliest Spanish explorer in Arizona, while other chapters touch on fascinating and forgotten incidents that shaped the state’s character.

“Many authors have written about the route Coronado took in his 16th Century expedition through the southeastern part of present-day Arizona,” the news release said. “Wilson digs deeper into historical documents to update what has previously been published. He concludes that after 480 years there is still much uncertainty about portions of Coronado’s route, but that ‘some answers to the puzzle… are coming to light.”

Another chapter of Wilson’s book deals with the first corrals in Arizona and New Mexico and how and why they were constructed, Aero Cordero Promotions said.

A chapter about Yuma includes a humorous tale about how hot this southwestern Arizona outpost was for early settlers. Another tells about the two first printing presses responsible for the earliest English-language newspapers in the Southwest.

This 107-page paperback includes many historical photos, maps, diagrams and references which will help the reader better understand what is included in the book.

Wilson is a Harvard graduate and a retired archaeologist and historical researcher who began his career with the Museum of New Mexico. After 10 years with that agency and two years spent excavating a War-of-1812-period British fort for Parks Canada, he began a 28-year career as a contract archaeologist and historical researcher for utilities, mining and engineering companies, government agencies and Native American tribes or communities in both Arizona and New Mexico. Wilson’s other books include “Merchants, Guns & Money: The Story of Lincoln County and its Wars,” “Islands in the Desert, A History of the Uplands of Southeastern Arizona,” “When the Texans Came: Missing Records from the Civil War in the Southwest 1861-1862,” “Peoples of the Middle Gila, A Documentary History of the Pimas and Maricopas, 1500-1945” and “New Mexico Episodes, Stories from a Colorful Past.”

Wilson and his wife, Cheryl, and their cat, Seth, live in Las Cruces.

Wilson’s book is available online through Barnes and Noble, amazon.com., Ebay.com., Thriftbooks and other online booksellers.  Local booksellers may stock it as well.