Las Chepas and the Wall 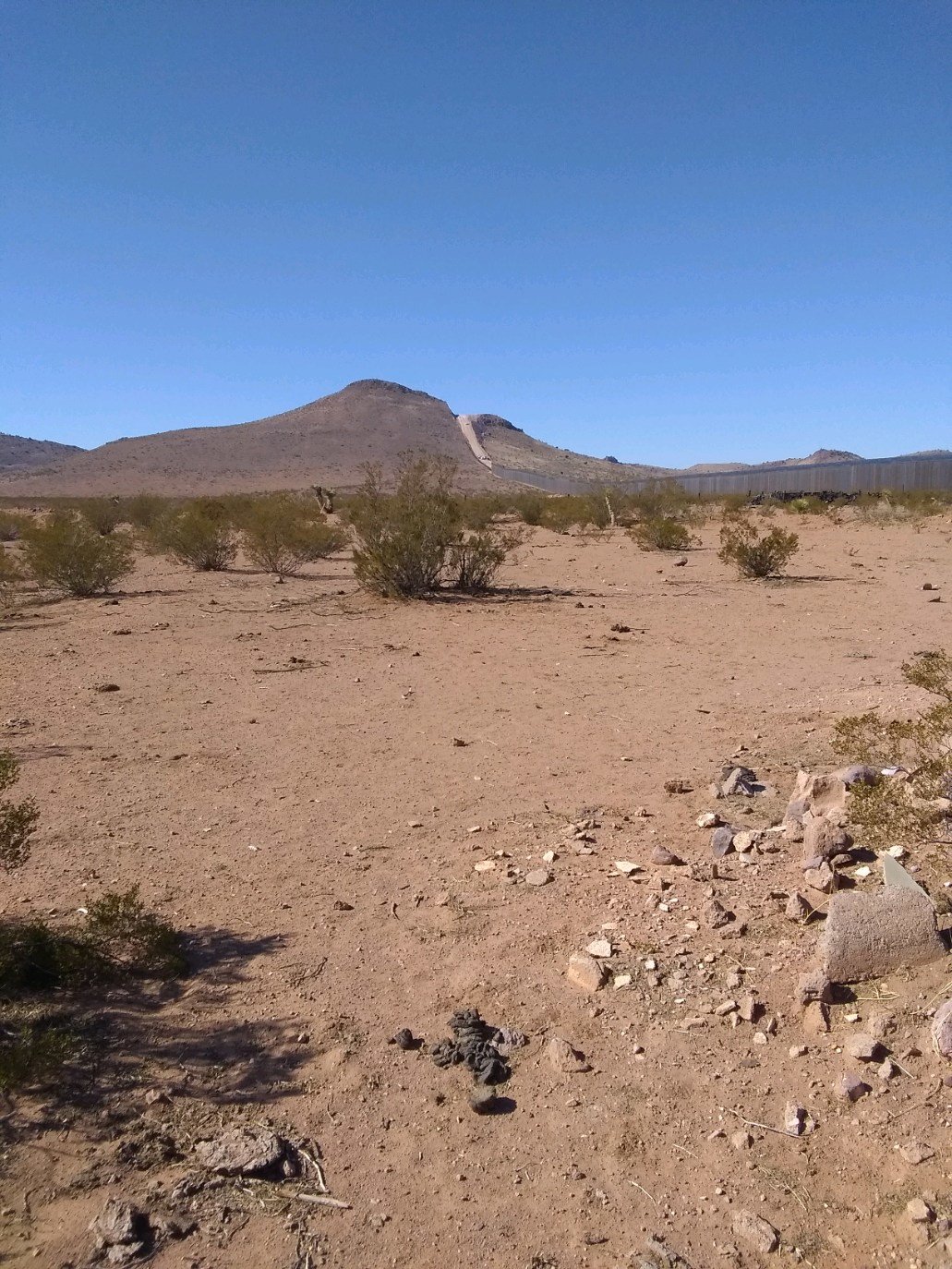 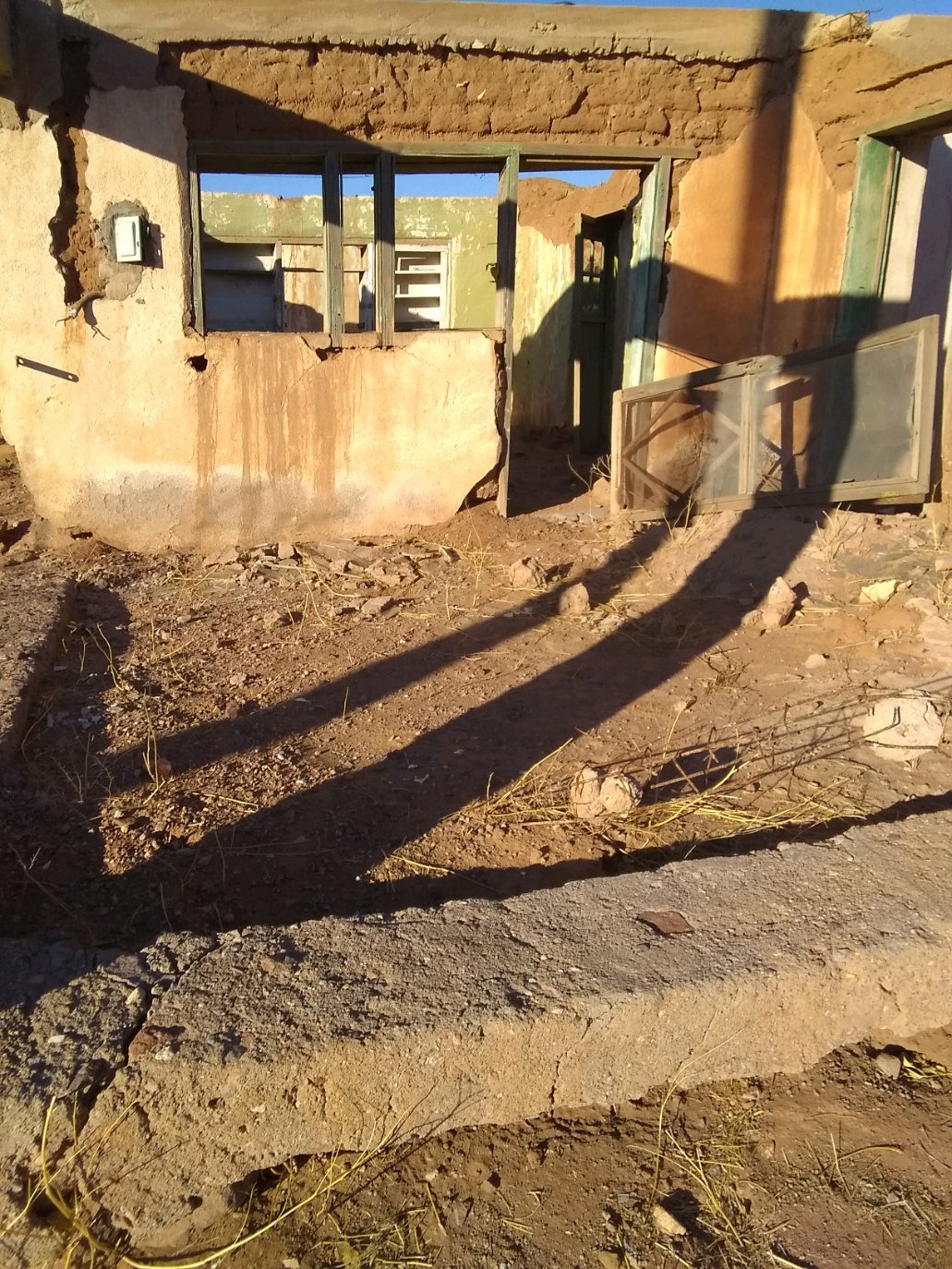 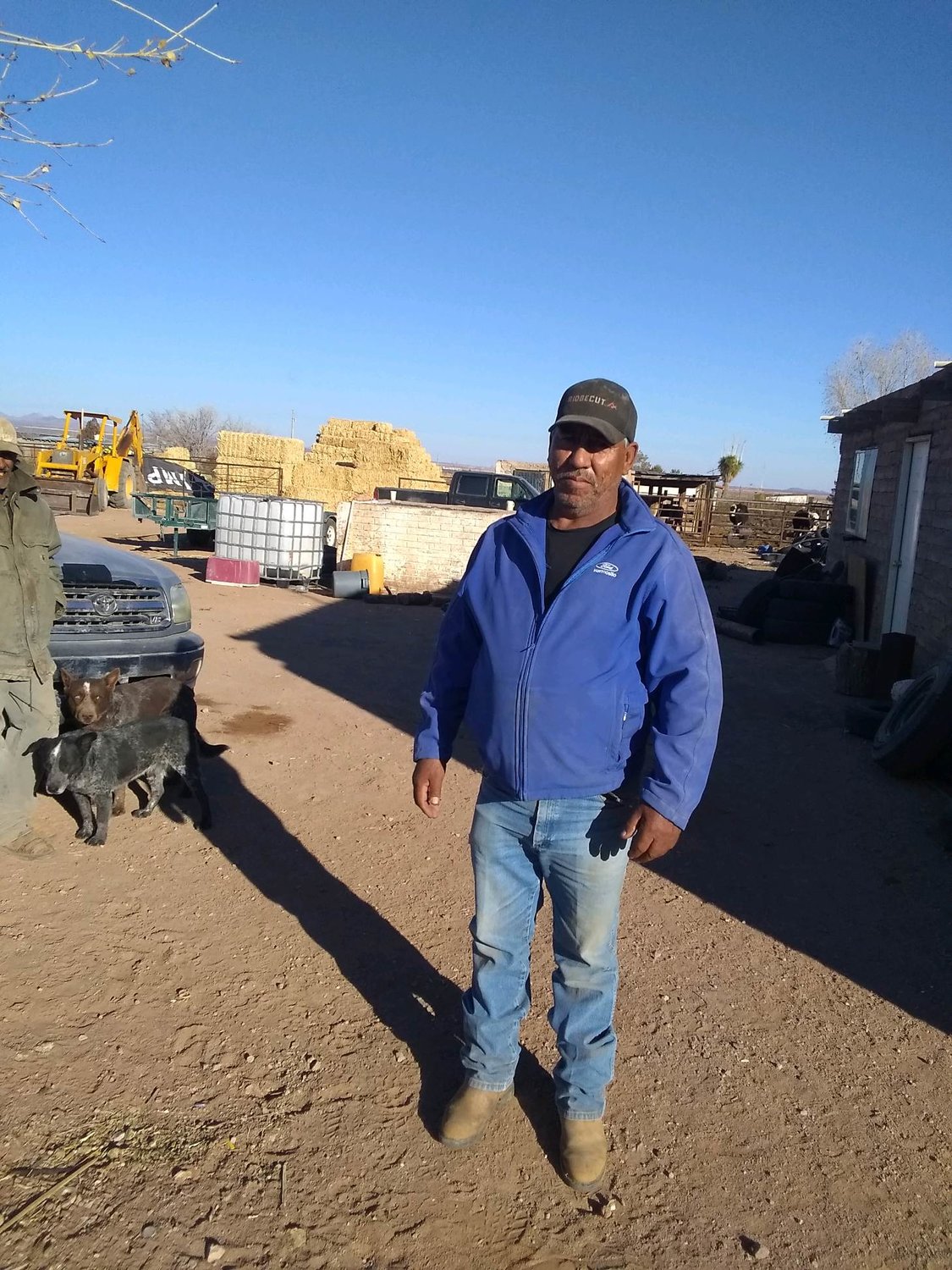 After a broken appointment in Palomas, I felt aimless for a while, driving around in the morn-ing sunlight. So I started out in the direction of Las Chepas, 18 miles west. I was to find out there was a lot going on in that mostly abandoned settlement.

This was two days after the staggeringly brutal assault on the U.S. Capitol building by Donald Trump’s followers. But the long rutted road and the broken-down Mexican houses huddling close to the border in Las Chepas made you feel isolated from the world. There was a profound quiet.

The houses are almost all abandoned, but the town still breathes. There are roughly 25 inhabitants, if you include people who come from Deming to work in their fields on weekends. They earn at least part of their living cultivating their ejido land (com-munal lands given by the Mexican government in 25-meter by 25-meter plots).

The road on the United States side of the border had recent-ly sliced through a mountain to the west of town. The 30-foot tall wall was being extended to the Cerro de la Cruz (Hill of the Cross). As pickup trucks and heavy machinery drove over the new road, they looked, from a distance, as if they were driving straight downward (or upward) because it was so steep.

Donald Trump’s border mes-sage at Alamo, Texas, on Jan. 8, two days after the insurrection in Washington, was his celebration of the construction of 450 miles of wall during his time in office, which has cost $16.45 billion. This figure, broken down, is $20.7 million per mile -- in a little town where people earn about $2,000 a year, plus part of what their chil-dren earn on the U.S. side of the border in the fields, at the proces-sors, at Walmart or wherever.

New Mexico and Arizona have the greatest length of the new wall built by Trump — 100 and 226 miles, respectively — and more wall may be built. There is a pause in the building now for a couple of months, until decisions are made about what the Biden administration will do to finish off the project.

Trump had started out during his time in office saying he would build 1,000 miles of fencing. This boast had shrunk to 750 and then to 450 miles as it is today.

A Las Chepas man I spoke to, Epifanio Ruiz, had a good laugh about the border wall because almost no Mexican had crossed in 12 years, he claimed. This was when the U.S. government sent hundreds of soldiers to the border. In 2008, the program of sending the National Guard to the border, including 900 to New Mexico, was completed.

“Everyone has moved to the other side!” he joked. “Their cheeks are all pink!” meaning their skin changed color to look like Anglos. He said the wall looked like the Great Wall of China.

Ruiz said this project is the first time anyone has built an impene-trable wall between Las Chepas and Palomas. Before, there had been much smaller and lower walls and fences intermittently placed to shut off trucks from crossing with people or drugs.

I remember clearly, in the years prior to and after 2010, the yellow bus that waited at one end of the Palomas central pla-za which was usually filled with 50 or so immigrants sleeping or sitting in the grass. The buses brought them out to Las Chepas so they could cross to the U.S. I’d also seen pickup trucks on that road with people lying on its floor so they couldn’t be seen by “la migra.”

Rigo Enriquez, with his own fields and cattle, agreed with Ruiz about the lack of people crossing at this time. In 2000 there were about 70 people in Las Chepas, and there were im-migrants everywhere, many stay-ing in abandoned houses. There were sometimes gunfights there that could be pretty fierce.

Later in the day I visited Las Chepas and tried to walk as close as I could to the Cerro de la Cruz to get a halfway decent photo of it. But a couple of men ap-proached me from the U.S. side of the wall. They told me I had to leave because they were soon go-ing to be exploding some dyna-mite near the road on the Cerro. I asked them about other things and the older man said, “We can’t say.” He said something aboutfour blasts, but wouldn’t elab-orate. What they were doing was broadening the road.

About 2 p.m., there was a huge explosion and maybe 50-foot tall clouds of dust. I wait-ed the rest of the afternoon but heard no more explosions.

Enriquez said he hadn’t heard anything about the ex-plosion in advance.

“Did they ask permission?” I asked.

“No, no, no,” he said. No-body from the border wall project had consulted with any Las Chepas resident. He quietly simmered as we talked about this.

For many years of his life Enriquez had walked up to thecross on the top of the mountain each year on May 3, for their Dia de la Santa Cruz (Day of the Holy Cross) fiesta. That was two days before they celebrated Cin-co de Mayo. Both celebrations were filled with Mexican dancing and food.

The cross is still there at the top of the mountain, barely visi-ble because of its size. Enriquez said they hadn’t held a celebra-tion there for two years. But the cross is still maintained by peo-ple in town.
Another issue facing Las Che-pas is how the wall will break up some species of animals in the area. Rigo Enriquez has tramped around the local hills and the large spring-fed playa, like a shallow lake, south of town. He has seen bobcats, mule deer and javelinas especially.

Kevin Bixby, director of the Southwest Environmental Center in Las Cruces, said there some-times are mountain lions, coyotes, foxes and even the possibility of antelope or a jaguar, which have been sighted in the Bootheel.

“It’s a classic recipe for extinction,” Bixby said. “They’re frag-menting the habitat by building the wall.”

No species is facing imminent extinction, but the wall is increasing the susceptibility to extinction.

“They can’t get to the water source or food source,” he said. A problem in the coming year is that “water is really scarce in southwest New Mexico.”

The space between the posts of the giant wall are only about as wide as a quail, always seen in this part of the world.

I asked Bixby if the border wall builders have ever built tunnels under the walls to help wildlife. He responded with a crisp “no.”

On the last day I went to Las Chepas, I walked partly up the Cerro and beyond, where the wall had been built in pieces here and there, looking very much like the Great Wall of China, as Ruiz said. Or, as I thought, like a roller-coaster.

I saw a Border Patrol police-man, watching from his vehicle, near this section of the wall. We started to talk under the condi-tion that I wouldn’t use his name.

He was Hispanic and friendly. What he said contradicted what the men in Las Chepas had told me. He said that the Deming sta-tion of the border apprehended about 20 migrants per day. It’s possible that migrants don’t pass through Las Chepas anymore.

This man emphasized the criminals he had apprehended, but not the non-criminals. He believes Trump didn’t create the insurrection in Washington, a position I couldn’t possibly hold. He adds that he doesn’t watch TV. He also said the number of migrants crossing was already beginning to increase because of Biden’s gentler attitude toward border crossers.

I wonder what changes there will be in the border when the Biden administration goes into full force. Will they stop the final phases of the wall-building for the sake of humanity and econo-my? Will they make the wall more friendly toward wild animals?
And how long will this su-per-border last, compared with the Great Chinese Wall which lasted about 2000 years? It’s hard to imagine it ever being taken down.