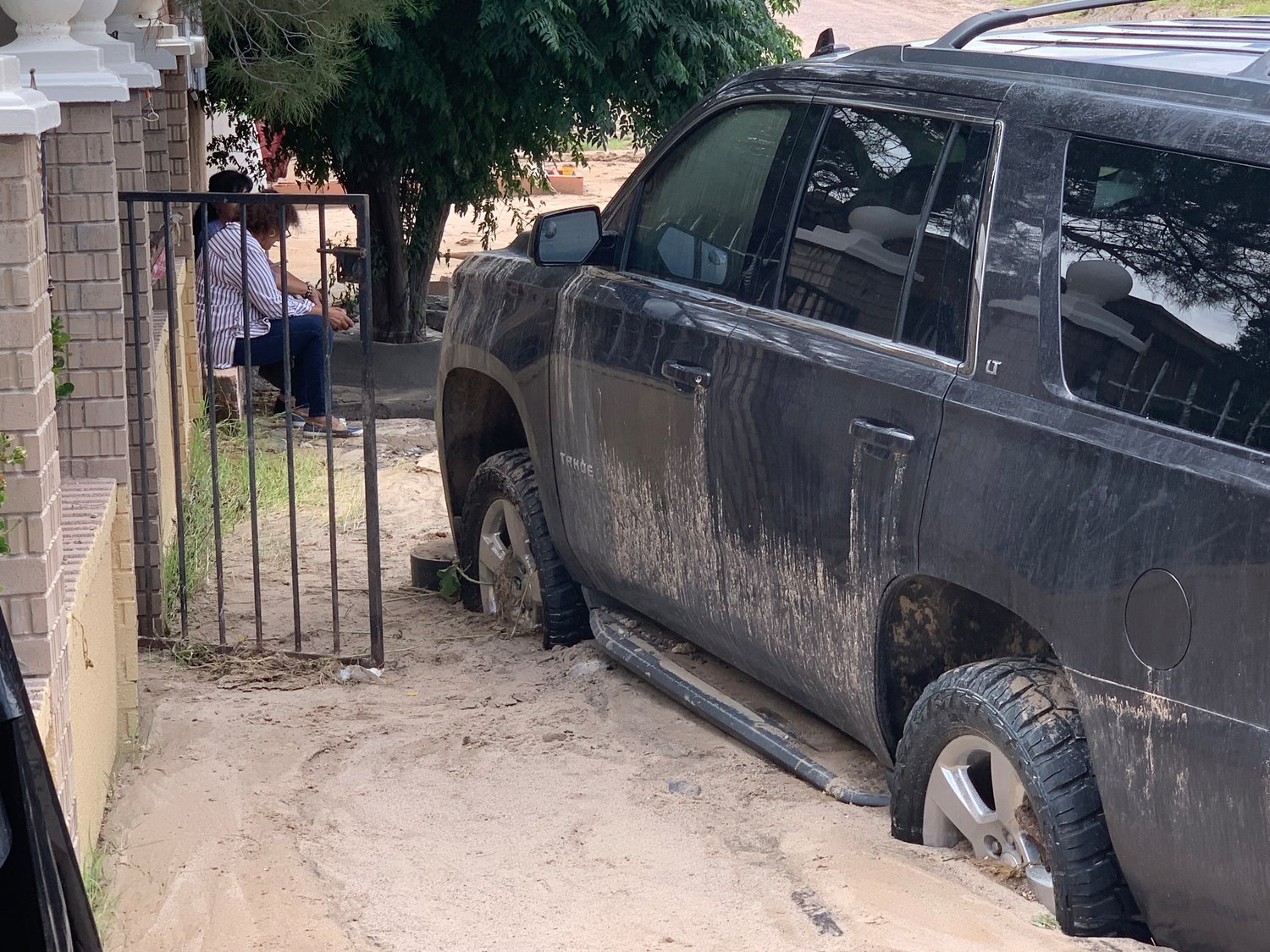 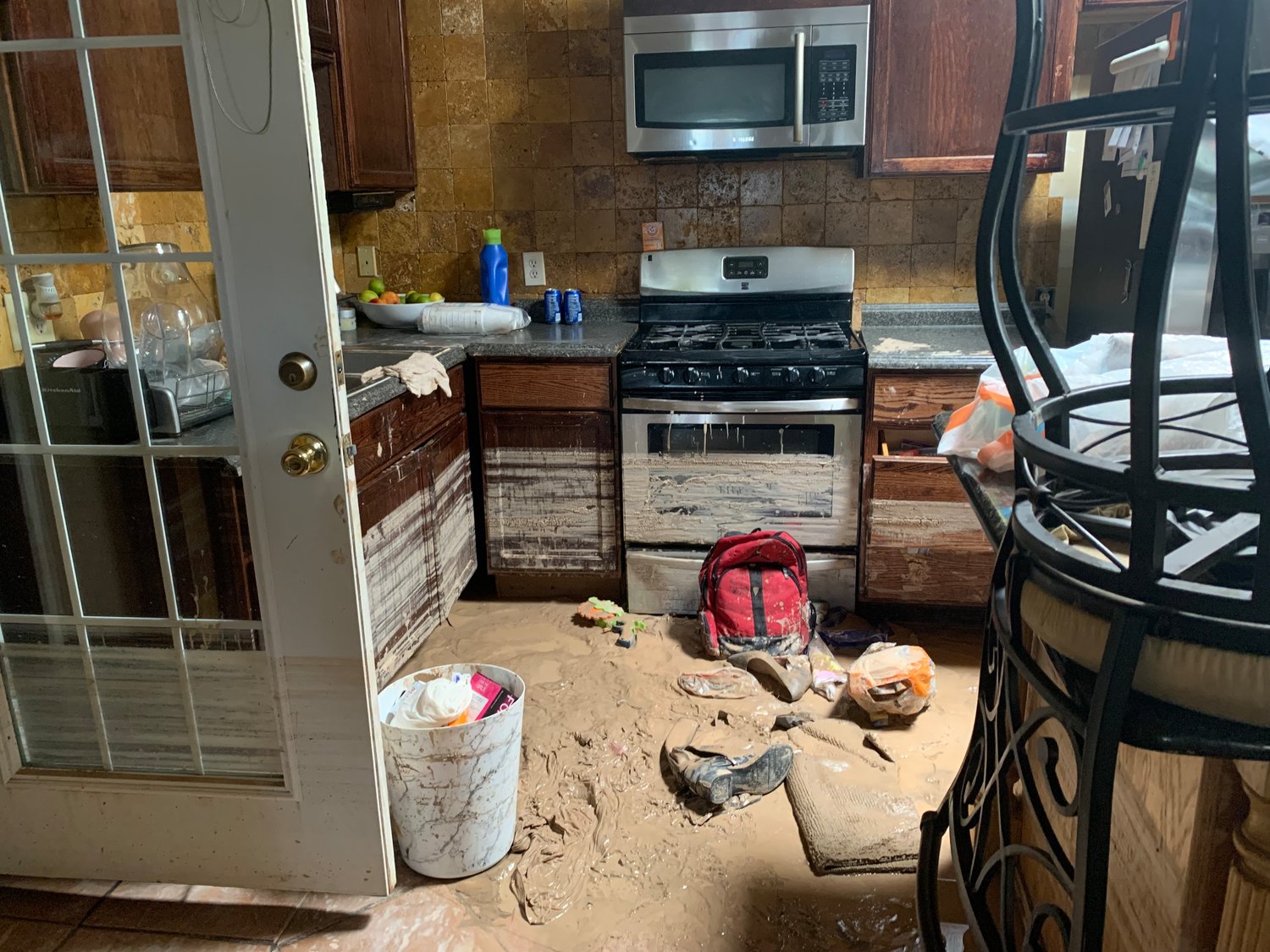 The Aguirre family kitchen will likely never see a meal cooked in it again as the home seems damaged beyond repair following the La Union floods.
Photo by Elva K. Österreich 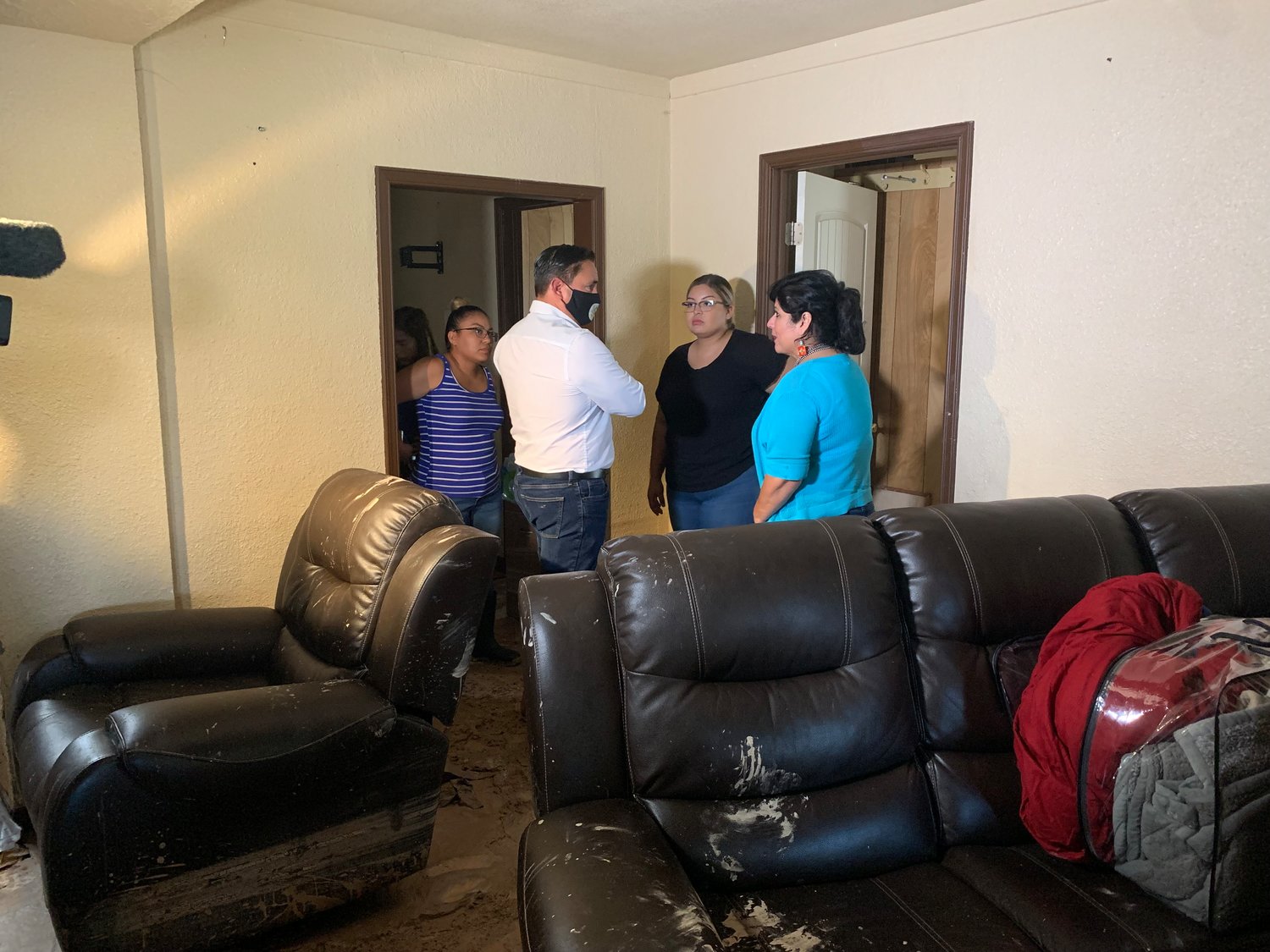 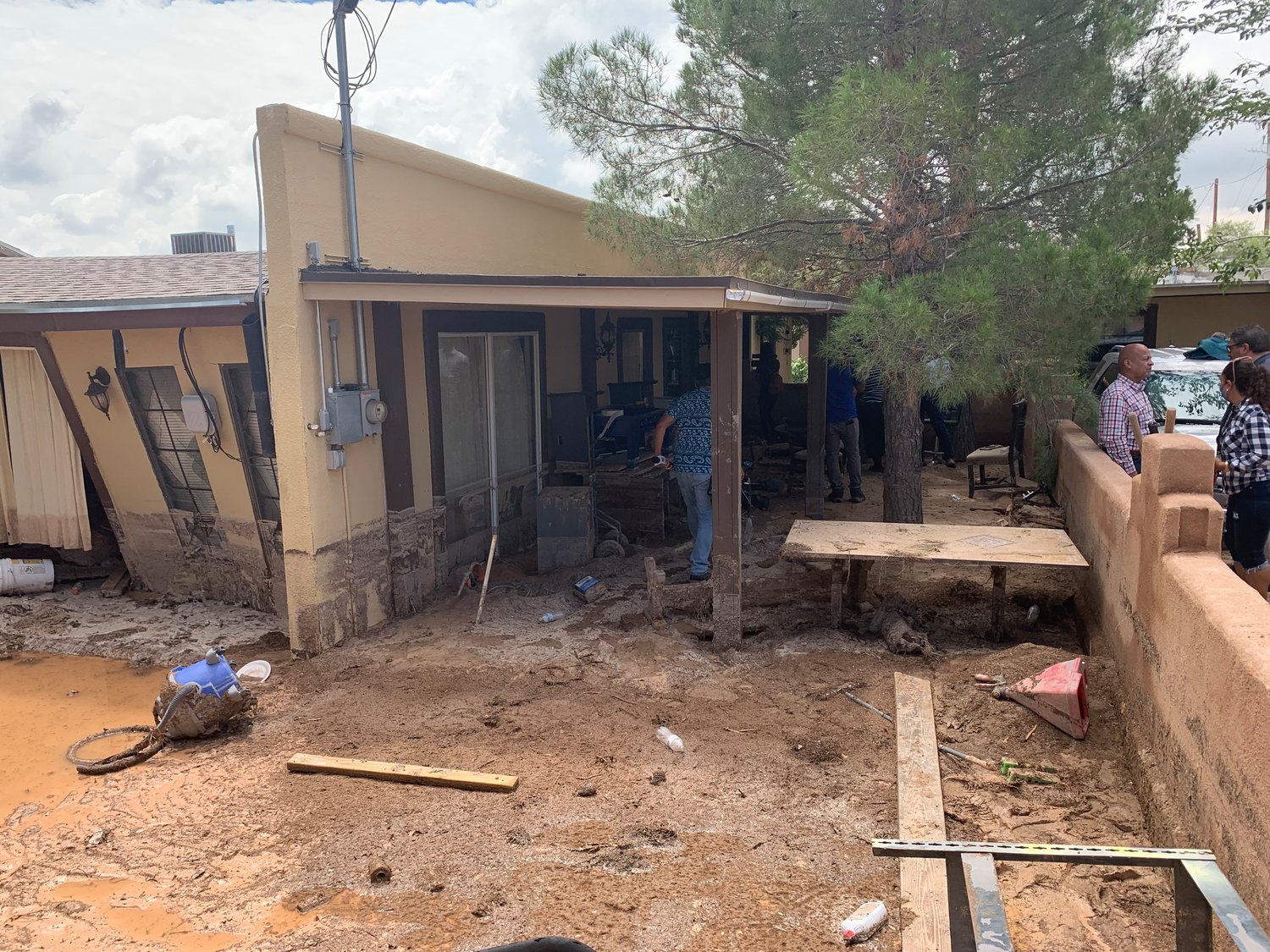 One of the hardest-hit homes by the La Union flood, belonging to the Aguirre family, had a wall collapse in addition to the rest of the mess.
Photo by Elva K. Österreich 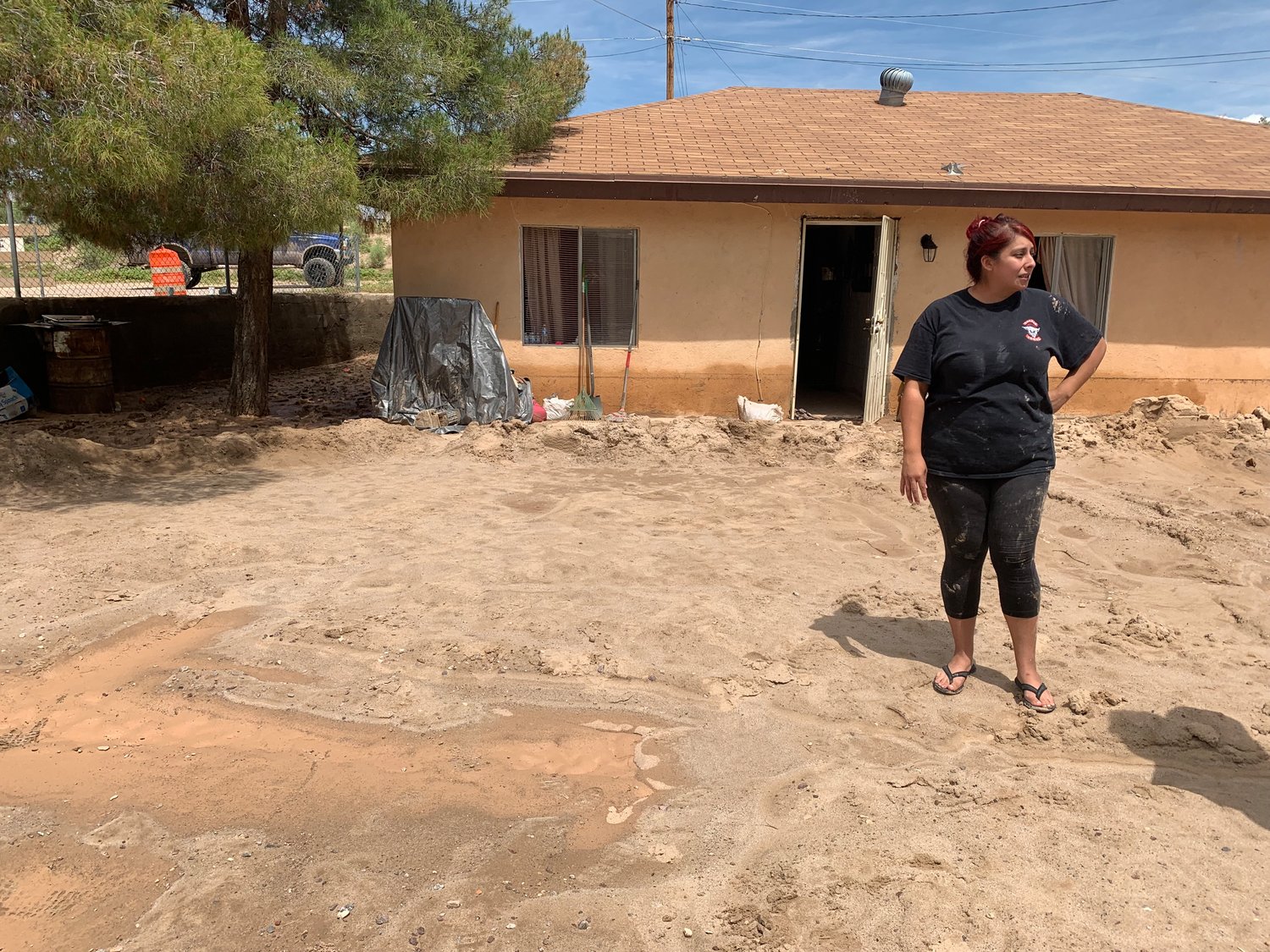 Clarissa Soto stands before the La Union home her father built 37 years earlier where she lives with her mother, daughter and two dogs. The family escaped the water flooding the house through a window.
Photo by Elva K. Österreich
Previous Next
Posted Tuesday, August 17, 2021 3:39 pm
EBID helps with flood cleanup

Elephant Butte Irrigation District Manager Gary Esslinger said the district was busy over the weekend answering calls about dangerous wash-in’s into La Union drains that were causing problems for those trying to use the district’s rights of way to access their homes and fields.

“We also sent out our battery of pumps to help farmers who were inundated with floodwater,” Esslinger said, “We are using our canal and drain system to drain flooded fields. We are working on trying to drain the fields below La Union in order to help get the water off the crops as well as removed from around streets, homes, barns and corrals. It’s going to be a very busy week, just trying to address the wash-ins and keep our pumps running.”

On Dosi Alvarez’ farm in La Union, orchards and cotton fields were standing in floodwater. According to the farmprogress.com, “When the supply of oxygen is cut off to the [cotton] plant and the field is in standing water, the plant can die in as little as 36 hours.”

Two of Alvarez’ longtime farm crew, Lorenzo Esquivel and Ramon Chavarria, raced the clock as they monitored the pumps EBID had loaned to help drain the fields.

“Hopefully we will get a break in the weather,” Esslinger said. “Our flood-control system worked well and we were able to capture floodwater and recharge the aquifer and put a lot of the stormwater in our system.”

The Aguirre home floor is a plane of slippery, sticky mud. Everything is covered with the stuff. A dirt-colored water line can be seen on the walls, curtains and all the furniture almost a yard high where the most recent La Union flood rushed into the house and stayed a while.

Patricia Viramontes said her mother, father and sister lived in the home, which her father had built 31 years earlier. Now, suddenly, the home is unlivable and unlikely to ever function as a home again. Its instability can be seen as one of the walls visibly gave way under the pressure of the water and is canted over.

It was Thursday and Friday, Aug. 12 and 13, that the community of La Union in southern Doña Ana County was deluged by rain and flooding in which several resident families found themselves in trouble and fearing for their lives.

“So, the wall collapsed while we were walking my mom out,” Viramontes said. “We called 911 and said, ‘We need help. We are trapped inside with water coming up,’ but they couldn’t come. There were problems everywhere. By the time they got here, we were already on the street.”

Moses Aguirre, brother to homeowner Guillermo Aguirre, also tells a tale of the flood. The family was escaping through a window when the wall was collapsing.

“We were running back to the ladder (to the window) before the collapse,” Moses said.  “The last one to climb was my brother. Then, the wall came down. The water was like a little tsunami.”

He went on to say the house was uninsured because last time, in 2013, they had been covered by insurance but the insurance refused to pay out for flood damage. So what was the point, Moses said. After the 2013 flood, then Gov. Susanna Martinez had visited the area to view the damage and promised to fix the problem and rebuild the damages. It never happened, Moses said.

This time, Lt. Gov. Howie Morales was on hand to visit with families and view the damage that had occurred. State Reps. Doreen Gallegos and Raymundo Lara, as well as Doña Ana County Sheriff Kim Stewart and Kelly Hamilton, deputy secretary of the New Mexico Department of Homeland Security and Emergency Management, also were on hand to view the damage.

Morales pledged to find help for the families whose homes were badly damaged like the Aguirres and their neighbors on both sides.

“It was extremely heartbreaking to see what these families have endured in the past few days,” Morales said following the La Union tour. “But this is not new to them, they have experienced that in the past and are frustrated that it happened again. It was important to be here to experience the impacts, that way I can help advocate on their behalf as well as on the community’s behalf to provide some type of resources for them.”

During the drive from La Union back to Las Cruces, Morales spent his time on his phone doing exactly that. He said county and state governments are unable to directly provide relief funds because the damage is on private property and there are antidonation clauses in place. But while long-term solutions are being explored, from FEMA to the Army Core of Engineers, he also connected with the Community Foundation of Southern New Mexico which set up a fundraising link for the families at cfsnm.fcsuite.com/erp/donate/create?funit_id=3112

“All the material things can be replaced but there is sadness that their family homes were destroyed,” Morales said. “I was specifically moved by the story of one of the daughters who started school this week at New Mexico State University but wasn’t able to attend because her car wouldn’t start because of the damage. These families have lost everything but still have that generous-giving spirit.”

Hugo Cruz, part of the Aguirre family, said the flood was a horrible experience.

“Mother nature is a beast,” he said.