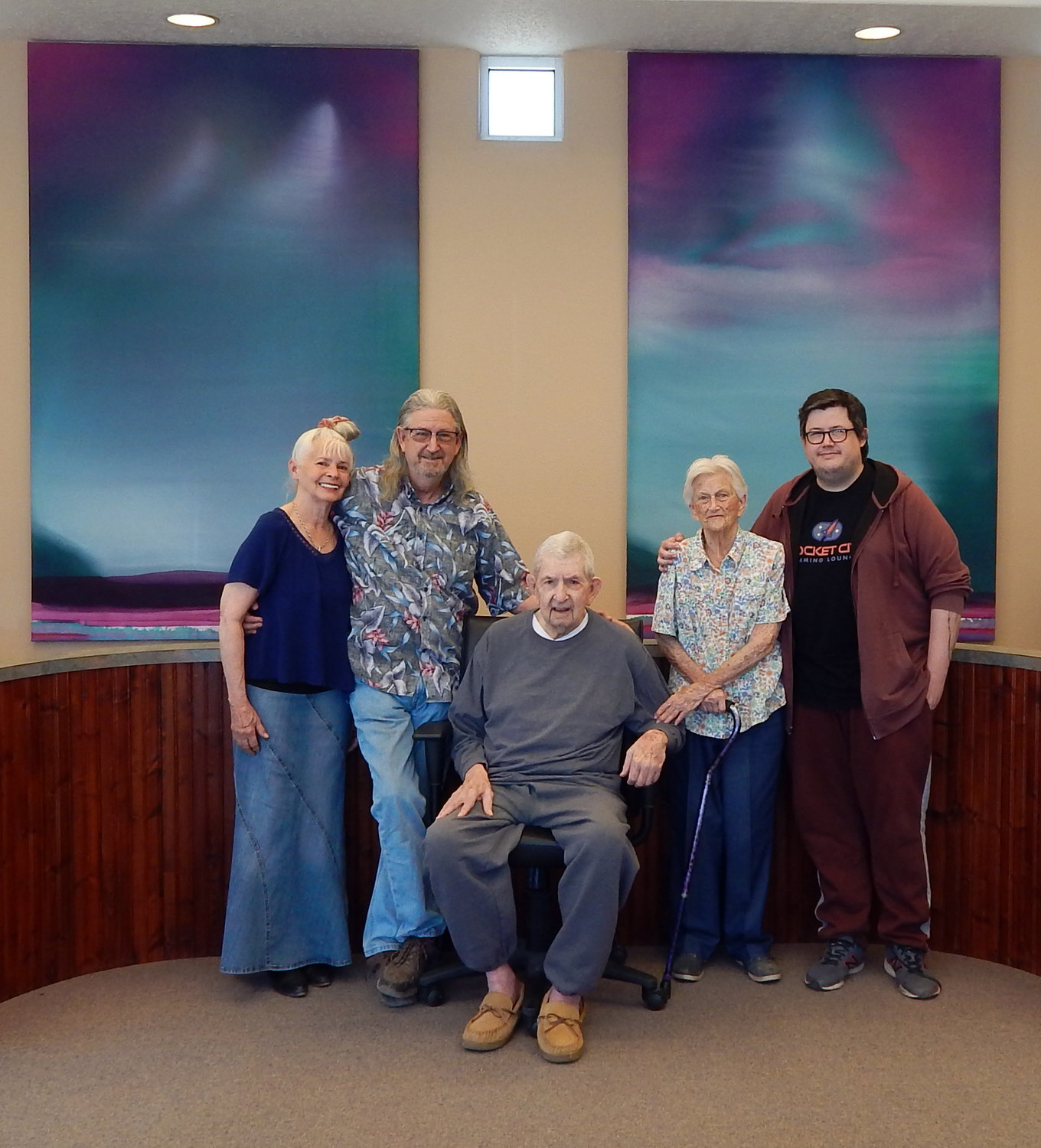 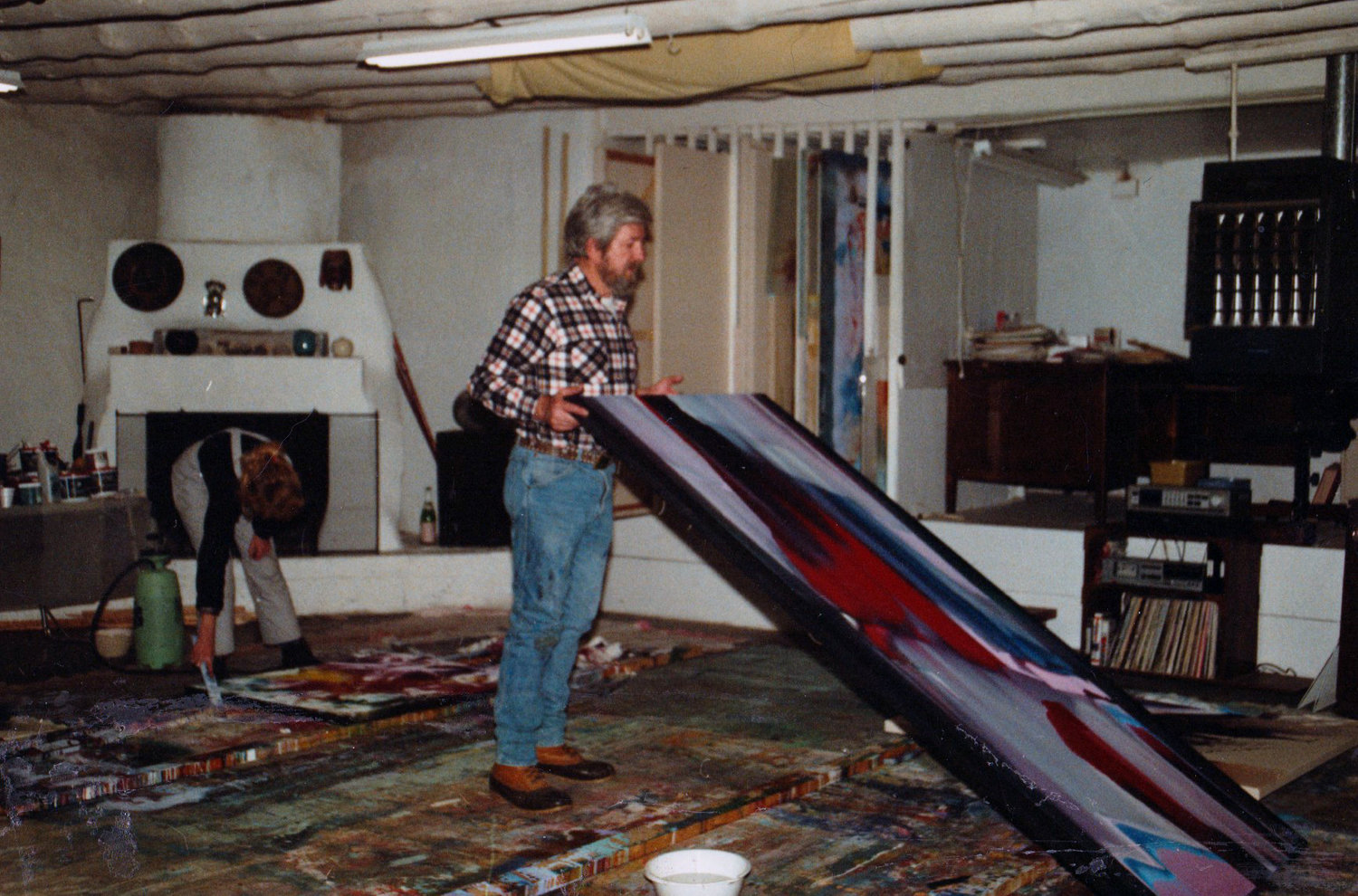 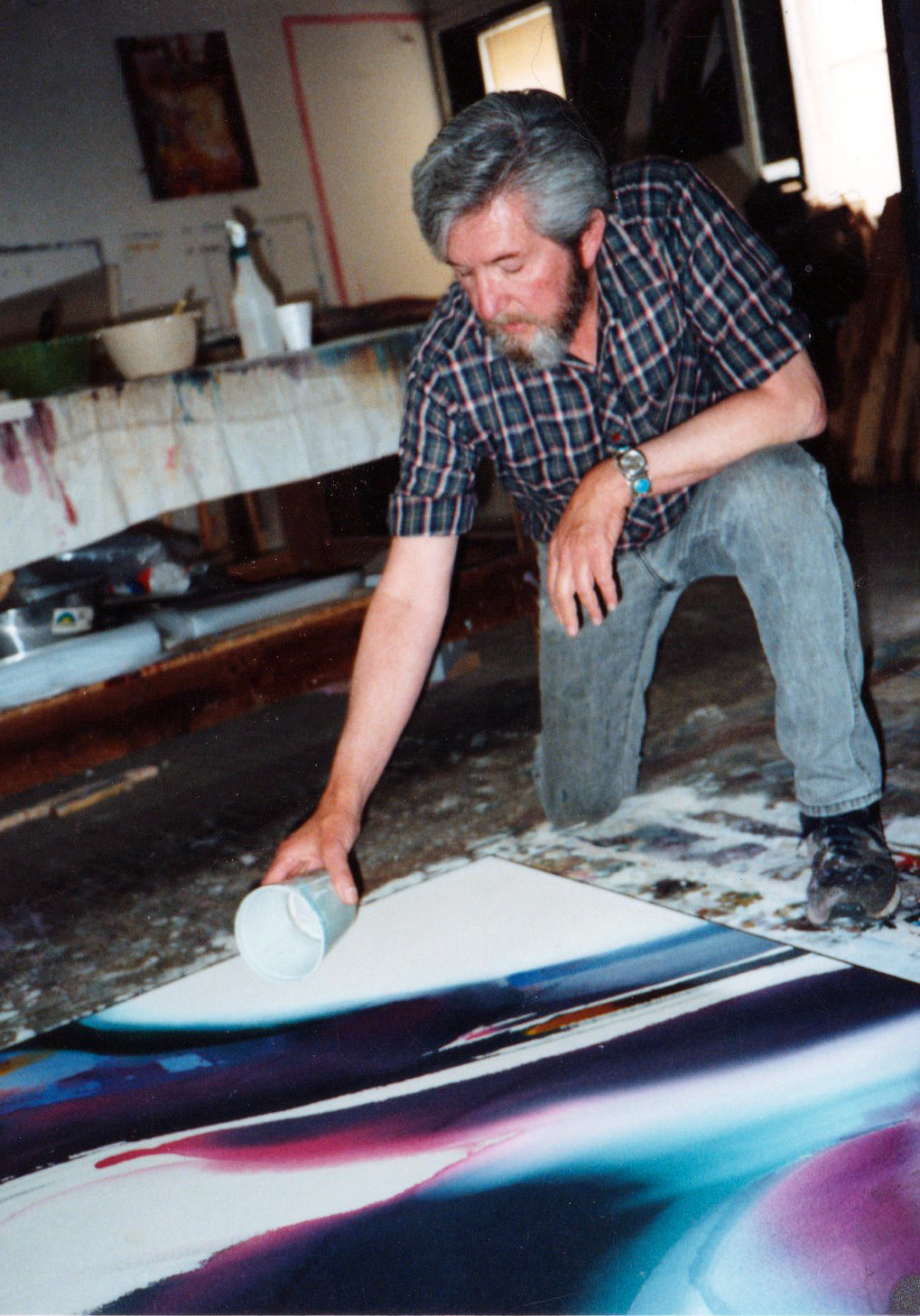 “We want Town Hall to be a showcase for local artists,” Mayor Ray Dean said.

Jim and Fran Mack moved to Carrizozo in 2001.

A decade before, the Macks lived and worked in their gallery in nearby White Oaks. Earlier in his career, Mack taught drawing, painting, design and composition and art history in California and Hawaiian high schools and colleges before dedicating himself to art full time in 1971.

In the past four decades, the Macks lived and painted in Hawaii, Taos, San Miguel de Allende, Mexico and Washington state, before settling down for good in south-central New Mexico.

Jim Mack paintings are acrylic on raw or lightly washed large-scale canvasses that Fran and he stretch themselves. With the canvas on the floor, pouring the paint and lifting from the ground up, abstract shapes emerge. The first impression of a Mack work is of a monumental watercolor, but as he adds layers of color, denser areas are created. The end result is a push-pull effect of translucency against opaque areas with energy created from the friction of a work that depends on both spontaneity and careful manipulation.

While Mack’s technique and scale lend themselves towards evoking the transcendence inherent in Western landscapes, it is the use of color that defines Mack’s work. In “Desert Storm Break,” the peaceful blues and turquoise are punctuated by symbolic light high up in the piece, streaking out and downward from above, like virga during a thunderstorm. Magenta and purple ground but also draw the viewer’s attention upward. The horizontal bands of color near the bottom of the painting allude to mountain and mesa shapes that are transposed by a light, jagged line resembling a wave break.

While the color forms and scale of work suggest landscapes, the abstracted shapes hold their own power, individually and through their relationships to other forms. These are not interpretations of place; they are meant to convey the feelings of the artist to and within that place. Although personal, they touch on something universal and even spiritual, the excitement of that push-pull extending beyond the surface. Just as the paint runs off onto the floor, refusing to be confined by the canvas, so is the experience of standing in front of a Mack work and sensing so much more beyond the shapes presented and even the painting itself.

Mack’s paintings have been the subject of exhibitions in the Russell Senate Rotunda in Washington, D.C., Stanford University, Colorado Springs Fine Arts Center, the Hawaii Academy of Art, Oakland Museum of Fine Art, Elaine Horwitch and Suzanne Brown Galleries in Arizona and the Jack London Square Festival in California, among others. He has been featured in numerous articles and his works can be found in private, corporate and public collections across the country.

Ivy Heymann, a potter living in White Oaks, remembers when the Macks moved to the small ghost town of White Oaks and the impact they had there and on the artist community in neighboring Carrizozo.

“We were stupid with awe,” Heymann said. “By the time he came here from Taos, he had a repertoire of painting. He already had his own style, but he also knew so much because of his teaching. I came to see how his use of color changed depending on where he lived, and it was always a blast to watch him work. He was and still is our art guru”

“Jim Mack has been an inspiration to many Carrizozo artists,” Donazetti wrote in an email.  “We would often visit him in his studio where we would talk about art and his process while his wife Fran provided coffee and treats.  Jim and Fran have always been generous with their time and talents. Personally I learned a lot from Jim. His influence enhanced my own painting. Jim is our artist emeritus, a generous, talented artist.”

In addition to sharing his knowledge and insights, the couple became beloved members of the communities. Fran helped organize a White Oaks Studio Tour, and Mack’s paintings were featured in Carrizozo Studio Tours. The couple’s life experiences, including his as a veteran of World War II fighting in the Battle of the Bulge and hers as a baker, hostess and entrepreneur, added to their shared adventures in art. A modest Fran is quick to point out the importance of family, how proud she is of her husband and his accomplishments.  In June, the couple will celebrate 74 years of marriage.

The Mack’s influence has benefited Carrizozo in other ways as well. Jim Mack Jr. and his partner, Palla Duncan, own and operate Rosey’s Pizza on Central in Carrizozo and the Mack’s grandson, Ian, recently returned from a tour in Afghanistan.

The unveiling of the Mack paintings, however, is especially touching for the family.

“Dad has been doing this for a really long time, and, while he’s had good success and recognition, I think this is a highlight for him and my mom, especially given how much they both love being in Carrizozo and being part of the Carrizozo community,” Jim Mack Jr said.

For many in the community, the paintings in Town Hall represent acknowledgement of Jim Mack but of south-central New Mexico’s nationally-known but hidden gems.

“I'm delighted that the Town of Carrizozo has recognized a major talent,” Donazetti wrote.

Covid restrictions were in place during the unveiling, and only a few people could attend the informal ceremony. The paintings occupy the entire wall behind the council chamber desk. All agreed that it was the perfect setting for the piece.

“I cannot help but feel like the light from above is a reminder of the importance what goes on here,” Palla Duncan said, a painter herself. “The light coming down and then hitting and moving outward conveys a sense of balance and clarity that hopefully guides the decisions made in this room on behalf of the entire community.”

Mack loaned “Desert Storm Break” and another piece to the town. Carrizozo Works, Inc., a community and economic development not-for-profit, helped with the framing and Chris Rilling was responsible for hanging the pieces. A public ceremony will take place at a later date.