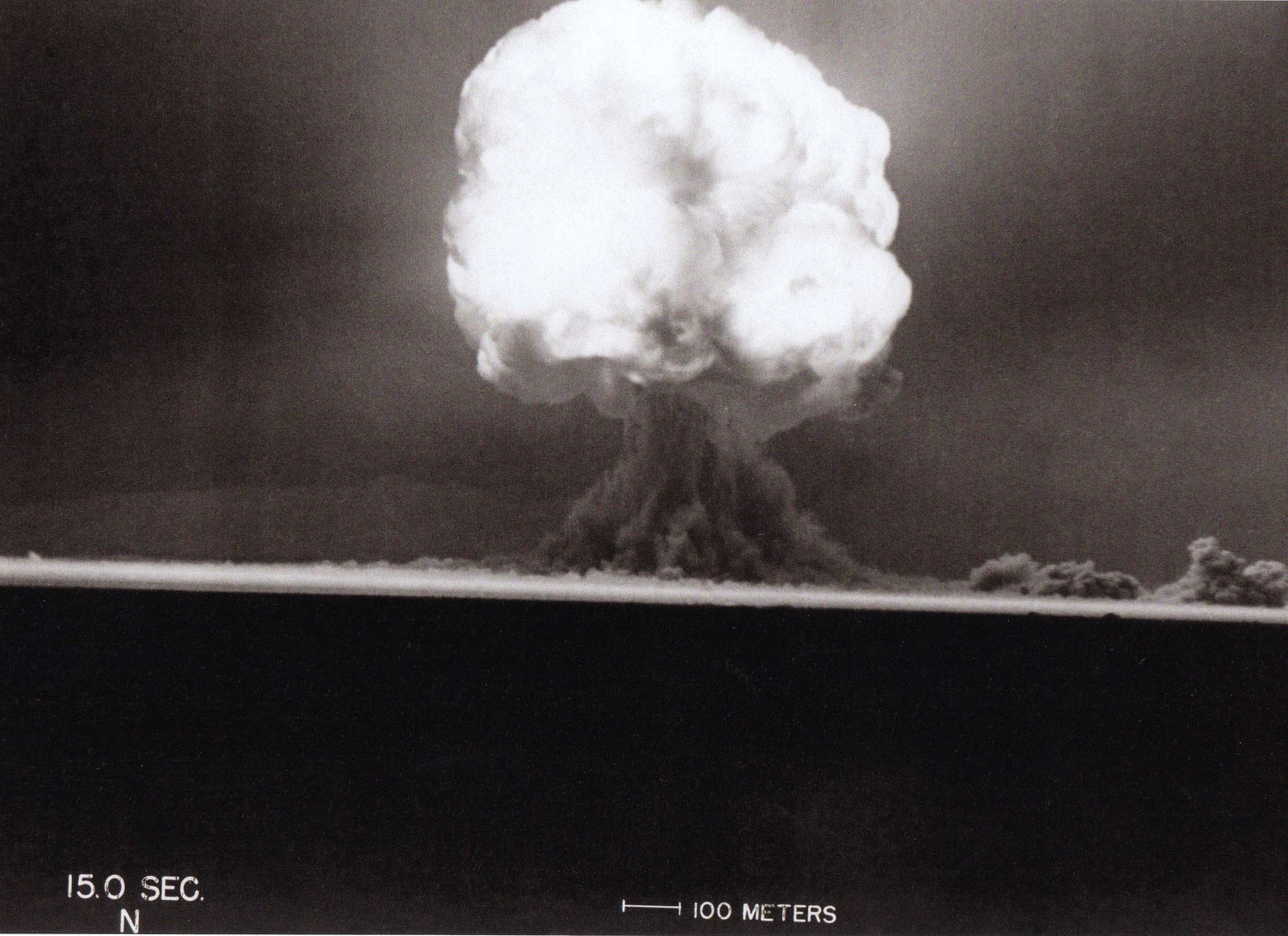 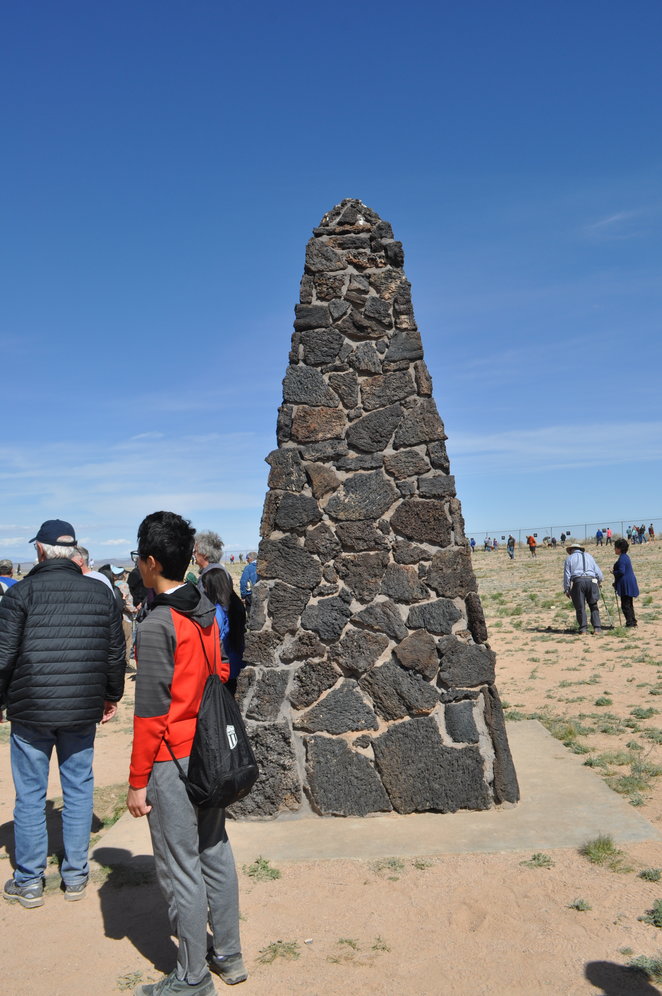 An obelisk stands today at the Trinity Site commemorating the first atomic bomb to be set off in the history of the world. The site is generally opened twice a year to visitors who visit from around the world.
Photo by Elva K. Österreich 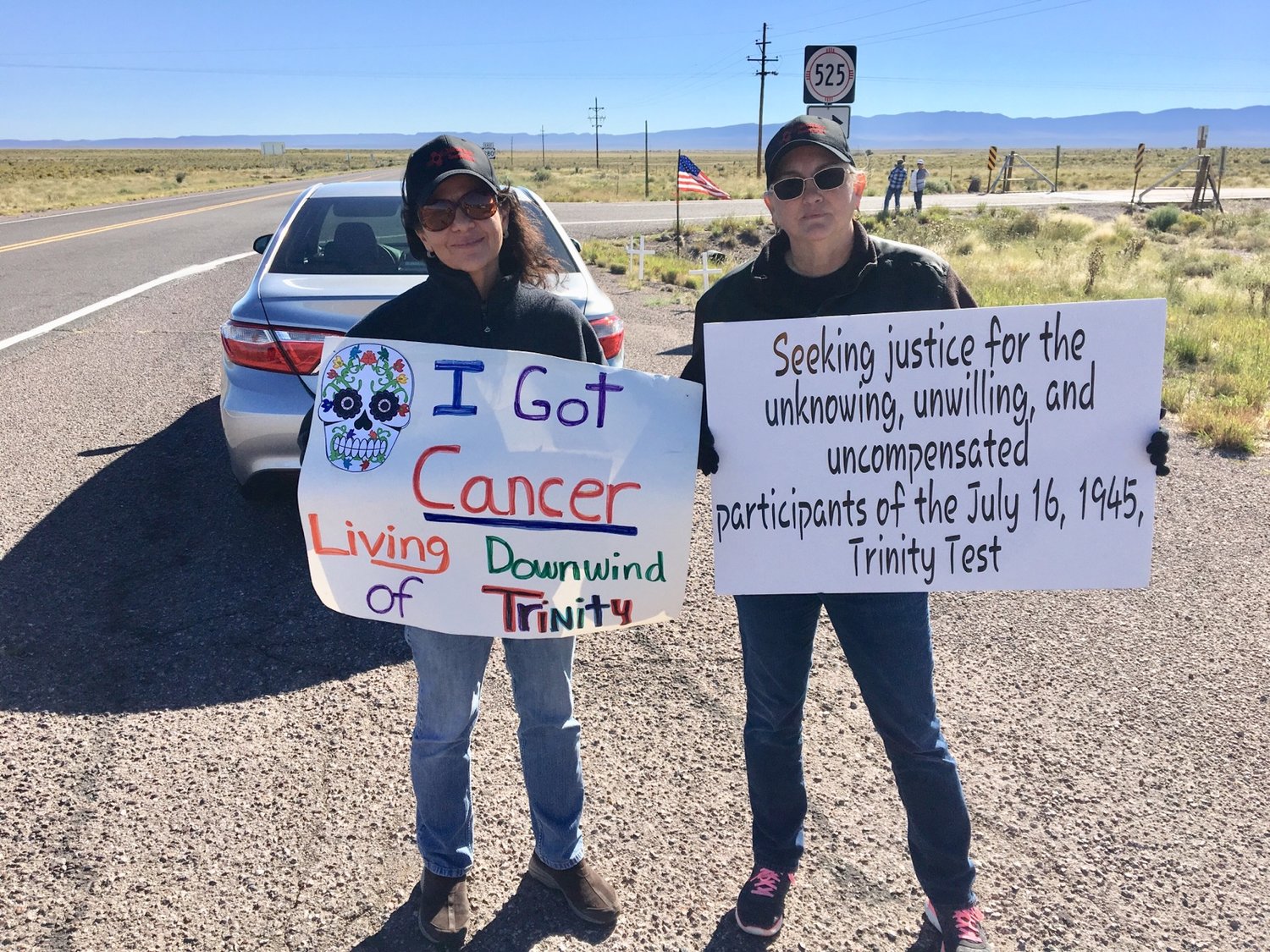 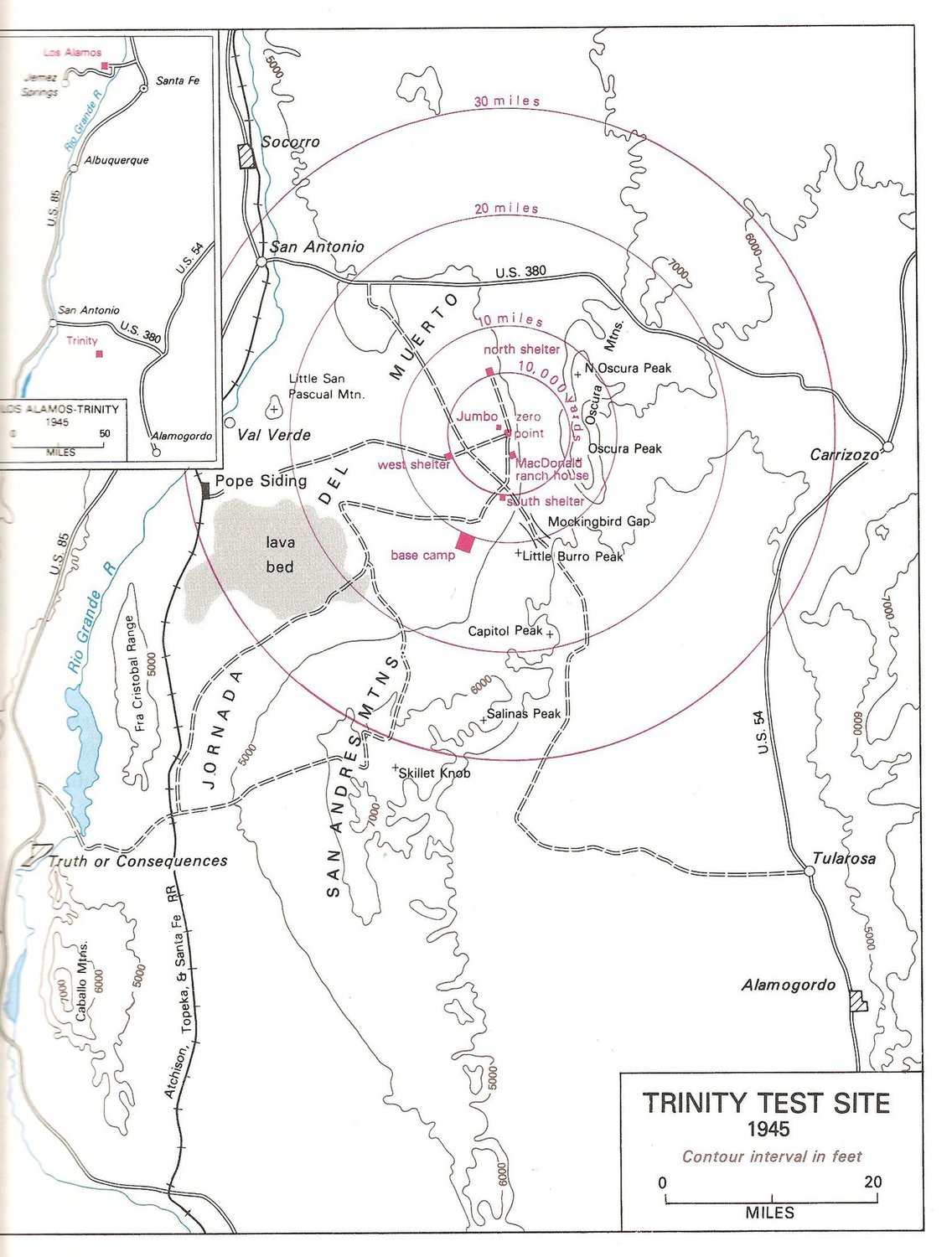 Previous Next
Posted Thursday, July 2, 2020 4:09 pm
Eyewitness to the blooming of the Atomic Age

“I was staring straight ahead with my open left eye covered by a welder’s glass and my right eye remaining open and uncovered. Suddenly, my right eye was blinded by a light which appeared instantaneously all about without any buildup of intensity. My left eye could see the ball of fire start up like a tremendous bubble or nob-like mushroom. I dropped the glass from my left eye almost immediately and watched the light climb upward. The light intensity fell rapidly hence did not blind my left eye but it was still amazingly bright. It turned yellow, then red, and then beautiful purple. At first it had a translucent character but shortly turned to a tinted or colored white smoke appearance. The ball of fire seemed to rise in something of toadstool effect. Later the column proceeded as a cylinder of white smoke; it seemed to move ponderously. A hole was punched through the clouds but two fog rings appeared well above the white smoke column.

“There was a spontaneous cheer from the observers. Dr. von Neumann said, ‘That was at least 5,000 tons and probably a lot more.’ My estimate of the width of the ball of fire was guessed to be 1 to 2 miles at that time. Someone said keep your mouth open and just then, about 1-1/2 to 2 minutes after the light flash, a sharp loud crack swept over us – it reverberated through the mountain like thunder. Several small flashes took place some distance from and after the big flash, apparently part of a measuring system. Commander Bradbury said that the cloud was up over 20,000 feet and still rising. The top of the cloud was moving slightly northeast and was being sheared off.”

Fay Lisk was 12 years old and fast asleep at 5:30 a.m., July 16, 1945, when her mother was outside doing something and saw a big flash in the sky. Their family lived on a ranch some 45 miles north of the place the Atomic Age began, now known as the Trinity Test Site.

Fay said her mother-in-law lived in Mountainair, 75 miles as the crow flies, from Trinity Site, and she saw the windows shake like a big earthquake had hit her house. It wasn’t until the United States dropped the bomb on Japan, August 6 and 9, 1945, that the people of the Tularosa Basin, Jornada del Muerto and surroundings knew what happened in their area of the world. Headlines screamed the U.S. had destroyed two cities, Hiroshima and Nagasaki, and the successful test in southern New Mexico was a back-page story.

“It was after they bombed Japan that we found out that they set the test bomb off,” said Fay, who was born in 1932 and now makes her home in Globe, Arizona. “Everything was such a secret, we knew there was a town of Los Alamos, but all the contact we actually had was a radio, and we would get a little news that way.”

At Bingham, 20 miles north of Trinity Site, was the schoolhouse where Lisk went to school growing up. She stayed with Ted and Sylvia Myers during the school week. Ted and Christian Myers drove the two school buses that served the school. Fay graduated from 8th grade in May 1945.

“At the time, Bingham was on the old dirt road that went across there,” she said. “There was a little post office and a little store and some little cabins. There was one teacher and that year I think we had 12-13 kids who went to school there. I was the only one in 8th grade. I loved school.”

Living next to the Myers was a younger couple, the husband’s name was Henry, Fay remembers. They would visit to play cards.

“He [Henry] had a short scruffy black beard ­– all of a sudden he had these big blotches all over it,” Fay said. “They were gray like if you had thrown bleach on somebody. And [another family] had ducks that hatched out deformed. There was just a lot of this that people started talking about. Cows and cats with blotches. They [the government] never did say or do anything about it.”

Fay went on to say the people who ran the Bingham store, Harald and Sally Dean died, she thinks, with lung cancers. The Myers moved to Farmington and suffered early deaths, although she didn’t know why. Fay’s mother died in 1970 from lung cancer.

As an adult visiting the United Nations building in New York Fay saw a display about the things that happened in Japan. She said it was truly terrible but the bombs ended the war and feels many more people would have died had the atomic bombs not been dropped.

“I think that if it hadn’t had been for that, we would have lost a lot more Americans,” she said. “And it ended the war. It ended – poof – right then.”

Many more oral histories contain stories of cows, cats and other creatures with gray blotches. There was a black cat turned blotchy in Tularosa, reportedly sold to a tourist for $5. Effects were reported to be seen and felt across the region, including in Los Alamos, Hillsboro, Fort Bayard, El Paso and the Sacramento Mountains.

Memories of those even closer provide amazing descriptions of the event itself. The scientists and personnel watching through eye protection as the first atomic bomb in the world lit up the New Mexico sky.

“The effects could well be called unprecedented, magnificent, beautiful, stupendous and terrifying. No man-made phenomenon of such tremendous power had ever occurred before. The lightning effects beggared description. The whole country was lighted by a searing light with the intensity many times that of the midday sun.” – Brig. Gen. Thomas Farrell

Trinity Site today is a national historic landmark, declared so in 1975. The 51,500-acre area includes base camp, where the scientists and support group lived; Ground Zero, where the bomb was placed for the explosion; and the Schmidt/McDonald ranch house, where the plutonium core to the bomb was assembled.

Two Tularosans, Tina Cordova and Fred Tyler, watched family and friends dying in what seemed abnormally high numbers of cancer incidents. They, with the help of many area residents, organized the Tularosa Basin Downwinders Consortium in 2005. Cordova is the fourth generation of her family to have cancer since 1945.

“The test was the only time the government tested a bomb 100 feet above the ground,” Cordova said. “The reason they never did it again is because of the fallout. They believe it went seven miles past the atmosphere. It created more light than the sun, gathered up an enormous amount of plant, sand, material and took it into the air. Ash fell for days.

“They never evacuated anybody or warned anybody. From the census there were tens of thousands of people that lived within 50 miles, and some ranchers within 12 miles. When the ash fell it settled on everything.”

Painting a picture of life in 1945, Cordova said there was no running water. People relied on cisterns for their water, used the ditch water for bathing and laundry. There were no grocery stores, only mercantiles selling basic goods like sugar, flour, rice, coffee, cereal – nothing refrigerated. Everything else consumed was grown or hunted.

“People went back to their lives not understanding what all this meant,” she said. “They damaged us. People have been dying of cancers. We were the first people ever exposed to radiation in the world.”

Resulting damages have devastated the people of rural New Mexico generationally, she said. Families affected by cancer exhaust financial resources with medical and death issues, which prevents them from being able to pass along accumulated resources to their children.

“This is a social justice issue,” she said. “We were unknowing, unwilling and uncompensated.”

Usually in July the Tularosa Basin Downwinders hold a candlelight vigil in Tularosa and often one in Socorro, to commemorate those who died of cancer but won’t this year because of coronavirus restrictions.

Cordova said there is an event planned in Albuquerque around 5 a.m. on July 16 commemorating the 75th anniversary of the explosion but had no details available at press time. For more information on the Tularosa Basin Downwinders Consortium visit trinitydownwinders.com.

White Sands Missile Range also has a commemoration event planned, but due to the need to limit attendance, it will not be open to the public, according to Drew Hamilton with WSMR Public Affairs. It may be available online after the event. For more information about the Trinity Site and history of the event visit wsmr.army.mil/Trinity/Pages/Home.aspx.

In Silver City, the Gila Friends hold a yearly Hiroshima Peace Day Observance at Gough Park which this year will be at noon on Sunday, Aug. 9, if the city has opened the park. For more information about the observance call Tom Vaughn at 575-590-1588.

Healthy Habits for Your Home

5 Heart Health Tips for the Holidays

Spasticity 101: A debilitating yet treatable common condition after a stroke