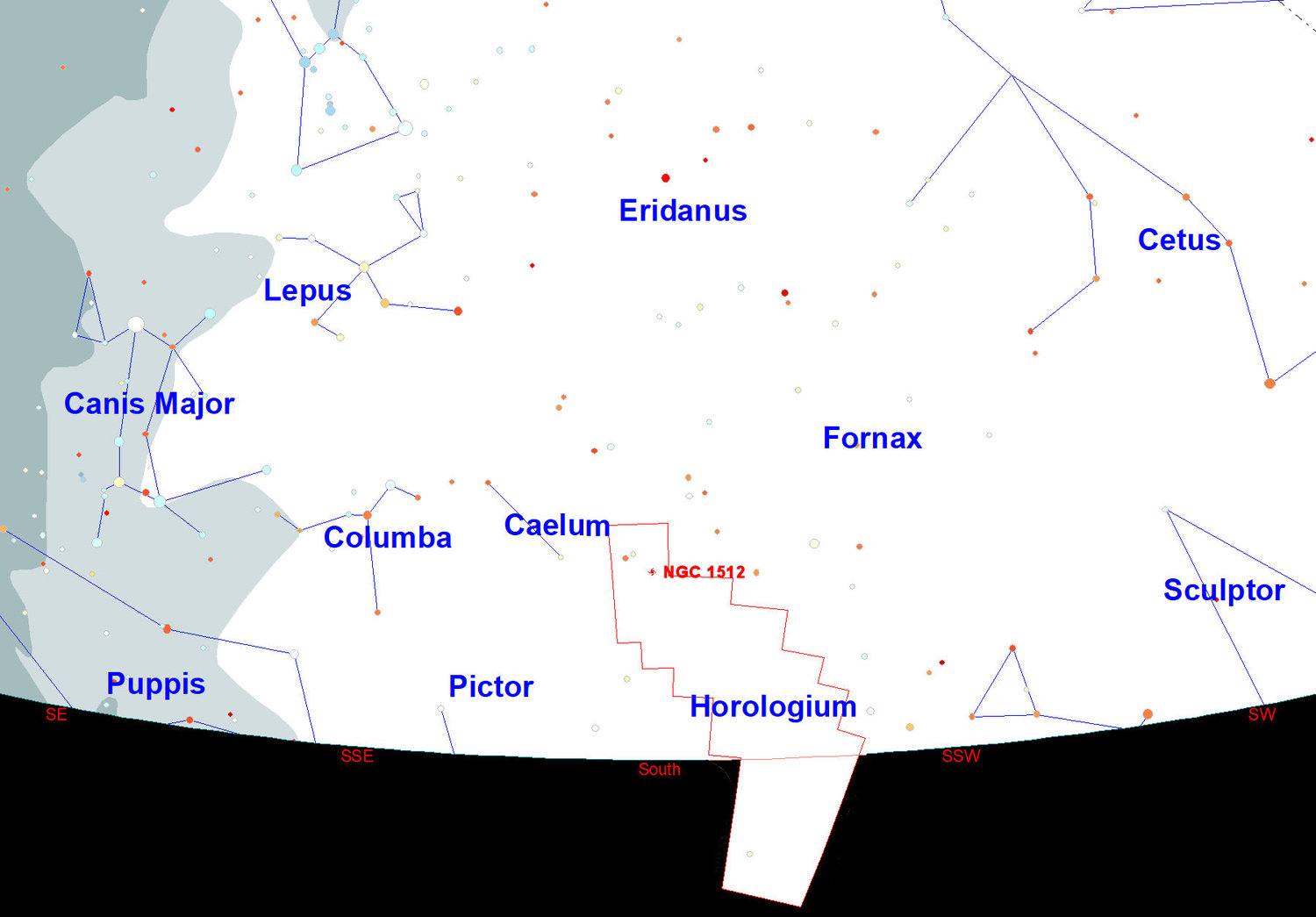 Horologium is a modern constellation representing the pendulum clock. The southernmost quarter of this constellation never rises above the horizon so it is not visible from the desert southwest. There are a number of galaxies here, including the double-ringed, barred spiral galaxy NGC 1512.
Posted Monday, February 1, 2021 9:36 am
Calendar of Events – February 2021 (MST)

As a modern constellation, there is no ancient Greek mythology around it. Pendulum clocks were invented in 1656 by Christiaan Huygens. These clocks could keep time to within fifteen seconds a day, making them the most precise timepieces available at the time. Unfortunately, they must remain stationary or the pendulum will not maintain its accurate swing. This limitation made these clocks useless for maritime usage where accurate time was needed to determine the ship’s location with star sightings.

A hundred years later, French astronomer Nicolas Louis de Lacaille travelled to South Africa and spent two years cataloging almost 10,000 stars in the southern sky, stars that were not visible from France. Out of these stars he created 14 constellations that mostly represented scientific instruments. One of these was l'Horloge à pendule & à secondes (Clock with pendulum and seconds hand) announced in 1756, commemorating the pendulum clock’s invention. Six years later the name was Latinized to Horologium.

The 11 stars that Lacaille cataloged in this constellation are all fainter than fourth magnitude except the brightest star, Alpha Horologii. At magnitude +3.9, this star is spectral class K2, indicating an orange hued surface. An aged star, Alpha is 11 times the diameter of our Sun and 1.55 times its mass. It has evolved off the main sequence where it was burning hydrogen in its core and it is now burning hydrogen in a sphere around the inert, but very hot, core. This caused the star to expand, allowing the surface to cool to the orange color. This star does not have a formal name.

In the northern end of Horologium is the barred spiral galaxy NGC 1512. This galaxy is thirty million light-years away from us, with a face-on orientation that allows us to easily see its internal structure. NGC 1512 is magnitude +11.1, too faint to be seen with the naked eye, but visible with a medium-sized telescope. The New General Catalog (NGC) which contained the entry for this object was first released in 1888.

Like most galaxies, the nucleus of this galaxy most likely has a black hole at its center. Surrounding the nucleus is a ring of young blue star clusters marking a region where stars are being born at a rapid rate. Blue stars are the most massive stars and they burn through their hydrogen fuel very quickly, so they must have been recently formed. This close-in star formation ring is called a nuclear ring, which in NGC 1512 is 2,400 light-years wide.

The bar in this barred spiral galaxy connects the nuclear ring to the confusingly named inner ring. Some galaxies have three rings, with an outer ring that NGC 1512 does not possess. The inner ring is also a region of rapid star formation with many blue star clusters visible. Dark bands of dust are being pulled out of the inner ring. They flow along the bar and curve inward, passing over the nuclear ring heading for the black hole in the nucleus.

This galaxy is not circular, but is stretched into an ellipse by the gravity of the nearby dwarf galaxy NGC 1510. The long axis of the ellipse points toward the dwarf galaxy. The bar in NGC 1512 is also aligned with this dwarf galaxy.

The dwarf galaxy’s gravity probably caused both rings to form, possibly when it passed through the larger galaxy. These two galaxies have been interacting for at least 400 million years. While the two galaxies are 45,000 light-years apart now, the dwarf galaxy will eventually pass through its neighbor a few more times before it is completely shredded and incorporated into NGC 1512, making this barred-spiral galaxy even larger and leaving it alone in space.

The Planets for February 2021.

Mars is the only planet left in our evening sky. Seventy-two degrees above the southwestern horizon as it gets dark, this planet shines at magnitude +0.7 as it slowly moves away from us. The increasing distance has shrunk the disc to 7.0 seconds-of-arc across. The God of War moves from central Aries to western Taurus this month. It sets around 12:30 a.m.

After last month’s appearance in the evening sky, Mercury appears on the east-southeastern horizon around mid-month, not far from Jupiter and Saturn. This speedy little planet passes four degrees north of Jupiter on February 15.  It never reaches Saturn, since it stops on Feb. 20 before turning around and beginning to head back toward the Sun. On that day the Messenger of the Gods’ disc is 9.2 seconds-of-arc across and it is a crescent that is 26 percent illuminated. It rises around 5:30 a.m. and it is almost eight degrees above the east-southeastern horizon as it gets light. This month Mercury travels from northeastern Capricornus into southwest Aquarius. It then drifts south back into Capricornus and then turns back eastward toward the Sun. Enjoy the dance between Mercury, Jupiter and Saturn and "keep watching the sky"!