Another RVing couple succumbs to the magic of Silver City 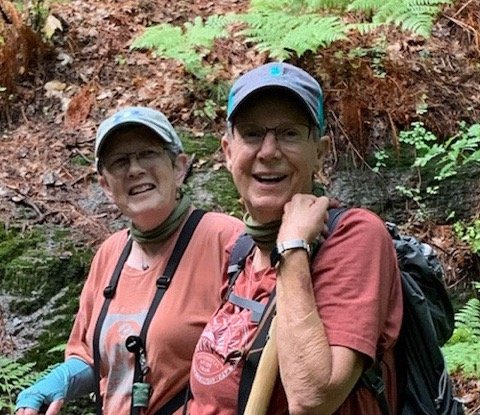 More than 339 species of birds have been spotted in Grant County. In the Gila River Habitat Management Unit (along the Gila River), at least 200 species have been documented. Common black hawks, yellow warblers, cardinals, vermillion flycatchers, towhees, thrashers, black phoebes, Gila woodpeckers and on and on. They like our variety of terrain – mountains and forests and lakes and rivers and streams and canyons and reservoirs and springs and desert. We even have a swamp. If you drive an hour or two, you’ll find even more species along the Rio Grande and around its lakes.

Grant County has hiking trails – oh, my goodness, do we have hiking trails! Around 3.3 million acres where you can hike for years and always find something new. Where the trails come in all levels of difficulty, so if you are a meandering type of hiker (like me) or a charge-ahead-no-matter-what super hiker (like my friends who don’t want me along), you’ll find trails that suit your capability.

When I asked Rose Valley RV Ranch’s most recent permanent resident couple, Pat Bowen and Julia Osgood, why they chose Silver City, they immediately claimed our birding and hiking as the main attractions – and old people dancing.

“We went to a festival downtown and figured it would be all young people and families,” Julia told me, “and then we saw lots of people our age group dancing, and we knew we liked it here.”

Both Pat and Julia are originally from Texas, although they both have lived in other states. Julia, who has a degree in environmental science, had a career in technical writing and lived in the Boston area during the 1990s and the early 2000s. Pat, who retired from administration at University of Texas-Austin’s College of Education, spent a few years in Ruidoso as an accountant at the Ruidoso Jockey Club. She also taught English and American history at a university in Kunming, China during the Tiananmen Square riots. She was one of about 30 foreign instructors who stayed during the riots and, at the request of the university, appeared on a Chinese television show where she sang a song in Chinese. She doesn’t speak fluent Chinese and “when I heard the audience laughing, I knew my pronunciation must be terrible,” she said.

Both moved back to Texas and got involved in environmental organizations and both are Texas Master Naturalists, with the goal of training volunteers to protect Texas’ natural resources. Julia is currently a board member of the organization. And both have been avid birders for years. In fact. they met in 2010 on a birding expedition. They married in 2016, soon after the Supreme Court’s marriage equality decision in 2015. After retiring, they moved down to the Rio Grande Valley and stayed active in both environmental and birding groups. They also volunteered during the summer as camp hosts at the campground at Davis Mountain State Park.

Pat has been RVing since she was 13 years old. She owned a Casita travel trailer at the time she and Julia met. Since then, they have owned several RVs and have traveled throughout the Southwest while keeping their home in Texas. They first visited Silver City in 2018, spending a week here at Rose Valley. They came back the following summer and stayed for a month. Then, during their visit here this past summer, Julia said to Pat, “I have a crazy idea – why don’t we stay here all the time?”

They sold their house in Texas, bought a larger RV (a Forest River Sabre Fifth Wheel), and a month ago moved here fulltime.

Even though many of Silver City’s regular activities are on hold right now, Pat and Julia are excited about eventually taking advantage of the area’s resources. While hiking and birding are at the top of their list, they are looking forward to meeting more people and getting involved. Back in Texas, they ran a trivia team and are looking forward to Little Toad Creek Brewery’s trivia nights. They are already involved with the Audubon Society, and are especially interested in projects that center around water birds and water quality, which has a big impact on the bird population. They are also members of the Native Plant Society. And in whatever spare time she can find, Julia keeps up a cooking blog called cookneasy.com. (I can personally endorse her culinary skills based on the homemade-by-Julia cranberry scone I just enjoyed.)

“We’ve already made good friends here at Rose Valley,” Pat said, “and there’s just so much to do here. Something for everyone.”

Future plans for the couple include buying a small Casita-type travel trailer so they can “go real camping where we can have a campfire,” they told me, referring to Rose Valley’s campfire restriction, after which they had to sit through my monologue on the reasons for the rule. They’ll also continue traveling with the RVing Women, an RV club for and by women. International traveling, specifically to Costa Rica for the birding, is also on their list for the future.

“Now that we’ve settled in, we want to sleep late, hike, bird, take advantage of what the town offers and explore,” Julia said, who then explained that sleeping late for them was getting up at 6:30 a.m. Not my thing, but I admire their enthusiasm and commend them for wanting to take advantage of all the area has to offer. At the same time, we here at Rose Valley and in the broader community of Silver City will benefit from their skills, perspectives, and desire for new friendships and new experiences. Welcome to Silver City, Pat and Julia, we’re glad you decided to stay.