From Silver City to Scotland 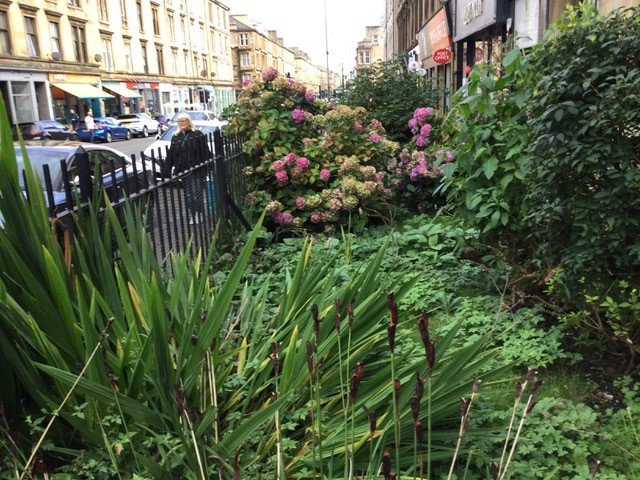 Bright gardens in Glasgow surround the square including this one with some happily growing hydrangeas.
Photo by Vivian Savitt 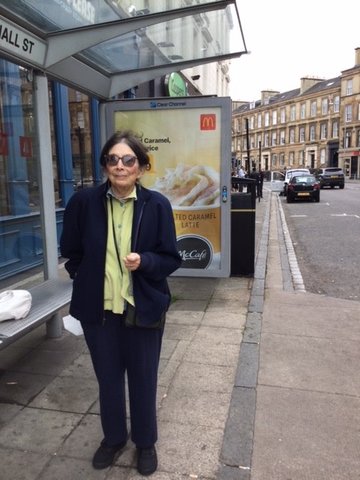 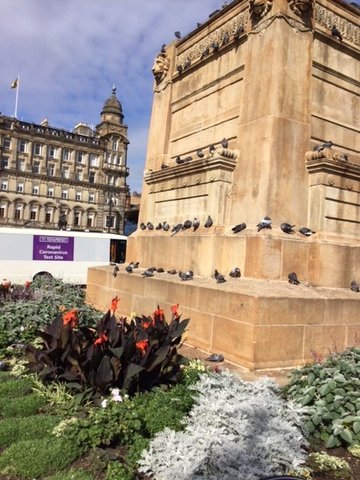 George Square in Glasgow, Scotland is one of the great public squares of the world.
Photo by Vivian Savitt
Previous Next
Posted Tuesday, September 28, 2021 4:04 pm
By Vivian Savitt

Editors Note: Silver City writer Vivian Savitt has been part of the Desert Exposure team for many years. She has had regular pieces appearing in the paper including the Southwest Gardner and then Maneuvering Elderdom columns. Now Savitt has hit the European road and is sharing her view as a New Mexican abroad.

Great public squares detonate energy. That’s exactly how to describe George Square in Glasgow – Scotland’s largest city and my resting place for an undesignated period as I meander around the country. Even on an off-day George Square can rock, serving as the go-to place for voicing controversial topics. Foremost among those right now is whether there will be a second vote for Scottish independence – and the global climate emergency. (The United Nations conference addressing climate change, COP 26, will be hosted in Glasgow in early November.)

I arrive at George Square on a Saturday, when the downtown area is overflowing with folks, mainly shoppers – the jammed walkways offering a block party atmosphere for Covid droplets.

Glaswegians, however, appear to be serious mask wearers and heed a poster that I read on the bus: “Masks are not a Choice. They are the Law.”

Inside the expansive square, the picture is not as threatening: I have a wooden bench to myself – an audience of one – to view an array of fabulous architecture, statuary and an international people panorama. I find sitting here to be super, passive recreation and a fine way to spend time. It is hard to visualize that this square was once a cow pasture.

Tourists speaking languages I can only guess at, roll suitcases through the square’s vast inner space. There is a certain rhythm to the passerby’s meanderings, and only a few stop to frame a photo on their I-phones. Many wait for a pigeon to alight on the head of the tallest monument – an 80-foot high Doric column commemorating Sir Walter Scott – at the square’s center.

In the midst of all the human action, a wildlife element also exists. Leashed dogs – there are lots of bulldogs in this city and I’ve yet to see a single black Scottish terrier – come and go as do those ubiquitous pigeons. Due to the proximity of salt water, several species of gulls are often spotted mingling with the pigeons. None seem fidgety.

Gull biologists report the birds are attracted to easily accessible, abounding amounts of fast-food litter and leftovers. So, they are leaving their seaside habitat to engage in urban feasting.

At the square’s perimeter and outer edges carry-outs, restaurants and coffee shops flourish, all attracting residents and tourists to interact, dine al fresco and stretch their legs. Remains from their dining intervals are quickly picked over by the avian browsers. Admittedly

though, I find it exciting to sip coffee while overhead, a gull calls trenchantly as if seashore is in sight. I makes me feel like a seafarer out of “Moby Dick.”

As I continue to observe the scene on the square, noise from an overhead helicopter causes the birds to abandon feeding in one great curved swoosh skyward – then head for safe haven at the base of the statues. There, at the feet of great Scottish historical figures – from Sir Walter Scott to Robert Burns and the engineer James Watt – the birds feel protected.

Interestingly, I note the gazes on the statues look outward and away from the square. This includes two fine equestrian statues of Queen Victoria and her Albert. I wonder whether contemporary social norms are too overwhelming for them to face. Perhaps the queen and her prince also ponder the recent fate of so many equestrian statues throughout the U.S.

As for myself, I won’t remain stationary like the statues, but plan to look inward and outward as I process what I see on my Scottish journey. Overall, I hope to report — not as a tourist — but in a way the Scots would deem as “a canny lass.”