From Booze, Bibles to Art Gallery

Gallery in frontier town has gone through changes 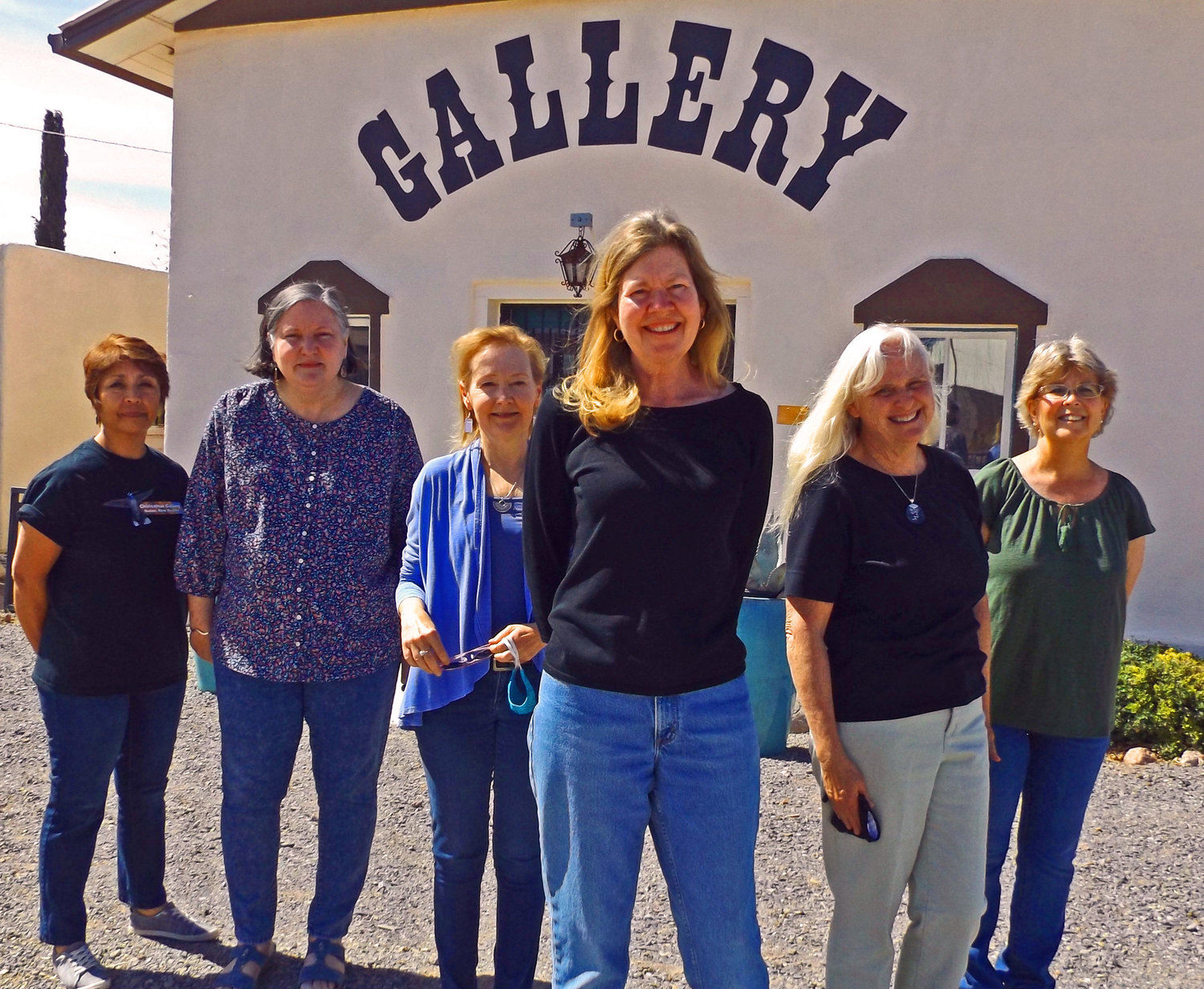 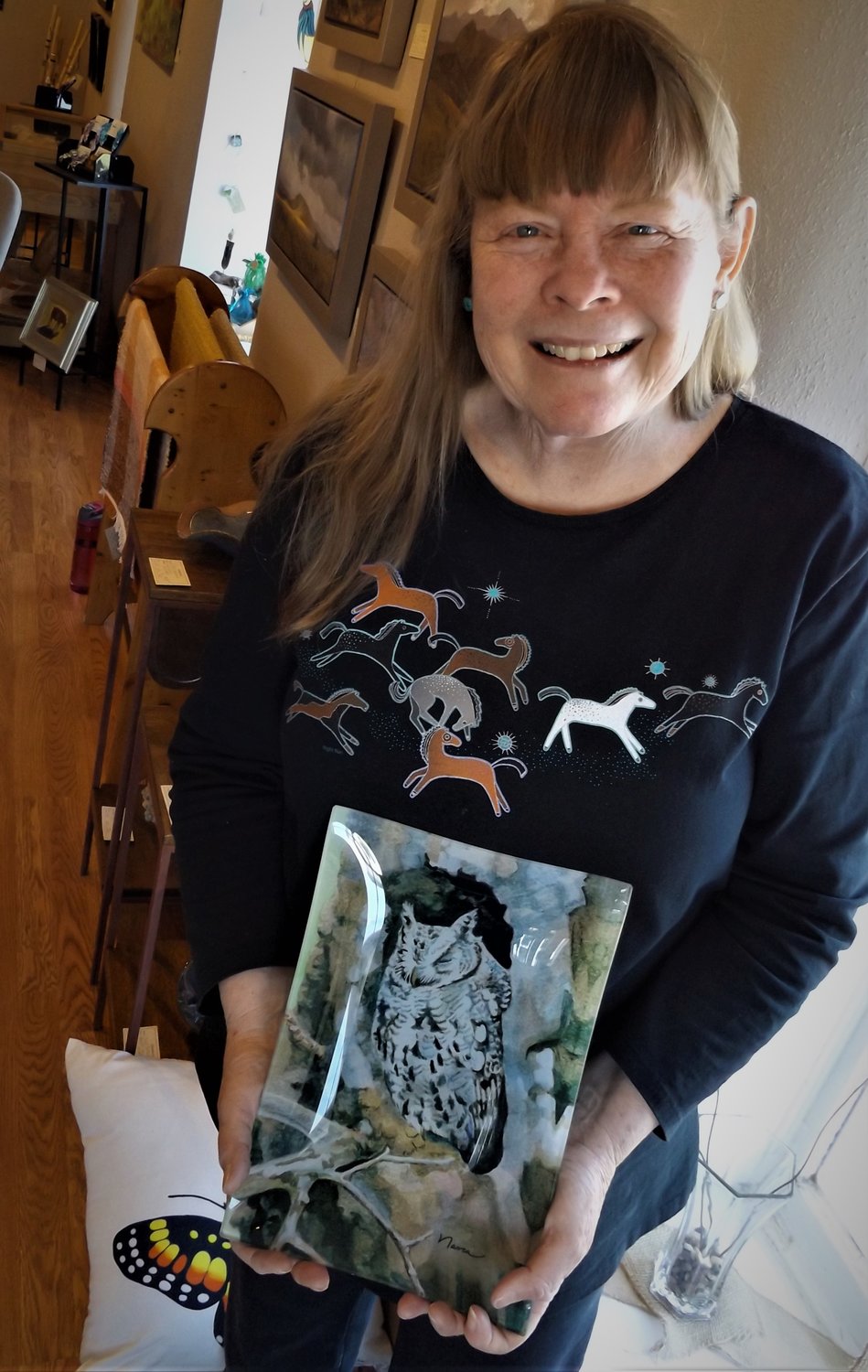 Narca Moore-Craig’s art is anchored in nature and in intimate wildlife portraits using a variety of media to reflect “the dignity” of various species. The artist has guided birding and field studies, and natural history tours across six continents. Her distinctive acrylic and watercolor paintings, and pen and ink renderings are featured in apparel, on umbrellas, glassware, even pillows. Her portrait of the Whiskered Screech Owl (Megascoops trichopsis) on glassware. 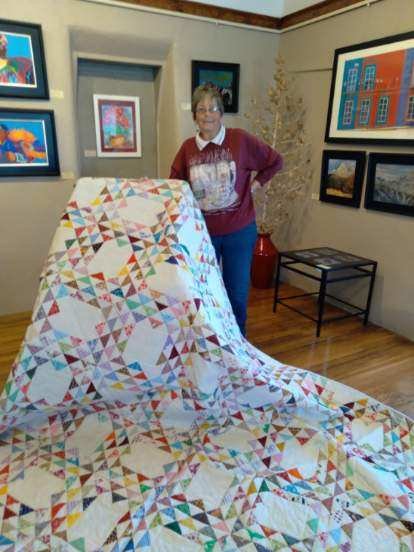 The Art Gallery will feature the beautifully detailed, hand-quilted work of artisan Trudy Kimble: Her queen-plus-size quilt is the centerpiece for the annual raffle-ticket fundraiser to support education scholarships and will be on display now through a Nov. 20th Holiday Show.
Previous Next
Posted Thursday, April 29, 2021 2:24 pm
By Dawn Aerts

When Rodeo, New Mexico, was born in April 1907, it began as nothing more than a cedar-post stockyard, a shipping point for livestock waiting to be loaded up and transported on the new Southwestern train line that stopped there between Bisbee, Arizona, and El Paso.

There were ambitious plans for the new frontier town:  a homestead of 160 acres, platted into 24 blocks and over 600 lots -- that never came to be.  While it began with cattle operations, across the road, a two-story adobe stood on the corner of State Highway 80 and Pine Street as the recorded site of a cowboy saloon and even a discreet brothel.

In the circular, “The Chiricahua Gallery, from Saloon to Church to Art” written by Kitty Deiss (published 1999), today’s Art Gallery is steeped in saloon lore among a handful of dusty hotels, boarding houses, cafes and business ventures that flourished into the early 1920s.

Narca Moore-Craig, a naturalist, artist and past board member with the Art Gallery, enjoys sharing the frontier story with visitors when they ask her about the old-stucco building.  “As New Mexico became a state, saloons became very profitable, and prohibition laws in Arizona brought plenty of people to Rodeo,” said Moore-Craig of that era.

Unfortunately, when New Mexico’s prohibition laws were enacted in 1919 and the rail-stop ended, population dropped from a recorded 300 in 1920 to 200 residents by 1929.  In those years, the once-lively saloon on Pine Street was converted into a general store, and in 1936 became the property of the First Christian Church of Rodeo.

It became a place of Sunday school and prayer meetings.

Deiss notes that early church members likely removed the upper portion of the first structure and replaced it with a steep gable end-roof, mounted by a belfry with a long-gone original wooden cross.  Over the years, the roofing was replaced with metal, and a decayed floor was replaced in the late 1930s, with other enhancements to come.

According to Moore-Craig, the Chiricahua Guild and Gallery was formed as a non-profit organization by artists and craftspeople from Arizona and New Mexico featuring a Spring and Fall Art Show each year.  Board members, volunteers and supporters help maintain and improve upon the existing structure as it stands the “test of time.”

It became a place of prayer and thanksgiving.

By 1967, the building was conveyed to St. Stephens Episcopal Church in Douglas, Arizona, serving as the “Mission Church” of St. Simon up until 1987.  But with discontinued use, the title or quit claim deed eventually reverted back to the First Christian Church trustees. Before that, the gallery served as a place for social meetings, Sunday school classes and as lodging for visiting preachers.

In 1988, the Rodeo Historical and Cultural Society (RHCS) was formed to adopt “old” Rodeo structures with historical significance and fulfill their mission to restore, renovate and “save” them.  Their early goal was to repair the dated structure and to re-purpose the building for library space or other community use.

It became the vision for a community art center.

“The Society and founding members of the Chiricahua (Arts) Guild considered and signed a long-term lease in August 1988 at one-dollar-a-year,” said Moore-Craig of the Guild’s agreement to repair and restore the building for permanent use as a community arts and crafts gallery.

“The first Holiday Show (held in 1988) was a celebration of that decision,” said Moore-Craig of a traditional Fall Show and Spring Show held in April. “There is a special energy in this place as we get past the winter months. The birding season begins in earnest. We have visitors come from all over the world, so the gallery became a continually changing showcase for local talent.”

“There’s so much talent in this area we wouldn’t realize without this gallery.”

As a field-biologist Moore-Craig’s art is anchored in intimate wildlife portraits using a variety of media to capture “the dignity” of each species.  Her inspiration comes from past work as a field-biologist and as an observer of the Chiricahua life scape.

“I’ve been part of research studies, watching the comings-and-goings of hummingbirds and of marauding javelinas,” Moore-Craig said. “And artists have found ways to put their art into many different forms, on practical things that people can use.”