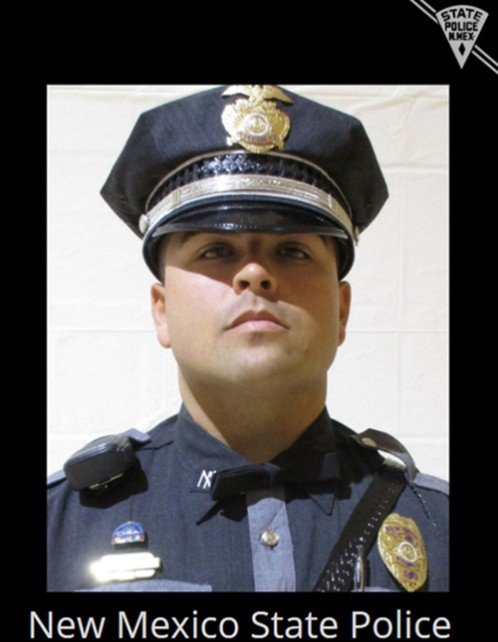 The evening of Friday, Feb. 5, I drove west on Interstate 10 from El Paso to Las Cruces.

An hour after dark, heading east on I-10, was a long line of police vehicles flashing lights.

The lowered flags, the bright lights, the giant message at the East Mesa Public Safety Complex reading “NMSP – 1251” were just some of the tributes to Officer Darian Jarrott, who wore New Mexico State Police badge No. 1251.

By now, we all know the murderous fate Jarrott suffered Thursday, Feb. 4.

We’re also learning of the outpouring of support and concern expressed for Jarrott, a native son of Lordsburg, and his surviving family, which includes three small children and a baby on the way.

Residents of Lordsburg have been displaying blue lights. Money is being raised all over the state, mostly by people who never knew Officer Jarrott.

As of this writing, we don’t yet know if Officer Jarrott stopped his killer on a routine traffic stop, or if he was called into pursuit.

Regardless, in my view, for a law enforcement officer, there is no such thing as a routine traffic stop. Whether you are a hardened criminal or a by-the-book law abiding citizen, no one is happy to see those red-and-blue lights in the rear-view mirror.

An officer must be prepared to handle all these extremes and everything in between.

In the past decade, we’ve seen a dozen or two videos of law enforcement officers acting improperly, wrongly and sometimes fatally. We’ve not, however, seen videos of the millions of encounters with law officers doing their jobs to the standards to which the vast majority of them strive.

In every profession, there are some who perform their jobs carelessly, incompetently or vindictively. No one, however, wants to eliminate doctors because a patient died during a botched surgery. No one protests to get rid of buses when a driver has a fatal accident.

Many New Mexicans are married to a law enforcement officer. Many are children or parents of officers. Many have friends or family members on the job. They know.

But many New Mexicans do not have that familiarity or understanding. Maybe, for them, Darian Jarrott can be the face of law enforcement. He was a real person, with real family, with real children, with the same social, financial and personal struggles we all have. Friends describe him as happy, upbeat and positive.

Here are the words of one of Jarrott’s colleagues, State Police Investigations Bureau Captain Randy Larcher, written the day after Jarrott’s death: “ … yesterday was one of the more difficult days of my 15-year career and I think everyone needs to know. It's not an easy era to be a police officer, and even more difficult when one of our officers is killed by an animal. Being involved in this investigation all day yesterday (and continuing today) made me reflect on the wonderful profession of law enforcement. We collectively were stabbed in the back (and front) nearly all of 2020 for the actions of a few. But at the end of the day, when everyone else is running away from danger, keep in mind, the brave men and women of law enforcement are running towards it. It's nice to sleep in our warm beds and Monday-morning-quarterback every action law enforcement takes, but at the end of the day, those men and women are risking their very lives. Remember Darian Jarrott for his selfless sacrifice. His children certainly will.”

Richard Coltharp is publisher of Desert Exposure. He can be reached at richard@lascrucesbulletin.com