Clay Artist Comes Back to her Roots 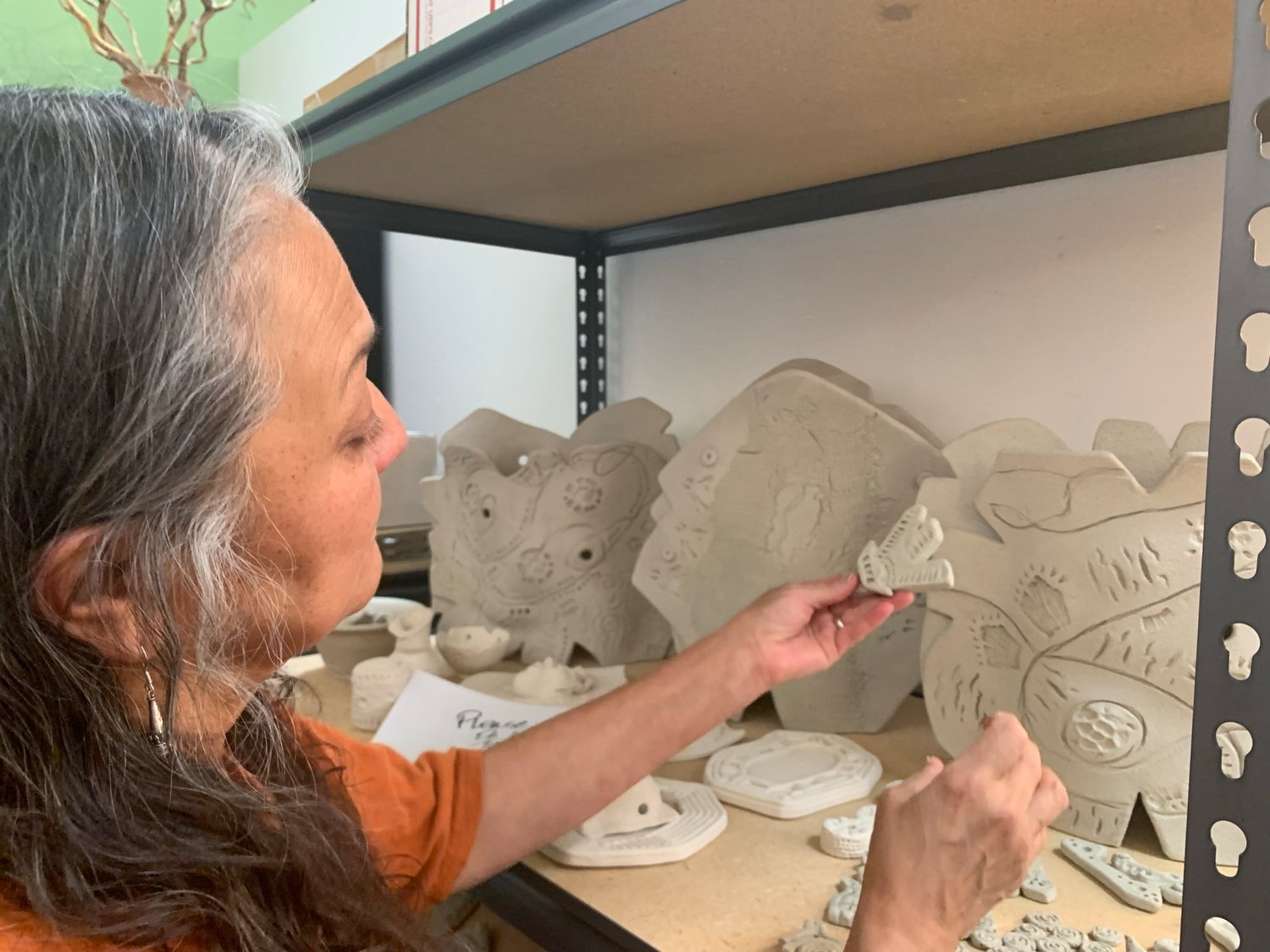 Clay artist Catherine Russo displays some of her work. Along the back wall are some of her current slab pieces.
Photo by Elva K. Österreich 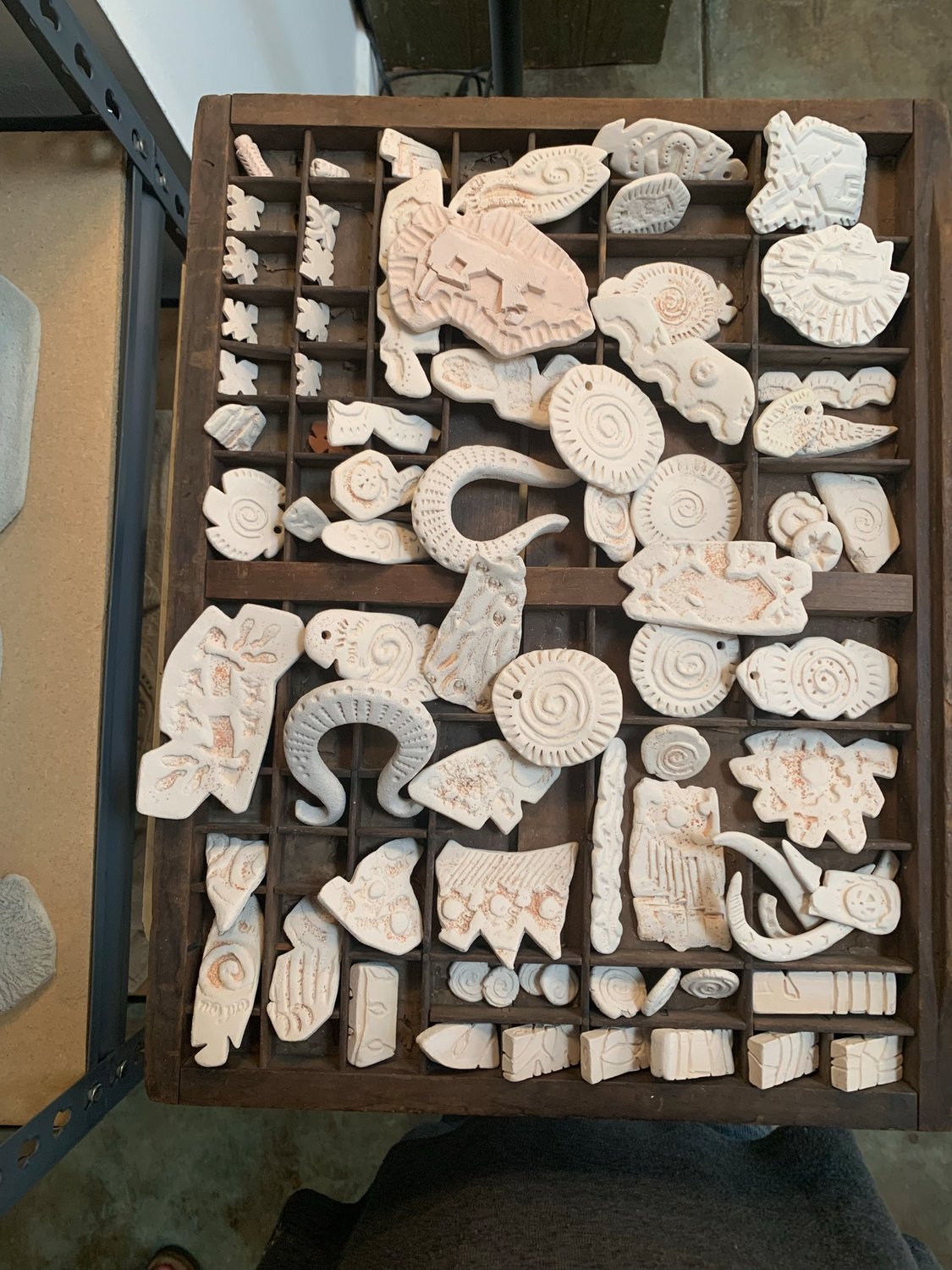 A selection of Zen gems which Russo will be showing workshop participants how to create.
Photo by Elva K. Österreich 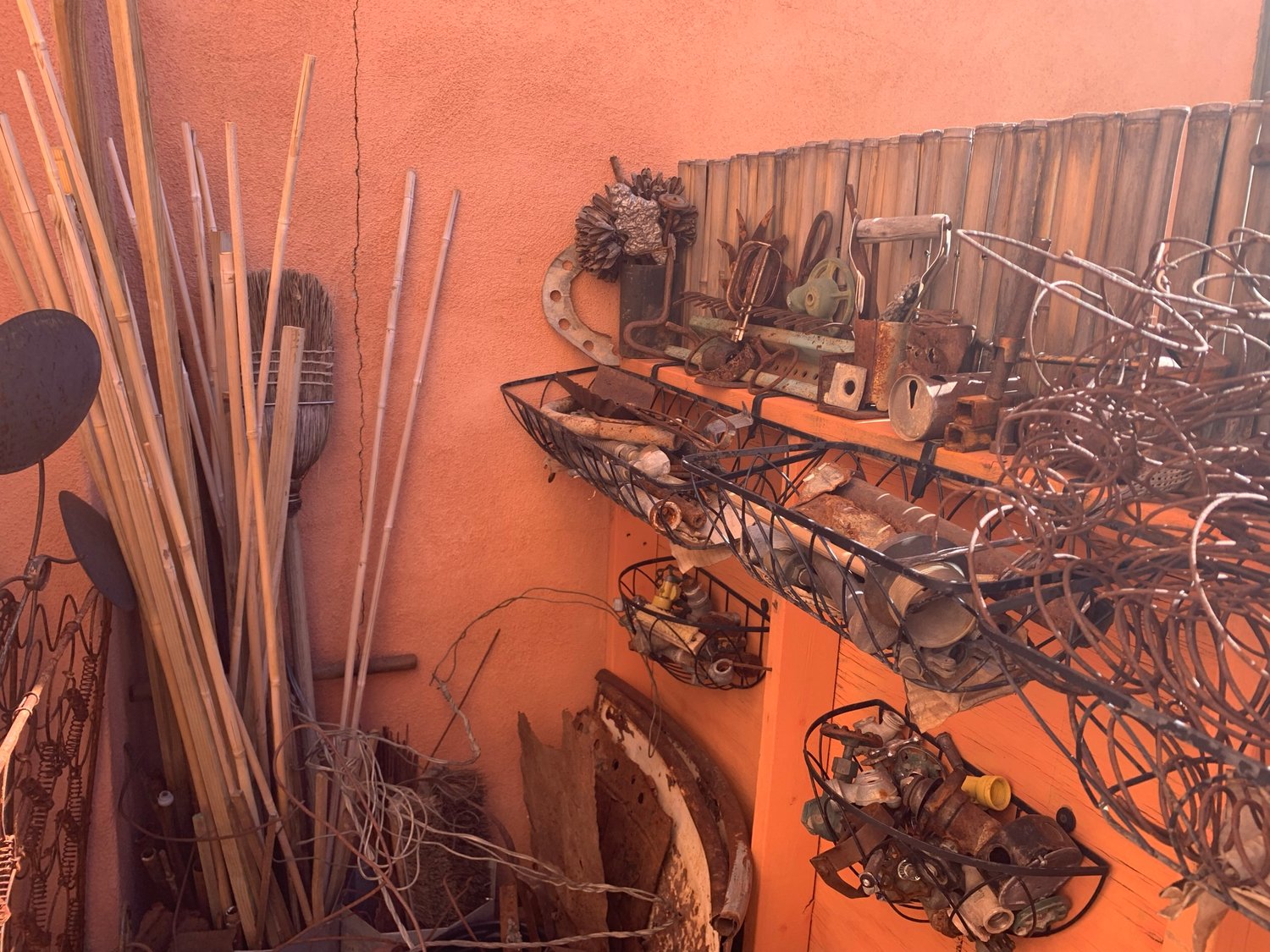 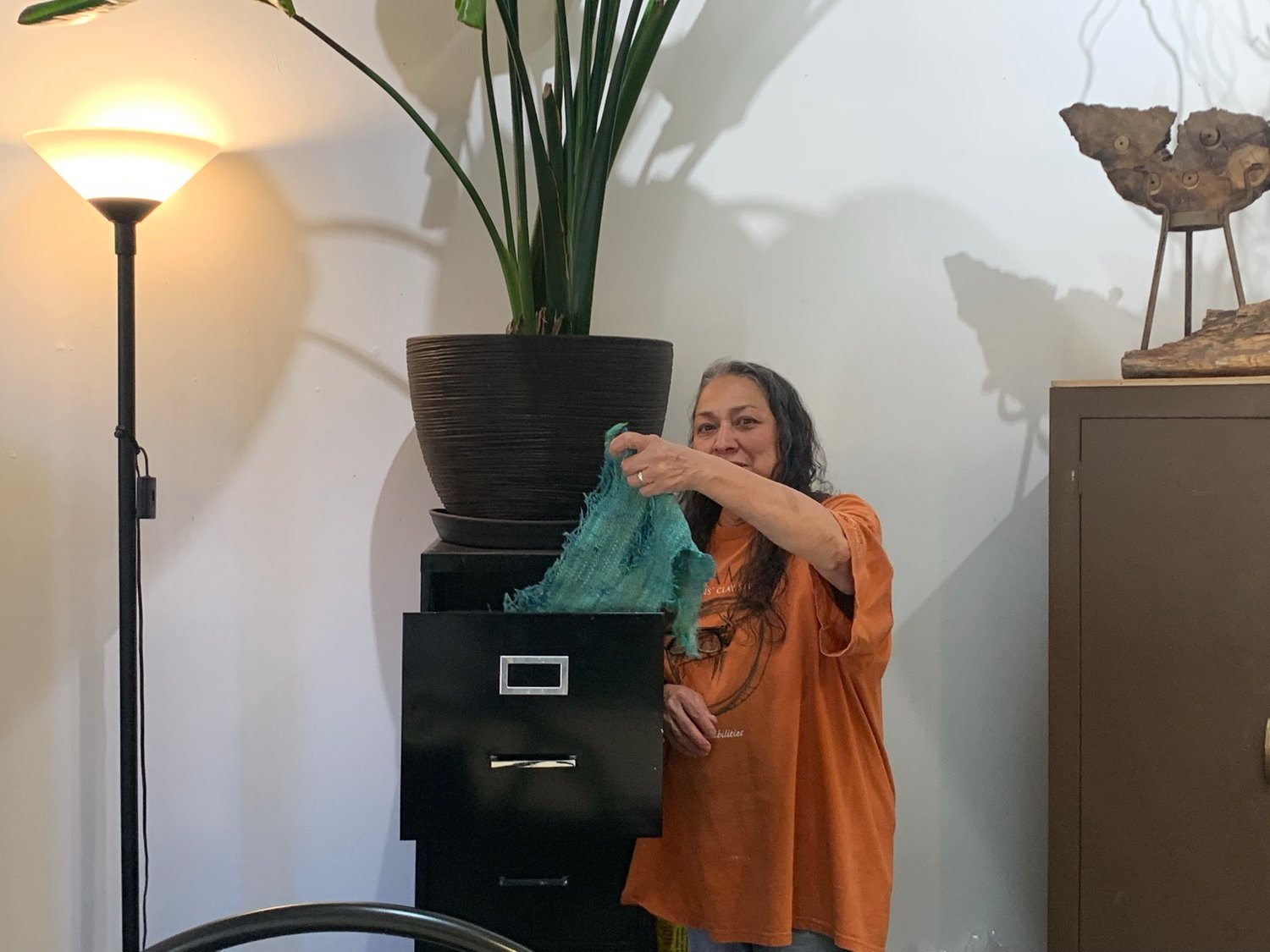 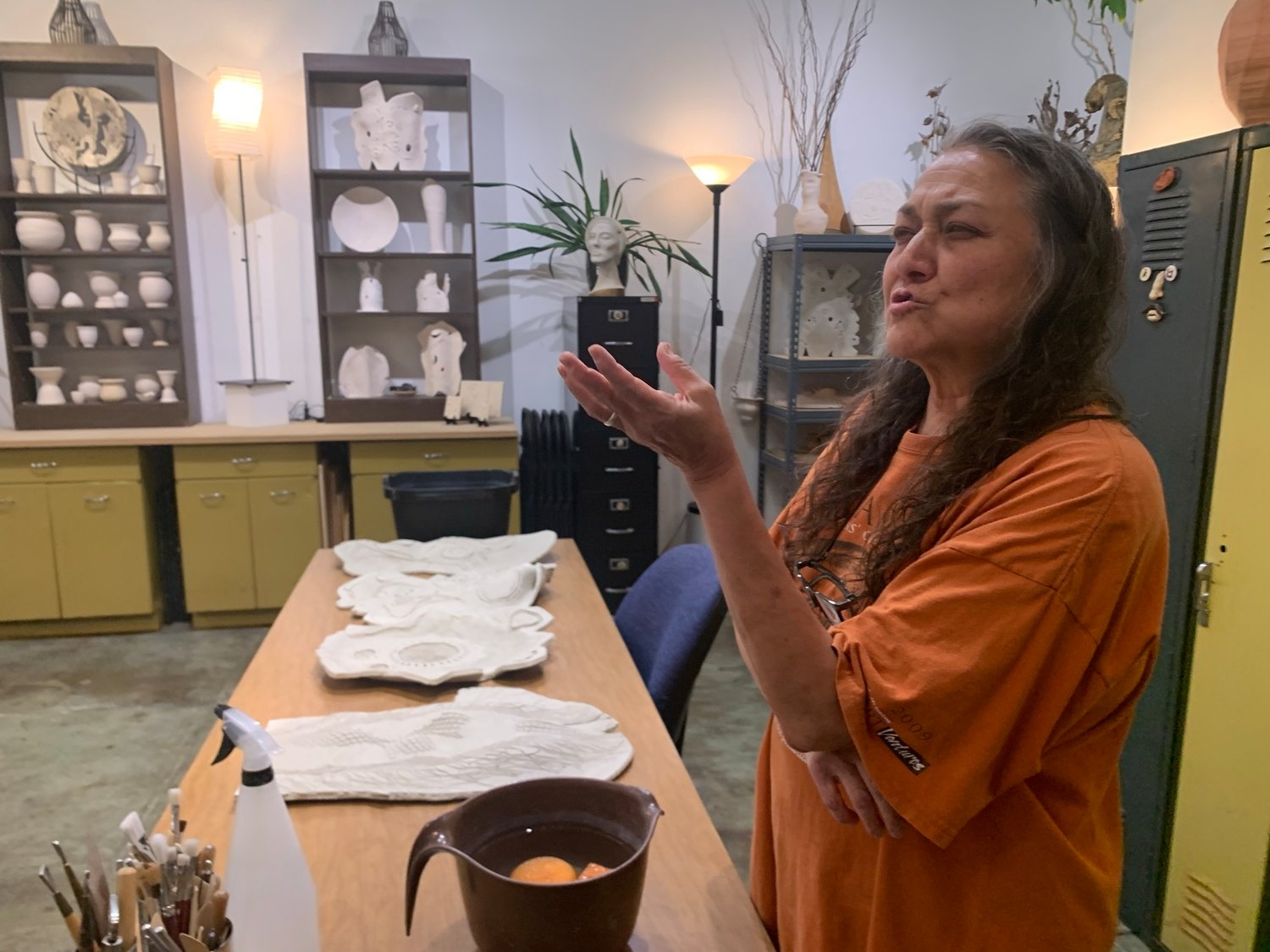 Russo talks about her passion for creating her clay sculpture as part of the connection between the past and the future.
Photo by Elva K. Österreich 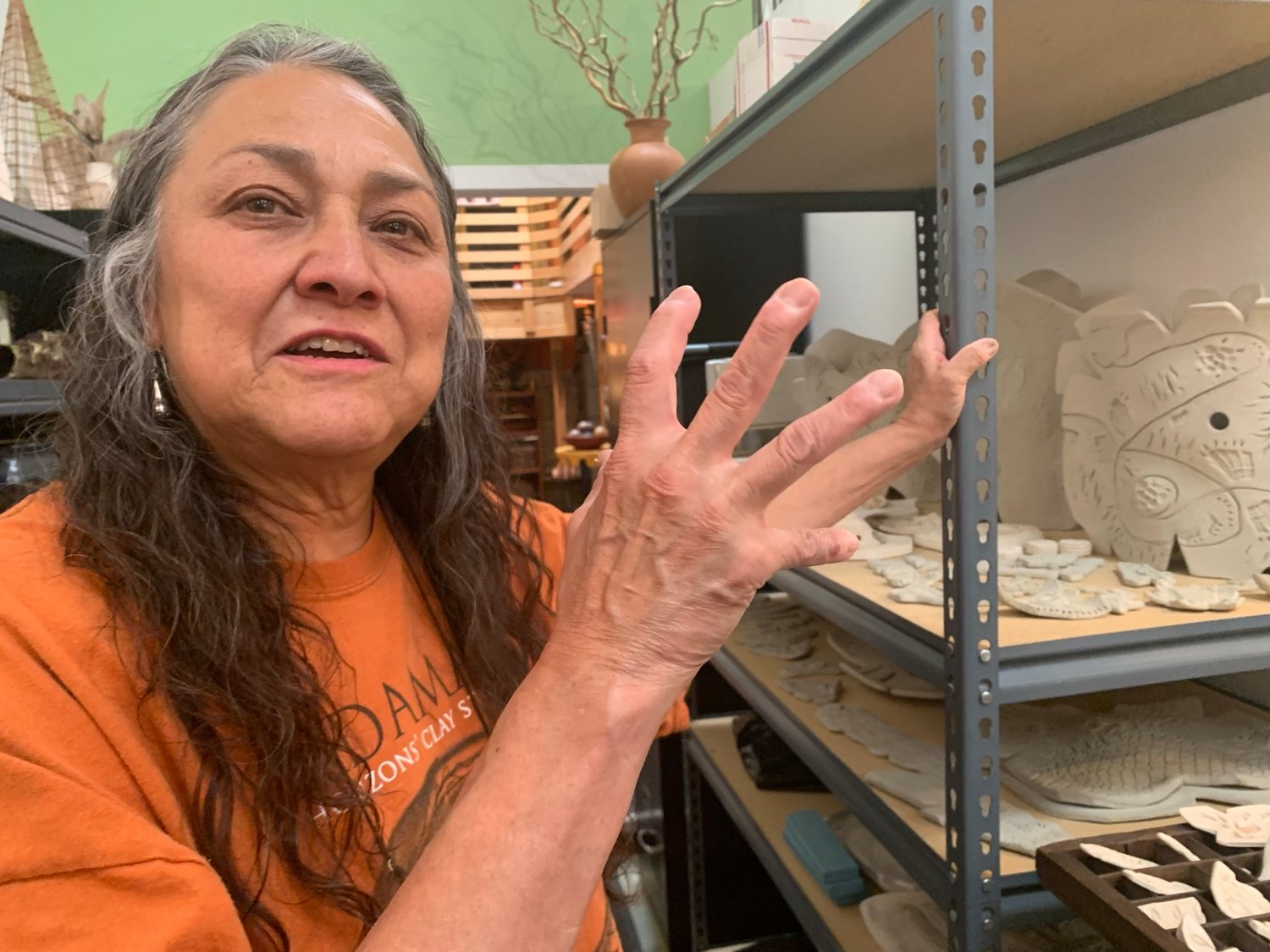 There's a lot of history here, so my philosophy really is to come back and kind of reconnect with my roots.”
Catherine Russo
By Elva K. Österrreich

Clay artist Catherine Russo hates to look for things. Walking through her space, The Seedboat Center for the Arts in Silver City, everything is in order, in place, ready to be used.

“I am so aesthetically driven because I hate having to look for things,” she said. “I have spent so many years in boxes with my stuff. So, I’m very organized. I’m told this is not typically the artist, but I like to look at myself as whole-brained and not just right-brained.”

As she creates slabs – rolled out large pieces of clay – and assembles her knowledge into artwork, she is weaving her own history into every piece. Going to one set of drawers, Russo pulls out swatches of fabric which she uses to texture her art.

“My process involves the use of saved fabrics,” she said. “For example, this fabric was an upholstery fabric my mom used on a set of chairs and a couch we had when I was growing up.”

But the drawers don’t only contain fabric but also an eclectic collection of everything with textures she can use. There are shells, seed pods, plastic mesh from grocery store fruit and hundreds of other bits and pieces reflecting Russo’s life. Objects collected by her past students and other childhood finds populate her cabinets.

“I’m very, very much into texture,” she said. “I relate texture to how we sustain in life. The bumps, bruises, injuries, pain and very much the love. I see the redemption in the scarring of the clay becoming a beautiful work. It’s very much metaphorical.”

From broken heart to broken elbow to trauma recovery to all the things in life that leave a mark, that’s the story Russo pours into her work as an artist. She begins building her slab sculptures by rolling them out, then she picks her fabric for textures, often combining various ones.

“I like to work so that my slabs come together and are related but not identical,” she said. “So, you get two sculptures in one because the two sides are very different and yet there is relationship between them.”

After a day working with slabs and thought, Russo takes a break but not from clay. She just goes a little smaller in scale and starts creating what she calls Zen gems. She and her students will create the Zen gems during the CLAY Festival workshop Russo is responsible for.

“They are small meditative pieces that are just meant to enjoy the simplicity of the form and how it would hang onto the wall,” she said. “They are little meditative prayer pieces – just little stories of themselves. They can be grouped together and turned into interactive story.”

The two-day workshop enables participants to make their own meditative Zen gem and incorporate pieces that create pattern and texture. She said she is asking participants to bring an object they can use to impress texture into the clay.

Russo’s space is full of not only her personal work both new and old but also collections from past students. By the time she retired in 2016 as an art teacher for K-12 students, she had taught for 37 years. In her most recent 20 years of teaching, at La Follette High School in Madison, Wisconsin, she taught the largest clay program in the city.

“We went through 16 tons of clay a year,” Russo said. “That’s how many students I had. So, I retired because I wanted to be an artist now that I have grown up and graduated.”

In addition to clay, she has worked and taught many different mediums from painting to leather craft to fibers and so has collected a lot of materials.

But Silver City is not new to Russo, she has deep roots in Grant County. Born in Silver City, she grew up in Hurley and went to college at Western New Mexico University.

Her great aunt was Jesusita Perrault, a friend of Georgia O’Keeffe and well-known artist in her own right. Perrault, considered one of the “great women of Taos,” served as an early state representative and had roots in Chihuahua Hill.

“There’s a lot of history here, so my philosophy really is to come back and kind of reconnect with my roots,” Russo said. “But also, to take the legacy that my aunt left. She was well known for her Spanish colonial style colchas – a specific type of needle work and going full circle back to texture, folklore, metaphor.”