SOUTH OF THE BORDER

Christmas Eve at the Border

Every ‘drop in the bucket’ counts 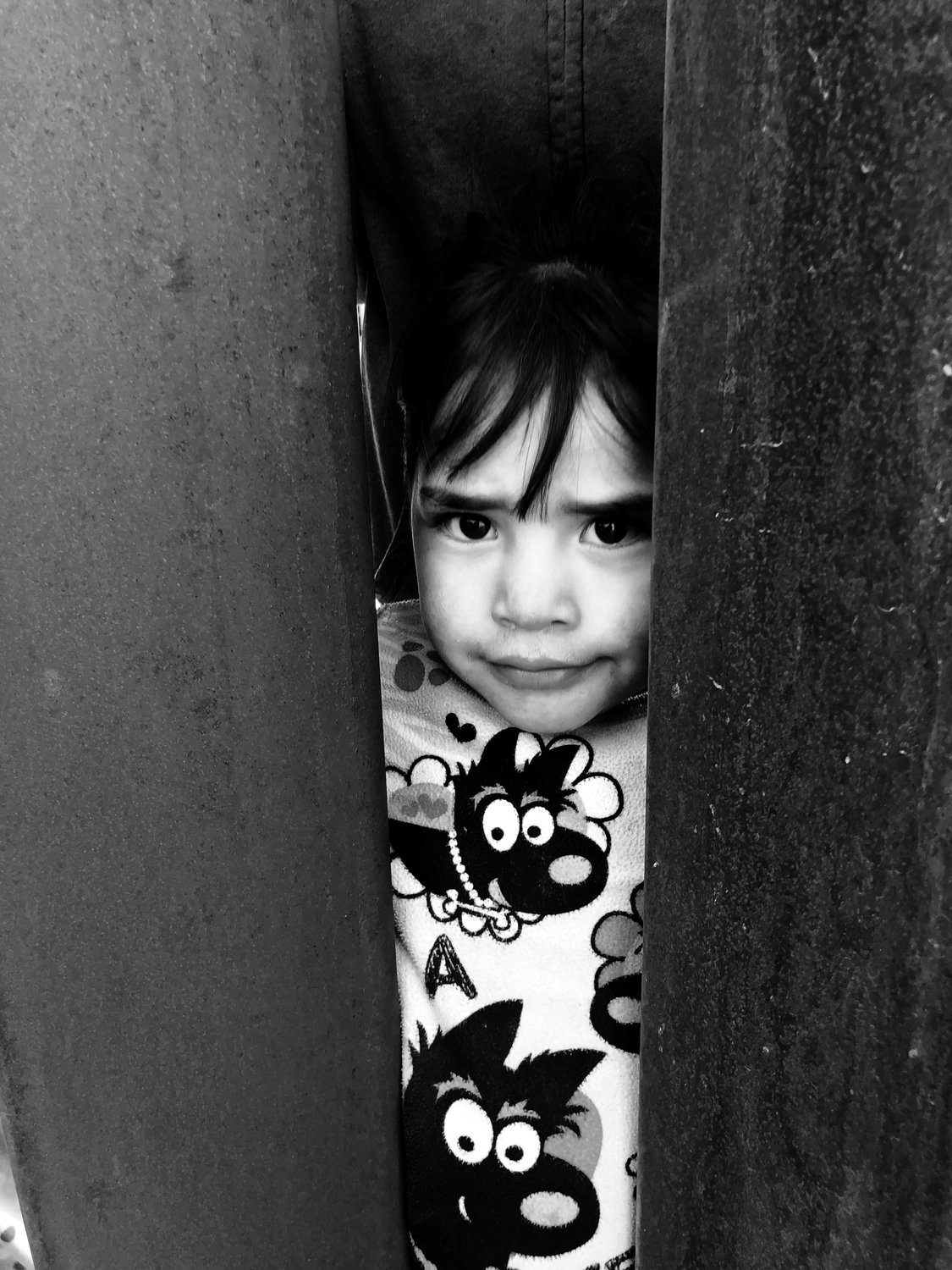 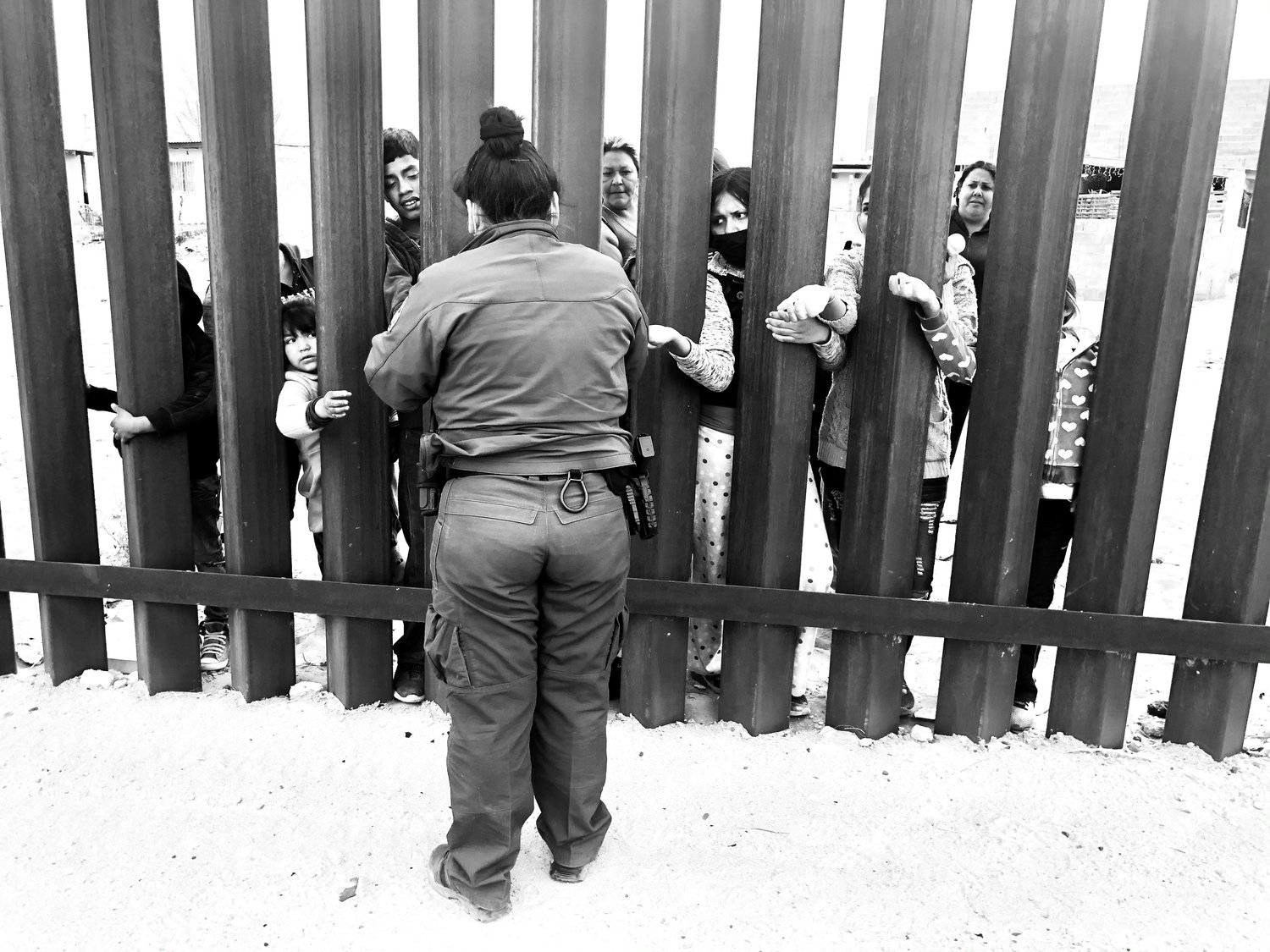 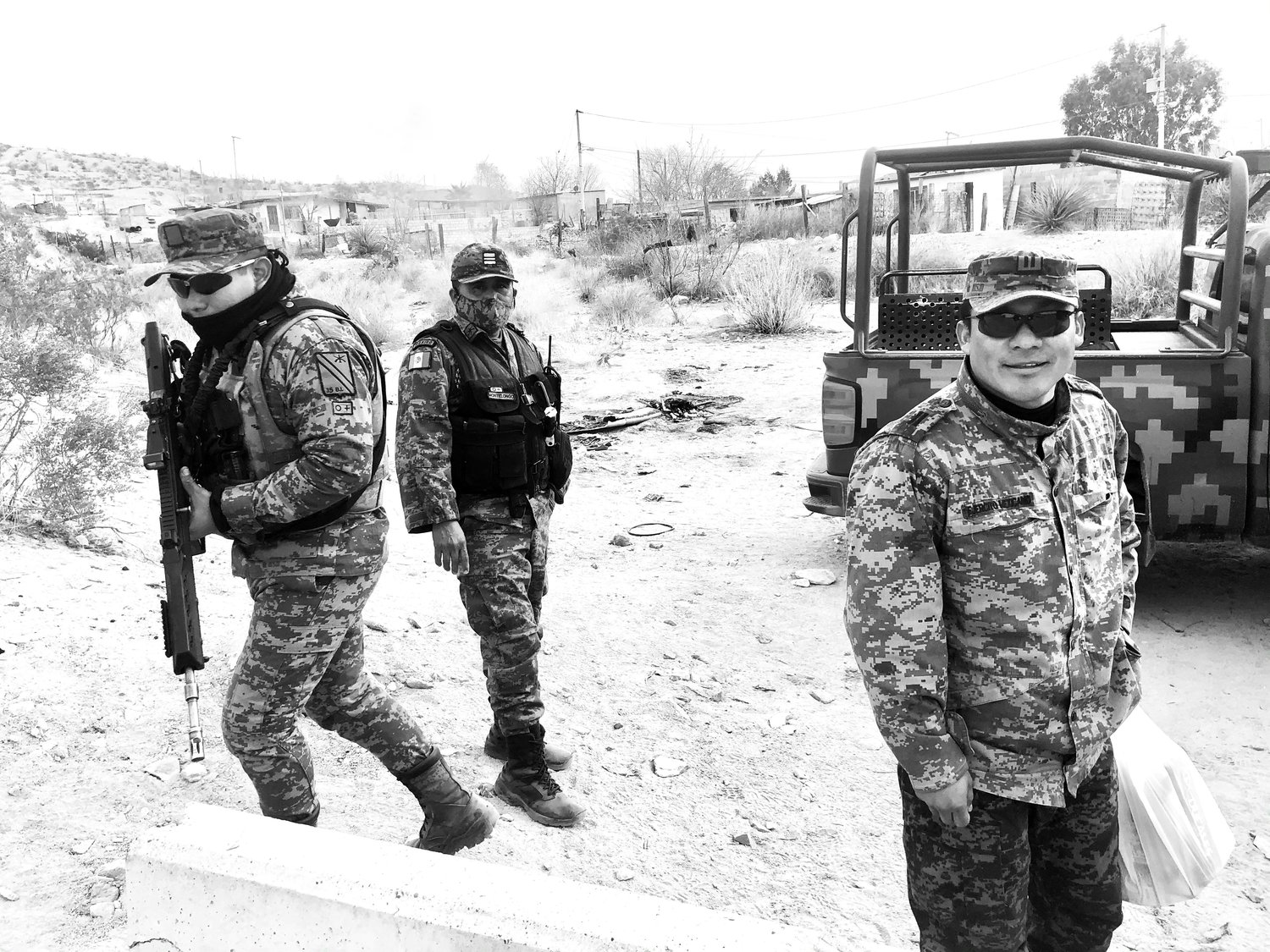 Mexican soldiers lieutenant from Tabasco on the right.
Photo by Morgan Smith 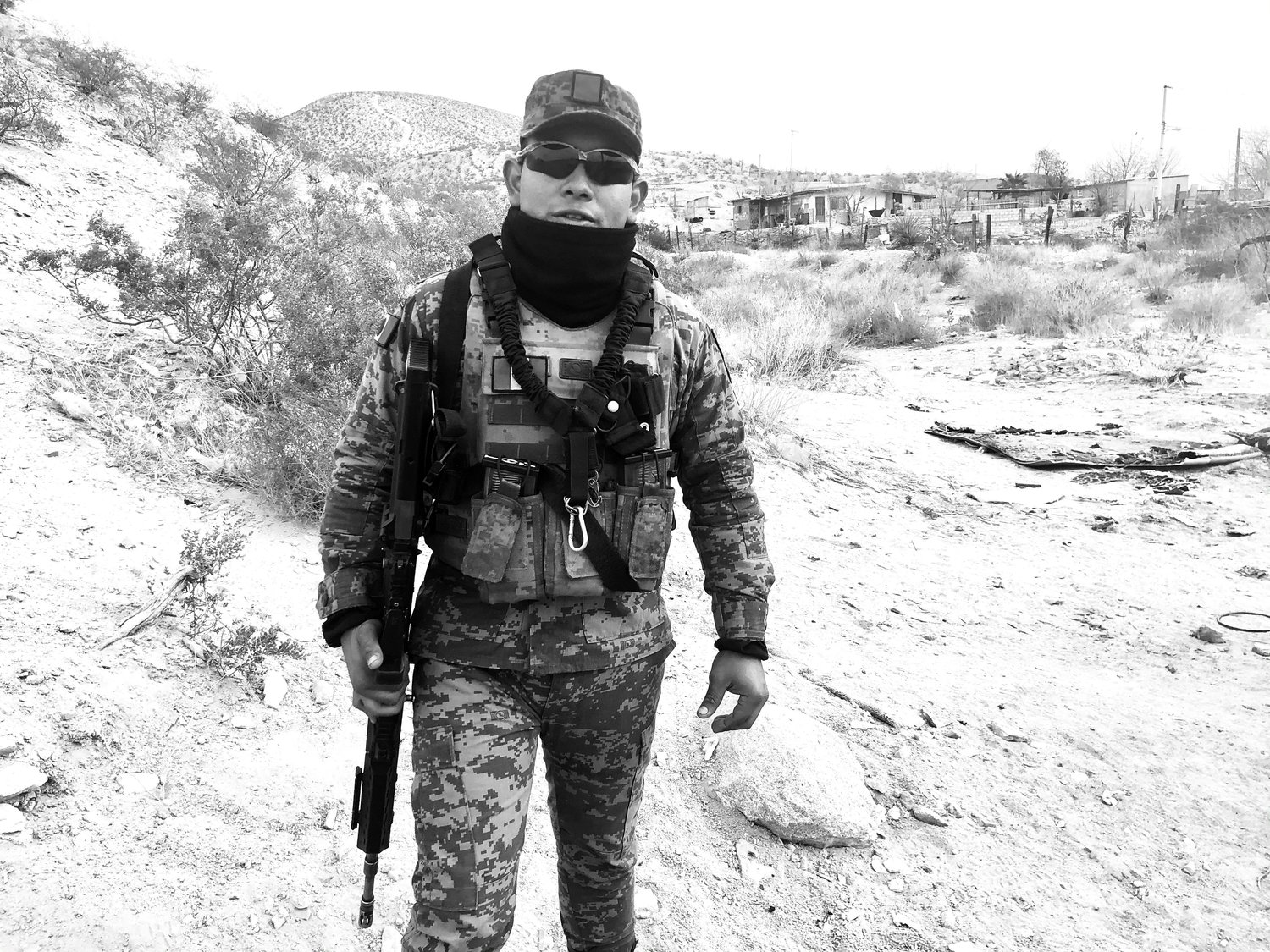 We left Santa Fe at 8 a.m., my wife, Sherry, and I with our two tiny dogs huddled in blankets in the back seat and a bag of sandwiches, apples, nut, brownies plus a cooler with drinks. The temperature was a bitter 11 degrees. It’s about 325 miles to the border wall west of El Paso and Juárez and between Sunland Park, New Mexico and Anapra, Mexico where we hoped to interview and photograph the Mexican soldiers who have been stationed there to keep migrants from crossing. For a decade, I crossed the border at least once a month to document conditions in the Juárez area as well as tiny Palomas to the west but I have only crossed once since the pandemic began; this border wall idea was to be a substitute.

It was 46 degrees when we reached the wall area at midafternoon and we waited while a lengthy train passed. A Border Patrol officer was parked near the tracks and told us he had been working in this area for 10 years and loved his work. He said migrants are still crossing over the wall with ladders or to the west where the wall ends at the beginning of the rugged slopes of Monte Cristo Rey.

I told him that we were going to follow the narrow dirt road eastward along the wall and look for Mexican soldiers on the other side. Often the Border Patrol will tell us not to do this because it is private property, but he simply said that he would keep an eye on us if there should be trouble.

Several kids from the Anapra side had gathered by the wall and we parked, gave them cash and took photos. The oldest boy was named Victor. Soon there were eight or nine kids, all reaching out through the bars. Normally we carry a wad of one-dollar bills but this time we ran out quickly.

At the end of the wall we found eight Mexican soldiers. The lieutenant was from the state of Tabasco, the others from Puebla, Tamaulipas, Veracruz and other states to the south. They appreciated the packets of cookies we brought and enjoyed having someone to talk to and break the monotony, especially when I told them that I too had once been a soldier. Contradicting the Border Patrol officer, they said that no migrants were crossing the wall. They did add, however, that much of their work was rescuing migrants who were attempting to cross via the very rugged Monte Cristo Rey. For women with children or older people, this would be a highly dangerous crossing, only for the truly desperate.

When the lieutenant finally agreed to letting me take photos, he told the others to get their weapons and helmets. Then as we were leaving, he reached out with his fist for a fist bump.

As we drove back along the wall towards where the boy, Victor, had been we saw another Border Patrol vehicle and pulled up next to it. The officer was a woman and it was hard to understand her because of her mask and a heavy accent. We assumed she was originally from Mexico as many of the agents are.

We finally understood, however, that she was not there to patrol. Her area was closer to El Paso. She was actually there to give cash to the kids on the Anapra side and their families.

I have been to Anapra many times, helped build a home there with a group from St. Bede’s Episcopal Church in Santa Fe, participated in an Operation Christmas Child event with Carlos and Hector Garcia also from Santa Fe, and have cruised through the dirt streets dozens of times looking for photo ops. It is an area of miserable poverty, so Sherry and I found more cash and pooled our efforts with the officer. When my cash was gone, I stood behind her and took photos, careful not to show her face and perhaps get her in trouble, although that seemed unlikely since the officer we first talked to was still parked by the railroad tracks only a hundred yards away and must have known what she was doing.

When her cash was gone, the officer said she would be back on Christmas Day with more. The crowd at the wall calmed. They believed her and so did we. She gave me her phone number and we’ll try to team up with her again on another visit.

This encounter was the highlight of our near-700-mile roundtrip. Yes, you can argue that handing a few dollars through the border wall is just a drop in the bucket, you can say that we need “structural reform” but I believe that we all ought to do the best we can, even if the amount is small. We ought to be like this woman officer, out there alone on Christmas Eve, showing that she cares.

Morgan Smith has been documenting border conditions for the last decade and can be reached at Morgan-smith@comcast.net.