Mining the Floridas might not be such a good idea 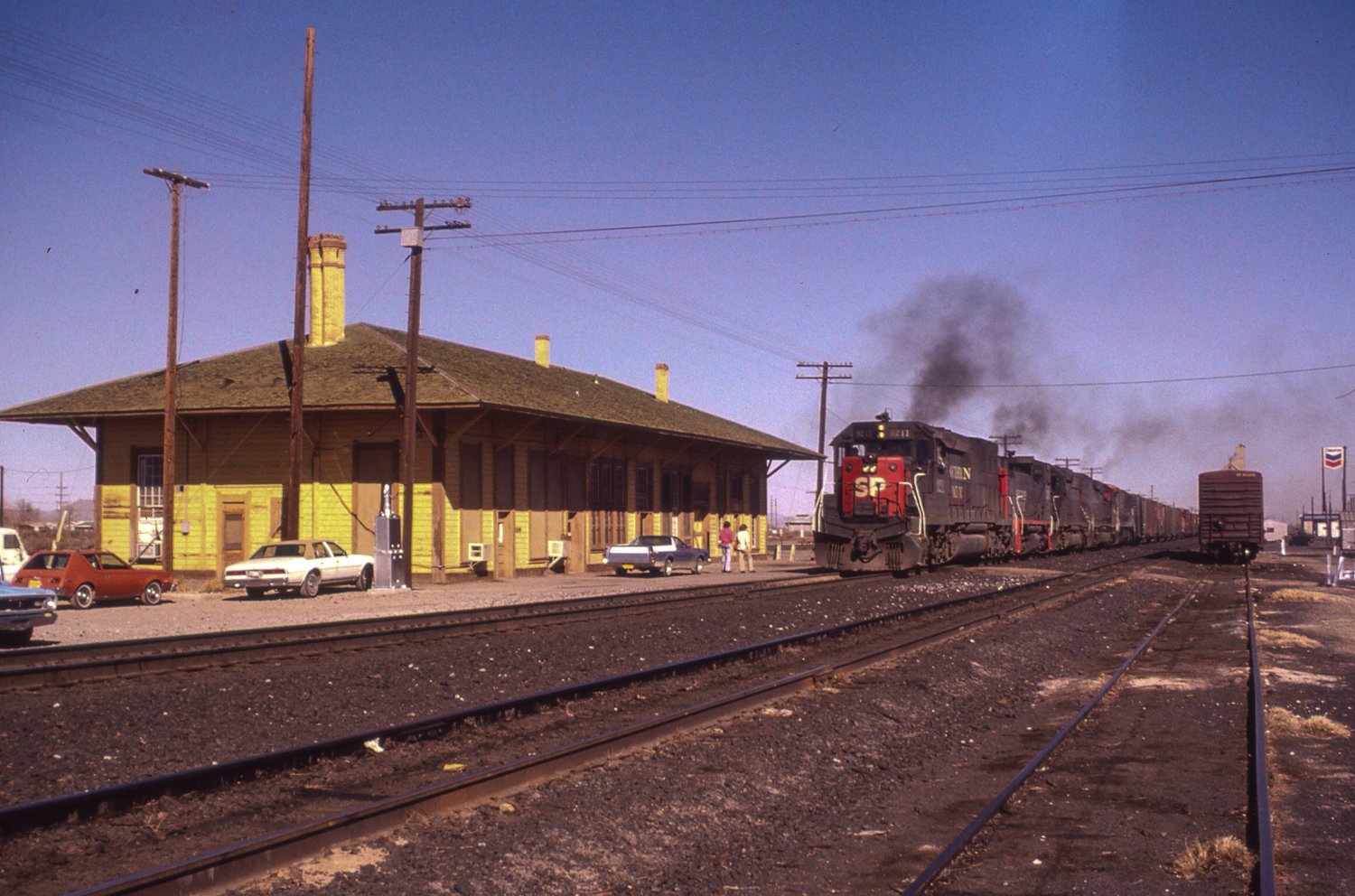 Renovated in 1930, the Deming Train Depot, long part of the landscape of the town was removed in the 1980s, leaving a platform and shelter only standing today.
Photo by Clay Gilliland, courtesy of Wikimedia Commons 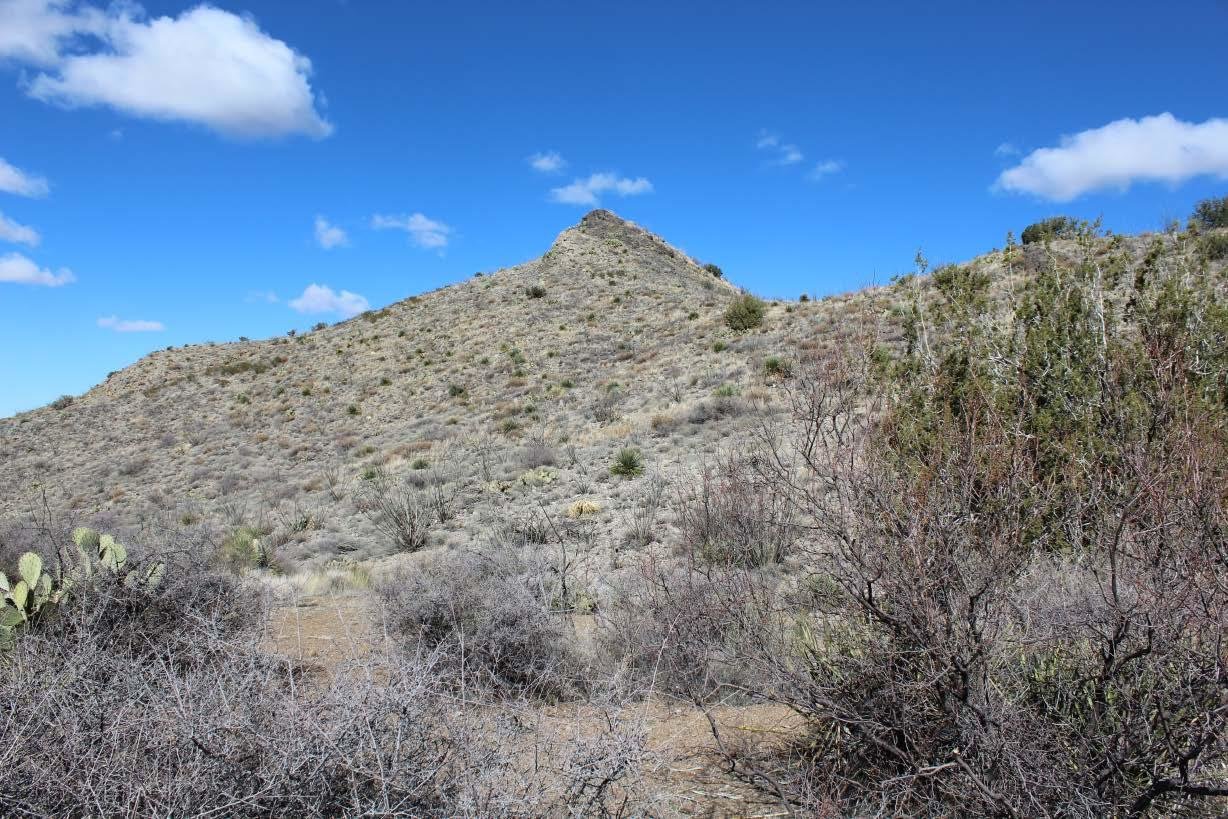 Hill targeted for leveling, which will likely leave a scar visible for miles.
Public Domain photo

Florida Mountains from the north The Florida Mountains southeast of Deming are the home of Rockhound State Park and numerous rock formations and wildlife for adventurers to experience.
Photo by Elva K. Österreich
Previous Next
Posted Tuesday, November 23, 2021 1:52 pm

Joel Chinkes is retired and has been off the grid since 1986 and has been keeping a close eye on the Floridas since 1995.

In the early nineteen hundreds

Deming was a railroad village

Next big railroad stop from Lordsburg

After railroad went to diesel

Less excitement, war was over

Thanks to Mimbres River water

In a place that seldom sees rain

Not much happens, which is good news

Just a dust storm, or a cold day

Made it pleasant place to live here

Rockhounds who would pick up samples

From a sea that's just a mem'ry

On the west flank of Flo-Ree-Dahs

Near the very edge of wildness

Not an ordinary rockhound

Staked a claim on BLM land

Free for all, this land call'd Public

Expected only men with mules,

With pickaxe, not with high explosive,

With shovel, not with front end loader

David spun out over twenty

Twenty mine claims on Flo-Ree-Dahs

Dream he did of jobs for Deming

Jobs for all of Luna County

Dreams of airport and refin'ry

Always planning for our future

Was our savior Dave Tognoni

"Right Away" the MainStreet echoed

"We don't need all of the details"

"Jobs are promised, let's get started"

Other agencies and people

Wait until he clarifies things

Not so hasty with their judgement

For example Fish and Wildlife,

Said a better place can be found

Further from the edge of wildness

Taking in the situation

Here's what the planners said to do:

Is a hillock made of metal

First you have to melt the big rocks

Dolomite is name of big rocks

Not quite sure how much is in there

Dave the Dreamer only took chips

Just a few chips off the surface

Need to drill and blast the hillock

Count up all the dolomite there

But Tognoni skipped this big step

Money flow is the suspicion

As the target of the mine claim

Dolomite is just a proxy

For the payoff to Tognoni

Propane from a giant pipeline

Not too far from PNM Plant

Power Plant is north of Deming

Eye-Ten highway lies between them

Interstate is just one problem

Railroad tracks stand in the way too

Not so easy moving mountain

With interstate and rails to cross

Only way from Park to Plant site

Trucks and traffic will be chaos

Big mine trucks at Pine and Gold Streets

Mine truck traffic won't be minor

Empty trucks on their return trip

Burning propane makes a lot of

Caused by too much C-O-Two gas

If the mine jobs really happen

Have good jobs but do not live here

For the shopping and the high schools

Dave Tognoni had some practice

Maybe Deming would be easy

Maybe dreams would work out this time

BLM is the landowner

Mining permit will be needed

Dust and water, loss of quiet,

Planning rules are known as Nee-Pah

Nee-Pah is the path to get there

If you want to blast the mountain

You must jump the hoops of Nee-Pah

Years it takes to get a permit

But some disappointed locals

Interfered with all the planning

Horning in on dreams of David

Interfering with his mining

Gaps were found in all his planning

Such as people living nearby

Such as overhead conveyor

Plans were changed to pass inspection

Of the rest no hint was given

Suspicion grew this was a fake-out

Many thought the mine was finished

But his mine claims carried forward

Thanks to newfound heir named Carol

He was college educated

Mining projects not her background

'Til at last the Feds okayed it

"Yes, you can deface the mountain

Blast and haul off our Flo-Ree-Dahs"

"FONSI" how it's really spelled

Fon-Zee says there is no impact

Or at least no major harm

Hasty was the BLM "Finding

of No Impact" to this plan

BLM did not dig too deep

With an email conversation

Formed the "Friends of the Floridas"

For their sloppy plan reviewing

Ask a Judge to throw it all out

Stench of mine plan reached all over

Joined with locals in their suit

When a lawsuit up and hit them

BLM was in a tight spot

Had to call in Justice lawyers

To rectify the mess they'd made

Justice said to BLM they

Do not want to lose abjectly

Months went by without a word

While BLM tried to recoup

With reasoning yet more absurd

And that is now where matters stand

BLM is on the defense

With four strong allies by their side

To hear all Motions, read all Briefs

Decision will be up to Judge then

They may have to start from scratch

But if not, the fight proceeds to

"Flo-Ree-Dahs" in the Anglo tongue

NM Department of Game and Fish suggest mining someplace else, and also  say "the Plan of Operations significantly under represents the diversity of wildlife". See Pages 14 & 15:

How to Melt Dolomite Rocks:

Opinion on Economic Impact on Deming from Mining:

Battle of Floridas War Memorial Placed in Virginia, not in New Mexico:

David Tognoni mining without permission then appealing judgement when caught:

Examples of Small Towns With Big Metal Industries (albeit non-Magnesium):