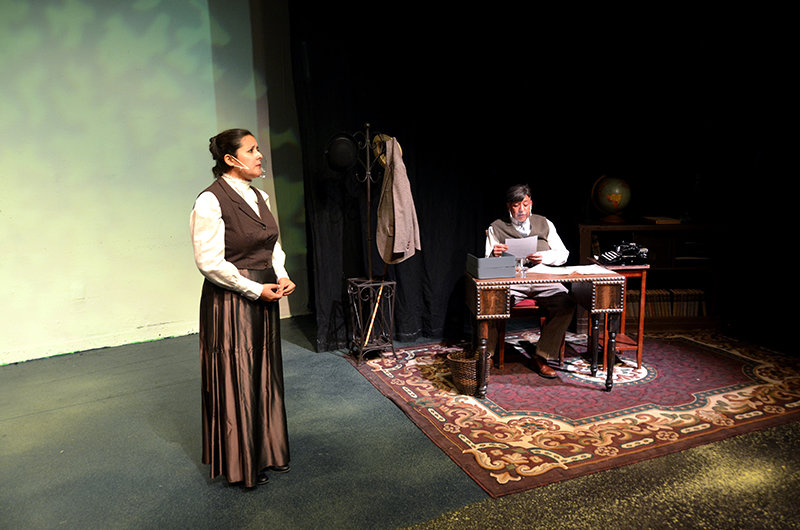 There is an Old-World charm about Black Box Theatre’s (BBT) current production of “Daddy Long Legs” that you feel as soon as you enter the theater and hear accompanist Barbara Toth’s beautiful piano music.

It reminds us that this is live theater, with a cast of real people and a living, breathing, working crew at the piano, behind the curtain and in the light booth above.

That charm continues as actors Cristina Zermeno and David Arias enter the stage and you see Autumn Gieb’s wonderful costumes and the scenic and lighting design of Peter Herman, which creates a closed and separate world for each character – but also a matching set of the classics in each room and the paper, pen and inkwell that will bridge the gap between them.

Through the images that director Nikka Diemer and these two talented actors create as they write and read letters to each other, we feel that space that lies between them: He is a powerful and wealthy benefactor; she is a penniless orphan blessed with intelligence and drive. They are drawn together by a need for human connection and a love of literature and knowledge that will not be denied.

As they speak and sing – many of the songs are a continuation of the text, adding rhyme, rhythm and music to the spoken word – there is a memory of simpler times. They communicate with each other only through their letters, which convey their deepest sorrows and greatest hopes.

This is Zermeno’s first performance at BBT, and her first lead in a musical. She has performed in a number of shows in El Paso theatres, and you will enjoy her performance as Jerusha, with the music and lyrics of Paul Gordon and book by John Caird, based on the novel by Jean Webster.

Arias is a BBT veteran, with performances in “La Marquise du Chatalet Defends Her Life Tonight,” “Little Shop of Horrors,” “A New Brain” and several other shows in the last few years. He brings a sweetness to Jervis Pendleton/Daddy Long Legs in his letters and his songs that makes you ache for the two characters to read between the lines and cross the space between them.

I must say, my favorite of the cast and crew biographies comes from the show’s musical director, Barbara Toth: “My daddy won a piano in a poker game when I was just 4, and the rest is history.”

Her music is the perfect complement to the work of Arias and Zermeno and the crowning touch on a production you will enjoy.

Tickets are $15 regular admission; $12 for students and seniors over age 65; and $10 for all seats for the Thursday, Dec. 2, bargain night performance only.