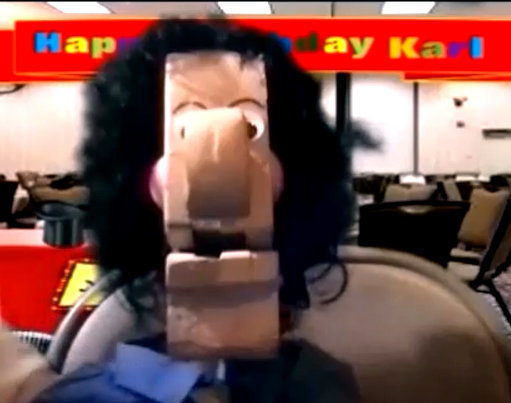 There is no charge to watch the play, but reservations are advised. To make a reservation, e-mail nstcbbt@zianet.com and the login information will be provided.

Here is BBT’s writeup about the play, from the director, the playwright and Brad Martinez:

Hello and welcome to the 17th floor of your office at Exxon Mobil! Your office mates are jerks except for poor Karl (Monte H. Wright), the office geek. Today's his birthday and you're invited! Get ready for a Bloody Mary, a wild dance and wilder ride!

“Karl the Magnificent” is a story about the geekiest guy in town, who is bullied and stepped on by his coworkers. It is also about the lengths people will go to survive. When Karl's birthday party comes down to a special announcement, his coworkers Maggie (Rachel Thomas-Chappell) and Raymond (Genno Tafoya) will find the guy they have been bullying for the better part of their days now holds the key to not just their future but the future of the entire universe.

This play will leave you in stitches with its absurdity and fun while shining a light on some issues with humanity and asking questions like, “How can we be kinder human beings? and Who wrote the word dumbass' on my car?”

Downs brings together the wild world of Wyoming's Yellowstone National Park with the whimsy of a dummy, no, not your co-worker, Raymond, but one of the many secret talents of Karl, the dummy who would prefer to be called “Karl the Magnificent” (played by Joseluis Solorzano).

Join BBT’s No Strings Theatre Company on this zany journey where human destiny hangs in the balance as Karl selects his chosen people for the deep-sleep cocoon pod which could mean the difference between survival and destruction through this apocalyptic explosion of fun.

“Karl the Magnificent” is the sixth play by Downs to be produced by BBT, along with “Cockeyed,” “Mad Gravity,” “Seagulls in a Cherry Tree,” “Headsets,” “How to Survive Your Family at Christmas” and “Asking Strangers about the Meaning of Life: A Zoom Play."