The war of the gods memorialized 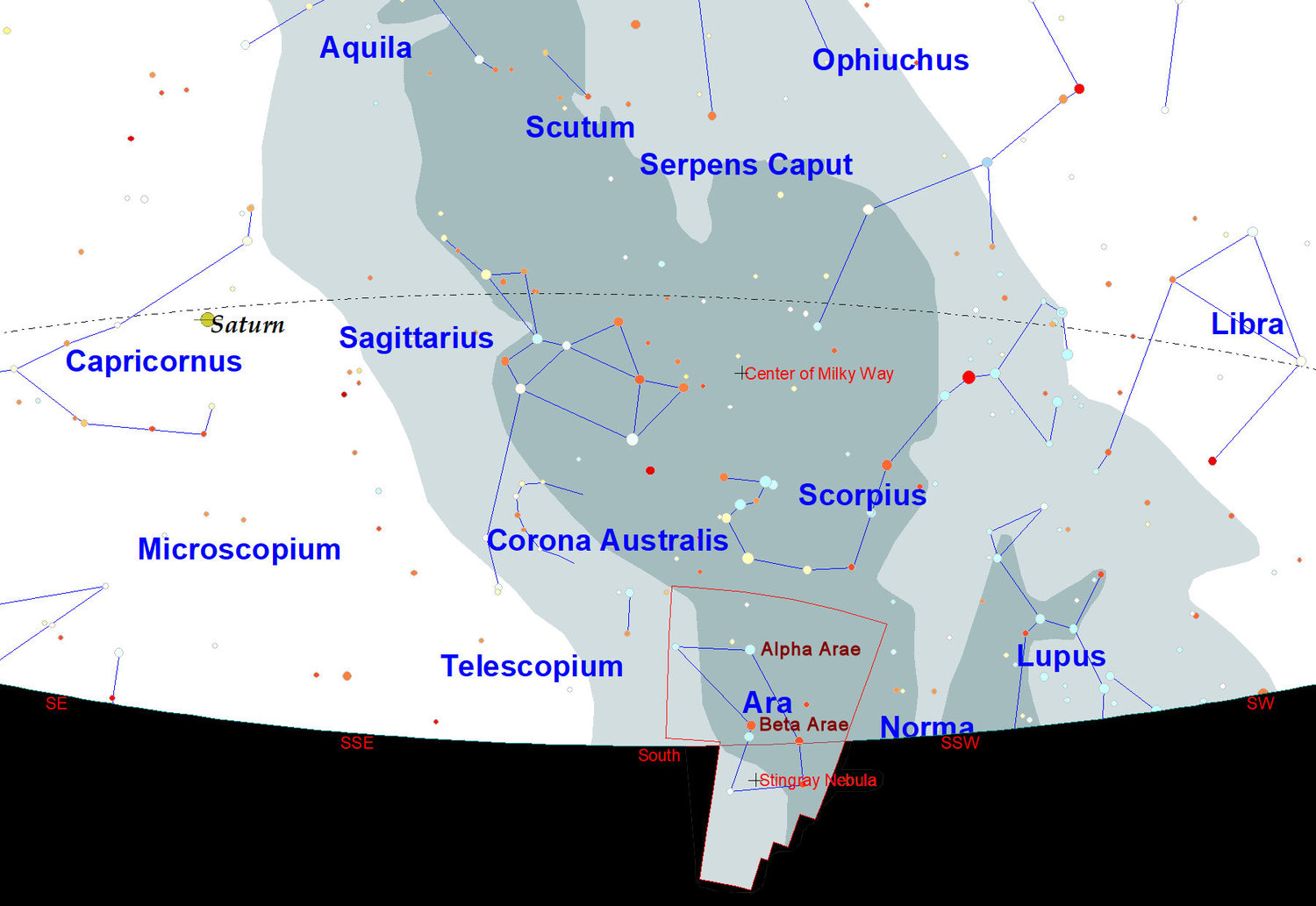 Only the northern half of the constellation Ara, the Altar, manages to creep over our southern horizon. This small constellation has more than its share of deep sky objects because it is deep in the Milky Way where there are many more deep sky objects than outside the Milky Way. Look for Ara just below the stinger of Scorpius, the Scorpion.
Posted Wednesday, September 1, 2021 5:54 pm
Calendar of Events – September 2021 (MDT)

Never getting more than its northern half over our southern horizon, the small constellation Ara, the Altar, is 63rd in size out of the 88 constellations. Ara can be found directly beneath the tail of Scorpius. The two brightest stars in Ara are far enough north so they peak over the horizon to appear in our southern sky.

In Greek mythology, before the time of the familiar Greek gods, the universe was ruled by Cronus, one of the twelve Titans. Cronus (or Kronos) was the youngest of the Titans, descendants of Gaia (Mother Earth) and Uranus (Father Sky). Cronus had deposed his father to become the chief god, ruling over the mythological Golden Age with his sister and then wife, Rhea, at his side.

But the crown did not sit easily on his head because prophesy said that he in turn would be deposed by his son. To prevent the prophesy from coming to pass, he swallowed each of his children as they were born. When the last was born, his wife gave him a stone dressed in swaddling clothes to swallow while she gave the child to her mother, Gaia, to raise.

The child, Zeus, grew up safety sheltered by Mount Ida on Crete. Reaching maturity, he returned to Cronus’s palace. Cronus had forgotten the prophesy and did not notice when his wife gave him a cup of wine with a substance that caused him to regurgitate the stone and the rest of his children. Zeus sliced Cronus open and his blood fell on the ground. The children emerged fully-grown in complete control of their godly powers. Zeus and the children swore allegiance to each other and to fight Cronus on an altar, now memorialized as the constellation Ara.

This started a 10-year war between the Olympians, led by Zeus, and the Titans, led by Cronus. The Olympians were victorious in the end. Zeus took pity on his father and placed him in charge of the Elysian Fields, a peaceful place awaiting the righteous dead. Cronus became known as a god of kindness, benevolence and generosity. We identify him with Father Time, with his scythe representing the harvest.

Alpha is a massive blue star of spectral class B2 that is two-hundred-seventy light-years away from us. It is almost ten times the mass of our Sun. Alpha is spinning very rapidly, so rapidly that the equatorial diameter is two and a half times the polar diameter, a really squished ball. This has allowed gas to escape from the star and form a cloud around it. If this star was spinning any faster, it would fly apart.

Beta Arae is an older star, just over eight solar masses. It has run out of hydrogen in its core and has expanded greatly as it changes energy source from fusion in the core to hydrogen shell fusion around it. Alpha is transitioning between two stages of its evolution as a giant star, midway between a higher luminosity bright giant and a lower luminosity supergiant. It is 720 light-years away.

The plane of our Milky Way galaxy traverses Ara’s northwest corner. This places a large number of deep sky objects in this constellation considering its small size.  One of these is the Stingray Nebula (Hen 3-1357), about 18,000 light-years distant. This is a planetary nebula has an old star (SAO 244567) at its heart. It had been shedding its outer atmosphere, forming a cloud of gas around the star which is one hundred and thirty times the size of our Solar System.

The star was not producing enough ultraviolet light to make the gas glow like a neon tube. Before 1987, the star’s temperature increased over seventy thousand degrees Fahrenheit, hot enough to ionize the gas making the nebula start to glow. At its great distance, the Stingray is very tiny and only the Hubble Space Telescope could discern the 1.3 seconds-of-arc across nebula.

The central star appears to be a white dwarf with a companion star that was donating hydrogen to the white dwarf. The hydrogen fused on the surface of the white dwarf to form helium. That helium, along with donated helium from the companion star, build up until it gets hot enough through compression to start fusing in a helium flash. This tremendous burst of energy lit up the surrounding gas to form the Stingray Nebula.

Recent observations have shown the Stingray is starting to fade as the energy from the helium flash is radiated into space. As the white dwarf cools, the Stingray will fade out of sight, perhaps to be reinvigorated if another helium flash occurs far in the future.

The Planets for September 2021.

While Mars is too near the Sun to be seen this month, Mercury is gliding southward along the western horizon. This is a poor apparition of the planet for northern hemisphere observers, with Mercury reaching its greatest distance from the Sun on Sept. 14, when it will be only six degrees above the west-southwestern horizon as it gets dark. At that time, the Messenger of the Gods will be magnitude +0.2, with a disc that is fifty-six percent illuminated and 7.1 seconds-of-arc across. It sets around 8:15 p.m. During the month it moves from western to south-central Virgo.

Fifteen degrees above the west-southwestern horizon as it gets dark, Venus sets around 9 p.m. This month it travels from central Virgo to central Libra. Shining at magnitude -4.1, the Goddess of Love has a disc that is 16.7 seconds-of-arc across that is 67 percent illuminated.

Already 27 degrees above the southeastern horizon as it gets dark, Saturn sets around 3:15 a.m. Moving slowly westward in western Capricornus, it glows at magnitude +0.4. The Ringed Planet’s disc is 18.0 seconds-of-arc across and its Rings are 40.7 seconds-of-arc across, tilted downward 19.3 degrees with the northern face showing.

Jupiter shines at magnitude -2.8 as it moves slowly westward in eastern Capricornus. It is twenty-one degrees above the southeastern horizon as it gets dark, setting around 4:30 a.m. At midmonth The King of the Gods’ disc is 47.8 seconds-of-arc across.

Earth reaches the September equinox at 1:21 p.m. on Sept. 22. On this day the Sun crosses the celestial equator heading south along the ecliptic. Days and nights are approximately the same length all over the world, hence the name, derived from Latin for equal-night. After the equinox, our nights will get longer giving us more time to "keep watching the sky"!