Among the Hueco Tanks 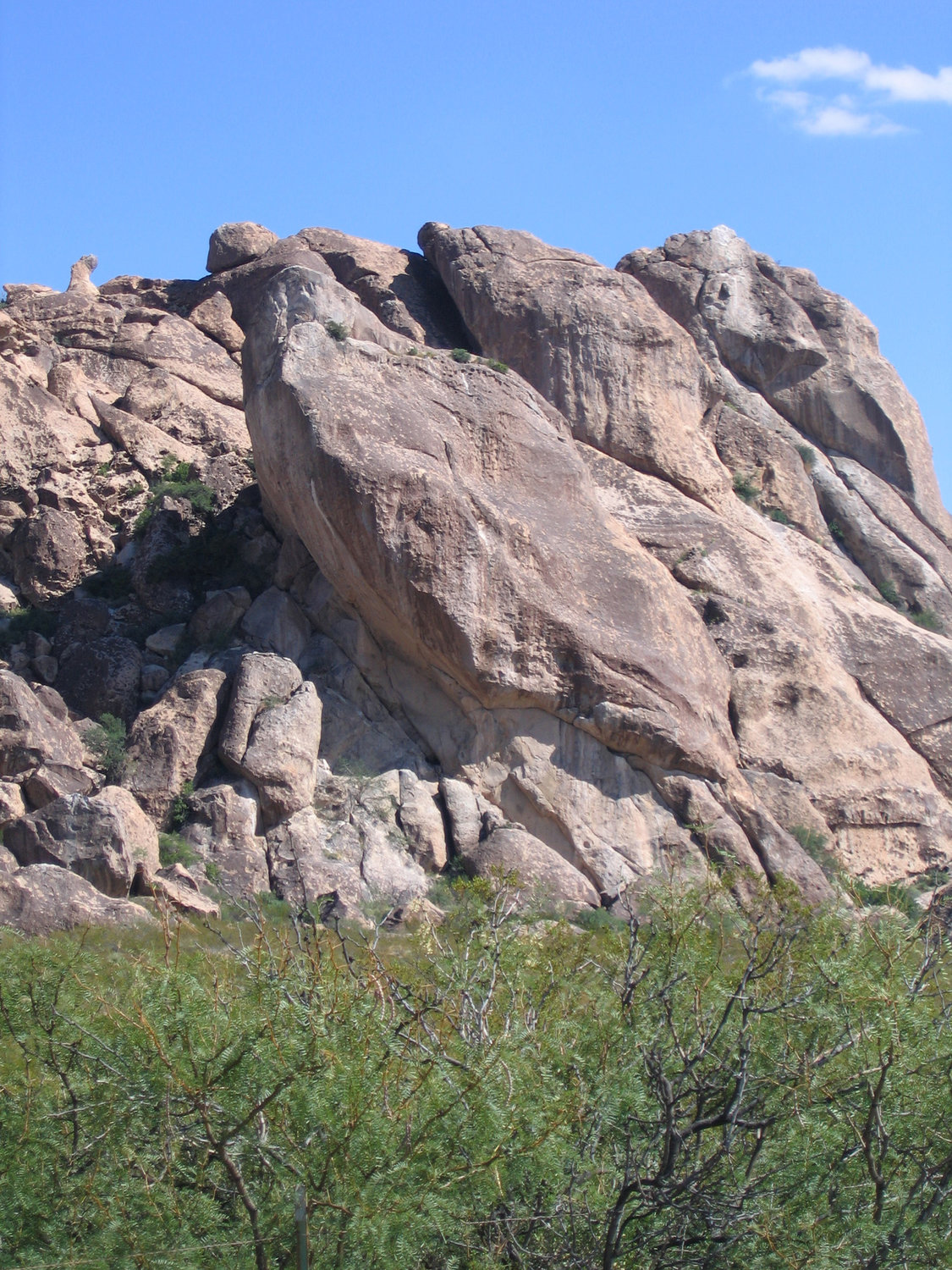 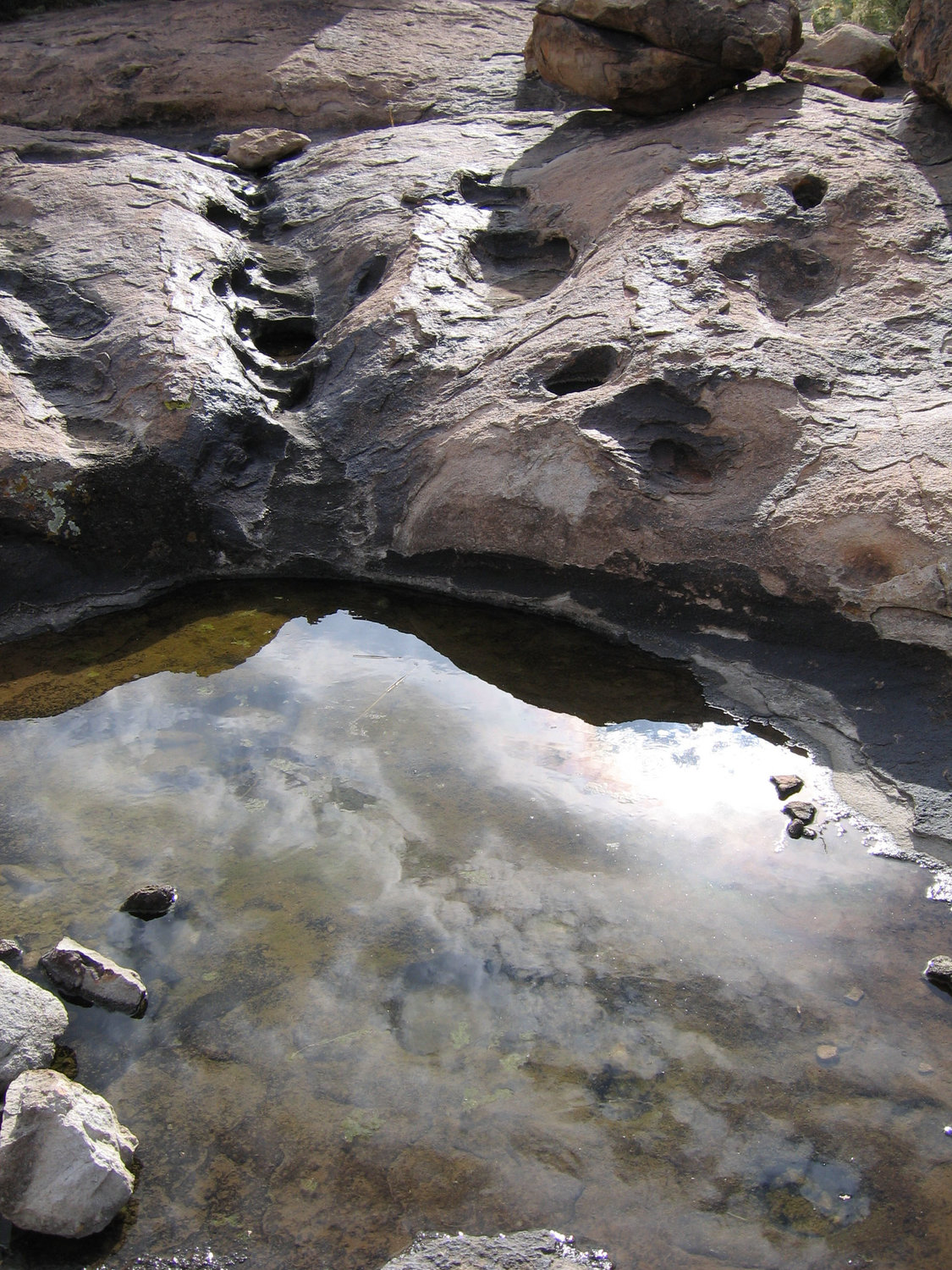 A precious pool of water formed by torrential downpours and dust storms scouring the stones reflects the sky world on a bright cloudy peaceful day.
Photo by Joan E. Price 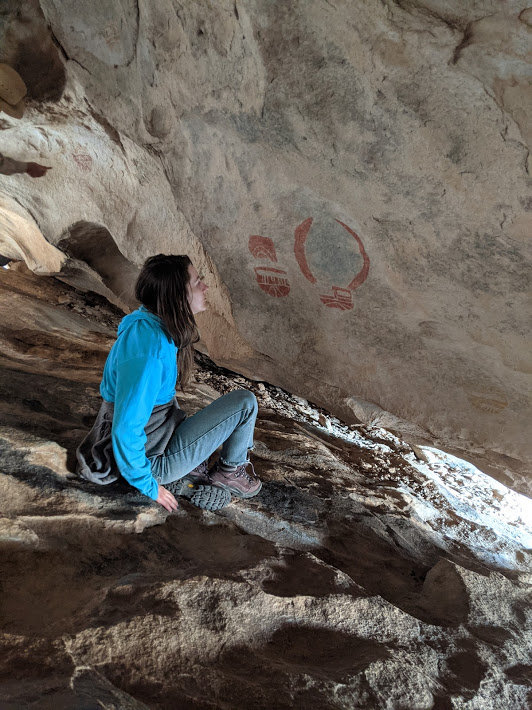 A “House of Rain” emerged, a child of volcanic power, east of El Paso, Texas, thousands of years ago. A deep earth event pushed molten magma some 200 feet up which then cooled and hardened to granite under a thick limestone cap. The relentless climate processes of drought, fire, driving torrential downpours and scouring dust storms created a cluster of granite domes laced with hundreds of horizontal and vertical channels and shafts; a maze of water pools now rest at the base and deep inside the stone domes.

The deep internal shade and water pools became a vital oasis, drawing migrating humans, hunter gathers who crossed and recrossed the everchanging Trans Pecos lands since paleoindian times. They began to leave their painted testaments (pictographs) of appreciation on its internal cave ceilings and walls of refuge from the natural elements of atmospheric erosion. The floors of many shelters are slick from the eons of human bodily movement, ofttimes crawling and sliding, searching for water and refuge.

Today, the environmental and cultural history of centuries have been recognized at the national level. In January 2021 Hueco Tanks State Park and Historic Site was designated a National Historic Landmark by the U.S. Secretary of the Interior. The application and nomination process took years, officials said in a news release.

“It’s estimated that there are between 3,000 and 6,000 pictographs at Hueco Tanks, including the largest concentration of painted masks or face-like figures in North America,” said Tim Roberts, a cultural resources coordinator for the Texas Parks and Wildlife Department. “There are also extensive archeological deposits across the 860-acre property. It is the combination of these resources, as well as the oral histories and traditions of modern tribal communities, that help tell the story of those that have lived and traveled through the area for more than 10,000 years.”

Water from eons created cool resting stops and shaded pristine water pools supporting wildlife and plant communities, many of which are unique to the park. A tiny fairy shrimp emerges in newly filled pools from long periods of waiting through drought cycles; jaguar habitation painted on the walls record their dignity before they were exterminated; plants and ferns that can survive in small ecosystems like natural seed banks replenish the surrounding areas in climate cycles of years of rain.

From the Pony Express to the Butterfield Stagecoach events to the occupation and stewardship of the Encontrias family, modern history generated numerous stories of the new wave of people and their migration from east to west.

Several years after the state of Texas bought the property from a private recreational development venture in 1969, Hueco Tanks was opened to the public in 1970 and then placed on the National Register of Historic Places in 1971. The site was designated an official State Antiquities Landmark in 1983.

The fledgling staff began to guide local visitors, tourists, recreationists and scientists. Thus began the arduous walks through the hallways of county commissioners, Texas State Park offices, universities departments and encounters and negotiations with the indigenous Native Americans whose ancestors had filled its crannies with their painted imagery to protect the landmark and educate the public to its fascinating call.

In particular, Hueco Tanks sheds light on the Jornada Mogollon people, who were early farmers in the area 550 to 1,800 years ago. They considered Hueco Tanks a sacred place within their ancestral landscape and the images that they painted on the rocks are thought to represent the beginnings of the Southwestern Katsina belief system that still guides Puebloan societies today, officials said in the news release. The Kiowa, Mescalero Apache, Comanche, Ysleta del Sur Pueblo and the people of the Pueblo of Isleta also consider the site to be an important part of their heritage, officials said.

“Hueco Tanks is one of the most unique and special places in Texas,” Rodney Franklin, director of Texas State Parks, said in a news release. “It is an honor for the Texas Parks and Wildlife Department (TPWD) to care for a place with deep connections to so many people. I appreciate the hard work and persistence of the truly dedicated team of professionals that made this important designation possible.”

"As a National Historic Landmark, Hueco Tanks will be afforded access to resources, opportunities and additional protections that will further enhance our ability to steward this cultural icon for many years to come.”

If you would like to spend some time at this ancient landmark, you will need to make reservations for either day passes or camping facilities. Start your search at  https://tpwd.texas.gov/state-parks/hueco-tanks.

Joan E. Price is a writer and photographer based in Tularosa, with a focus on the cultural landscape of the Tularosa Basin.