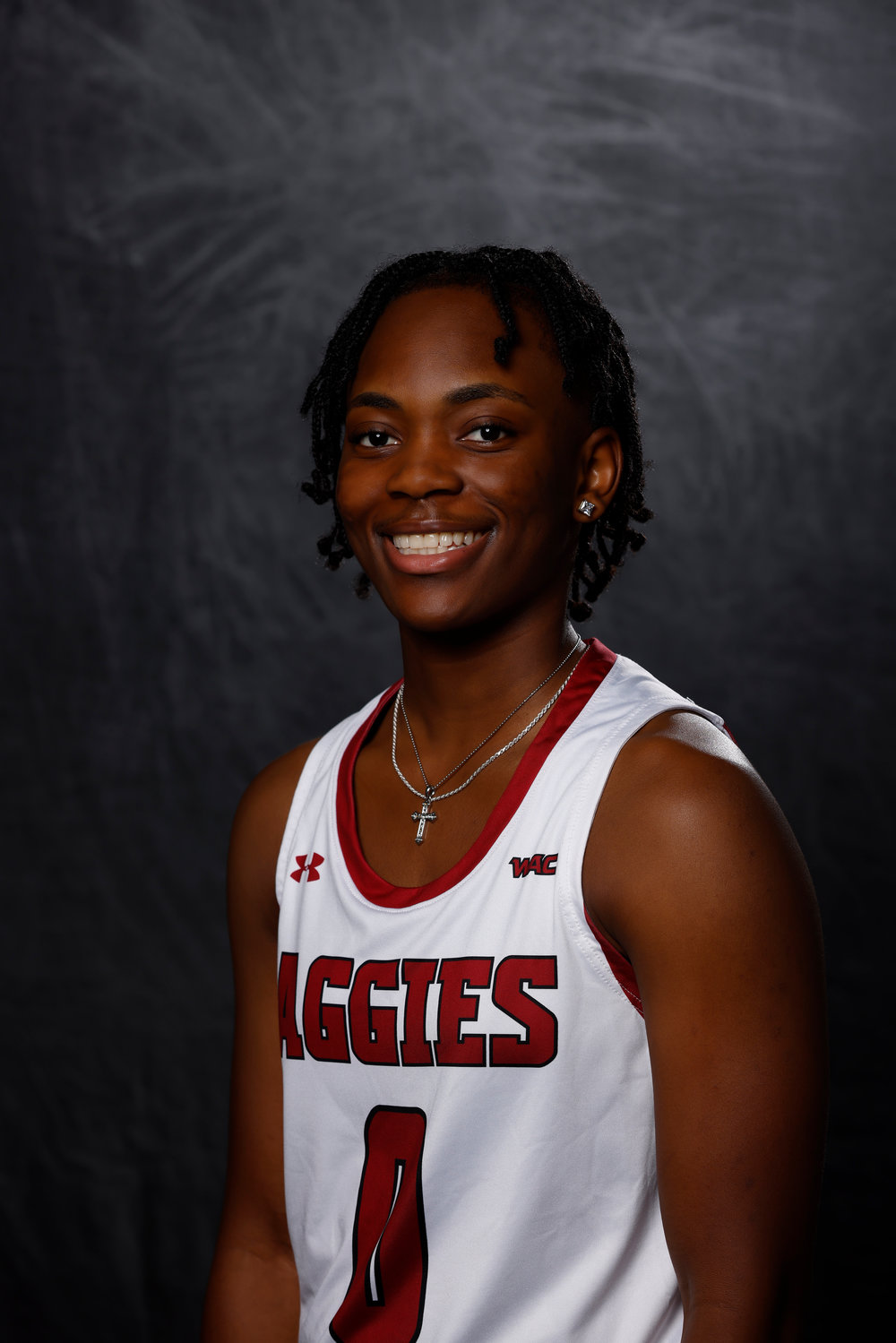 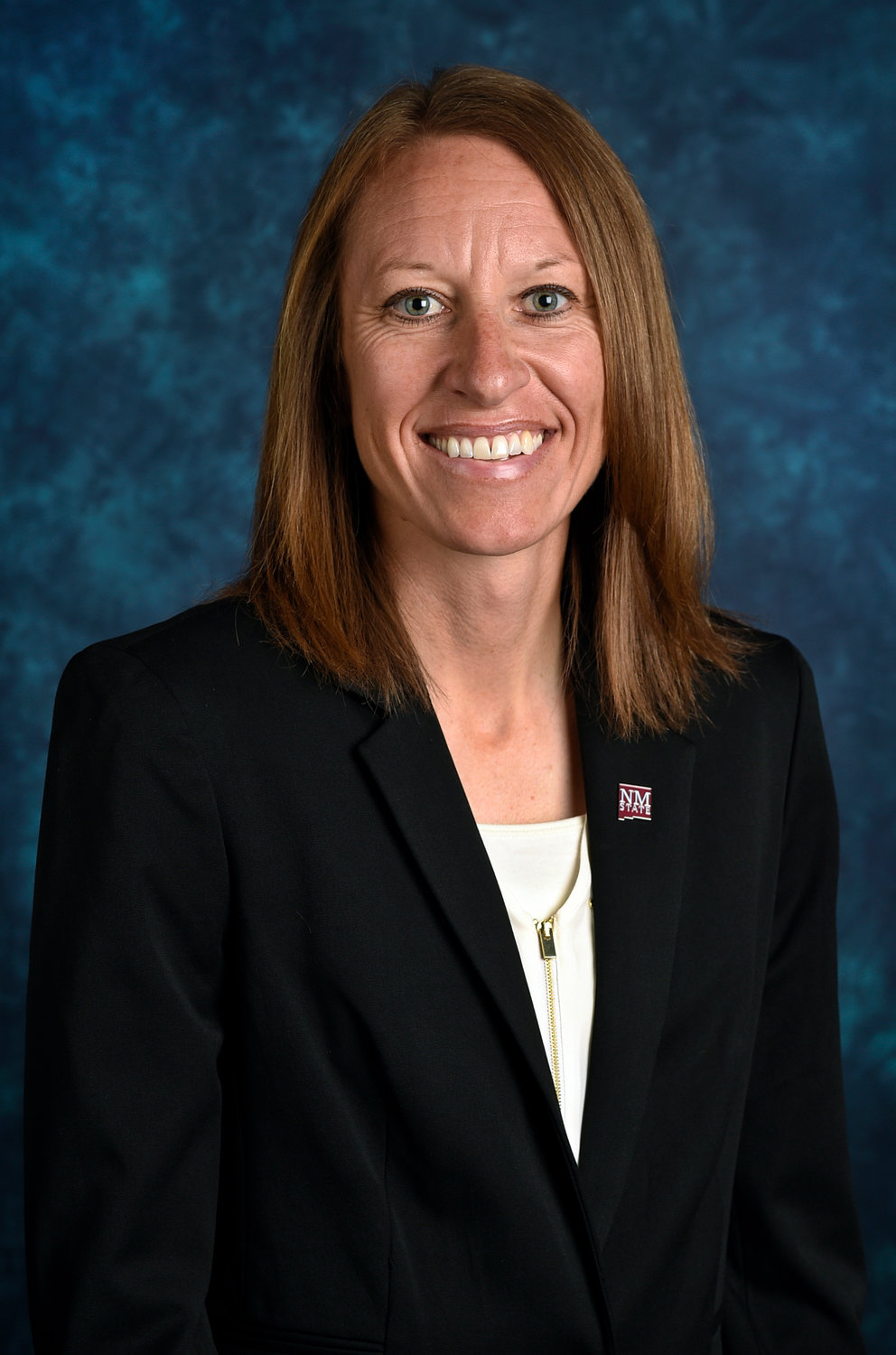 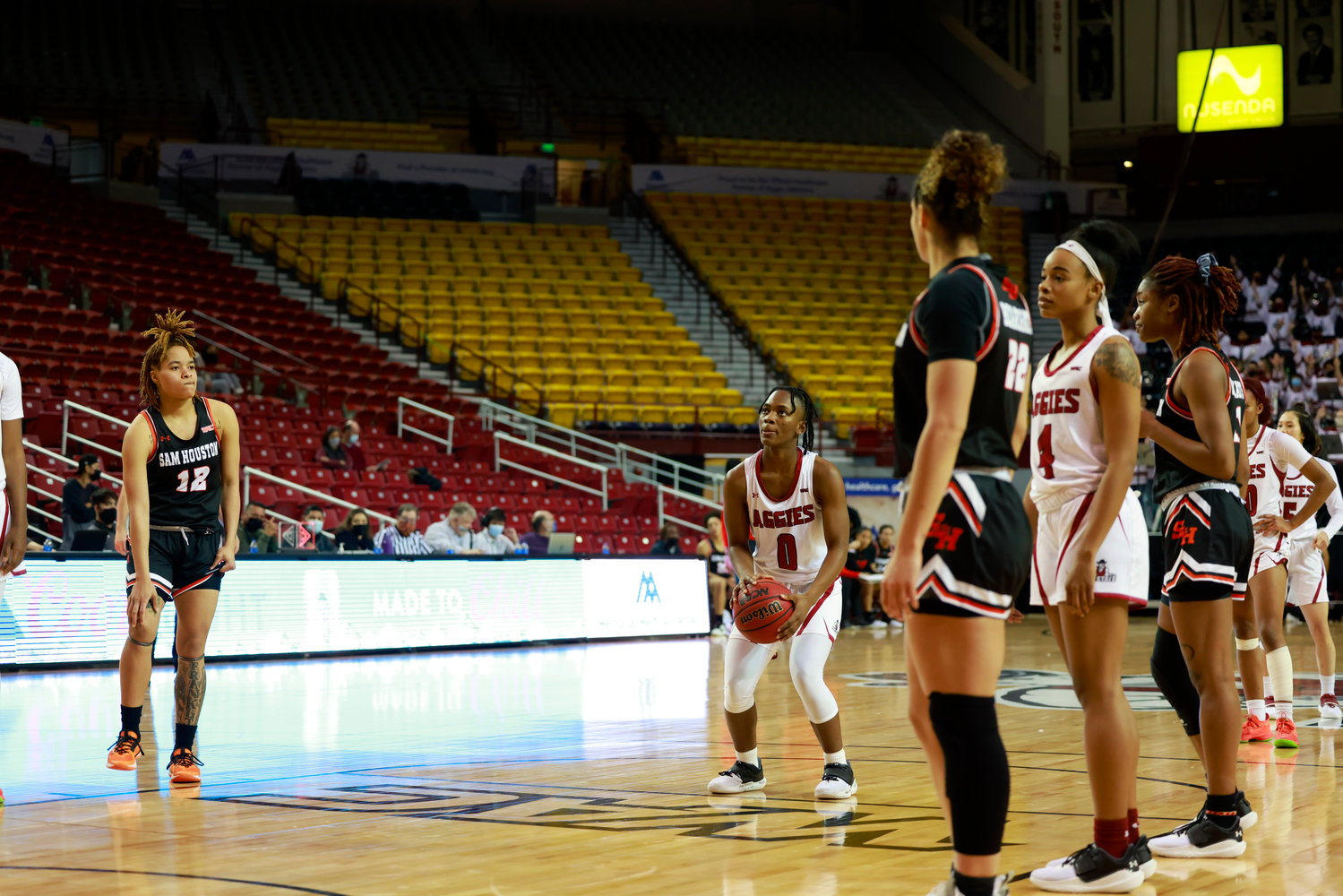 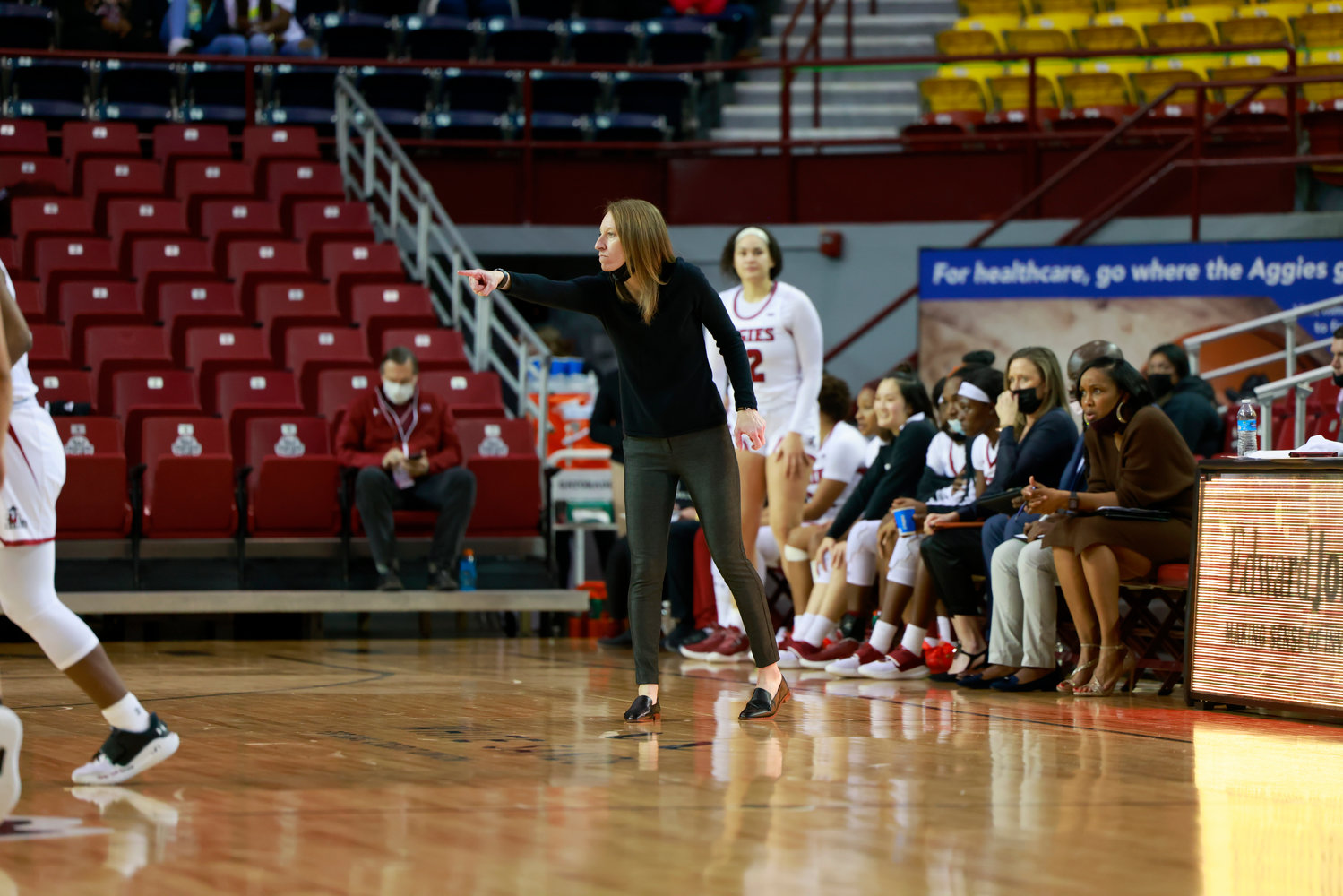 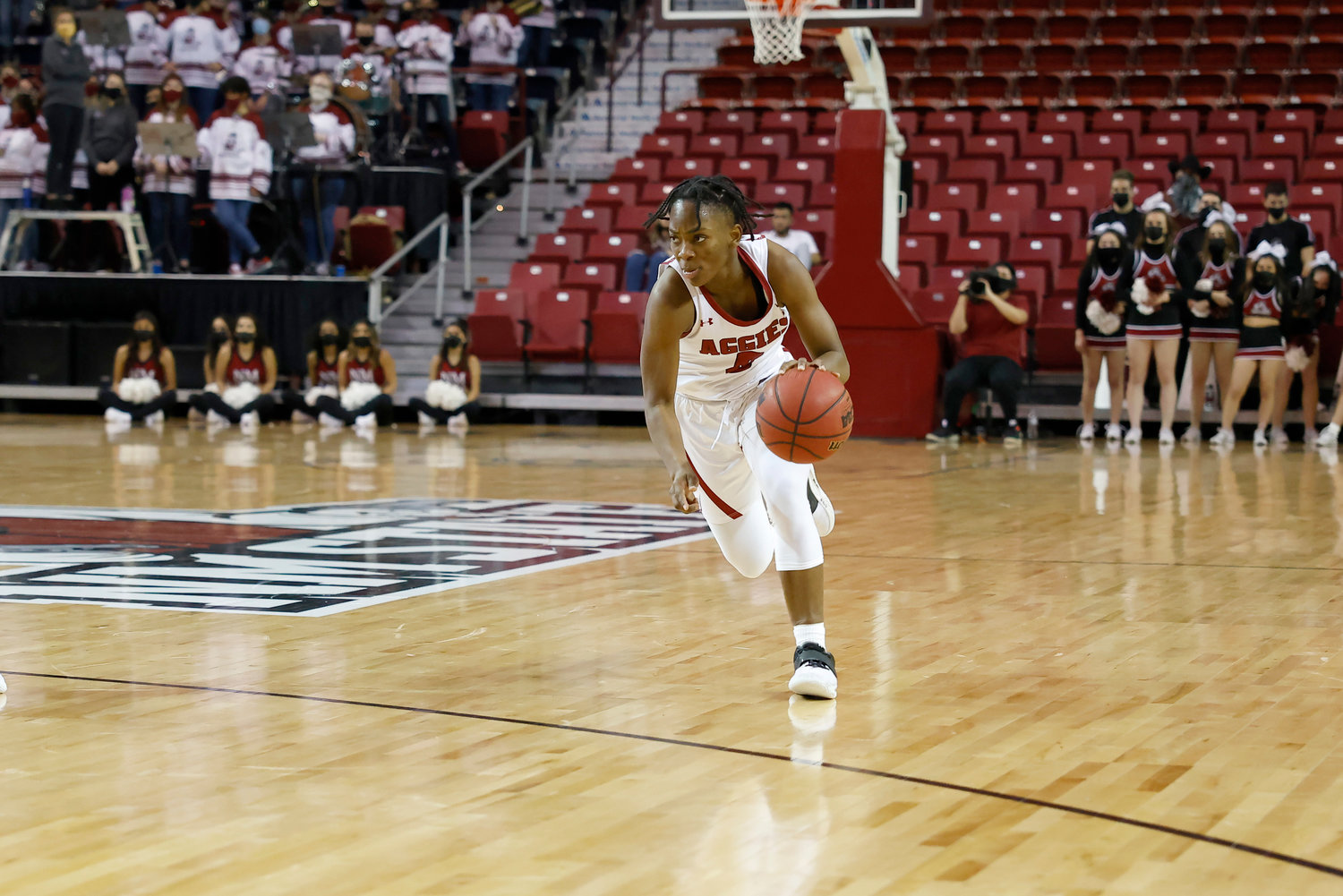 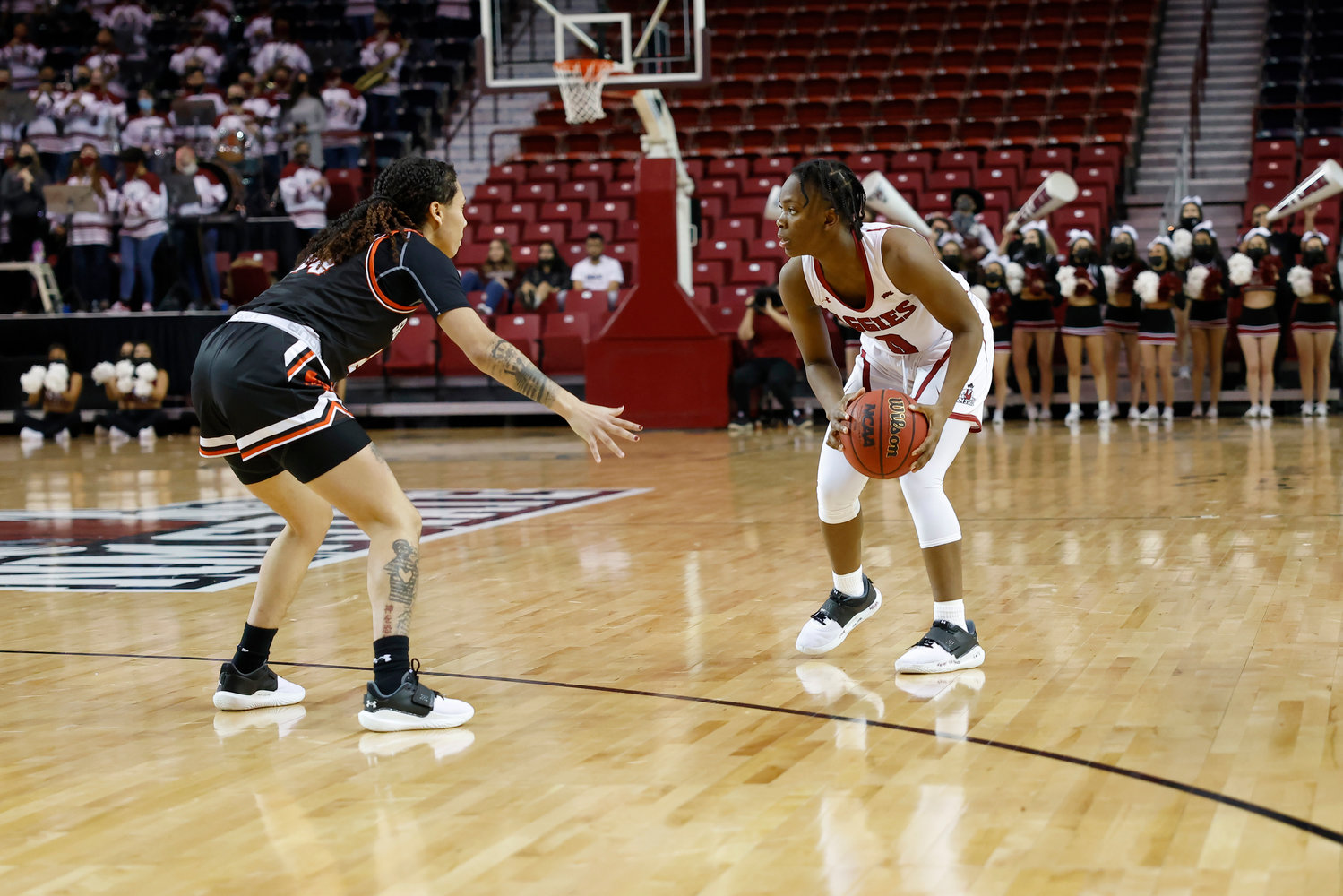 The New Mexico State University women’s basketball team is going through some growing pains and trying to learn how not to lose tight games.

At times this season, the Aggies have played well for 30, 35, even 38 minutes but fall just short.

But the NM State women came up with a huge win Jan. 20 that could just give them some much-needed confidence and a game plan for future success. The Aggies outlasted visiting Sam Houston State for a hard-fought 72-59 win. The visiting Bearkats pulled to within one in the third quarter and within 7 with about 2:45 to play.

Earlier in the season, it might have been a game that the Aggies lost but instead they were able to pull out the W.

“All too well, we have had too many close games where we had leads, let the leads slip away and lose at the end,” head coach Brooke Atkinson said. “I thought we showed some maturity down the stretch, getting stops, getting critical ‘and-one’ (free throws), critical boards and finishes.”

The Aggies are now 6-9 overall and 2-3 in the Western Athletic Conference.

They are just now starting to regain some momentum and continuity on their season after having their first four WAC games postponed because of Covid protocols. They have had seven games either postponed or canceled this year because of Covid.

Now, comes the part of the schedule where they will make up some of those games. The Aggies took a step backward when they traveled to Chicago and lost 67-64 to Chicago State Tuesday, Jan. 25 in a game that was originally scheduled for New Year’s Day. NM State was outscored 24-9 in the fourth quarter.

“Those (makeup) games will be coming and they will be coming fast,” Atkinson said. “I think we have to use this time to get more rhythm as a team offensively, defensively and just get some momentum for when those games come fast and furious.”

The “huge positive” for the team is its depth, said Atkinson, now in her fifth season as head coach.

“We have 14 kids that can play and it doesn’t really drop off,” she said.

That allows her to go to her bench when someone gets in foul trouble or is having an off-night.

They also have a selfless, next-woman-up mentality that is obvious.

“Whoever is playing, that bench is just as excited for anyone,” Atkinson said. “They really cheer for each other and support each other. You can hear it and you can see it.”

Molly Kaiser, a sophomore from Watauga, Texas, led the Aggies with 13 points in their win over Sam Houston. That night, the bench combined for 52 of the Aggies’ 72 points.

“If I’m having a bad game and somebody else is having a good game, I’m cheering them on,” Kaiser said. “Then, I might be next. We are a very selfless team. We want good for each other. We want better for each other and we push each other to be better.”

After all the postponements, the Aggies had an excellent week of practice leading up to the Sam Houston win, Kaiser said.

“You’re going to win games; you’re going to lose games,” she said. “I think we have all this talent on our team. We are still trying to figure it out, how to put it all together and find ways to win games, rather than losing them.

“It doesn’t need to be pretty,” Kaiser added. “Just continue to grind it out, stay focused and locked in.”

Next up: The Aggies are scheduled to play a road game in Phoenix against Grand Canyon University on Saturday, Jan. 29. Tipoff is 2 p.m. and the game is scheduled to be shown on ESPN+. They also have a make-up game against UT Rio Grande Valley at noon Monday, Jan. 31 at the Pan American Center.