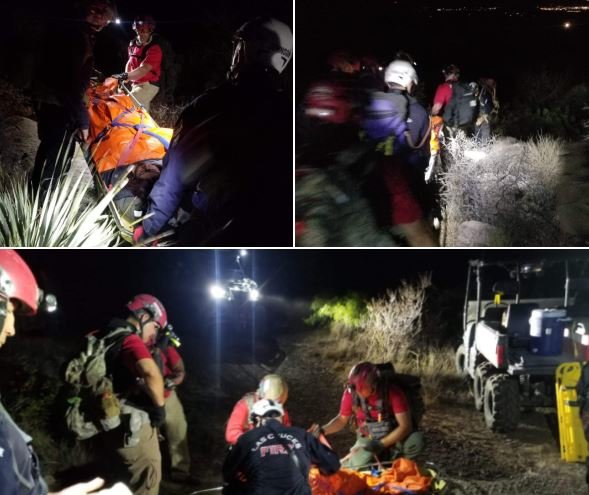 Shortly after 8 p.m. Sunday, May 16, LCFD’s Technical Rescue Team received word that a hiking group from El Paso, Texas, became separated from each other on a rather ambitious attempt to scale The Needle, one of the most difficult ascents in the Organ Mountains. The Dona Ana County Sheriff’s Office and New Mexico State Police had already been called to help locate the hikers.

Las Cruces fire learned the group of 24 hikers, ranging in ages from teenagers to adults in their mid-60s, began the guided hike to The Needle at 4 a.m. Sunday. The hikers ranged widely in age and in trail experience. During the hike, several members of the group fell behind into smaller groups. Some of the smaller groups then splintered onto different trails and subsequently became disoriented. The hikers became stranded once the sun set and they were unable to find their way off the mountain. Hikers made several calls to 911 prompting the search and rescue mission.

The Bureau of Land Management allowed rescuers to take one utility terrain vehicle onto national monument land through the Modoc Trail. A DASO deputy located the injured woman along the trail when the UTV, with three LCFD paramedics and one MVSAR volunteer, arrived. The 47-year-old woman was injured and unable to move further on her own. She was carried off the mountain in a Stokes basket and transported to Memorial Medical Center at about 4 a.m., or nearly 24 hours after the group started their hike. Her injuries are not life-threatening.

Other search and rescue members located the remaining hikers, at various stages of descent, along the La Cueva trail. Those hikers were escorted to the La Cueva trailhead. Several hikers had relatively minor injuries, mostly scrapes and bruises, and some complained of dehydration.

LCFD’s Technical Rescue Team and the Mesilla Valley Search and Rescue Team train together several times throughout the year and use their expertise on mountain rescues often. So far in 2021, the two teams have worked together on no less than three missions in the Organ Mountains.

LCFD suggests following these and other safety tips: