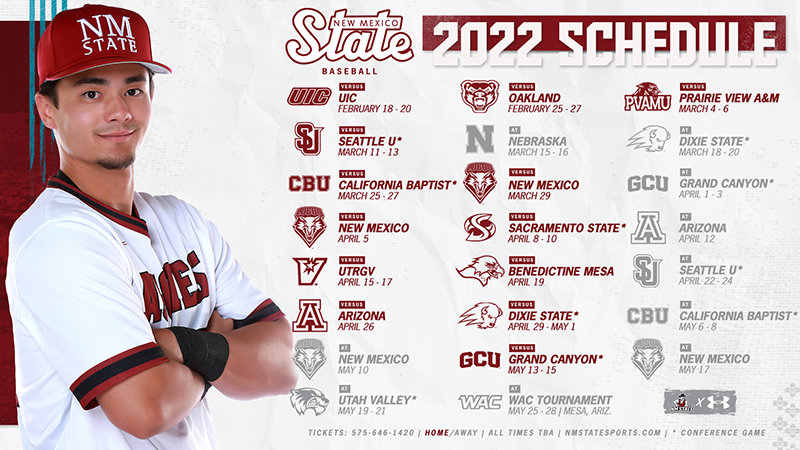 Fans hoping to catch NM State baseball at Presley Askew field in 2022 will have the opportunity to do so more often than not.

The Aggies' home-heavy 2022 slate features 31 contests within the confines of Presley Askew Field in Las Cruces in addition to 20 tilts on the road. All but four of the Aggies' home games will be featured as part of three-day weekend series (Friday-Sunday) and each of the team's first 12 games will take place at The 'Skew beginning with three consecutive non-conference series.

Illinois-Chicago (Feb. 18-20), Oakland (Feb. 25-27) and Prairie View A&M (March 4-6) will all make trips to Las Cruces and will make up nine of the 18 non-conference battles the Aggies have on their 2022 slate. NM State caps off a stretch of four consecutive home series to start the season by hosting Seattle U (March 11-13) to begin Western Athletic Conference (WAC) action.

A two-game midweek set at Nebraska (March 15-16) precedes NM State's first WAC road series of the season at Dixie State (March 18-20). Following that five-game road swing - the team's lengthiest stretch of true road games on the season - the Aggies return to The Land of Enchantment for a home series with California Baptist (March 25-27) as well as the first of four matchups against in-state rival New Mexico (March 29).

Eleven of NM State's 19 games in the month of April will occur at The 'Skew, but that month begins with a three-game WAC set at Grand Canton (April 1-3). Another home matchup against New Mexico (April 5) takes place prior to a three-game WAC home series with Sacramento State (April 8-10). The Aggies' second battle with the Lobos represents the starting point of a stretch where eight of the team's nine games will be played at home. The only road game in that span is a midweek contest at Pac-12 foe Arizona (April 12).

Upon returning from Tucson, NM State hosts UTRGV (April 15-17) for a three-game WAC series and closes out a run of four consecutive home games with a non-conference tilt against Benedictine Mesa (April 19). Following a WAC series at Seattle U (April 22-24), NM State returns home to close out the month and hosts Arizona (April 26) in midweek action. NM State's penultimate WAC home series of the year follows that weekend as the Aggies welcome Dixie State to The 'Skew from April 29-May 1.

May is the month where the Aggies will be on the road the most as eight of the team's 12 games will take place away from Las Cruces. That includes a four-game stretch at California Baptist (May 6-8) as well as the first matchup between NM State and New Mexico in Albuquerque, N.M. (May 10). For the Aggies' final home series of the season, they host Grand Canyon (May 13-15) before closing out the regular season with another single game at New Mexico (May 17) as well as a WAC series at Utah Valley (May 19-21).

Should the Aggies make the cut for the 2022 WAC Tournament, they'll head to Mesa, Ariz., to take part in the league's postseason fracas from May 25-28.