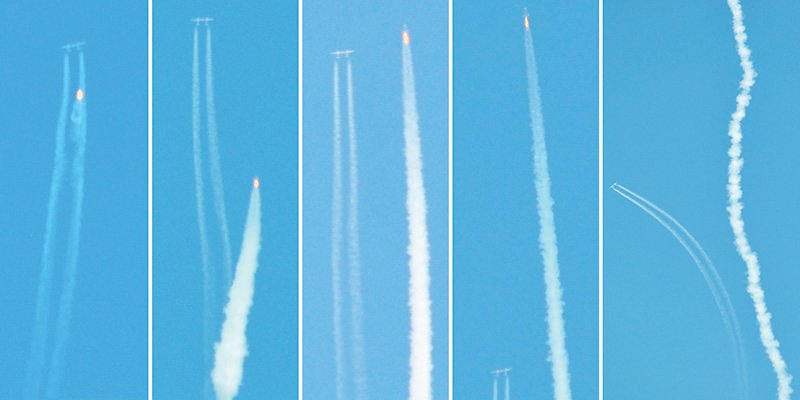 The speakers at Spaceport America blurt out “release, release, release!” as VSS Unity is released from VMS Eve and takes off into space leaving the mothership behind.
Photos by Lanze Hibler 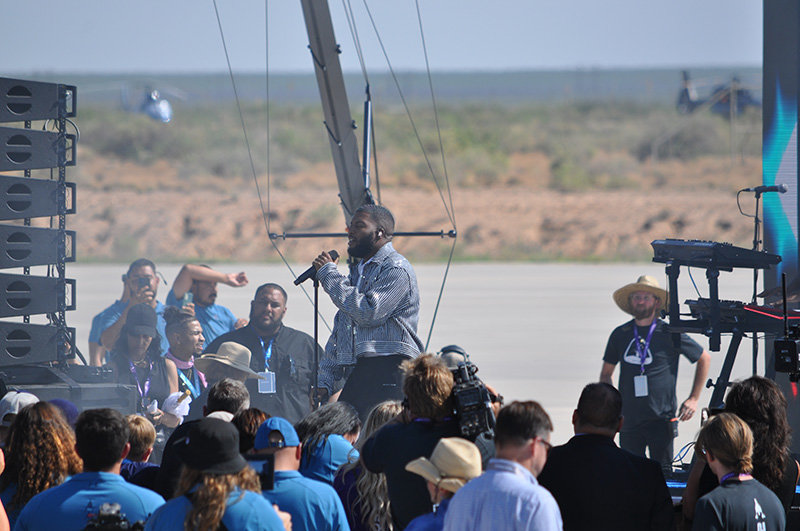 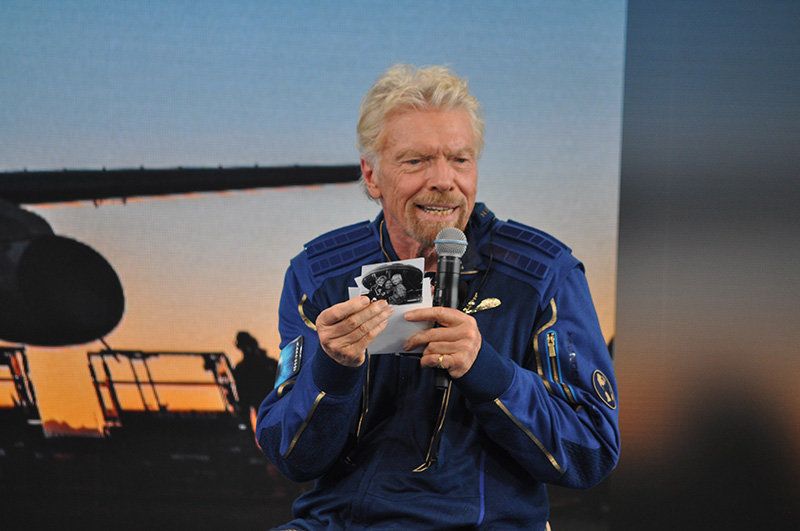 Sir Richard Branson shows photos that he carried to space with him on the Unity 22 flight. This one has his mother and himself as a child.
Photo by Lanze Hibler 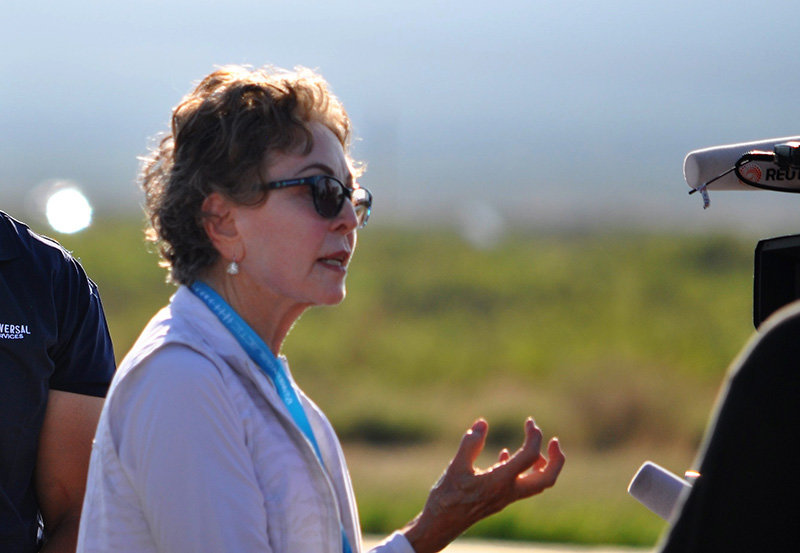 New Mexico State University professor and future astronaut Pat Hynes speaks about her dream of using space flight to experiment on behalf of the future of humanity.
Photo by Lanze Hibler 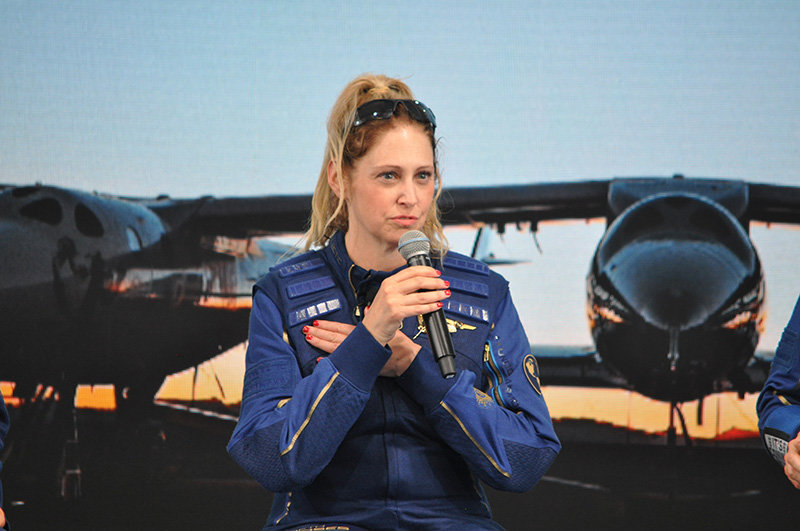 Astronaut Beth Moses talks about her experience on the Unity 22 flight. She said she carried flowers with her into space for the connection to earth.
Photo by Lanze Hibler 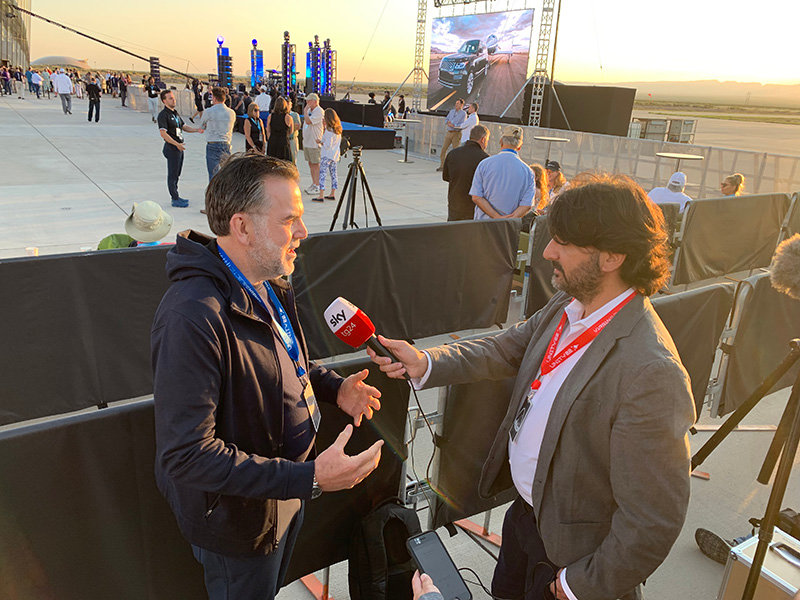 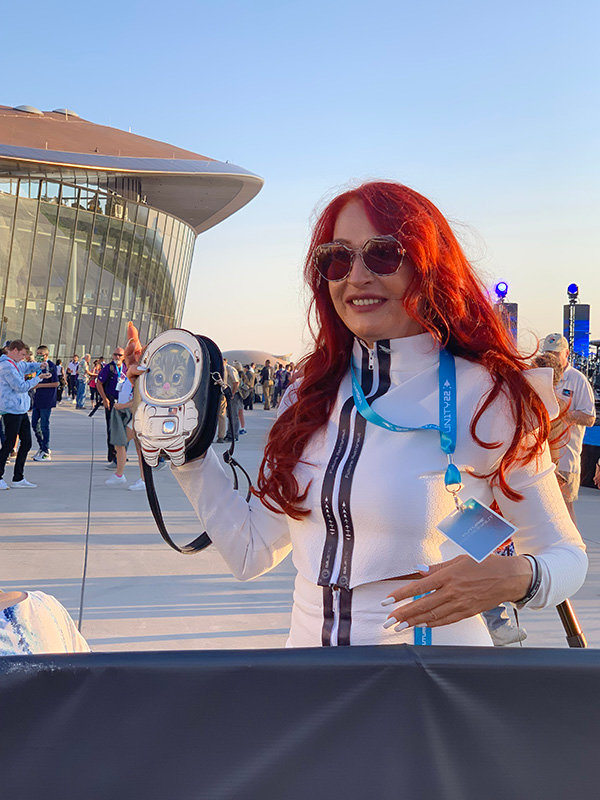 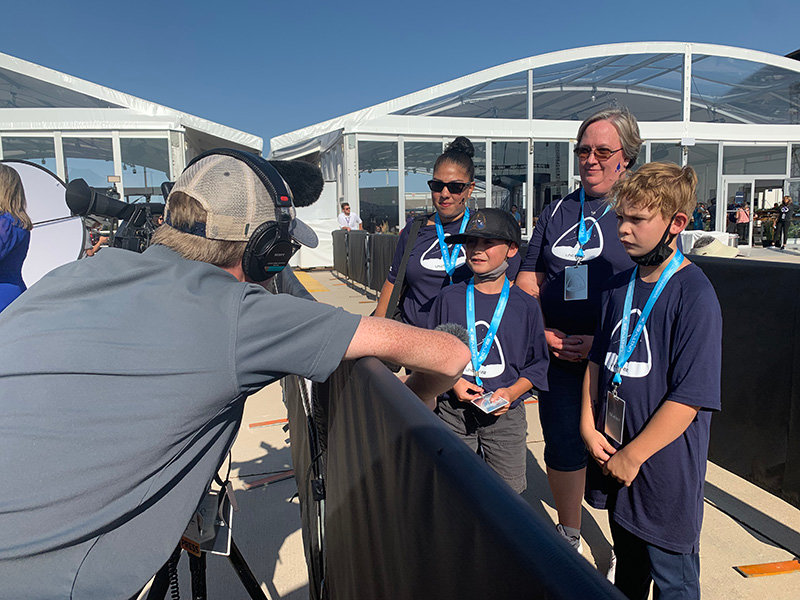 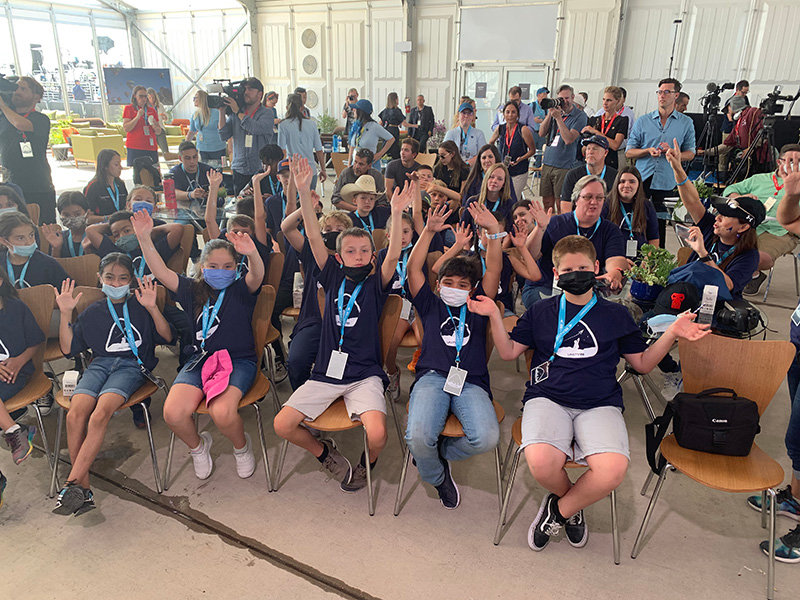 From the beginning, 17 years ago when then New Mexico Gov. Bill Richardson and Virgin Galactic’s Sir Richard Branson shook hands over a piece of desert in southern New Mexico, everything has led to the historic day of Sunday, July 11, 2021. The Unity 22 flight into space  kicked off the future of space travel.

“It’s a beautiful day for New Mexico,” said former economic development secretary and one of the original conceptualists of the spaceport, Rick Homans, who served in the Richardson administration.  “This is the day we have all been working for since 2005 when Governor Richardson announced this great partnership.”

Homans said the Unity 22 flight is a milestone for the commercial spaceflight industry and space tourism but it is just the beginning.

“The goal is to live, work and play in space,” he said. “We have seen the industrial revolution and what we are experiencing now is really the beginning of the space revolution. It’s a pretty hot market right now, and New Mexico is in the right time at the right place.”

The facility, Homans said, cost $250 million with a lot of expense going into the 12,000-foot-long runway and the iconic Gateway to Space building and it couldn’t have been done without the taxpayers of New Mexico, specifically Doña Ana and Sierra counties.

“The thing I would say to the taxpayers is thank you,” he said. “Thank you for the confidence. Passing the tax was the key to moving it forward. They benefitted with money going into education programs through the years, but the big thing now is the money going into the jobs and the spaceflight industry. That’s really when the payoff will come.”

The 700 to 800 people gathered at Spaceport America last Sunday, including not only press from across the world but also many of the “future astronauts,” holders of the $250,000 tickets to space purchased from Virgin Galactic. And on the VIP side of the event, Branson’s family awaited his return from space along with family members of the others flying on the spaceship Unity.

Elon Musk, who is Branson’s friend and owner of another commercial space flight company, SpaceX, was also present at the historic event. SpaceX launches from Florida, while a third company, Blue Origin, launches from west Texas near Van Horn, about two hours east of El Paso.

A group of Las Cruces Public Schools students from Monte Vista Elementary School also attended the event, adding a youthful example of those childhood dreams of going to space.

Russian born Lina Boroczina was one of the first to sign up for a ticket to space. She’s an example of Branson’s dream of making space accessible to everyone. Sixteen and a half years ago, she mortgaged her house to buy her ticket and has no regrets.

“I am a future astronaut, one of the founders,” she said. “In 17 years of waiting, I am actually here to witness Sir Richard go up. It’s a dream of a lifetime.

“When I was 5 years old, my dad used to tuck me in bed and tell me stories about being stowed away in a spaceship with my cousin,” Boroczina added. “Stories that we used to go in space and come out in zero gravity and have space adventures with all kinds of space aliens and then we would land and grandma would be standing on the landing with her rolling pin and we would get grounded for like sneaking out on the space adventure. Every night, it was a different story.”

Boroczina identified herself as a huge sci-fi nerd and a scientist.

“You cannot imagine how happy I am to be here,” she said. “I cannot find words for it. The future is now. It is worth every penny -- every single penny.”

Spaceport Director Scott McLaughlin said the event is important for the region, a milestone for New Mexico.

He called himself is a “boomerang,” a third-generation New Mexican who left because there was little work in his industry of engineering and aerospace and then returned 25 years later.

“New Mexico invests in college grads and then they leave,” he said. “Space involves virtually every technology we work on. I would like to grow the economy where people don’t just decide to leave after they graduate.”

New Mexico Gov. Michele Lujan Grisham was there too, of course. She was touting the value of the event, and space tourism in general, to the state’s economy.

“Our world has evolved in the space industry over time,” she said. “This is a continuation of work we have been doing for many years.”

Hynes is the curator of the International Symposium for Personal and Commercial Spaceflight held every year in Las Cruces. She is a strong proponent of the research component of taking humans to space and has been the developer of many experiments that have already taken place out of Spaceport America.

“There are many things we are learning by studying things in zero gravity,” she said.

Because government changes in administration and funding is not an issue in the private space industry, she hopes that experimentation in space will have a continuity it has never seen before.

“Now you see it: We have research capacity,” she said. “Commercial is so important because it is not dependent on government. Private industry has to do this.”

It was at the press conference as the entire event was wrapping up that Branson said directly to the school children, “If we can do this, just imagine what you can do.”

“It’s impossible to describe,” he said, clearly still high from the experience. “The views as you go into space – we are so lucky to have this planet that we all live on. At Virgin Galactic, we must all be doing everything we can to help this incredible planet we live on. I will devote the rest of my life to doing that.”