Myth comes together with science in largest constellation 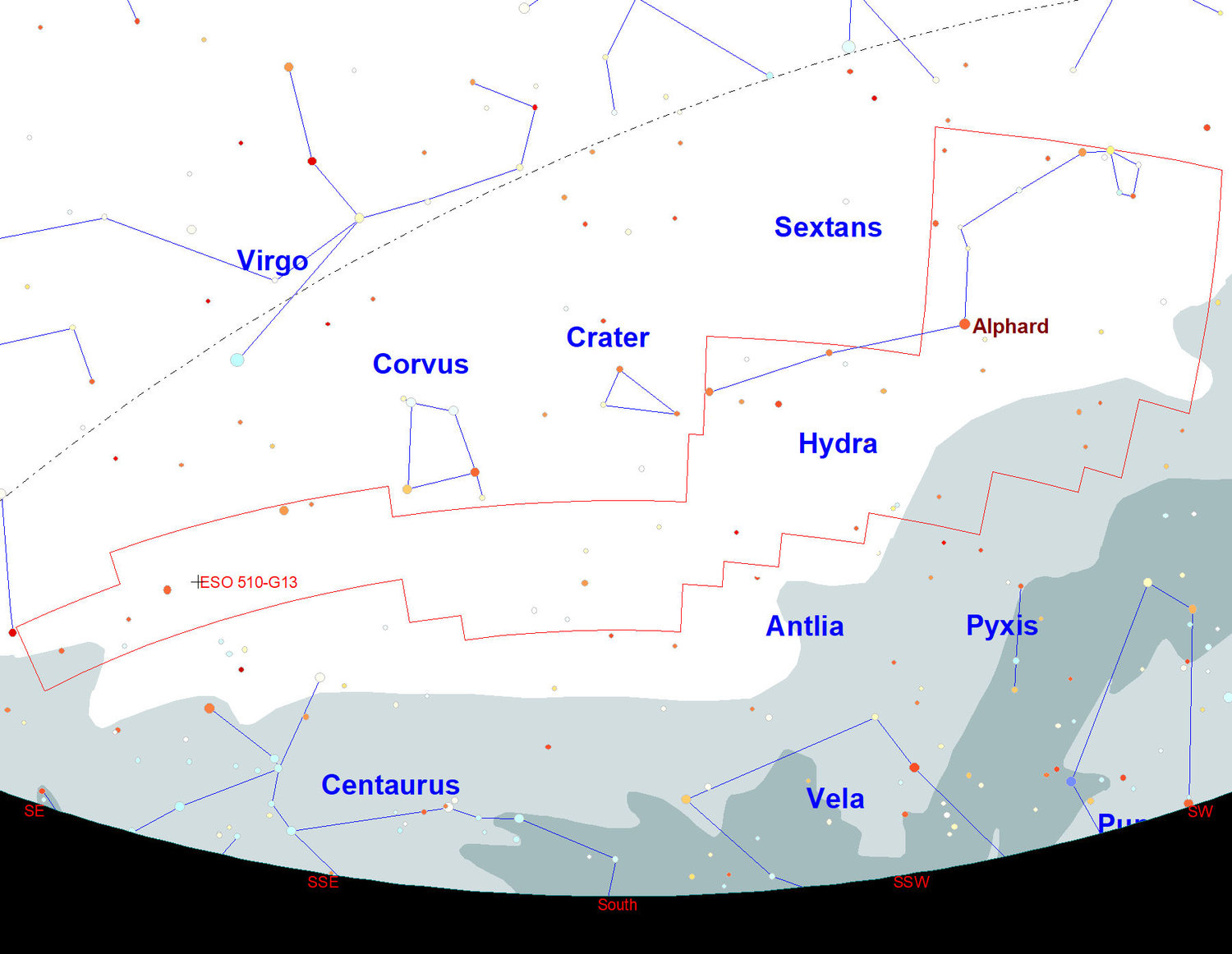 The largest constellation in the sky is Hydra, the water snake. This constellation winds its way from a circlet at the northwestern end representing the head of the snake. The other two constellations in the myth, Corvus, the Crow and Crater, the Cup, are above the back of Hydra. Most of the stars in this constellation are faint, except for second magnitude Alphard. Even with the large size of this constellation, there are only three Messier objects, M83, the Southern Pinwheel Galaxy, the globular cluster M68, and the open cluster M48.
Posted Saturday, May 1, 2021 3:52 pm
Calendar of Events – May 2021 (MDT)

A long, jagged, region ranging across our southern sky represents the water snake, Hydra. This constellation snakes southeastward from a small circlet of stars two-thirds of the way up in the west-southwestern sky all the way to the east-southeastern horizon. It is the largest constellation in the sky, covering 1303 square degrees. This constellation is mostly south of the celestial equator, but the circlet is north of the equator.

The Water Snake is one of the 48 constellations listed by the second-century astronomer Ptolemy in his “Almagest.”

Hydra is part of the myth of the king of the gods, Apollo, and his crow servant. Apollo was sitting on his throne in Olympus and asked the crow (the constellation Corvus) to take a cup (the constellation Crater) down to Earth and fetch him a drink of water. The crow flew down to a spring and filled the cup with water. As he started to fly back, he saw a fig tree with unripped fruit and settled down to wait for them to ripen.

When they were finally ripe, the crow gorged himself on the figs and fell asleep. When he finally woke, he realized Apollo would be furious with him. He grabbed a nearby water snake (Hydra) and flew back to Olympus. There he told Apollo that the water snake had prevented him from retrieving the water. Apollo was not fooled and, in a rage, he cast the cup, snake and crow into the starry sky. His final punishment was to place the cup with the water just out of reach of the thirsty crow.

The brightest star in Hydra is Alphard (Alpha Hydrae). At magnitude +2.0, this star’s name means “The Solitary One,” all alone in the south-center of Hydra. It is only 177 light-years away, an orange giant star approaching the end of its fusion-energy generating days. The only other named star in this constellation is Minchir (Sigma Hydrae) which is a dim magnitude +4.5. It is the southwest star in the circlet of the Water Snake’s head.

Among the 157 bright galaxies in Hydra is the unusual galaxy ESO 510-G13.This magnitude +13.4 galaxy is located near the far southeastern end of the constellation. This edge-on spiral galaxy is about 150 million miles away from us. With most edge-on spiral galaxies, the outer bands of dust and gas would appear flat like a phonograph record. ESO 510-G13’s outer bands appear like a warped record.

The ESO has constructed three observatory sites in the southern hemisphere. Their first telescope was a 40-inch diameter built in the calm, dry, clear skies of the Atacama Desert in Chile in 1972. This telescope performed a number of surveys, including a galaxy survey that first noted the distorted disc of ESO 510-G13 as part of the ESO/Uppsala Survey of the ESO(B) Atlas.

This galaxy has a ring of dust around the outer edge of the disc clearly visible as a dark band across the face of the galaxy. A second dust lane is tilted around 8 degrees to the disc. In addition, the body of the galaxy has an unusual number of stars above and below the disc, giving this galaxy a “boxy structure.”

This galaxy’s warped disc and boxy structure is probably the result of a recent merger with another, smaller galaxy. The gravity of the smaller galaxy distorted the dust lanes in the larger one. Stars from the smaller galaxy have not settled into the disc, forming the boxy structure above and below the disc. The cores of the two galaxies are moving toward each other and will eventually merge to form a single core. Over time, this galaxy will settle down and resume being a normal spiral galaxy.

May evenings host three planets this year. Venus has appeared out from the Sun’s glare after passing around the far side of the Sun for the last few months. At midmonth, Venus will be 97 percent illuminated with a disc 10.0 seconds-of-arc across, shining at magnitude -3.9. It is barely 5 degrees above the west-northwestern horizon as it gets dark, setting by 9 p.m. During the month, “The Goddess of Love” moves from eastern Aries to eastern Taurus.

Mercury is 9 degrees above Venus, shining at magnitude +0.4. The “Messenger of the Gods” moves eastward from western Taurus to eastern Taurus where it turns back toward the Sun after reaching greatest distance from the Sun on May 16. Mercury’s disc is 8.0 seconds-of-arc across and it is 37 percent illuminated. It is 14 degrees above the west-northwestern horizon as it gets dark and sets by 9:45 p.m. Venus will pass less than half a degree north of Mercury on May 29.

Twenty-six degrees above Mercury, the Red Planet moves eastward from western to eastern Gemini, glowing at magnitude +1.7. The “God of War’s” disc continues to shrink as the planet becomes more distant, now 4.3 seconds-of-arc across. As darkness falls, Mars is 36 degrees above the western horizon setting around 11:30 p.m.

Next to enter our sky is Saturn, rising around 1:15 a.m. It starts the month moving eastward in central Capricornus, coming to a halt on May 23 and turning back westward. The Ringed Planet is 38  degrees above the south-southeastern horizon as dawn breaks. At midmonth, Saturn’s disc is 17.1 seconds-of-arc across, while the Rings are 38.7 seconds-of-arc across, tilted down 16.8 degrees with the northern face showing.

Jupiter continues to pull away from Saturn. It is 36 degrees above the southeastern horizon as it begins to get light after rising at 2 a.m. Shining at magnitude -2.4, the “King of the Gods” disc is 39.1 seconds-of-arc across. It is moving slowly eastward in western Aquarius.

On the morning of May 26, the Moon passes through the Earth’s shadow in a total lunar eclipse. Total lunar eclipses can occur only at a full moon, which will be dimmed by the shadow. The dimming will already be evident when the Moon’s southeast corner enters the full shadow at 3:45 a.m. The entire Moon will be in the shadow by 5:11 a.m. Maximum eclipse is at 5:19 a.m. and the Moon starts to slip out of the Earth’s shadow at 5:25 a.m., providing a brief 14 1/2 minutes of totality. The Moon will set around 6:10 a.m., still working its way out of the shadow. Enjoy the eclipse and "keep watching the sky"!