Source of the cornucopia lives in the stars 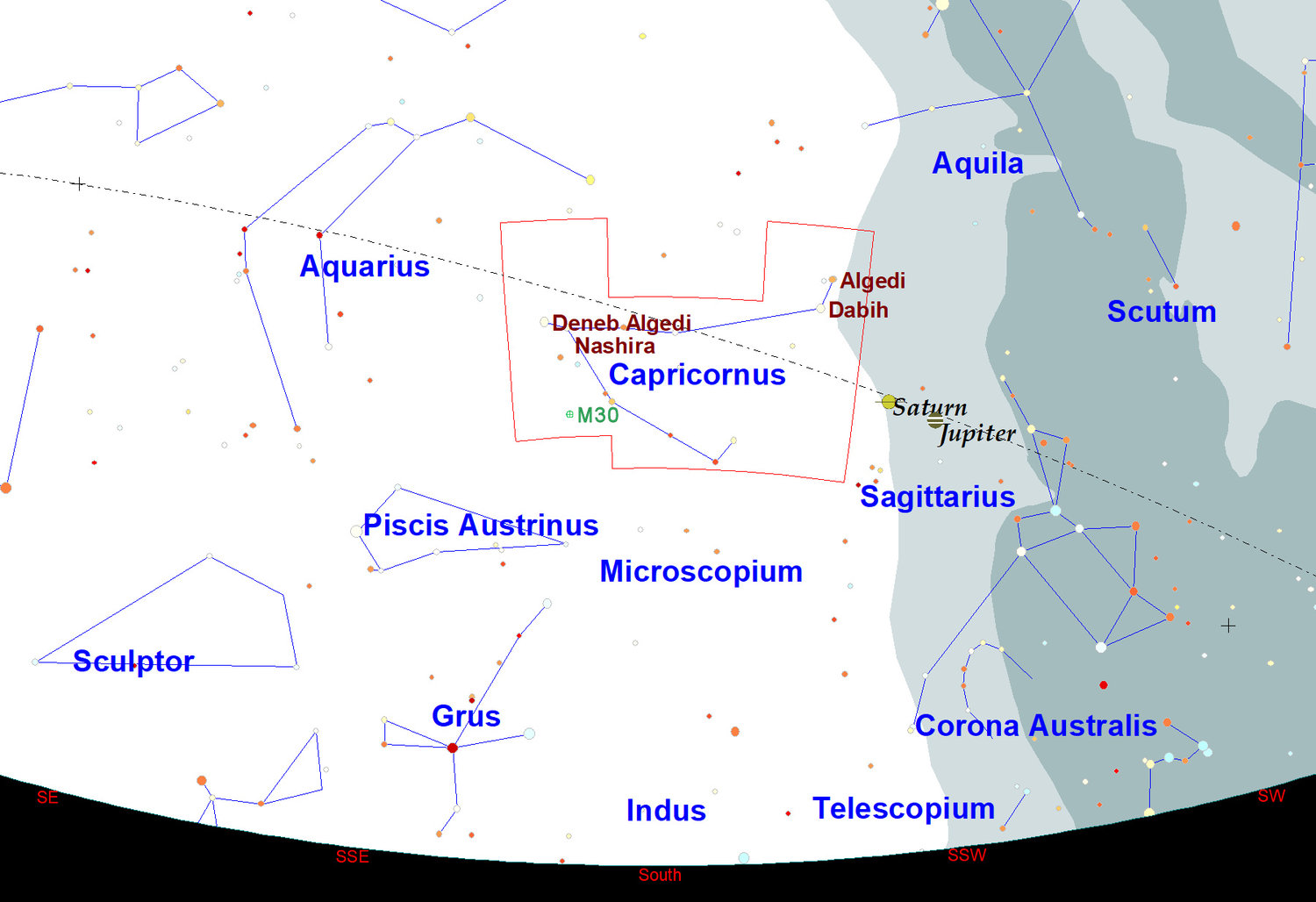 Capricornus is a medium sized constellation about halfway up in our southern sky. This constellation represents a sea-goat and is composed of third and fourth magnitude stars in a crocked "V" shape lying on its side. It is just off the Milky Way, so we can get a view of object outside of the plane of our galaxy like the globular cluster M30. Globular clusters belong to our galaxy, but they do not stay in the Milky Way's disc.
Posted Monday, November 2, 2020 10:31 pm
Calendar of Events – November 2020 (MST)

Halfway up in our southern sky is a half-goat, half fish named Capricornus. This constellation is composed of third and fourth magnitude stars in a crooked “V” lying on its side, with the point facing east. Capricornus is depicted as a goat body, but instead of rear legs, the body merges into a fish tail. This sea-goat is the 40th largest constellation at 414 square degrees.

In Greek mythology, Capricornus was thought to be the goat Amalthea (the Nourishing Goddess), that suckled the baby Zeus after he was saved by his mother, Rhea, from being devoured by his father Cronos. The cornucopia, or the “horn of plenty” is Amalthea’s broken horn, ripped off as she played with the powerful Zeus. He then used his powers to transform it into the horn of unending nourishment.

The brightest star in this constellation is not the Alpha star, but the Delta star. Delta Capricorni is a white giant star of spectral type A7, twice the mass of our Sun and almost twice its diameter. At magnitude +2.8, this star is not a solitary one, it has a close companion in orbit around it. The companion completes an orbit in just over a day.

The companion (Delta Capricorni B) is around two-thirds the Sun’s mass and almost its diameter. Its orbit brings it in front of the primary from our point of view. This provides an eclipse almost every day. When the secondary star crosses the front of the primary, the magnitude of the combined star system drops by 0.24 magnitudes. The repeating eclipses make Delta Capricorni an eclipsing binary star.

M30 is magnitude +7.7, visible in a good pair of binoculars. It was discovered by French astronomer Charles Messier in 1764. It is about 12 minutes-of-arc across which corresponds to a diameter of 93 light-years. The stars in this tiny area represent a mass of about 160,000 suns. It is orbiting backward from most globular clusters, so it was probably stolen from a satellite galaxy rather than being formed as part of the Milky Way.

M30 is said to have undergone a core collapse. The binary stars in the young core encounter neighboring very massive stars, causing the binary to be torn apart and the companion star to be thrown toward the edge of the cluster, stealing some of the speed from the remaining two stars in this encounter. These stars left in the core now move more slowly, allowing them to be closer together. This results in a continuing increase in the density of stars all the way to the core.

The Planets for November 2020

Saturn and Jupiter are still together in far eastern Sagittarius about four degrees apart. Both are moving slowly eastward, with the faster Jupiter starting to close in on Saturn. They are 33 degrees above the south-southwestern horizon as it gets dark. Jupiter sets a little after 10 p.m. with Saturn following 20 minutes later. Jupiter’s disc is 35.5 seconds-of-arc across at midmonth and it shines at magnitude -2.1. At the same time, Saturn’s rings are 36.0 seconds-of-arc across and they are tilted down 22.3 degrees with the northern face showing. The Ringed Planet’s disc is 15.9 seconds-of-arc across, glowing at magnitude +0.6.

Shining at magnitude -1.1 like a ruby in the eastern sky, Mars is already 30 degrees above the eastern horizon as it gets dark. It starts the month moving westward in south-central Pisces. At midmonth it turns around and heads eastward resulting very little motion this month. The God of War’s disc is 14.4 seconds-of-arc across and it sets around 3:45 a.m.

The morning sky is graced by both Venus and Mercury. Brilliant Venus is moving eastward from western Virgo across the constellation, entering western Libra as the month ends. The Goddess of Love glows at magnitude -4.0 with a disc that is 12.3 seconds-of-arc across and it is 84 percent illuminated. It rises at 5:10 a.m. and is 23 degrees above the east-southeastern horizon as it gets light.

Mercury erupts from the morning twilight at the beginning of the month, reaching its greatest distance from the Sun on Nov. 10. On that date, it will be almost 12 degrees above the east-southeastern horizon after rising at 6 a.m. The Messenger of the Gods will have a disc 6.8 seconds-of-arc across which will be fifty-eight percent illuminated. The magnitude -0.5 planet will travel eastward from western Virgo through most of this constellation and into western Libra for the last two days of the month.

Comet Temple-Tuttle’s orbit comes near the Earth on Nov. 17. Tiny dust particles from the comet spread along the comet’s orbit will enter the Earth’s atmosphere and burn up as meteors. Due to the motion of the particles in the comet’s orbit and the motion of the Earth, these meteors appear to radiate from the constellation Leo, giving the meteor shower the name the Leonids. The largest Leonids are less than half an inch across with a mass of two hundredths of an ounce, generating a meteor that shines at magnitude -1.5. So, in the early morning, park your chaise lounge facing southeast at a dark site, throw on a blanket and watch about 15 of these meteors per hour streak through the night and "keep watching the sky"!