A familiar tale ends with beezwax 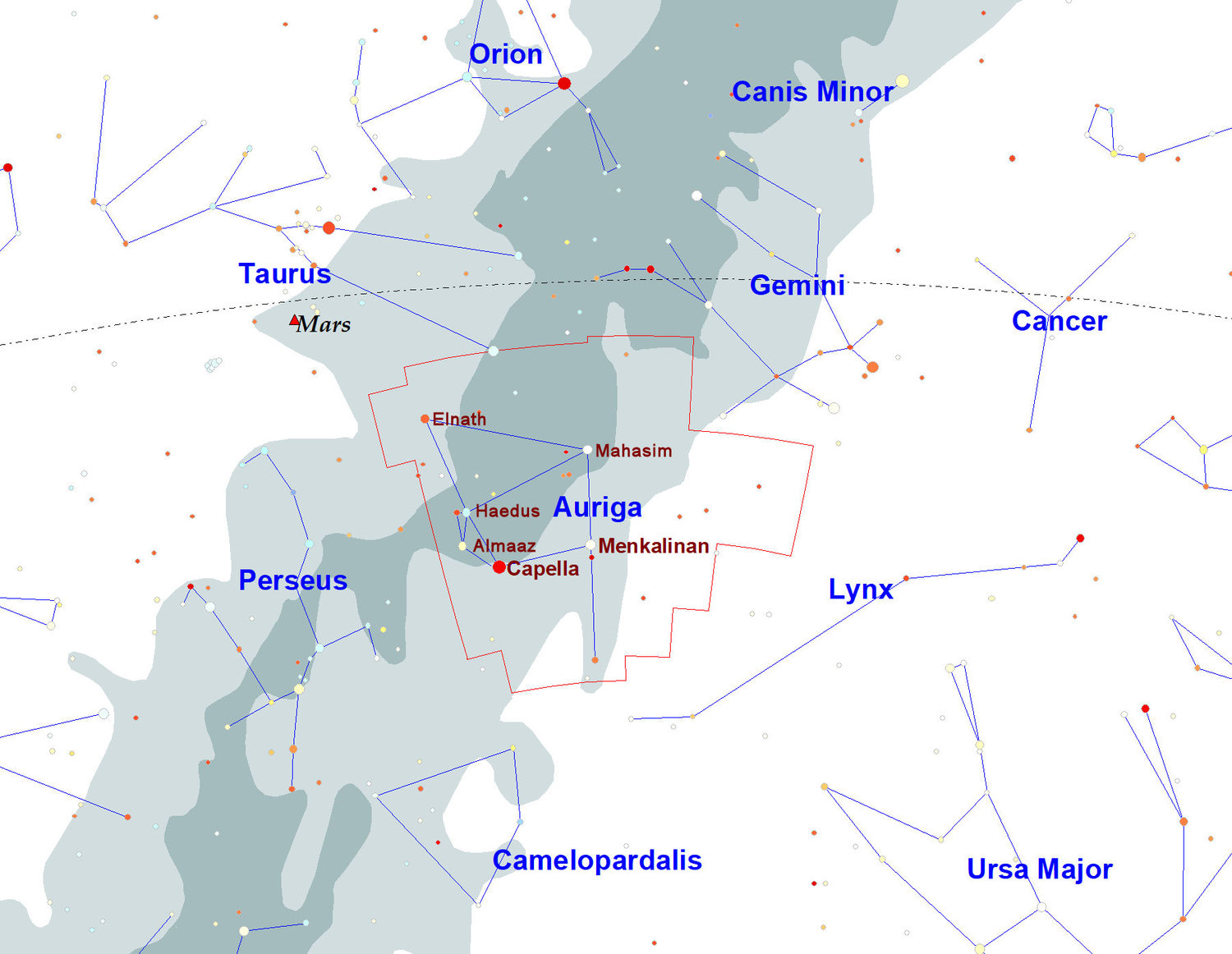 Auriga Is high in the northern sky on these March evenings. It is composed of brighter stars, with the first magnitude Capella being the brightest. While Capella was the brightest star as well as being a quadruple star, many of the other stars in Auriga have interesting stories to tell as well. See previous editions of Desert Exposure for information on some of the other stars in Auriga.
Posted Monday, March 1, 2021 2:21 pm
Calendar of Events – March 2021 (MST/MDT)

047:00 p.m.Mercury one-third degree above and to the left of Jupiter.

261 a.m.Venus passes around the other side of the Sun

Just a little north of overhead, the constellation Auriga, the Charioteer, races through our evening sky, circling the north celestial pole daily. Auriga has a bright marker at the northwest end of the constellation, the first magnitude star Capella. This makes Auriga easy to find in the sky.

Auriga was first described in Mesopotamian myths as a scimitar or a crook (staff). The crook represented a goat-herder or shepherd. Greek myths are plentiful for this constellation. One of them involved King Oenomaus of Pisa and his beautiful daughter Hippodamia. King Oenomaus had received a prophecy that he would be killed by this son-in-law. He devised a plan to prevent his daughter’s marriage by forcing each suitor to participate in a chariot race.

King Oenomaus and his expert charioteer Myrtilus would race the suitor and when the King won the race, the suitor would be killed. Eighteen suitors had met their fate this way and their heads were mounted on wooden columns in the palace. The next suitor was Pelops, son of Tantalus, the King of Lydia. Pelops was very much in love with Hippodamia and fearing he would lose the race, he asked his friend Poseidon, god of the seas, for help. Poseidon produced a chariot drawn by winged horses.

Still concerned, Pelops and Hippodamia replaced the bronze linchpins holding the wheels on the King’s chariot with ones made of beeswax. The chariots lined up at the starting line and the race was off. Pelops took an early lead, but the long race allowed Myrtilus and the King to catch up with him. Just as King Oenomaus was about to pull even with Pelops, the beeswax melted, and the wheels came off the king’s chariot and it broke apart. King Oenomaus was dragged by his own horses to his death, while Myrtilus survived. Myrtilus attempted to claim Hippodamia himself, but Pelops tossed him off a cliff ending his life. Myrtilus's father Hermes had him placed in the sky as Auriga. Later, the Olympic Games were created to commemorate King Oenomaus.

Capella is a multi-star system with the brightest visible star designated Capella A. Capella A itself is actually a pair of stars that orbit each other a little closer than the Earth is to the Sun, so close that they appear to be a single star in our sky. These two elder stars are each two and a half times the mass of our Sun. The brighter of these two stars (Capella Aa – magnitude +0.76) is almost twelve times the diameter of the Sun, while the fainter one (Capella Ab – magnitude +0.91) is almost nine times the Sun’s diameter. The larger star has expanded so much that its surface has cooled to a red spectral class of K0 while the smaller star’s surface has only cooled to a yellow spectral class of G3. These stars are around six hundred and 20-million years old.

There are 15 additional stars that appear near Capella A in our sky. Each has been assigned a letter to distinguish them from each other. Most of them are much farther away from us and so are not part of the Capella star system. Two of them are the same distance as Capella A and are moving in the same direction. These two are Capella H and Capella L.

Capella H and L are tiny red dwarf stars. Capella H is a red spectral class of M2.5 while Capella L is a redder M4. Both are about half the mass of the Sun. These two are just 3.5 seconds-of-arc apart in the sky, located about ten thousand times the distance from the Earth to the Sun from Capella A.

If you wanted to build a model of this system, American astronomer Robert Burnham Jr. calculated that Capella A would be two spheres thirteen and seven inches across, separated by ten feet. Capella H and L would each be 0.7 inches across and separated by four hundred and twenty feet. Keeping to scale, the two pairs would be 21 miles apart.

Venus is still too near the Sun to be seen this month, but Mars is 63 degrees above the southwestern horizon as it gets dark, setting around 1 a.m. This month it moves from western Taurus to north-central Taurus. The God of War shines at magnitude +1.1 with a disc that is 5.8 seconds-of-arc across.

Saturn is moving slowly eastward in central Capricornus this month. It rises around 5 a.m. in the east-southeast and it can be found seventeen degrees above the southeastern horizon as it gets light, shining at magnitude +0.7. The Ringed Planet’s disc will be 15.5 seconds-of-arc across while the Rings are 35.2 seconds-of-arc across and they will be tilted down 18.0 degrees with the northern face showing.

The King of the Planets rises forty minutes later, shining at magnitude -2.0. It is moving eastward slightly faster than Saturn in eastern Capricornus. At midmonth, Jupiter’s disc will be 33.7 seconds-of-arc across. As it gets light, Jupiter is 12 degrees above the east-southeastern horizon.

Mercury is in Capricornus between Jupiter and Saturn as the month begins. It is moving eastward and passes Jupiter on March 4, continuing eastward into far eastern Aquarius. At midmonth, Mercury’s disc is 6.3 seconds-of-arc across, sixty-nine percent illuminated. The Messenger of the Gods rises around 6:15 a.m. and it reaches six degrees above the east-southeastern horizon as it gets light.

The Sun crosses the celestial equator heading northward on March 20 at 3:37 a.m. when the season of Spring begins in the Northern Hemisphere. The March Equinox (called the Vernal Equinox in the northern hemisphere), has the Earth’s equator stretching in a line from the upper left to lower right as seen from the Sun. This makes the length of day and night equal all over the Earth. The center of the Sun will rise for the first time in six months at the North Pole and it will set after being visible for six months at the South Pole. Spring is almost here and the nights are getting shorter, so make the most of the longer nights and "keep watching the sky"!

Beginning at the End of the Road